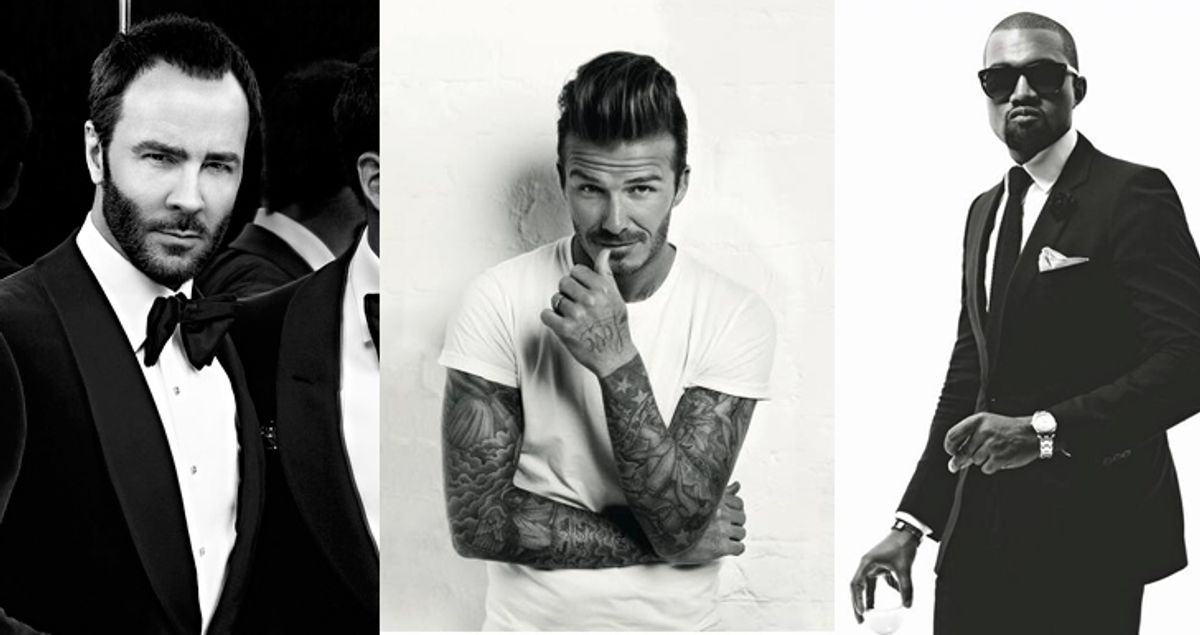 Shop for your dad based on his celebrity double (‘cause he’s totally like Kanye, right?)

Katie Boyle
Alright, let’s call a spade a spade here—dads are notoriously hard to buy for. If yours are anything like ours, your Venn diagram of shared interests can be summed up in a word (food). What’s more, everything they want or need, they’ve already bought. And it’s not like you can roll into Crabtree & Evelyn for a last-minute brown sugar scrub either (sorry, Mom).

Needless to say, in spite of their often ultra-simple wish lists (read: beer and socks), dads are the best and deserve just as much parental-day lovin’ as their other halves. So we thought we’d pay homage to our daddies dearest by channeling some of our favorite celebrity dads and their hypothetical Father’s Day must-haves. Keeping in mind, of course, that your dad probably has no idea who any of the following are—except the occasional offhand reference to “Cane West, yo yo yo.”*

*Granted, this may just be our dads.

Alright, so your dad would probably never be caught dead in a crystal-covered balaclava. And the closest thing he owns to leather jogging pants is a circa-1973 Mick Jagger Halloween costume (long banned by Mom). But there’s something about the way North melted Kanye’s I-go-hard façade into a diaper-bag wielding daddy that we see in a lot of dudes-turned-dads (who knew, underneath the Versace-clad exterior is a total softy?). The Kanye Dad can still enjoy the finer things in life without sacrificing his super-dad status, so opt for aged-to-perfection liquor in a bottle that’ll look great in his at-home bar, a pair of headphones he won’t misplace on a biweekly basis, or some statement man-jewelry to compliment his killer wardrobe (we repeat: not a balaclava).

Buy Now
Buy Now
Buy Now
Buy Now
He’s the dad who’s never missed a Little League game, who played backyard goalie well past your bedtime when you needed to perfect (read: attempt) your free kicks, and who didn’t say a word when you promptly abandoned all of the above in favor of ballet slippers and bracelet-making. The Beckham dad is a purveyor of good, clean/sweaty fun, so workout gear, anything that falls in the normcore category (he’ll wear it unironically, but whatever), or a fresh pair of sneakers are always safe bets for Father’s Day. But chances are all he really wants is a day of throwback family fun with you anyways, so why not dust off that tennis racket and challenge him to an impromptu tournament?
Buy Now
Buy Now
Buy Now
Buy Now
He knows that Moschino is not a dessert garnish and that Canali is no stuffed pasta. His closet—equal parts lived-in and Lanvin—has always been twice as big (and about five times as organized) as yours, and you’re forever indebted to him for (rightfully) deterring you from choosing the pink ruffly prom dress in favor of something you wouldn’t spend the next eight years untagging. Some would call him metrosexual; you just call him for outfit advice. The Tom Ford dad knows what he likes and where he likes to buy it, so pick up a pair of his favorite sunglasses in a different shade, a stunning hardcover book for his coffee table or a timeless cologne in a bottle nice enough to leave on the bathroom counter.
Buy Now
Buy Now
Buy Now
Buy Now
His outfit choices have been known to raise a few eyebrows, and you’ve only recently forgiven him for that time he showed up to your elementary school play in a neon pink suit jacket. The Elton John Dad is quirky and colorful and you wouldn’t change a thing. His plethora of interests and game-for-anything personality make him the ideal recipient of something unexpected or immaterial—pick up tickets to a jazz band you’ve never heard of for the two of you to discover, take him out for a new gallery opening or surprise him with something wonderfully weird for the foyer (again, sorry in advance, Mom).
Buy Now
Buy Now
Buy Now
Buy Now
You may not be into the frequency with which he posts on Instagram (or use of the hashtag #dapperdad), but you can’t help but admit: his lavish lifestyle is so totally shareable. Plus, you have to admit his outfits of the day are definitely double-tappable. The Disick Dad’s obsessions with planes, trains and automobiles are outweighed only by his adoration of you and your sibs. A slick watch, graphic swim trunks or luxe luggage for his next tropical vacay, or a set of monogrammed loafers à la Lord Disick (monogrammed anything, for that matter) may pique his interest. And if all else fails, just put him in a fast car. Day = made.