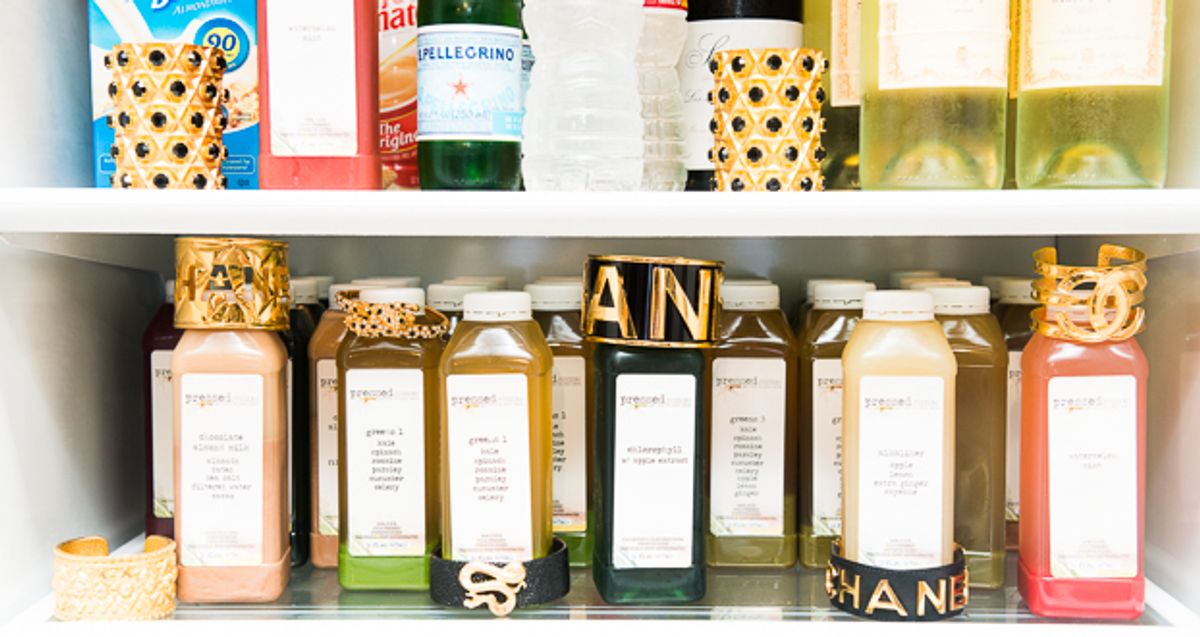 it turns out there are many things that taste better than skinny feels.

So you’re already up to speed on our adventures in juicing this January—and we know you’ve likely been waiting with baited breath (kidding) for our second (and final) update on our experiences so far.

We’re not going to lie: we know we wussed out slightly on the whole only-doing-it-for-three-days front, but it has been rough. The bad and ugly included (and were not limited to): aches, headaches, one actual migraine, gagging and bathroom runs. That said, we were all collectively surprised (shocked, actually) by our general lack of hunger and abundance of energy. Could it be that—quelle surprise—fruits and vegetables are actually good for us?

I’ve always been into healthy eating—I’m the first person to try a new supplement, weird seed from the other side of the world, and I’d live inside of Whole Foods if I could. This wasn’t exactly my first rodeo with green juices, but I’d never done a cleanse before. That said, I also love a good French Fry or barbecue situation.

I’ve always have a longtime history with various stomach aches and pains, and I swear this was the first time in years I went through the day without any discomfort at all! I was amazed with how full I felt and how I felt. I got to a point where I actually craved the juices? What I found most amazing was how I didn’t have any of my usual 3 P.M. crash… you know, when a sudden wave of sleep washes over you and you’re suddenly struck by dreams of watching old Golden Girls re-runs on your couch with a bag of chips by your side. My energy level was high throughout the entire day.

I’m honestly a total convert and would consider doing them on a bi-monthly basis. I think this is a great way to remind yourself to be kind to your body and be mindful of what you’re putting inside it on the regular. It’s also the prefect way to hit the reset button and flush out some of those toxins that build up thanks to late night press dinner, constant travel and nights of dancing until 4 A.M… not that I would know anything about that.”

“I’m pretty much the one person in the office who everyone had their money on for not making it through the three days. Thanks for the vote of confidence, you guys.

After making it through the full three days—without cheating, save for coffee, mind you—I can honestly say that I feel really energized and I might just be a green juice convert. This is coming from the girl who used to gag upon the sight of everyone else’s, okay?! My skin has pretty much never looked better. I also really enjoyed the taste of the almond milk and green juices made with more fruit. I honestly think I will now drink them as a replacement to my typical pop or morning coffee. Okay, maybe not coffee, but, you know. Can I say that it’s giving me the courage to take a step closer to be a healthier person? Baby steps, you guys.

That said, I don’t know that I would do a full cleanse—and definitely not a longer cleanse—again.”

Okay, so I messed up. I made it through day one like a pro –bypassing all signs of hunger, fatigue and all that other horrible sh*t youhear about. I was feeling like a champ and patting myself on the back with vanilla almond milk(shakes) – I was prentending, okay? – as a reward.

HAIM’s “The Wire” went off around 6 a.m. (yes, this is mycurrent mood alarm clock) and sent me shooting out of bed. First stop? The mini fridge. While I was tempted to reach for the Gummy Bears and chocolate covered peanuts, I settled for my Chocolate Almond and suddenly felt a surge of energy. And maybe even a little bit guilt? It's hard to equate chocolate with cleansing but I swear it's all part of Pressed's larger plan.

In a hazy rush, I packed my purse with the essentials – passport, wallet, Babylips, mascara, whatever – and headed out the door with a Greens 2 in hand. It took about, oh, five seconds after calling the elevator that I realized I'd forgotten my "lunch" - make that my lunchbox filled with the day's remaining 4 juices. But I was only going to San Fran for, like, 8 hours? No luggage; just carry-on. So, okay, I cracked. I had egg whites for breakfast at the airport, salad for lunch and some sort of quinoa stir-fry thing for dinner. Cleanse broken. But I felt great! I mean, really great. Maybe it was a placebo effect, but whatever.

Against Pressed's probably (better) judgement, I combined Day Two's leftovers with Day Three and drank all the remaining juices. For the record: That's 10 bottles... and a lot of liquid. And a lot of washroom breaks. But I thoroughly enjoyed every minute of it. Pressed has created the kind of beginner cleanse program that you can easily do... as long as you steer clear of any sign of can't-resist-must-eat restaurants.

As for I how I, uh, toasted to the end of my cleanse? Let's just say it involved some french fries, Diet Coke and cheeseburger from In-N-Out. Can you blame me, though? And I don't care what Kate Moss says: There are many things (read: burgers and fries) that taste better than skinny feels!

“I’ve already come clean on being totally skeptical on the merits of juicing- so much so that when I felt my first bout of crazy, kale-and-spicy lemonade induced energy, I wailed about how desperately I didn’t want it to be working. Because that’s a totally rational reaction, right? Ugh.

I spent the second day of my cleanse feeling equally even-keeled: not a ton of hunger save for a tinge in the mid-afternoon, with no substantial ups or downs or crashes. Everyone claimed I had a glow-y complexion, though that only prompted me to wonder what exactly my skin looked like before the big cleanse.

That said, in the late afternoon and throughout pretty much the entire evening I was super irritable and cranky—not necessarily because of any actual physical symptoms, but more as the result of general missing out on dinner and solid food FOMO. I also spent a good five minutes deeply inhaling the Popeyes my boyfriend cruelly chose to have and actually bring home for dinner.

Truthfully, with the whole cleanse being said and done, I do think I could have toughed it out just one more day… at least, I like to think so.”