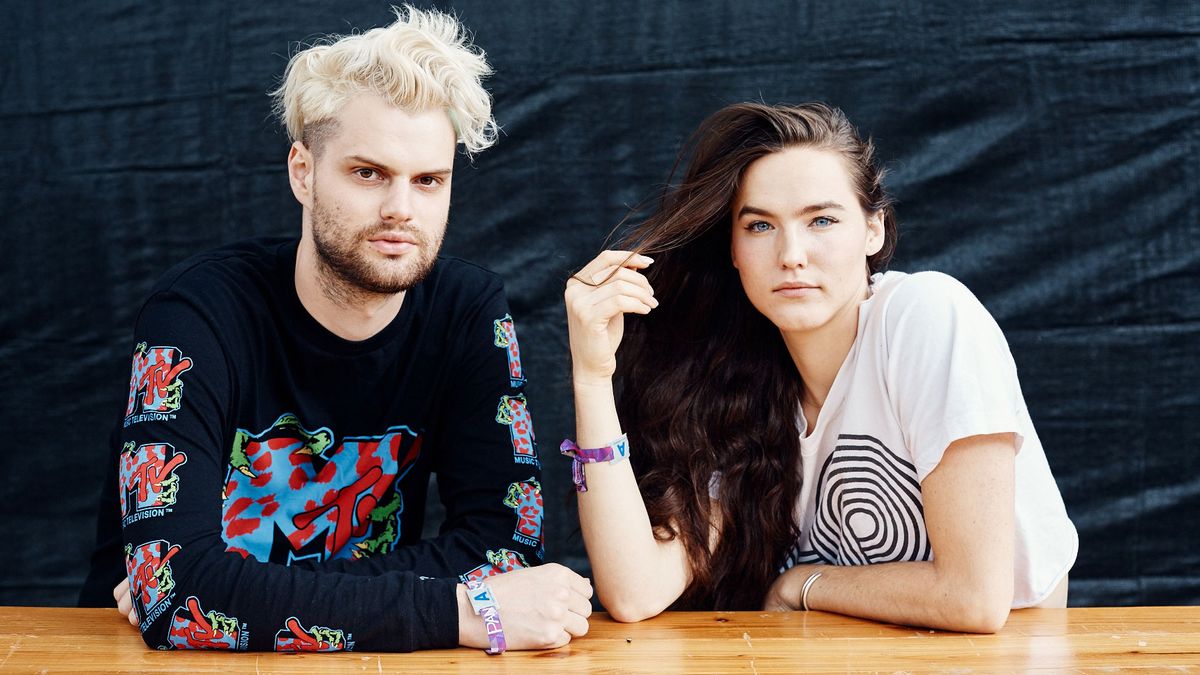 Sofi Tukker is the band we never knew we needed. Comprised of New York-based duo Sophie Hawley-Weld and Tucker Halper, they first landed on our radar when we caught them performing at Panorama. And even though they sing in Portuguese—a language that no one at COV HQ speaks or understands—we can’t get enough; The music’s energy is wondrous, unfamiliar words and all.

During their Panorama set, the pair danced in butterfly leotards and vintage MTV shirts, their hair whipping around under flashing lights. Their moves took them from the stage to the audience and back, tempting the crowd to emulate them. We left the dancing to the band (and the rowdiest fans), but like everyone else, we let ourselves get completely lost in the music. Great decision on our part.

Here, Sofi Tukker talks to us about the reaction they got in Brazil, what it’s like collaborating with poets, and why being dark and mysterious is overrated.

How they decided to start singing in Portuguese:

S: “I think it’s really sexy and I love the way it sounds in music. I learned the language so that I could sing in it, actually. I was singing in Portuguese before I knew the language and then I was like, ‘I should start to understand what I’m saying.’ So I went and studied and spent some time in Brazil and met the Brazilian poets, and now we collaborate with them.”

What it’s like working with Brazilian poets to create music:

S: “I’m not Brazilian and I want to be paying homage to people that really know how to craft words in Portuguese, rather than just take it up myself. And it’s really fun because they know how to have really cool turns of phrases that I would never be able to make up of course, so I love being able to collaborate like that.”

T: “It’s cool for the creative process, too, because we can be making music and something that we really dig, and then she can like open up one of her books of Brazilian poetry from one of the poets that we have a relationship with and we can just kind of riff stuff. It’s really fun.”

They were surprised by their success—and Brazil’s reaction:

T: “We actually were worried about Brazilians. We were like, I more thought—”

S: “We thought it would be potentially offensive. Not offensive because I’d been speaking with the poets, but still, I think the reception’s been incredible. Especially Brazilians have been saying, ‘Thank you so much,’ because usually even Brazilian artists will be using English. But to have the reverse happen is really empowering.”

T: “Going to Brazil was one of the highlights of our Sofi Tukker career, for sure! It’s unbelievable there for us, it’s beyond cool.”

S: “Even in Brazil, on the radio when we were there, we were hearing our songs all the time! The other stuff that was on pop radio was American in English.”

The message they want to get across with their new single “Fuck They”:

T: “I mean, we have definitely been asked to do English versions of stuff and make things sound like songs with verse chorus, and things like that just sort of make it more appealing to the masses. And to that, we sort of just say ‘fuck that.’ But sometimes they’ll give us an idea that really works out. So you never know, but we just always have to love it. We’re also independent in the US so we really get to decide and do whatever we want. As far as our image and aesthetic and stuff, it’s completely on us. We are very us.”

Why being dark and mysterious isn’t always a necessity for new bands:

S: “–Movement-oriented! Fun and happy! We realized early on that we weren’t very ‘cool’ [laughs].”