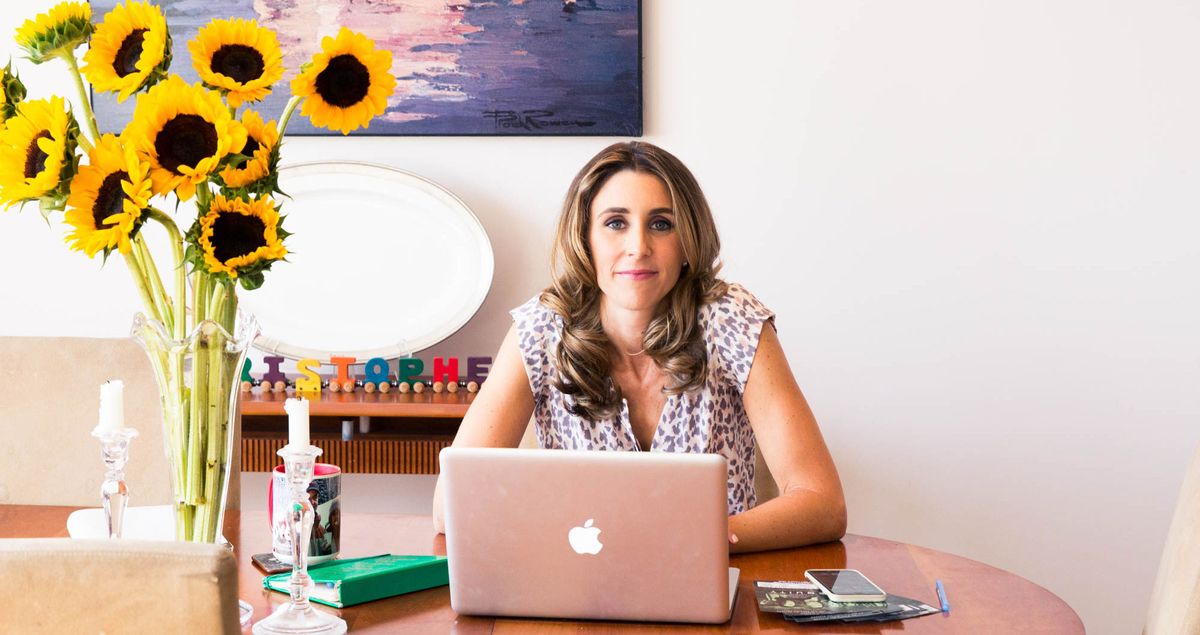 A Master-Class in ‘Doing it All.’

If we were ones for assigning superlatives to the people we cover, producer, actress, and writer Sarah Megan Thomas would most definitely be in the running for “Most Badass.” Having written, produced, and starred in Backwards, a film about “the competitive world of professional [female] rowing” (see: badass), she most recently produced and starred in Equity, which looks at women on Wall Street.

Between breaking into male-dominated industries, debating whether or not anyone can ever really “have it all” (spoiler alert, not really), and the importance of having enough female puppets on Sesame Street (seriously!), we definitely learned a thing or two during our afternoon with her. Here’s what she had to say:

When you don’t see an opportunity, make one for yourself:

“Ever since I was a little girl, I wanted to be an actress. My parents thought it was really funny when I was five, but not so funny when I was fifteen and eighteen and they realized I was serious. I went to Williams College and majored in theater. Then I went to drama school in London and studied Shakespeare, which was a wonderful learning experience. It’s not super-duper practical when it comes to the money making aspect of life, but I came back from drama school and did a bunch of commercials and indie films and a lot of theater. And then really… I was dismayed with the types of roles that I was getting, which seemed very vanilla, and I wanted to start telling my own stories. And we’ve never seen this story about women on Wall Street, and thought it would be a fascinating world to explore as an actress.”

“The film is the first female-driven Wall Street movie, and it follows these two women: Anna Gunn, who plays this hugely powerful Wall Streeter who wants to get a promotion, and my character, the younger up-and-comer who is also vying for a promotion in this world of Wall Street that is post-financial crisis—it’s not something we’ve seen before. It deals with regulations on Wall Street and the grey lines, so not everyone is blanket evil in this film. It’s about ambition, and women who are intelligent and powerful, and what lines you would cross in life to achieve that ambition. Goldman Sachs opened up their doors and let us shadow some real bankers, and several women let me shadow them as an actress.

“There was this one woman who was a VP at Goldman Sachs, and I remember thinking ‘Wow, she’s not wearing a business suit,’ which is kind of how I would envision a Wall Street VP. She had this very flirty skirt that was appropriate but… wasn’t a suit, and this beautiful white top. I took a picture of her and I sent it to our costume designer and we actually put that on my character in the first scene of the movie. The point being that our expectations about what we think WS is, how Wall Streeters dress or behave may not be the reality. It was fascinating to learn things that don’t fit the stereotype.”

“The wonderful thing about movies is they have the ability to reach a wide audience and create a conversation in a way that’s not threatening. Sometimes when you sit down to dinner and talk about politics and you have a democrat and a republican, people get very set in their ways. But if you’re watching a movie, there’s a dialogue you can have. And my goal with this movie was that you just watch it for the thriller it is, but then you leave after and say, ‘Huh, that was written, directed, produced and starring women—why aren’t there more films like that?’ and also just ‘Hm, that Wall Street world, why don’t we have more women in powerful positions?’”

Creating more roles for women in film and TV, and why it’s so crucial:

“I really think it’s about trying to make 50% of the speaking roles, whether it’s movies or television, female. There’s just—if you look at the breakdowns—a lot more opportunity for roles for men; why can’t the doctor of the law officer or the policeman be a policewoman? Geena Davis has done a lot of great studies on that and she presents the numbers. For example, on Sesame Street, there were more male puppets than female puppets and they petitioned to get more female puppets. It was really expensive to make a puppet—I’m not making this up—it took a lot to get more female puppets.

“I’m a mom to a boy and I want him to grow up supporting strong women. We don’t realize that our kids, the images they see, if they see eight men and two women for every scene, they automatically think that women are a minority because that’s what they are presented with. So to me it’s just about whether it’s the producer, director, or the writer in entertainment, consciously going through their projects and being like, could that role be a woman?”

On the lack of women in positions of power, and the ‘Boy’s Club’ mentality:

“It’s a really complex issue on why there aren’t more women in powerful positions in Wall Street, in politics, in entertainment. It’s a broader question that we need to address as a society. I think on Wall Street, something happens when women have children—there’s a drop-off rate, and we actually incorporated that into my character. My character is pregnant and hiding it because she wants a promotion, and she knows that if she tells her female boss she may not get that promotion. So we explore that a little. I don’t think that it’s outright sexism on Wall Street; I think it’s just a boy’s club and how do you change that? And I don’t know the answer.”

On producing *and* acting in a film:

“I love creating stories, I love that as a producer and actress, you get to develop the role you want to play. My character is definitely a little dark, and a type of women I don’t believe we see a lot of on screen, so that was a lot of fun to create. To be able to say, I want my character to be pregnant and hiding it, you know, if you’re a producer you can do whatever you want in that regard. But also the nice thing about producing a film is that you have the journey from the beginning to the end. As an actress you show up and you do your job—your part in the puzzle—and you leave. But as a producer, you have a creative say, input, the whole time, on the final cut, on how it shapes, on who you hire. And we had a great team on this movie so that was awesome.

How she’s like her character, and realizing you can’t have it all:

“I’ll tell you how [I’m like my character]: she’s very ambitious, I think I’m very ambitious. She’s very competitive—I have a sports background, I’m very competitive. And I used to be like this: she truly believes she can have it all. here’s actually a scene in the movie where she’s looking at this article about women having it all and she truly believes she can have the baby, be powerful, and be married, all at the same time and she starts to learn that life is a lot more complicated and she has to make difficult choices. And when I grew up, and again, because I grew up in sports with Title 9 and everything felt very equal, I very much felt like I could have everything at one time and then you start to realize that life is more complicated and you have to make choices about what is more important to you in each moment.”

A lesson in ‘just doing it’:

“Just create. There are so many ways to create. You can create for YouTube, you can create for web series, you can create your own short film, you can create your own feature film. I think a great example is Meera Menon, who is our director for this film. Before this, she made her own feature film that she raised the money for on Kickstarter. It was under $100,000, she got into Tribeca [Film Festival], she won all these awards. I saw that film and while, yes, it was a low budget film, I saw her potential as an incredible director, and had she not created that piece of art, she would not have directed Equity because we wouldn’t have been able to see what she can do. So don’t wait for the job offer to come to you, create the art you want to see.”