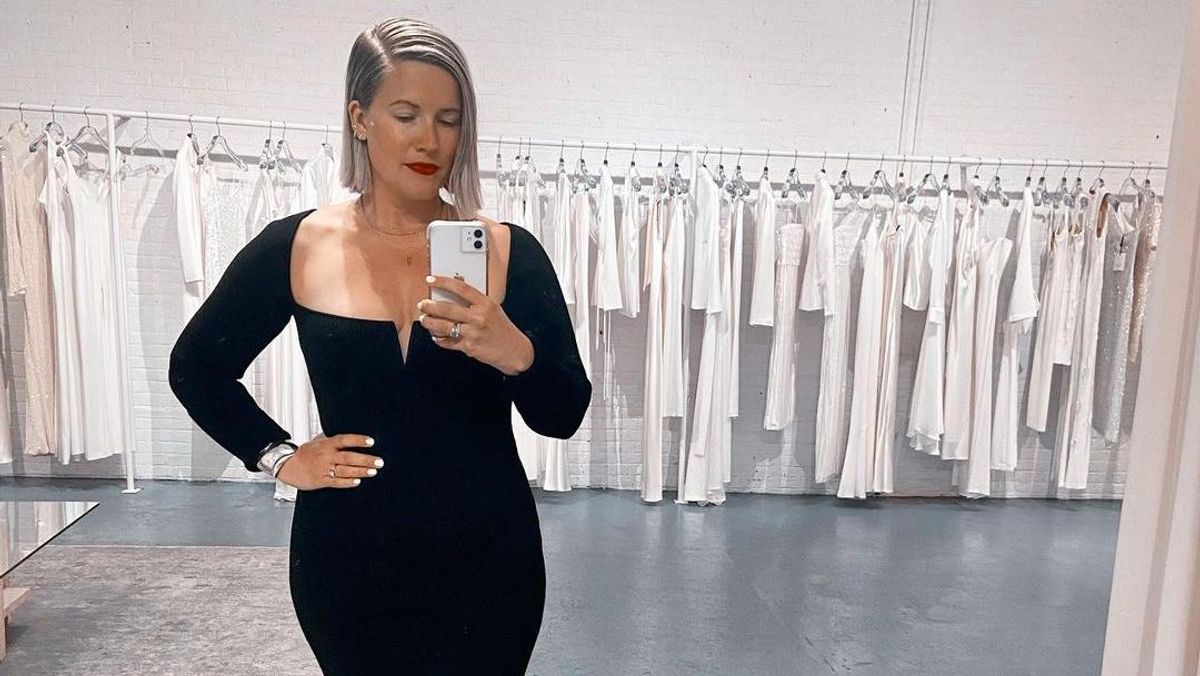 No, you don't need a "post-pandemic body" to wear what you want.

Fashion publicist Sara Larson runs a thriving PR agency and is also the mother of two young children. Ahead of the pandemic, she was in the belabored process of getting back to that pre-pregnancy body, the heavily fashion-induced ringtone of "I've got to get back to a size four" chiming in her head. Like most of the world, Larson found herself homebound last March—amidst working full-time whilst attempting to parent (and homeschool) her two young children. Working out, along with the corresponding body- image preoccupation, was the first thing to go. "You go into survival mode of struggling to take care of everything—kids, career, all of it!"

Along with many women, Larson reshuffled her priorities during the pandemic, making a conscious decision to at least attempt to silence the constant negativity around her own body image and finding that mentality reflected in her clothing choices. She placed an order from one of the brands she represents, Galvan, for a body-conscious dress out of their newly launched power knits collection. "I ordered this dress in the middle of COVID-19 and was like, 'Oh my god, I'm really not going to be wearing this skintight thing.' I put it on and I just felt so good, so I took a photo and shared it and everyone was so complimentary; I was floored."

The idea that this was so shocking points to the deeply ingrained patterns of self-criticism we all possess in varying levels. The pandemic tested even those with mostly secure relationships with self-image. The idea of your "post-pandemic body" mimicked the physical and mental battle most women face after pregnancy, tinged with the detrimental energy of a New Year's resolution. According to a study conducted by David Frederick of Chapman University, 48 percent of female respondents said [the pandemic] contributed to negative feelings about their weight.

Then, amidst all the negativity, something changed this summer—at least for some. A movement towards freedom from the shackles of insecurity emerged, expressed outwardly through fashion, (controversially) noted in the New York Times by Guy Trebay as "bare season." Along with simply wearing less clothing, body-conscious silhouettes which celebrate the female form versus attempting to alter it through padding, darting, and boning are trending.

After spending months clad in all sweats, chef and author Daphne Oz found herself aboard the pendulum swinging away from shapeless garments, as well. "It's funny because you wear it differently," she says of the body-conscious silhouette in relation to its early 2000s modelesque connotation. "It's not like there's the same humps and bumps in all the same places, but you've seen those women who are not a classic [media-imposed] body type that body-con is made for, but who wear it better than anyone else. That's what I aspire to."

After battling harsh media criticism of her body throughout her 20s and early 30s, Oz had a reckoning with this idea of not only what confidence looked like, but what it meant to look and feel sexy. Amidst the pandemic, "I gravitated so much to looking at these old icons of sex and glamour and total femininity, and none of them were in this tiny, small form. I really started leaning heavily into what it is about a woman that makes her look confident, makes her look empowered, makes her look like she feels good about herself. It's a way that you carry and support yourself, it's how much you feel you have to offer."

In fashion, there's often a double standard with the idea of dressing sexy. Depending on your body shape, the societal standards are different; those with slimmer or less stereotypically feminine forms can often get away with more. Author Danielle Prescod, who distanced herself from the fashion industry for many reasons, only one of which being the refusal to adhere to a realistic portrayal of women's bodies, has publicly shared her journey with body image on social media as she settles at a weight that is healthy and sustainable for her. "I have definitely new aspects to my body which, when accentuated, could skew a little bit more risqué," she tells Coveteur. "It was a real struggle for me to figure out what I should and should not wear for professional things," asking the question that so many have asked: Will I be taken seriously if I wear this?

Reflecting on fashion's most recent haute couture fashion week, Prescod acknowledges that its dominance on social media still begrudgingly promoted this dated, even distasteful physical idealism. Instances like this reiterate that the mental and sartorial reversal around image is not easy. "Fewer layers not only means more exposure for your body, but also more exposure to your body, so it can be a really tough time for people struggling with body image," further emphasizes body positivity advocate Katie Sturino, who popularized the hashtag #supersizethelook via her Instagram. That's why it's "the perfect time to re-evaluate and embrace our relationship with our bodies."

"It's your body," Oz states matter-of-factly. "This is your body now." And motherhood redefines this relationship even further. "Being pregnant, you're completely out there. Your stomach is growing a human and you want to show it off," adds Larson, who is leaning into silhouettes that celebrate the female form more than ever. "I feel like I actually dress sexier now than I did before kids. I've grown two beautiful children in my body, so it's really about embracing that."

"I think that's really what I'm seeing in terms of why I feel better in my skin now than I ever have before, is that I've shown up for myself," reiterates Oz. "I've invested in myself in a way that gives me confidence. That does reflect in my fashion sense."

"I really started leaning heavily into what it is about a woman that makes her look confident, makes her look empowered, makes her look like she feels good about herself. It's a way that you carry and support yourself, it's how much you feel you have to offer."


The fashion component simply served as the outward depiction of an internal shift. According to fashion psychologist Carolyn Mair, "For someone who's confident about who they are and about what they have to say, then what they are wearing does become less important."

Like so many aspects of modern society, saying these things out loud sounds almost foolish. Of course you should wear whatever you want regardless of the scale, but that's often much easier said than done. "You don't want to admit it because it feels so superficial to be concerned with your body," says Larson, "but the only comforting thing is I know that I'm not the only one.

"It's almost like faking it until you make it in your body," she continues. "It's like, 'OK, cool, I'm going to embrace my body and just be proud of it and it will inspire other people to do the same.' There's nothing that wears better than confidence."

How the Resale Economy Changed the Way We Shop Trends
The Mentality Behind Our Style This Summer
Found: A Dress That Feels Like Pajamas