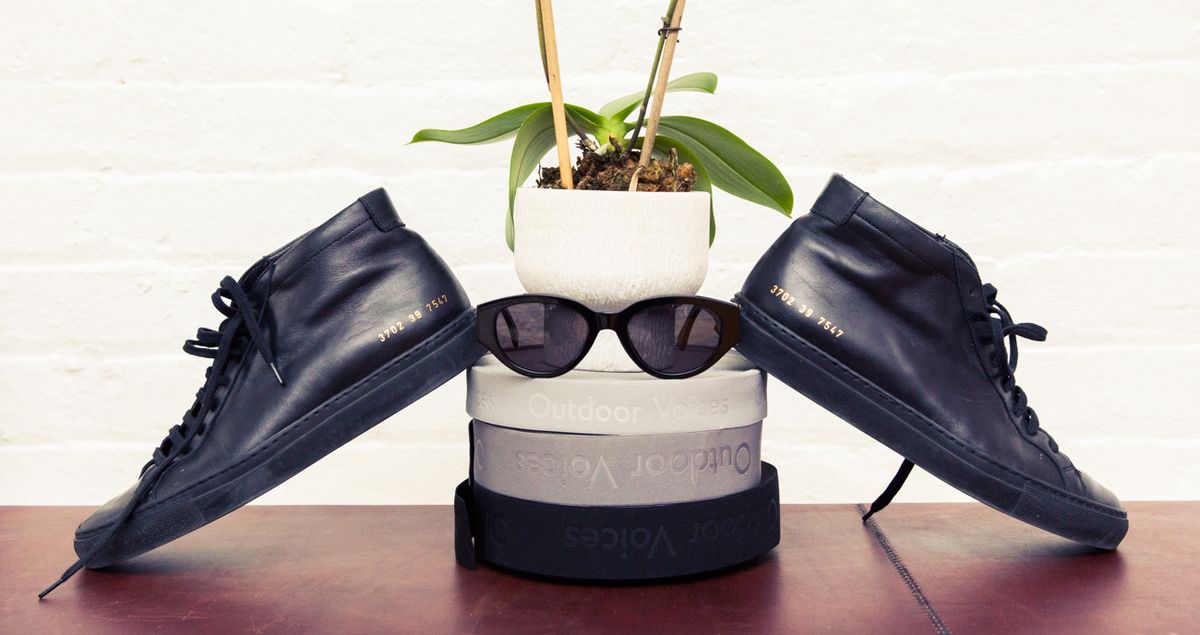 The most genius, why-didn't-I-think-of-that ideas that eventually go on to birth brands usually come from glaring holes in the marketplace. C'mon: how painfully obvious does a social platform solely for sharing photos seem in retrospect? In the case of Outdoor Voices, the activewear brand made up of technically-minded pieces that achieve the seemingly simple goal of looking cool rather than slathered in slogans; you'd think the ubiquity of all things health-minded would have a million brands nailing exactly that by now. Don't believe us? Just look at all those pressed juice spots. But somewhere along the way, aesthetics seemingly went right out the window, with competitors preferring to go the route of all things, "black and neon and perforated," as OV founder Tyler Haney told us. In rejecting the whole harder-stronger-faster thing in lieu of a more balanced approach to overall wellness, Haney hit a goldmine with her brand of activewear for the more Acne-and-APC clad crew.

Having created and launched the brand right out of Parsons, going on to raise just under $10 million in funding and collaborate with J.Crew and APC, think of Haney as the poster girl for the brand she's built—we'll be damned if you don't come away from this running to stock up on OV's sleek legging-and-crop-top kits. We did.

“I grew up in Boulder, Colorado, which is a real outdoorsy town. The city’s whole approach to activity kind of reminds me of Outdoor Voices. Your social outing is hiking with your dogs, you bike from place-to-place, there’s less of a separation between your gym life and your life-life; so I grew up with that mentality.”

THE EXCLUSIONARY FEEL OF OTHER ACTIVEWEAR BRANDS:

In high school, I was super active and was wearing brands with the credo, ‘Harder, Better, Faster, Stronger’; but I felt like there was something missing in the market that truly captured being feminine and athletic, and the powerful combination that can be. Everything felt very macho and manly and kind of exclusionary in a way. Like you had to be a certain type of athlete to be active.”

WHY DESIGN IS AT THE FOREFRONT OF EVERYTHING OV DOES:

“I was meant to go to school for track and decided I didn’t want to pursue it. I made a U-turn and came to New York for college. While in school, I still had this feeling that I wanted to create a brand that approached activity differently—with moderation, ease, and delight—and celebrated activity rather than thinking about it as performance or competition. I [also] couldn’t find product in the activewear space that resonated with me in the sense that, I was wearing Acne Studios or A.P.C. Brands that thought of clothing as a uniform. Everything on the market was black and neon and perforated so, I started Outdoor Voices.”

ON COMING AFTER THE LULULEMONS OF THE WORLD:

“I ended up going to Parsons Design School for Business and while in school I became obsessed with technical materials, what made something sweat or managed moisture. While in school, I had these products and this idea for positioning and realized the opportunity was there.  I found the mills that Lululemon and Nike were working with and went to them and said, ‘I’m sick of the shiny black spandex—I want to create a material that functions the same as this does, but looks textured and can be tonal’. Something that looked aesthetically more in line with what I was wearing in my everyday. From here, I created a five piece set of what I called my ‘active uniform’—the best fitting essentials. We still to this day sell kits online, it’s one of our top sellers.

I wanted to be hot on the heels of Lululemon and very much create a brand around recreation and social, fun activities. It’s been two and a half years and Outdoor Voices is live, and real, and I’m very much wanting to be the next great activewear brand - and so that’s very much my vision for it.”

“The moment that Lena Dunham was wearing our Man Repeller kit last year was really awesome because for her to be the first public persona in Outdoor Voices was great. It goes really nicely with our positioning. We’re making clothes for people that are active, but not defined by it, so that was a beautiful moment for us.”

ON THE MOST CHALLENGING ASPECT OF SCALING A BRAND:

“I think it’s the team. That’s the most challenging aspect, but also the most rewarding. In October we were eleven people, fourteen maybe—and now we’re close to thirty. With this being the only place I’ve really had a career, I haven’t seen that structure. Understanding how a team grows with this kind of expansion has been difficult, but finding really experienced people and plugging them in is has been really helpful.”

“I go to the Smile to Go here in New York probably two to three times a day, starting with coffee. I have Dimes Face Mist that I apply all the time—it’s really awesome. They’re good friends with the brand as well so we go there for meetings. We go to Sky Ting Yoga once a week—it’s super nice to get away from the office for an hour once a week with the team, so I do that. I have this lip balm that I have with me constantly, Olio E Osso. I also just finished reading the Arianna Huffington's Thrive book and I have that, and I’ve been passing that along to all of our people on the team.”

“I try to go to The Class by Taryn Toomey. I get up and walk down—I try to do that two to three times a week and so that really gets you up and moving. Then I go home. I live really close to the office and the shop so my commute is not very long. I get both the Wall Street Journal and the New York Times and so those are my go-to [morning reads]. I have a dog, so then I take him for a walk and then go to the office. He’s the office pup! Then I generally would meet with the product and the art department team in the early half of my day. Lots of meetings. Then I frequent this place called Lovely Day, or Estella for dinner, after work.”

“A friend of mine, from Sweetgreen told me that in Chinese the symbol for opportunity and crisis are similar, and that his Dad once told him, ‘never waste a crisis’. Meaning something can be the worst thing that happens, but you have to flip that. It’s truly an opportunity to fix something, or to go above and beyond. I keep in the back of my head every single day.”

WHAT’S NEXT FOR OV:

“We’re hosting a national dog walk, the OV Dog Jog, at the end of May. You register yourself and your dog, you get a bandana, and to me, it’s a three lane race. For OV as a brand, to me, dog walking is just the epitome of recreation! It’s fun, it’s social, it’s outdoors, and you’re happy! That’s our first proper event that we’re throwing that we’re really excited about—it starts in Austin and then we’ll do it in L.A. and New York. We also have a collaboration with A.P.C that just launched at New York fashion week. I’m really excited for that one.”

THE WORDS OF WISDOM SHE’D SHARE WITH ANYONE WANTING TO WORK IN FASHION:

“This one kind of stuck with me from the Arianna Huffington book: you can never connect the dots looking backwards, so you might as well assume that things are rigged for you going forward.

And then something that I always talk about is changing the chemistry. For me, sweating everyday is important, because it changes the chemistry of your body and therefore, your mind. It allows you to think differently and relate to people in a better way. Whenever someone in the office is stuck on something or having a hard time, I’m like, ‘change the chemistry!’ Sweat, do a handstand, something for your body to clear your mind!”