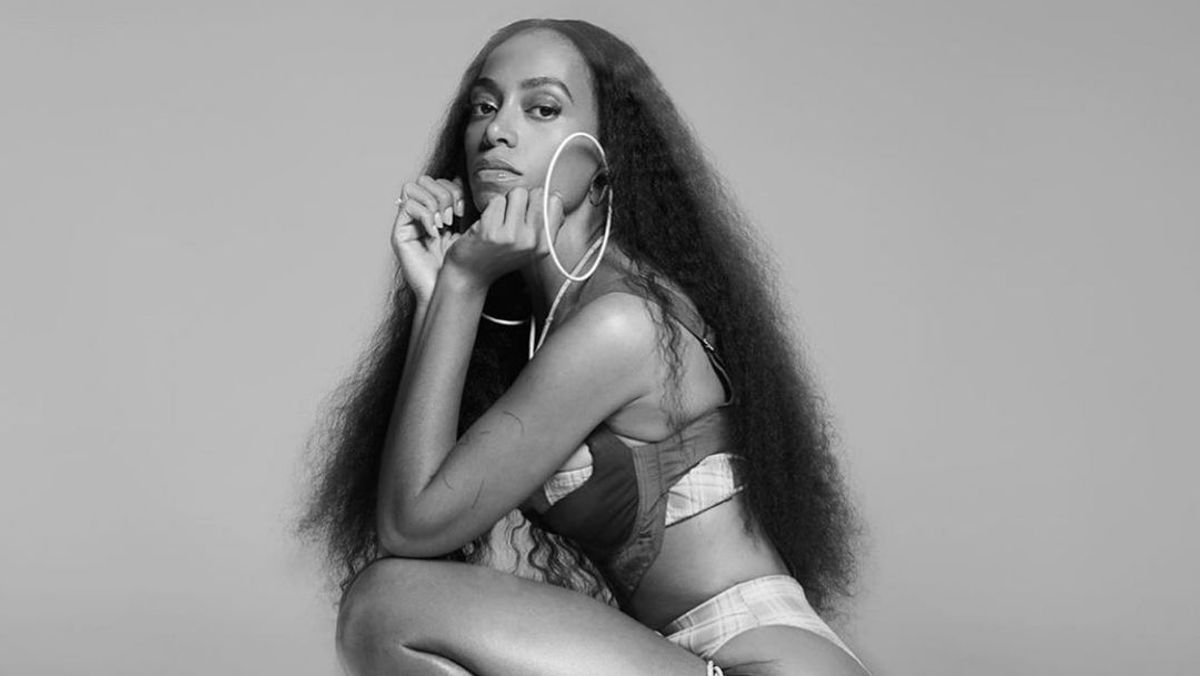 Nateisha Scott
In the spirit of Black History Month, it’s only fitting that we discuss (and celebrate) the complex history of Black hairstyles. Black hair is multifaceted and rooted deep within the DNA of Black identity. Highly symbolic, it is not only an important form of self-expression, but is also connected to the socio-cultural aspects of our history—a practice that dates back to traditional African societies in which hair indicated everything from your age and religion to social rank and marital status. This shapeshifting ability remains a crucial part of modern Black culture and has led to countless iconic moments throughout history in the United States and worldwide.

As early as the 1600s, braids, cornrows, and plaits were used as a way to tame and maintain Black hair (as hot combs, oils, and natural hair recipes were lacking at the time) when slaves worked the plantation fields. The French invented hot combs in 1845, and they arrived in America in 1880 (15 years after slavery was abolished) as a means to straighten and “tame” Black curls and coils—this is when the term “good hair” entered the American lexicon.

In the early 1900s, Madam CJ Walker and Anna Turbo Malone kicked off the Black hair-care boom, making products designed specifically for highly textured hair—businesses that would eventually make them both millionaires.

The year 1930 saw the exile of Hailey Selassie, crowned Emperor of Ethiopia, and as a sign of respect, guerrilla warriors vowed to not cut their hair until he was freed. Over time their hair became matted and formed long locks. Coupled with their feelings of dread and fear, the term “dreadlocks” was born.

In 1954, George Johnson created the Ultra Wave Hair Culture for men and women. Nine years later, in 1963, award-winning actress Cicely Tyson wore cornrows in the show East Side/West Side as an ode to Black hair prior to slavery. The moment was significant, as it demonstrated how beautiful Black hair was without needing to conform to straighter, more Eurocentric styles.

In 1968 Diahann Carol starred in the television series Julia and sported smooth curls that Black women soon adopted in professional settings. But it wasn’t until the civil rights era in the 1970s when key figures such as Angela Davis and Malcolm X ushered in the new wave of freedom regarding Black hair. The birth of the Afro was symbolically, politically, and culturally tied to the idea of Black self-love, intellectual historical knowledge, and Black power.

These styles continued to shapeshift into the late ’70s early ’80s with the Jheri curl and high top fade, adopted by men who often buzzed African symbols, logos, or partners’ names into their scalps—a new means of self-expression via their hairstyles.

In the 21st century, we’re seeing more natural and traditional hairstyles on the covers of major magazines and on the red carpet (although Zendaya’s dreadlocks at the 2015 Oscars sparked racist comments from the Fashion Police host, Giuliana Rancic).

While the beauty industry has long overlooked traditionally Black features in favor of European ideals, the transformative nature of Black hair has kept our history alive, and it continues to prove just how significant these moments and hairstyles are on American culture as a whole.

That’s why we decided to reach out to some of the beauty industry’s leading Black hairstylists to hear about their favorite moments in hair history, as well as learn a few childhood memories and the products they can’t live without.

Photo: Courtesy of Larry Sims
What would you say has been your favorite Black hair moment in history?

“I probably would say my favorite moment is the Afro. We hid our textures under those straight, fancy wigs—think about music icons Diana Ross and the Supremes and Aretha Franklin. But then, in the late ’60s and ’70s, there was a cultural shift with Angela Davis and the Black Panther movement, and hairstyles transitioned into the Afro. Textured styles became our pride that we really embraced. The world felt the shift, and this iconic look continues to empower our Black community. This is us.”

From your own work, what looks carry a fond memory?

“Well, Lupita Nyong’o, when I styled her for her Oscar win of 12 Years a Slave in 2014. Sanaa Lathan in Nappily Ever After—we did the big chop for her as part of the movie. And working with my longtime friend and client Gabrielle Union, and now my business partner, as we develop Flawless by Gabrielle Union. A true moment for us was when we shot the cover of Women’s Health in September 2020 with her natural tresses, [since] for years previously Gabrielle had worn extensions on shoots.”

“I used to find joy sitting in urban beauty salons for hours watching transformations. That’s how I really started to get into the anatomy of transformation. These women would come in looking a certain way, and then would walk out with a pep in their step. The transformation and also the confidence they would have after leaving the salon would be completely different. Reflecting back as a kid, I thought stylists were magicians.”

“They would have to be Flawless by Gabrielle Union Detangling Leave-In Conditioner, Hydrating Curl Refreshing Spray, and Shine Enhancing Heat Protection Spray. They are infused with exotic, hydrating, and protein-rich ingredients such as bacuri butter, Brazilian bacuri butter, coconut oil, perfect for moisturizing textured hair.”

Photo: Courtesy of Kendall Dorsey
What hairstyle would you say has remained iconic in history?

“The moment for me was when you saw textured hair and rollers—the volume and body was beautiful. You had icons such as Diana Ross and Diahann Carol wearing their textured hair before anyone else, and it truly was, and still is, a moment. The hair was frizzy, uncontrolled, but true to its natural beauty. It shifted the idea of hairstyling forever.”

“Two moments stick out to me specifically: the visual album When I get Home with Solange, and working with Yara in Paris for CHANEL. With Solange, it wasn’t just about the hair, but the whole soulful experience. It truly connected to my heart—a 30-day project shot in the heart of Texas. It celebrated the history of what hair truly was in the ’80s and ’90s. From the church house to the gathering with friends, it symbolized and cherished the cornerstones in hair. With Yara, she was 17 at the time and was, and still is, a force to be reckoned with. Fresh-faced and youthful, we wanted the hair to echo that, and so we played with a really slick look with two clean twists back to complement her youthful complexion.”

Is there a childhood hair moment you often think about?

“It all started in the church for me. I remember a lady, Ms. Jackie, who would always wear her hair in a large but glamorous style. It was the first time where I really connected beauty with glamour. It not only connected hair, but it also connected fashion and beauty overall.”

“I would have to say Dark ‘n’ Lovely Cleansing Water—it’s a staple in my kit, and as fast-paced as my job is, it’s important that I am able to work with a clean base. Dyson Supersonic Hair Dryer. The technical evolution is fantastic and the only tool I trust. It’s built with ions and it doesn’t damage the hair like traditional hair dryers do, and it’s super lightweight and easy to style with. And Ouidad Humidity Control Gel. It’s perfect on textured hair, whether I’m setting curls on Yara or slicking a ponytail for Alicia. It really can do anything.”

Photo: Courtesy of Lacy Redway
Tell me about your ultimate hair moment in history.

“Grace Jones’ iconic fade! I also grew up in the ’90s, so seeing Missy Elliot’s shiny finger waves, Salt-N-Pepa’s asymmetrical bobs, Janet Jackson’s braids in Poetic Justice, Lisa Bonet’s locs on The Cosby Show, and Allen Iverson’s cornrows—it was so cool to have lived through that time. So much of ’90s culture influences me.”

Is there a standout memory from the incredible roster of clients you work with?

“Some of my most favourite moments in the recent past [are] Tessa Thompson’s hair whip at the 2019 Met Gala, Zazie Beetz’ look at the Oscars in 2020, and Kiki Layne at the Critics’ Choice Awards.”

Could you share a childhood hair memory that you still treasure?

“When my sister would wash my hair on a given Sunday afternoon, I remember sitting in front of her while she styles my hair in Bantu knots, all to help stretch my hair while it dries.”

Three products that remain permanently in your kit?

“Right now I’m excited about Nexxus Curl Define Shampoo and Conditioner. It helps me keep the foundation for the hairstyles I give myself, and it locks in the moisture before styling. Innersense Harmonic Healing Oil—I love that you can use this on your hair and your skin. And finally, Flawless by Gabrielle Union Heat Protection Spray. A lot of people are starting to experiment with their hair again, especially anyone that participates in virtual meet-and-greets. I think it’s important to remember to protect our strands from using too much heat on them. This heat protector works great before using hot tools in your hair.”

What to Expect After You Begin Transitioning to Natural Hair
I’m Lazy about Caring for My 4C Hair, but These Products Make It So Easy
The Future of Beauty Is Powered by Artificial Intelligence—But Is That a Good Thing?
Part of the series: