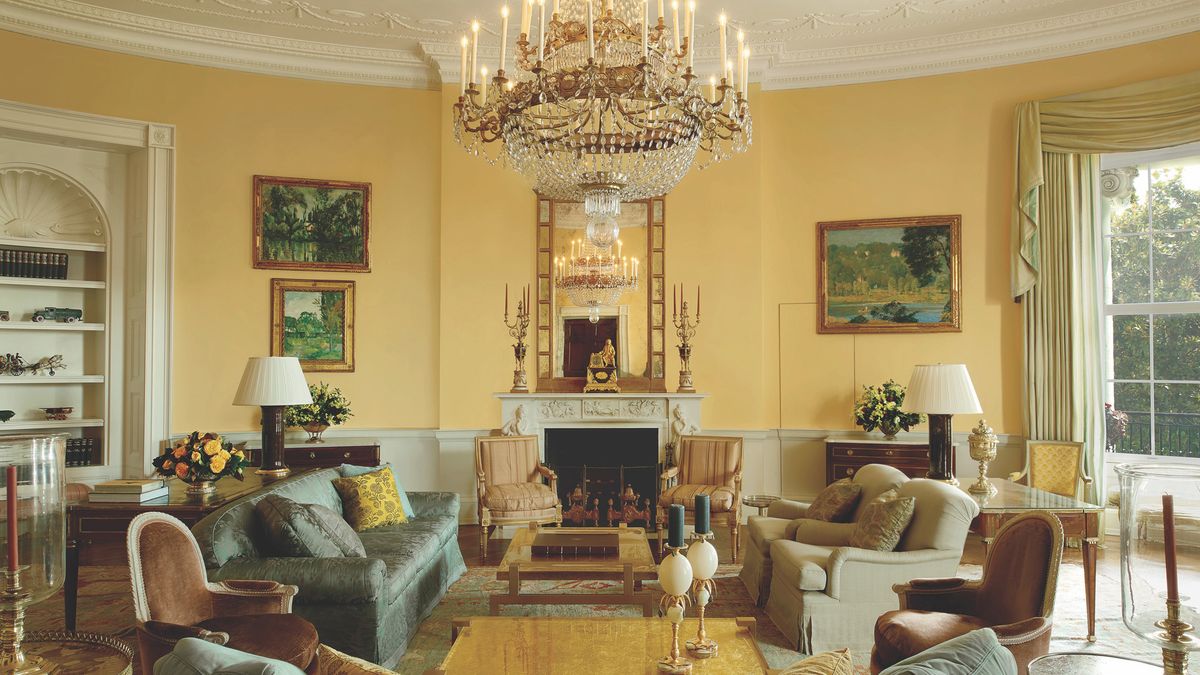 Michael Smith gives us the inside scoop on his tenure with the Obamas.

Camille Freestone
When it comes to interior design, Michael Smith is no stranger to high-profile clients. His impressive résumé includes projects with Cindy Crawford, Steven Spielberg, and Shonda Rhimes, to name a few. Throughout the years, he learned they all require a certain level of privacy, discretion, and an insane attention to detail. Then, in 2009 he was commissioned by the Obamas to update none other than the White House—probably the most major interior design gig in existence.

Since WWII, it has become customary for each president to leave their mark on the White House in some way. Because there is so much history, so much beauty within the commemorated space, the interior design is a bit of a puzzle; how to modernize without fundamentally altering? A notion that Smith, a self-dubbed student of history, was extremely conscious of. “It’s still really surreal,” explains Smith. “You’re always aware of the weight of history. Always.” Not to mention, a sitting president will only live there for four to eight years, so you’re on a time constriction. Then layer on the added fact that it is the one of the most photographed, documented spaces in the whole country.

Smith not only understood all these factors, but also recognized that when the Obamas entered the White House, they were first and foremost a family with two young children. They needed to be able to not just live, but feel comfortable in the space they called their home. We caught up with Smith to discuss collaborating with the Obamas, working with history instead of against it, and *subtly* modernizing “America’s house,” which you can read more about in his new book, Designing History.

Photo: Michael Mundy
So you are approached to design the White House. Where do you begin?

“I think you start by doing a lot of research, which is what I did. I wanted to understand what had come before, who had done what, and to really understand context more than anything else. I think that was the most important thing for me, initially, was to kind of just do all the research so I would know what’s happening.”

Can you speak to the Obamas’ design sense?

“It’s sort of what you think it would be. They’re super relaxed, super respectful of history and of what had come before. The whole mandate with Mrs. Obama was How will this work for our family? And then how will it work for the next family and the next family after that? I think that there’s a tradition with presidential families, there’s a spirit of stewardship and understanding that you’re only going to be there for four years, hopefully eight years, and in that time you want to be comfortable. It’s America’s house and everything you do hopefully makes it better for the next president—the way that the Bushes left the house in really beautiful shape for the Obamas.”

With a place with so much history, what do you have to keep in mind when you’re doing the design?

“I think you want to be mindful of it, but it depends. I mean, certain rooms like the public rooms, you’re more hyperaware of not upsetting what’s happened, but kind of adding to it and maybe tailoring it a little bit. With the upstairs rooms, there was a lot more leeway. They’re more personal for the president and for his family. But again, you’re just conscious. Anyone who is a student of history, like I am, is obsessed with trying to stay in the lane of history. Then to do two little girls’ rooms when they moved into the White House, you have to make them cheerful and kid-like, but still keep them in context where they feel like they’re in the White House. That was the thing that I really wanted to achieve.”

Photo: Michael Mundy
Were there any great historical pieces that you were able to work around and build into the space?

“Everything was essentially historical, so it’s all really good. I think the great thing is we used this bed from the White House collection which we re-curtained and updated for their bedroom. Every room had some amazing piece of furniture. There was a room that used to be President Kennedy’s bedroom that we made into a sitting room for the Obamas. It was a different plan for the room, but it had the same chest of drawers that had occupied the same wall when it was President Kennedy’s room. That kind of idea is really wonderful.”

Working in a space with so much history, it can become museum-like so quickly. Was there any way that you tried to make the interiors a little more approachable?

“I think the big thing was trying to figure out how to bring in contemporary art, because by bringing in modern art, it really made it feel personal to them and really, really interesting. There’s a huge list in the book about it. I think it was really interesting that we could borrow work from various museums, which was great. It was a huge resource to have because you could really quickly make it something that was personal. We just knew that by putting big contemporary paintings we could make it more colorful, make it brighter and just lighter and younger.”

In a house with so many traditional elements, how much do you modernize it?

“I think we pushed it. Again, the contemporary art was really pushing it, but that was the big gesture. They were huge paintings since the rooms are so tall. There were elements like 20th-century coffee tables and other things that add a sense of modernity to the space. I also think you want to keep it really simple. Again, four years or eight years is not so long, but it’s long enough that you want it to feel comfortable. You want rooms to be simple enough and flexible enough that it all worked with what was there.”

Photo: Michael Mundy
Were the Obamas super involved in the design process, or did they just hand it to you and let you go?

“They were involved, but they were super busy. The business of government sort of took a lot of time, but they were very good communicators, as you can imagine about what was important to them. Again, like all my clients, I really tried to listen and be very mindful of what they were looking for and how they needed it to function for their family.”

Obama’s Oval Office is one of the most photographed places ever. What was the process like designing for it?

I know you had to be cognizant of budget, as the Obamas paid for most of the additions themselves, so where did you shop for furniture?

“Over the years of having worked for all these different vendors and craftsmen, I have such a loyal group of people who would do stuff for me at a cost that I could afford but also were really discreet and mellow about avoiding the press. I think that’s why I turned to the people that I really knew and trusted the most, who I had worked with for long periods of time on other projects.”

Photo: Michael Mundy
You’ve had such an extensive career. Was there anything you were able to learn from the process?

“Oh my god, I learned stuff every day—just the scale of everything, the complexity of it and what was needed, the history of things, and just to be thoughtful. I think that the number one thing that the Obamas inspire in everyone is to be thoughtful and mindful of every aspect. Who made it? How much does it cost? To have people who made things where you knew it was really going to be impactful. It was going to mean something that they had made something for the White House. I think that was a big part of the job and something that was so satisfying. People were really proud of what they had done for America’s house.”

You talk about incorporating the Obamas’ more progressive view into the space. How do you do that through design?

“Well, I just think this idea of trying to get as many different people who hadn’t been in the White House before—craftsmen and artists of color and LGBTQ artists—just trying to bring voices and things that hadn’t been in the building before because no one had really thought of it.”

You also worked on the Obamas’ current home in Washington. How does it compare to the White House?

“Well, it’s not white on the outside. It’s a really lovely, fairly normal family house. I think that they are thrilled to be in a space that is just easier. There’s a difference between their public life and their private life. They get to have a home that is not ‘above the store,’ so to speak. They don’t have to live and work in the same space. I think, again, to not have such scrutiny and lack of privacy is probably a really wonderful thing for them to finally have.”

The Home Accessories Our Staffers Can’t Get Enough Of