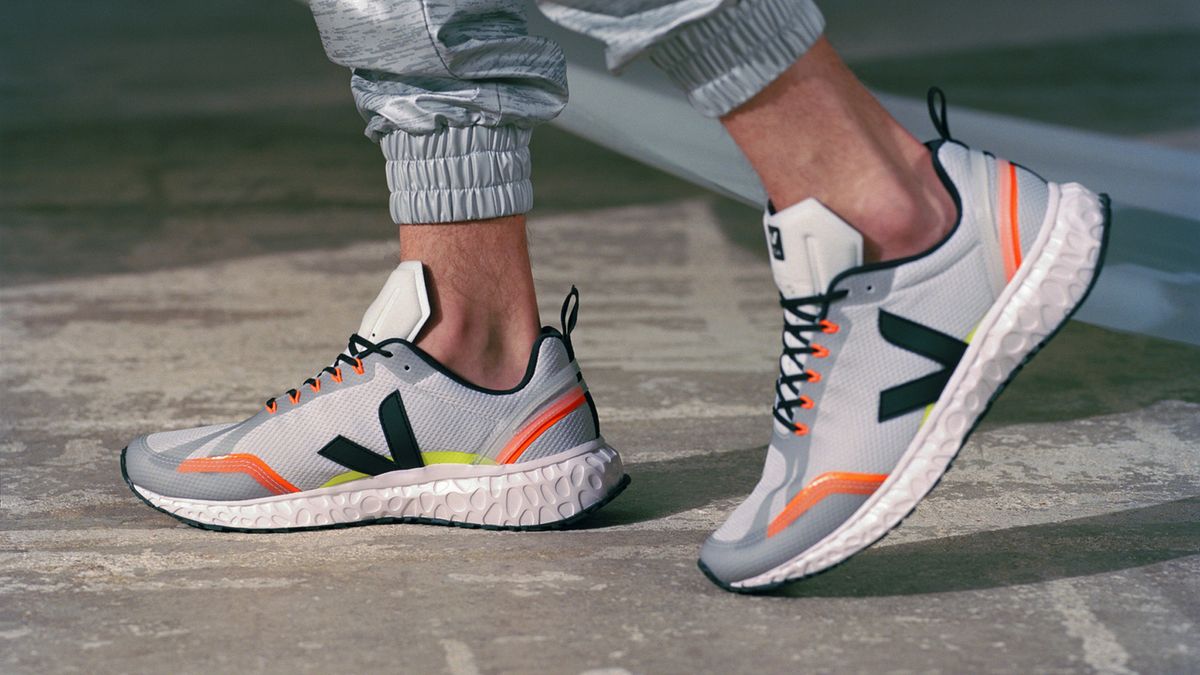 It uses less petroleum than any other sneaker on the market.

Jodi Taylor
We first fell in love with French sneaker brand Veja when they released their silk sneakers back in 2017. A few months later, we met the two founders, Sébastien Kopp and François-Ghislain Morillionn, while in Bordeaux to get to know their sustainable practices a little more personally. Sure, they create buttery-soft, sleek, and beautiful sneakers at an affordable price point, but it’s Veja’s goal to be as sustainable and transparent as possible that really does it for us. No detail is overlooked: They ethically source materials and packaging and clean up their production and distribution processes. They also work with local communities in the Amazon rain forest and always ensure that there are fair working conditions every step of the way. Now, after years of research and development, because Veja would rather get it right than get it fast, they launch the world’s first ecological running shoe, the Condor.

“It took four years of in-depth research and exploration to seek out the best factories and innovators in their own right. For a standard running shoe, many parts are made out of petroleum. To move completely away from petroleum while still achieving the same quality in the shoe was definitely a long road,” Kopp tells us. Yet they did it. Made in Brazil, the Condor is the first post-petroleum running shoe. “The Condor is made for the everyday runner and is recommended up to a half marathon,” Kopp tells us about the technology and functionality of the show. “The sole of the shoe itself is inspired by the bone structure of the condor, a bird native to South America, where Veja produces its sneakers. We feel they’re still really cool sneakers that you’ll want to wear all the time.”

Photo: Courtesy of Veja
Where did the idea for the Condor come from?

“We created Veja in 2004. Our goal is to create sneakers that respect the environment and are made with dignity. We grew step by step and developed several organic and innovative materials. On our journey, we realized that typical running shoes are fully made of plastic. And what is plastic? We discovered it was 99 percent petroleum. So the idea behind our running shoe was very simple: to create the first post-petroleum running shoe that would eradicate as much plastic as we could by mixing natural, bio-based, and recycled materials, and reducing the amount of plastic in it. We had succeeded in creating a 53 percent bio-based running shoe, which works for the first iteration.”

Other than sustainability, what else was your focus?

“During the four years of initial research and development, we were obsessed with two things: the ecological raw materials we could use and the technical performance. To combine both was the challenge. We hired a team with a strong background in the running world to be sure we would meet the runners’ expectations.”

What was the trickiest part of creating this sneaker?

“To make a more ecological running shoe, it’s like—other brands are driving on the highway, while you are driving on a muddy road into the Amazonian forest. All parts were tricky; the lightness, the flexibility, the sustainability of the shoes, the kind of runners who wear them. This special care greatly improved the skills of the team, to make better shoes across the board.”

Photo: Courtesy of Veja
How were the shoes tested?

“First, the Condor was tested in Brazil by the engineers in charge of the project working with independent laboratories. Then we gave pairs to a wide array of runners and some people from the running industry in different countries. In total, the Condor was tested on more than 10,000 km [5,400 miles] before being launched.”

With the devastation in the Amazon rain forest, how has that affected Veja’s production and the brand’s work with the communities there?

“Luckily, the seringueiros we are working with are not touched by the Amazonian fires. Their area is self-protected, as they prefer to harvest the latex of the rubber trees than to deforest to raise cattle.”

This French Sneaker Brand Will Make You Rethink the Fashion Industry
The Best Eco-Friendly Brands That Make Us Feel Both Chic & Smug
How Sustainable Are Your Sneakers?
More From the series Designers