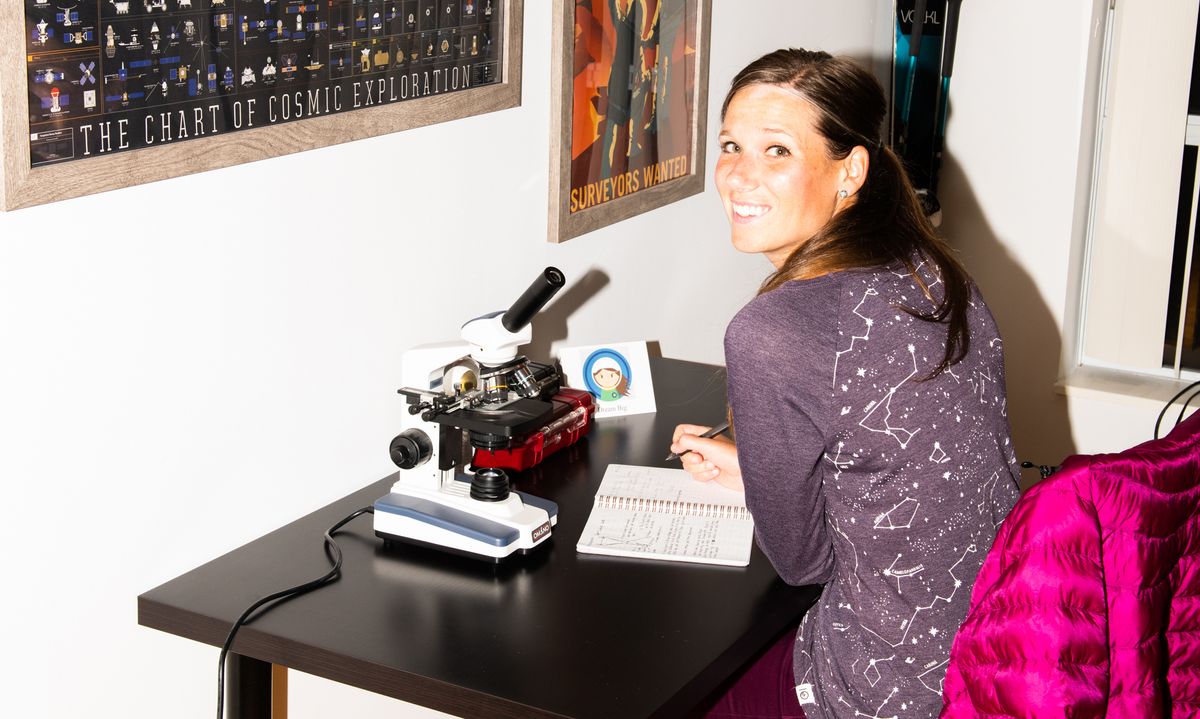 Noah Lehava
I want to be an astronaut when I grow up. Natalie Panek didn’t ~just~ say that to her parents when she was a young girl, she did it. “When I was a kid, I had this idea that I wanted to be an astronaut. I watched so much science fiction and thought, ‘Those people are so cool, I want to be on a crew, traveling to [a] far and remote place,’” the aerospace engineer reminisces. Panek excelled at International Space University at NASA Ames. She made the top 100 finalists for going into space, but unfortunately, a tiny white streak of hair—a sign of vitiligo—would, ultimately, knock her out of the running to venture outer space. But her work in space didn’t end there. Now her job at space technology company MDA is, quite literally, out of this world. And she’s working on solving one of Earth’s most underrated issues: space trash.

Panek creates robots that fix damaged or dead satellites in orbit in hopes of preventing perpetual collisions that could ultimately make space exploration increasingly difficult—and dangerous. It’s important work, and she’s partnered with Arc’teryx in their Problem Solvers campaign to shine a light on the issue. Here, we catch up to chat about what her day-to-day entails, the importance of diversity in STEM, combating pollution in outer space, and exploring on earth.

“My background is in aerospace engineering, but what I do day-to-day is build robotics that work in space. That could be anything from a robotic arm, like Canadarm or Canadarm 2 that’s on the International Space Station, to parts of the Mars Rover that’s exploring another planet.

“It depends what I’m working on, but it could be sitting at a desk doing documentation or working on 3-D models of robotics and spacecraft. It could be time in our clean room, which is our space where we’re building testing hardware. A lot of meetings and collaboration with other engineers—everything we do relies on a team of people working together and brainstorming and troubleshooting.”

How does testing work on Earth for something that is going into space?

“Testing is one of the [funnest] parts of our jobs, because you get to have the hardware physically built and you’re putting it through its stresses and trying to make it fail. Because we’re sending things into space that cost millions of dollars and potentially billions, we want to do as much testing as we can on Earth to give the team confidence that it will actually work when it gets there. We build lots of prototypes and different models to do the tests on, and usually we do testing that simulates every phase of the mission. So, for example, if you’re launching a rover to Mars, it first has to leave Earth in a rocket. So when it goes up on that rocket, it gets shaken really violently in all directions. So we’ll put the hardware on a shaker table that simulates those vibrations. And then when it’s transiting to Mars, it will see the vacuum of space, or radiation, so we might do radiation testing at a lab. And then if your rover is operating on Mars doing science, you want to make sure it works in the CO2 atmosphere and can withstand dust storms being blasted at it, as well as the extreme temperatures that they see—so you might put it in a thermal chamber that cycles between really cold temperatures at night and really hot temperatures when things are operating. Or you might put it in a chamber that blows simulated Martian dust at it and make sure that it’s not going to creep into all of the mechanisms.”

People hardly think of space trash. What are the risks of orbital debris?

“Almost everything in our daily lives is enabled, either directly or indirectly, by the satellites that are orbiting Earth—whether it’s Earth observation satellites in low Earth orbit, or using GPS, monitoring our weather or climate—it’s all possible because of these great little pieces of hardware orbiting our Earth. But that hardware has a finite life. It’s a lot like our appliances or our cars; they’re not built to last forever. So the more we put up there, the more likelihood there is of collision between those satellites. There’s already a ton of debris up there, and all of this debris is traveling at hypervelocity (really fast speeds) and all of that debris can collide with satellites, take down satellites, cause a lot of damage which would have a really big impact in our day-to-day lives. And we don’t really think about that, because the satellites are kind of sight-unseen.

“Even the astronauts on the International Space Station, the ISS, have altitude adjustments based on debris they’re tracking, making sure the debris is not going to hit the station. The more and more debris you put up there, you [can] get to a point where one collision triggers a never-ending cascade of future collisions. The more stuff that’s up there, the harder it’s going to be for us to get exploratory spacecraft like rovers or other deep-space satellites out of Earth’s orbit to go to places that we’re really curious about.”

Have you put any of your work up in space at this moment?

“Not for the satellite servicing initiative. We’ve done a lot of prototyping on the ground—a lot of testing it here, trying to build confidence. It’s a bit of a risky endeavor, and nobody’s ever done it yet. That infrastructure’s not there. It takes time, and hopefully it’s something that’s going to gain momentum and we’re going to start to see a lot of it in the coming years.

Did you have any hurdles early on in your career, especially in a male-dominated industry?

“I think I’ve been pretty lucky, honestly. For most of my education, and even the early parts of my career, I didn’t recognize that I was one of the few women in that environment. I just wanted to learn. I was very good at what I did, I was very studious in university and got good grades, so people tended to gravitate toward me to help get through. I think one of my biggest barriers has been my own self-confidence and doubting myself, or feeling like I didn’t belong in an environment. I just saw someone tweet the other day that whenever they ask a question, they preface it with, ‘This might be a dumb question, but…’ I relentlessly ask questions, unapologetically, but I always add those qualifiers before it. It’s those things like that where you’re second-guessing yourself or feeling like maybe you don’t belong in that environment. So I try really hard to get rid of that or make sure the other women that I have the opportunity to work with don’t feel that way, and that this is a safe space and they can speak their minds and bring their ideas forth.”

Why do you think it’s important to have diversity in STEM careers?

“In general, we have a lot of problems to solve, and the more brains and problem-solvers we have working on these problems from every background—gender, age, race—the more we’re going to start finding creative solutions and create positive change in our communities, and leave Earth in a better way than we’re treating it now.”

What advice would you give a young girl looking to get into STEM?

“I would say don’t be afraid to try something that maybe you wouldn’t, normally. Give it a shot, go in with an open mind, and be willing to learn something new. And if it’s not the right fit, there’s no shame in backing out or recognizing that it’s not working out.”

What is the most far-flung place you’ve been on Earth?

“The most remote place is probably Baffin Island in Nunavut. That’s an area I’d love to explore more, but it’s hard to get to, and it’s expensive. It’s really beautiful. There are mountains, glaciers, glacier-fed rivers, moraines—just gorgeous.”

“We did a trip to Greenland a couple years ago, also doing backpacking on the East Coast, and we had gotten into this town pretty late and had done some logistical coordination beforehand with an operator to try and get us some fuel and a gun in case we run into polar bears, but because we got into this town so late, we were like, ‘There’s no way we’re going to be able to arrange this to start the following morning.’ We went for a stroll in this town, and I saw this house out of the corner of my eye that had these posters posted on it, so I walked over to read what they were, and as I was getting up to them, this guy opened the door and was like, ‘Oh, are you guys Cam and Nat? I’ve been emailing you.’ So we totally coincidentally ran into the guy that we needed to find to get the gear to start our hike the next morning.”

Is there a place you’re dying to explore?

“Antarctica. Or the moon.”

There’s a Gender Gap in Science & These 2 Women Are Closing It
7 Secrets I Learned Making $11 Million for Charity
60 Delightful Minutes with Manolo Blahnik
Part of the series: