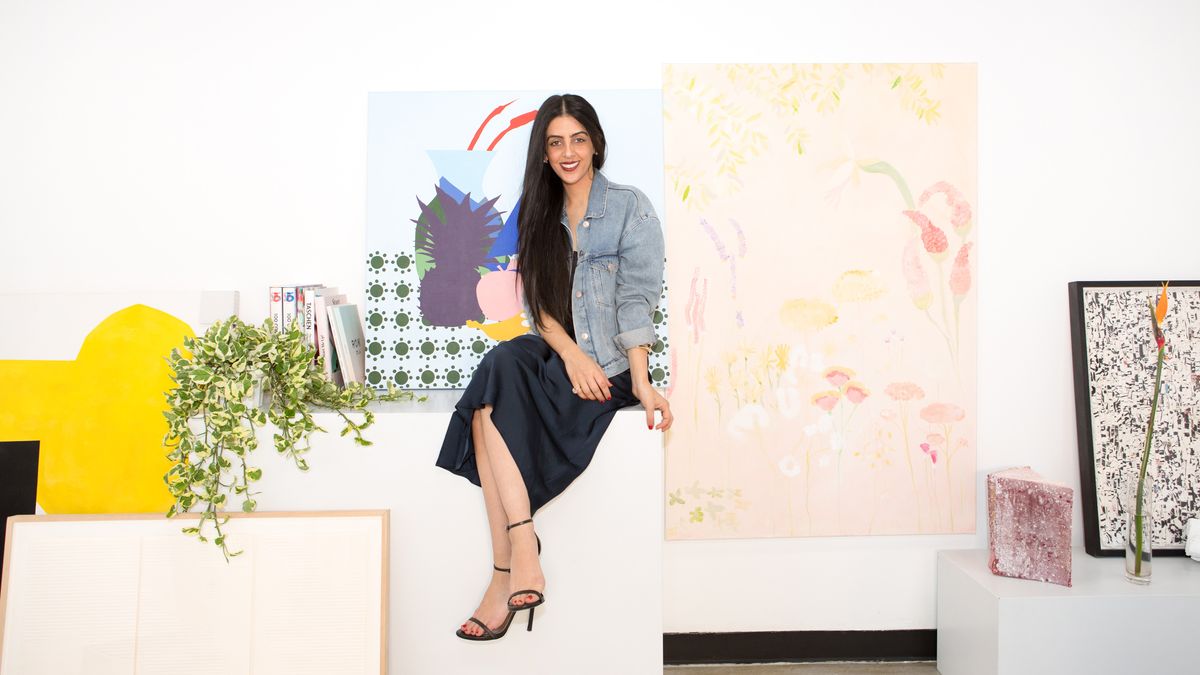 How to Invest In Upcoming Artists Before They Get Big

This just in! You can now afford adult art.

Emily Ramshaw
Emily Knecht
Chelsea Nassib’s genius idea for accessible art came when she was trying to establish herself as a painter after art school and quickly discovered that there was no straight path to follow to become a *career artist*. “As an artist you sit alone in your studio and produce work; there’s a networking element, but no career path.” Meanwhile, her friend—and now co-founder—was working at the Gagosian, selling to big-time collectors, while her peers would approach her to ask about buying art well under typical gallery prices. The natural concept for two millennials? To make art available online, of course. And Tappan was born. “We gathered a group of friends out of art school and got them to let us put their artwork online to see if it would sell,” Nassib says from Tappan’s Atelier space in Los Angeles. “Would people buy artwork online in the first place? That launched in 2012. And they did; and they do. So here we are five years later.”

Five years later Tappan is way more than an e-commerce destination to buy art. It’s a veritable network of emerging artists that Nassib and her team support with career development while providing them with a platform to share their work. The best part? A lot of what’s available to buy on the site costs less than a mid-range designer handbag. Even better, you can hang a piece on your wall that you love and know that it will only increase in value. Here’s how Tappan is shaking up the traditional art market—plus four emerging artists you should invest in now.

Why Tappan is investing in emerging artists (when traditional galleries can’t and won’t):

“We represent the artists, but we enter into more of a partnership with them. Traditionally, the brick-and-mortar galleries couldn’t afford to invest in emerging artists. Let’s say you’re selling works for $500, and you have 10 works in your show—you’re making $5,000 and the show is up for a month. There’s no way you can cover your overhead, your rent, the gallerists, etc. The emerging market was something where you had to know people and be involved in. There’s still that culture, which is lovely to be a part of, but because of the internet, we can invest in artists who are selling at a more reasonable price point and make their work acceptable to people who want amazing work by real artists.

“The partnership comes in because we invest in them as much as they have to have faith in us. These are people who we’re finding out of school who may or may not have had gallery shows before. We have to identify the talent, and then we also help groom them. We have artist managers who help with career development. We’re trying to help these artists learn the skills they need to continue on in the art world.”

Why you can trust Tappan to find emerging artists that are worth investing in:

“We do a lot of storytelling. We try to tell the artists’ stories on the platform. When you go on our site, there’s a lot of information about who the artist is, what they’re practicing—you can spend hours in the journal looking at who and how and why they do what they do. We believe that personal relationship and connection you develop with the work and the artist’s practice is something that’s important. On the other hand, we are very transparent about the works that are available and the pricing, so you know that you’re never being ripped off for what you’re buying.”

Why being an entrepreneur isn’t so different from being an artist (and the challenges that come with starting a business):

“The thing that artists have, which is something I think that all creatives have, is a vision, and you will work tirelessly to make that come to fruition. That was something that translated really well because it was creating something and building something that didn’t exist before, creating this market for collectors and emerging artists. We built what we set out to build in 2012 a long time ago, but what’s happened today, and what keeps me excited, is the continual innovation, the projects, the stuff that makes you feel like you’re still being creative, because the managing and the operating and the day-to-day is definitely not my forte. Entrepreneurs are ultimately doers—it’s just about doing, doing, doing—and once you build [a] team and you’re not doing as much and you’re managing more, that becomes very difficult.”

Why she decided to open an ~offline~ space:

“There were a lot of reasons to open a space. Collectors, as comfortable as they can be online, they like to have the possibility of seeing the work in person even if they don’t actually see it. Because we represent our artists, we wanted to give them the opportunity to show their work in real life. The space is part gallery, part artist-in-residency. The artist-in-residency part was important to us for two reasons. One, we’re always trying to un-define what a traditional gallery means. So, by allowing people to come into a space where they get to go into an artist’s studio, for us it’s very similar to what we get to do online in that you’re interacting with them in their creative space, talk to the artist as their producing, see the works and works in progress. It’s not this sterile piece on a wall; there’s lots of human interaction. And that is where we believe the connection is the strongest. For me, being in a studio is so much more magical than in a stark gallery space. The artist-in-residence program allows our artist managers to do some of this career development and spend one-on-one time with the artist and help them push along their careers and practice.”

How the internet will change the art world for good:

“The traditional as it exists today is very important and will continue to exist, but I think with the advent of the internet and social media, there is a wider funnel of people who will be able to experience art and start to be brought in. People who may not otherwise have felt comfortable going into a gallery can find artists that they like and niches that they like, similar to other industries, and have a sense of belonging. As a whole, the future is that, across the board, there will be more transparency in a traditionally opaque industry. Historically, sale prices weren’t shared, and a site like Tappan has always been about transparency and listing our prices. There was just an art market report, and they reported that our generation isn’t as interested in auctions as they are direct sales, and I think that part of that is linked to our need [for] transparency and understanding why they’re spending. It’s not as much of an ego game for future generations.”

4 Emerging Artists That Are Worth the Investment