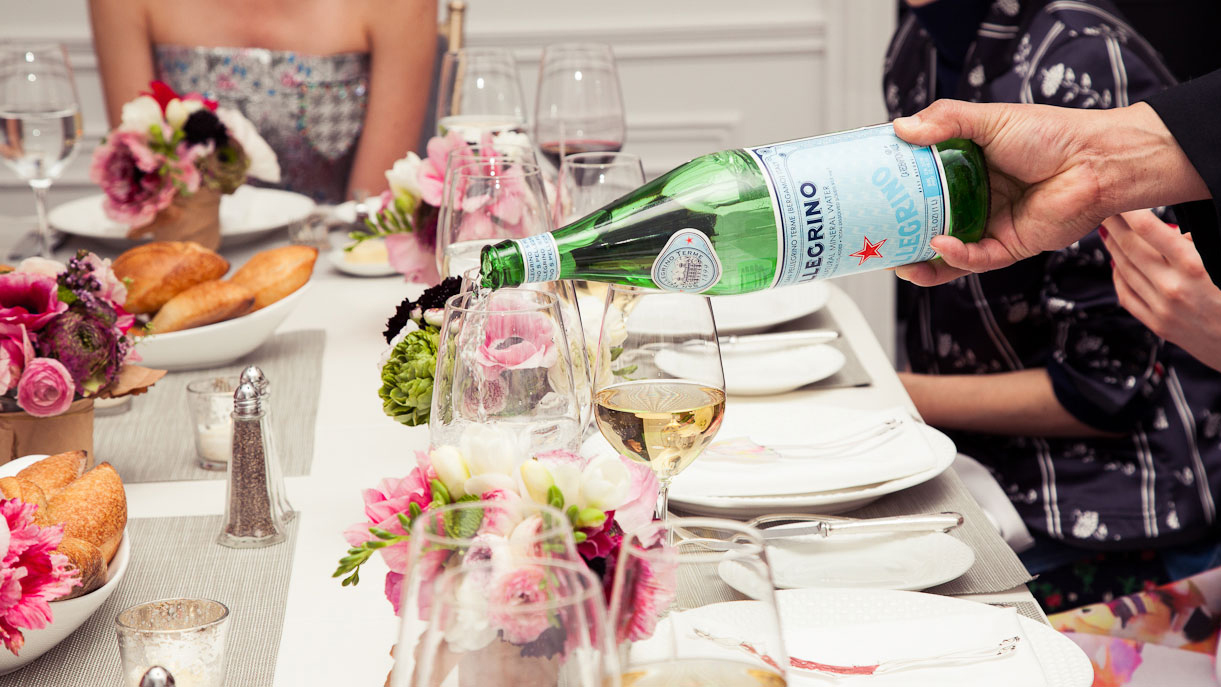 The Art of the Parisian Dinner Party

There are certain aspects of adulting that benefit from a bit of artistry. Take earlier this week, for example. I found myself in a frustratingly familiar situation. I was frantically replying to an email about a bumped-up deadline, while answering my boyfriend’s chipper “so, what do you want to do for dinner?” question, while on the phone trying to coerce Capital One into mailing a replacement card abroad.

Truth is, even though I know better than to saturate the schedule, it happens all. the. time. The more you hustle, the further you get, right? Well, combine that tendency with a “do it well or not at all” mentality and penchant for hosting, and even the simplest social gathering à la maison can morph into a full-fledged event.

Fortunately, there is respite from this relentless pursuit of perfection, a paragon of graceful IDGAF to emulate: the Frenchwoman. I know, I know. Buzzword fatigue. But despite the seemingly inflated allure of the French (spoiler: they’re not all stick-thin and disconnecting from email by 5:00 PM), they do know a thing or two about the art de vivre.

1. Eat the bread, but not the whole baguette

Isn’t the world supposed to end soon-ish anyway? JK. (Actually, only kind of). But in all seriousness, the French place a premium on pleasure and indulgence, just within reason. And the dinner party is a perfect illustration of this norm: Bread will almost always grace the table, and while dessert could feature an almond-and-apricot tart, it’s likely served alongside fresh fruit and yogurt. It’s all about striking a balance between what gratifies your body and mind, waistline, and palate.

We’ve all heard the “remove one item before walking out the door” styling tip. Well, this lesson in simplicity can apply to almost any facet of life. Saved ’grams of elaborate tablescapes can make it tough, but resist the urge to spend a fortune on one-time-use accessories. Buy fresh flowers and tea lights. Invest in solid tableware and silverware. And stop.

In France, a meal really begins at the market. Coming from the land of Fresh Direct and bodegas, the idea of buying from the producer at prices often lower than grocery stores was madness. But it’s real, and a practical, affordable, nice way to shop. It’s also an exercise in relinquishing control. Sure, you won’t be able to make your signature peach tart in December. But does it matter? (Hint: Nah—pear’s equally as tempting anyway).

Show up on time, but not early and never empty-handed. Don’t sit down to eat before the host. Offer to serve others before piling your plate. There are rules governing French dining etiquette, and while some can feel superfluous and painfully old-school, others serve the greater good and hold real meaning. Did you know there’s a correct way to cut every single cheese, and people kind of care? As someone who prefers the “challenging dumb rules” camp to the “fall in line” one, this elicited an eye roll of Liz Lemon proportions. Turns out cheese should be cut according to its shape so everyone at the table gets equal parts gooey gold and crust. Wait, so nice and thoughtful, right?

At the end of the day, those to-dos will pile up, and pressure to be the perfect host (and colleague, SO, friend, daughter, sister) won’t dissipate. The good news: We can be mindful of what we self-inflict and choose how we respond. There’s a certain symbiosis in caring for others and caring for one’s self. If “go above and beyond, and do it with a smile on your face” is the American mantra, then “live on your own terms and enjoy the ride” could be the French. After experiencing both, I can confidently say the sweet spot is a combination of the two.

Where to Eat in Paris
4 Ways to Nail French-Girl Cool for Your Wedding
7 Tricks That Make French Women Look So...French