Before I begin, I have to say that Julee Wilson is a good friend of mine. I love her. She’s funny and smart and is the kind of person who will always take the time to check in and make sure you’re feeling seen and heard. Her Instagram (which I highly suggest you follow) is a beacon of positivity—not to mention featuring lots of guest appearances from her insanely fabulous friends like Yvonne Orji and Misty Copeland—and her son, Orion, is #wombfire personified. He’ll make you want a baby even if you swore you’d never have one. I hardcore admire her. End gush.

Last fall, Marjon Carlos invited Julee, Solange Franklin, Paloma Elsesser, and me to be on a panel about diversity together at The Wing. It was an amazingly honest conversation about the realities of/barriers to true diversity in 2018. It’s a weird time to have that conversation—it seems everyone is hell-bent on being “inclusive,” but then expects a cookie for it. It’s treacherous territory, extremely complicated and fraught. 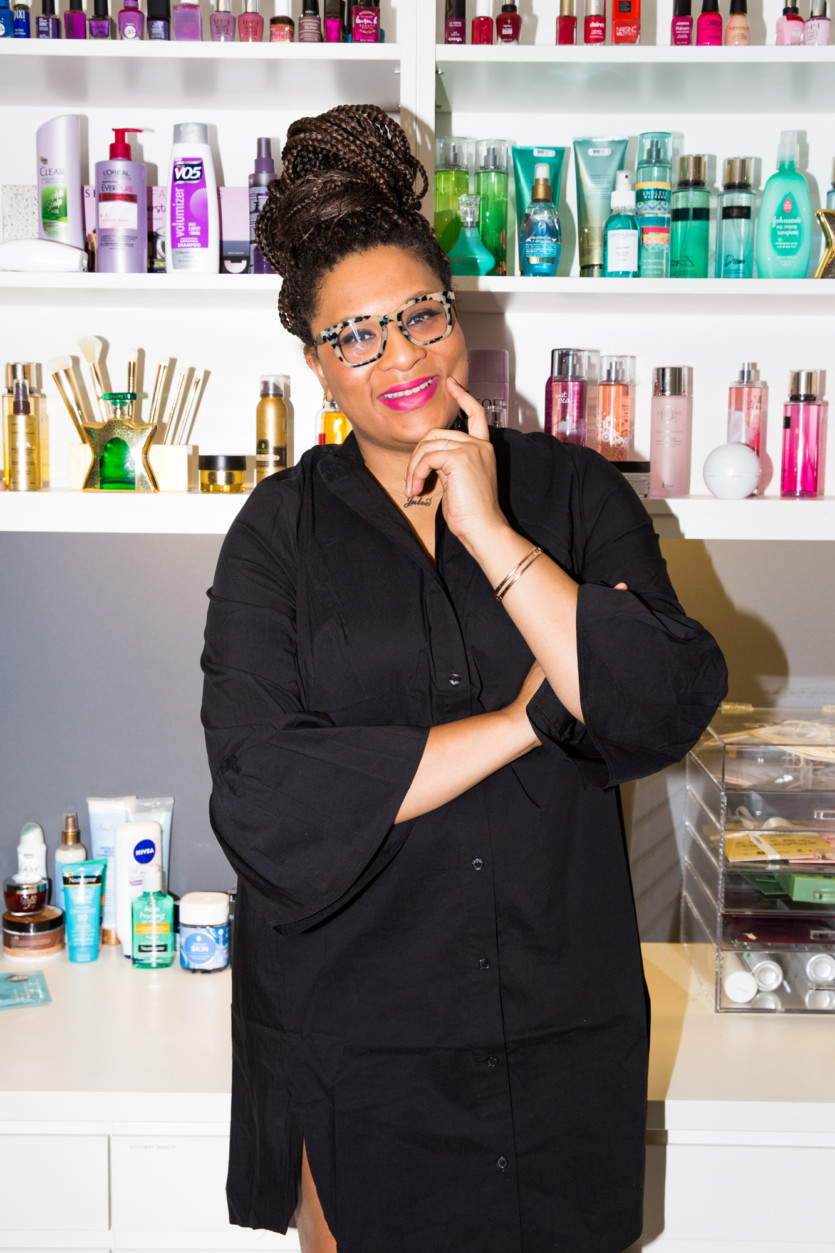 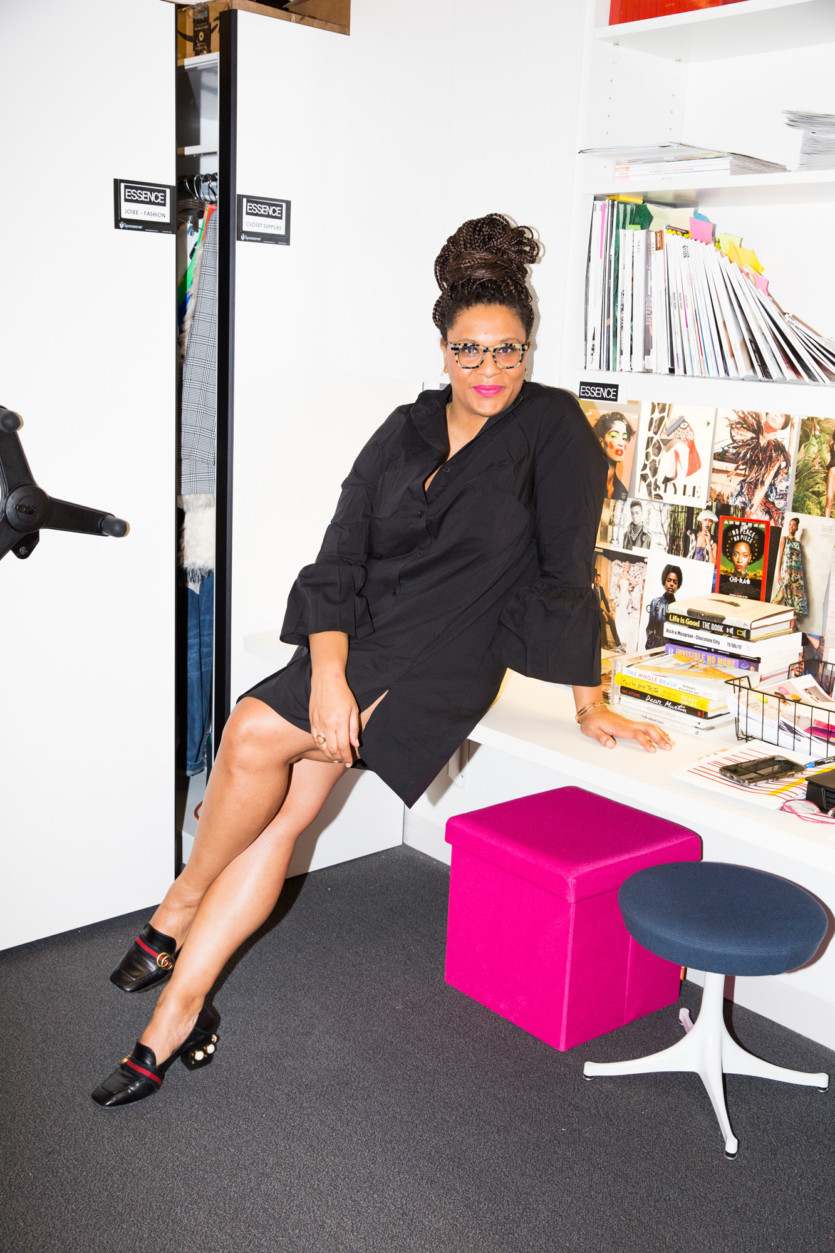 And Julee somehow managed to call out the entire library of old-school bullshit that comes along with beauty and fashion, without actually saying a mean word. Her voice is super powerful, but she’s bursting with love. To quote her directly, she’s a “glass-half-full kinda girl,” but she’s also “woke” personified.

Which makes sense, considering she’s the global beauty director at Essence and Essence.com. It’s a massive job, but I remember one morning at an event, asking if she’d be at another event that evening. She told me the brand in question didn’t work with Essence. I was shocked, but to her, it’s nothing new. In the era of the “grand awokening,” there’s so much going on that should in no way be tolerated in 2018. And unlike most fashion and beauty editors, Julee isn’t afraid to talk about it. 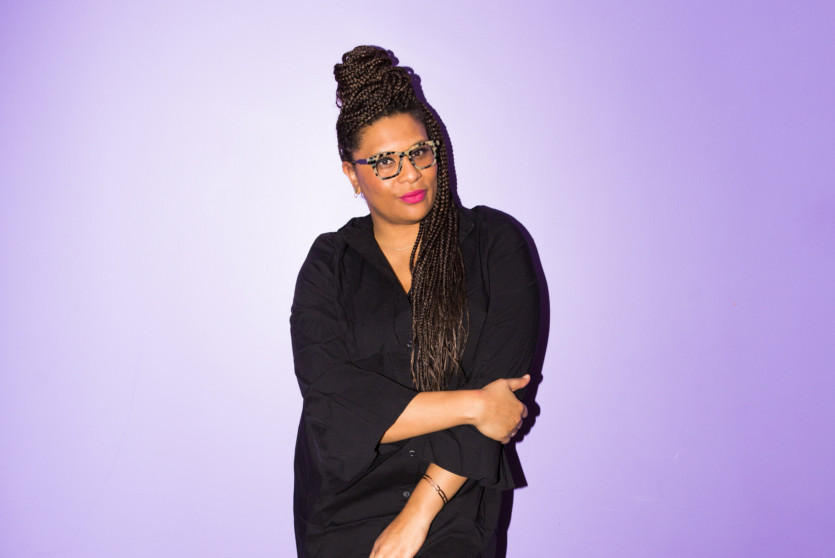 After summer internships at Bergdorf Goodman, Vibe, Condé Nast Traveler, and later at Parenting, she landed in the fashion department at Real Simple for over six years. Then she joined BlackVoices at Huffington Post before joining their larger style team. Then her good pal Misty Copeland (NBD!) had a hand in bringing her over to Essence.

Here’s how it all happened, and the things she’d most like to see change in fashion, beauty, and publishing. 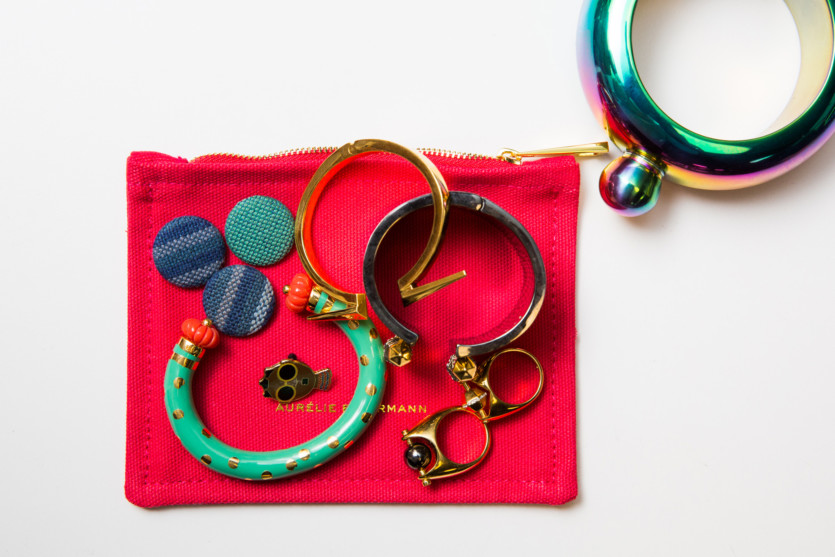 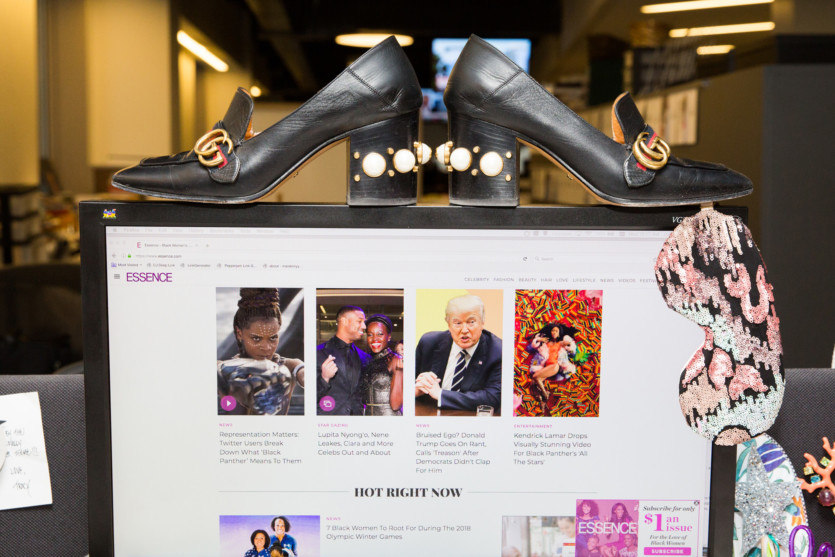 How Misty Copeland brought her to Essence:

“After four and a half years at HuffPost, I got an opportunity to come to Essence. Essence reached out to me to write the cover story for their September 2015 cover with Misty Copeland on it.

“Misty’s a good friend of mine, and I think they knew that and knew my voice and thought it might be nice for me to write it. I really wanted to, and people at HuffPost had written freelance here and there for things. I went to the powers that be, and they were like, ‘Nah. That’s an opportunity we’re gonna not have you do. That’s not our policy.’ And I’m like, ‘But it’s been done before,’ and they were like, ‘Yeah, on a case-to-case basis. This just doesn’t seem like something [we’ll allow].’

“It was an opportunity I felt like I couldn’t pass up. So I dug my heels in, and I was like, ‘Look, I’m gonna write this. I will deal with the consequences.’ I held my breath and closed my eyes. When I stood up for myself, they eventually said, ‘OK, fine, we’re OK with this.’

“Standing up for that opportunity was really a turning point. It showed me my power and my worth. So anyway, I wrote the cover story. And six months later, I get a call from Essence saying, ‘We’re looking for a digital fashion and beauty director, and we think you’re the person.’

“Being at Essence is a prize. Knowing the footsteps I followed in...like Susan L. Taylor before she became the editor-in-chief for 19, 20 years of Essence, she was the fashion and beauty editor. Michaela Angela Davis has had this job, Mikki Taylor... All of these amazing queens in the black community have literally had the same title as me. So I don’t know, it freaks me out a little bit. Because I’m hoping one day someone will be like, ‘Julee Wilson had this job, and now I have it.’” 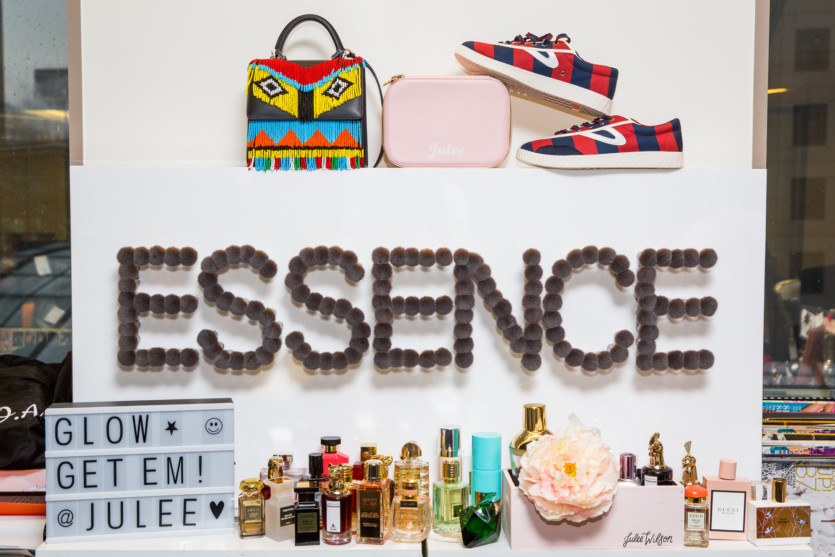 “I talk about that all the time. We applaud it because it needs to happen. But at the same time, they get all the praise. Like, ‘Oh, look how woke they are! Look, they put a black girl on the cover with her natural hair,’ whatever. We do that all the time.

“But the fact that we’re not looked to, or referenced, that’s when that whole cultural-appropriation thing gets us so fired up. I feel like it’s ‘flash in the pan’ wokeness. It’s like, ‘Let’s check off our extra woke box for the next six months.’ 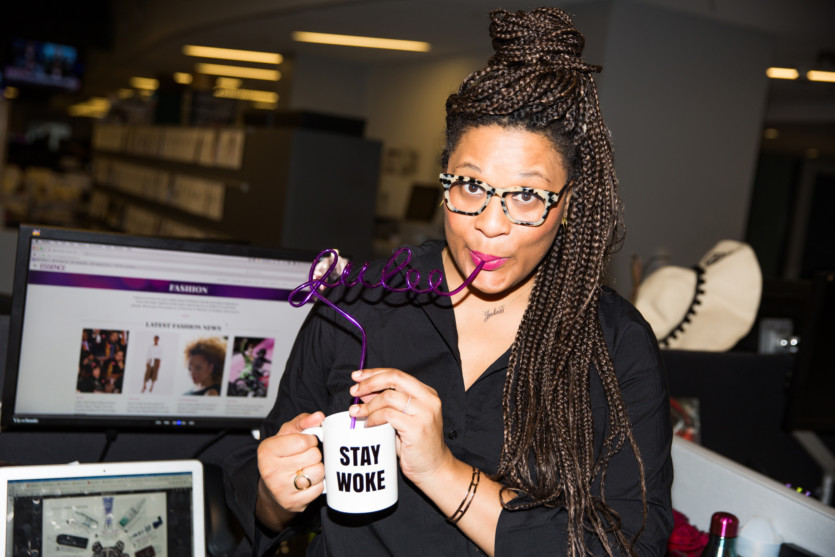 “I was talking to Jackie Fields—she’s an amazing black beauty editor at People magazine—last night, and it was so funny. I feel like I’m the ‘woke police’ at all times at these events and stuff. Because I’m like, I’m at this event about hair color, and all the boxes have white girls on it. I raise my hand and I say, ‘Does this work for black women, or textured hair, natural hair?’ and they’re like, ‘Oh yeah, totally!’ I’m like, ‘Well, I would never go in the store and buy it because I don’t see myself on the box, and the way you’re speaking to the product in the presentation doesn’t make me think that this would work for my hair.’

“I really try to come from a place of compassion. Because sometimes people just don’t know. I’m really about educating. I think that that’s one of my purposes of being in this position. I’m not just gonna sit back and be like, ‘I’m fancy. I’m a fashion and beauty director. I’m just gonna go to the lunch.’ I’m gonna go to the lunch, I’m gonna listen, I’m going to be a student and hear what you have to say. 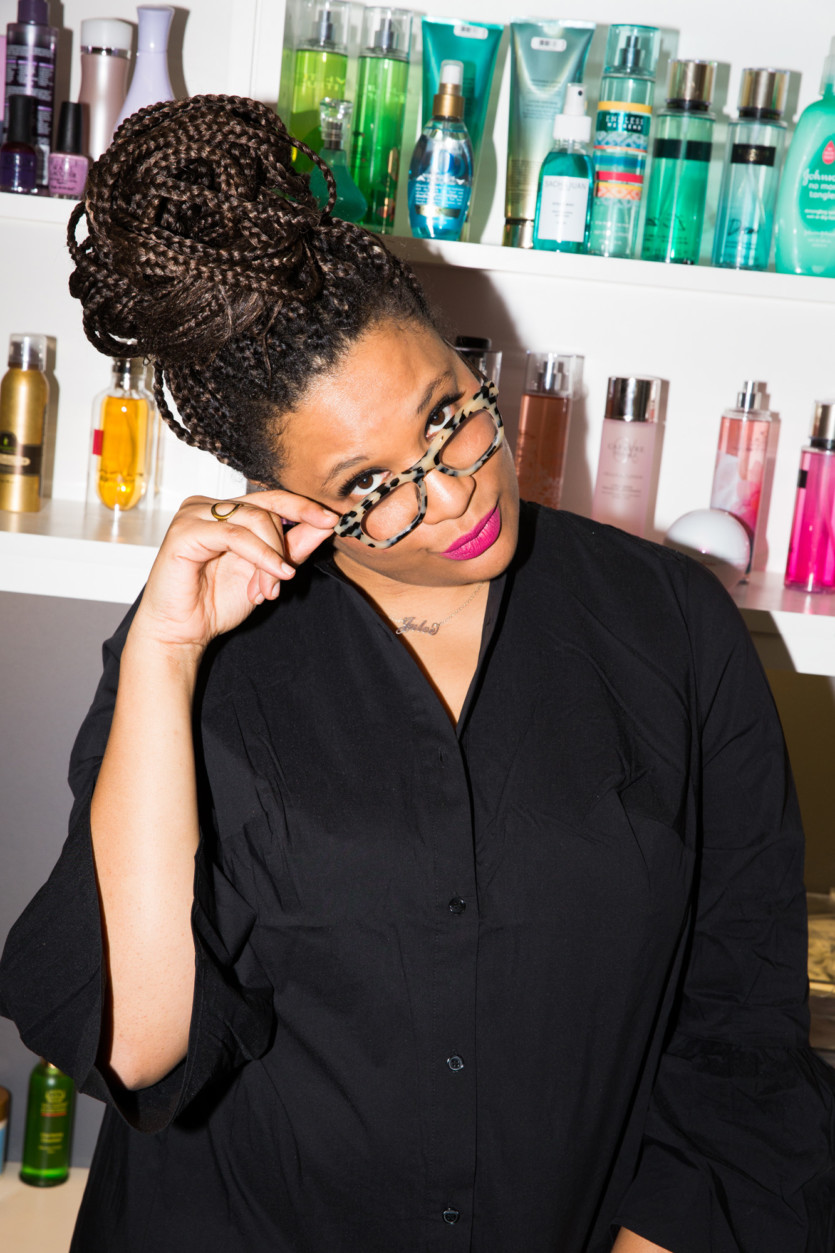 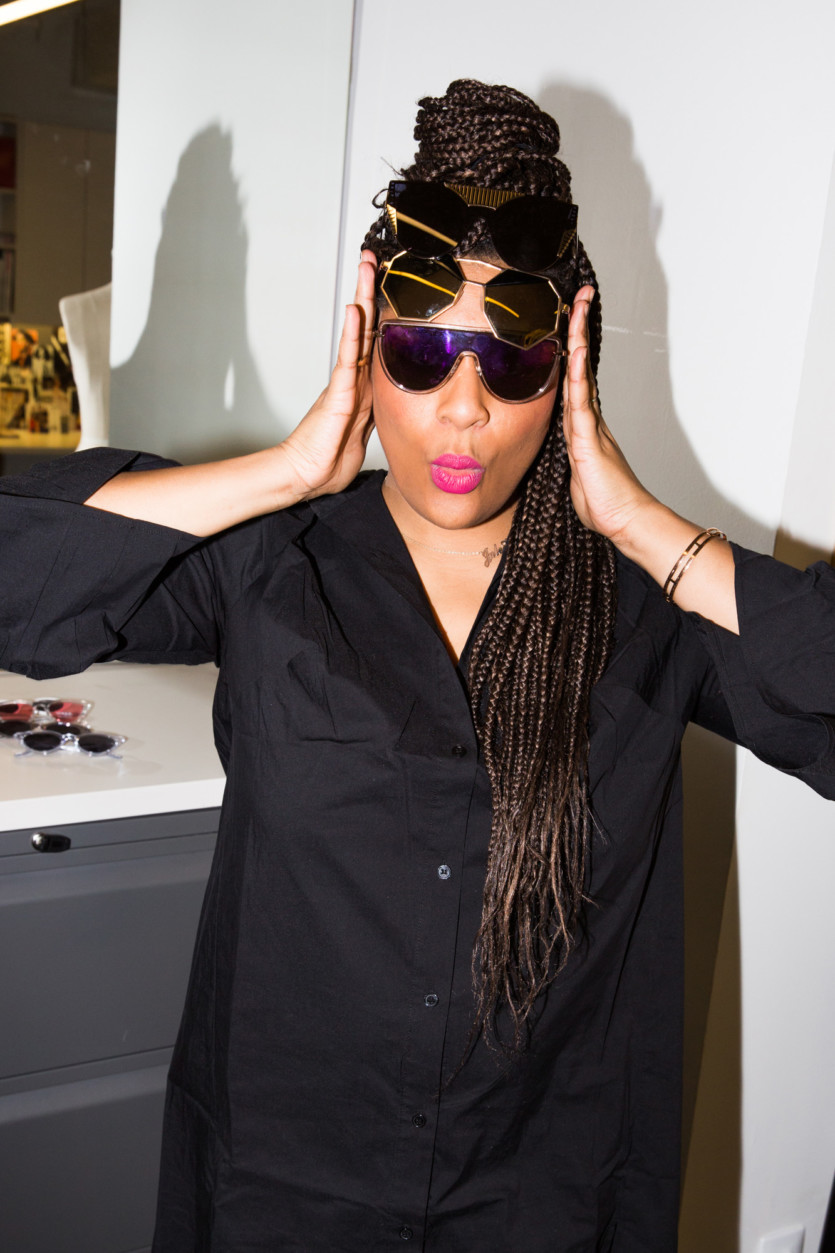 “But if you’re also saying it’s something for my community, and I’m not hearing that come across, I’m gonna tell you. I was saying to Jackie, ‘It’s crazy that I’m an expert not only on black women’s beauty, but white women’s beauty as well.’ As a beauty editor, I take pride in knowing everything. But when I go to these like, ‘black beauty’ events, there’s no white editors there.

“Like, you’re telling me that Allure, Vogue, all these people have the most badass beauty editors because they’re at these amazing publications? But if I ask them about transitioning of black women’s hair— transitioning from permed hair to natural hair—if I asked you about our edges, and what our edges are or what they need, and you’re looking at me like I’m crazy... Black people read your magazine, why would you not know about a whole sector of people? But I could tell you about everything that you put on your skin, I put on my skin, I use on my hair, you use on your hair. I go to every event there is, whether it’s for my community or not. Doesn’t that make me a more badass beauty director than you? It’s not a competition, but it just makes you think.” 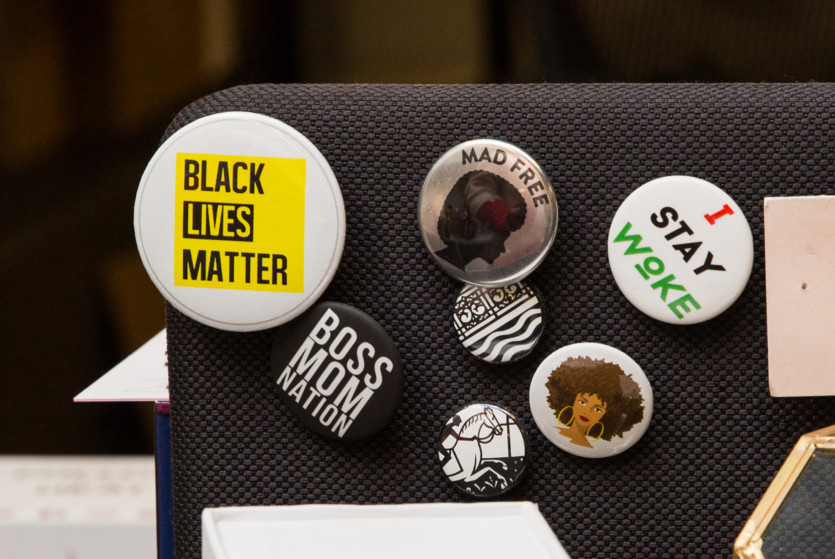 “As a beauty editor, I take pride in knowing everything. But when I go to these like, ‘black beauty’ events, there’s no white editors there.”

The big problem with beauty:

“If you’re the authority, I would think that you would want to know about everyone. Even hairdressers and the makeup artists have been getting all this heat that [they] don’t know how to do different hair. If you’re gonna be the most badass hairstylist, shouldn’t you be able to do all types of hair? That’s like me being like, ‘Well, I’m a really amazing fashion journalist, but I only write about dresses. Don’t ask me to write about anything other than dresses. I’m just gonna write about dresses.’ It doesn’t make any sense to me. Especially when America’s browning. The most badass, famous people in the world are black. Oprah, Michelle Obama, Rihanna, Beyoncé. You’re telling me you worship these people, and you can’t tell me about their beauty? Or like, the fact that if I said ‘Jane Carter’ to someone, probably the beauty director at one of these publications, they’d be like, ‘Who?’ It’s a line of black hair care that Beyoncé really likes using. But you wouldn’t know because I don’t see you at the Jane Carter event; I don’t see you at the Creme of Nature event; I don’t see you at Dark and Lovely. It’s so mind-boggling to me. 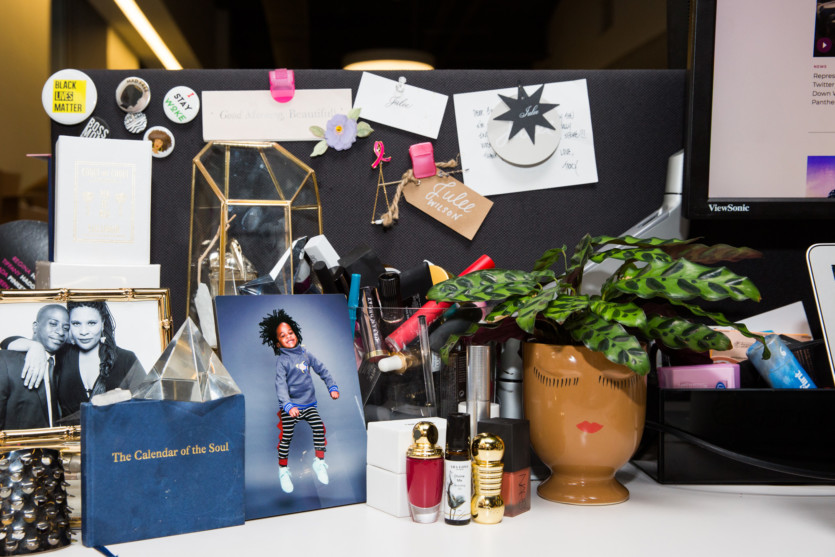 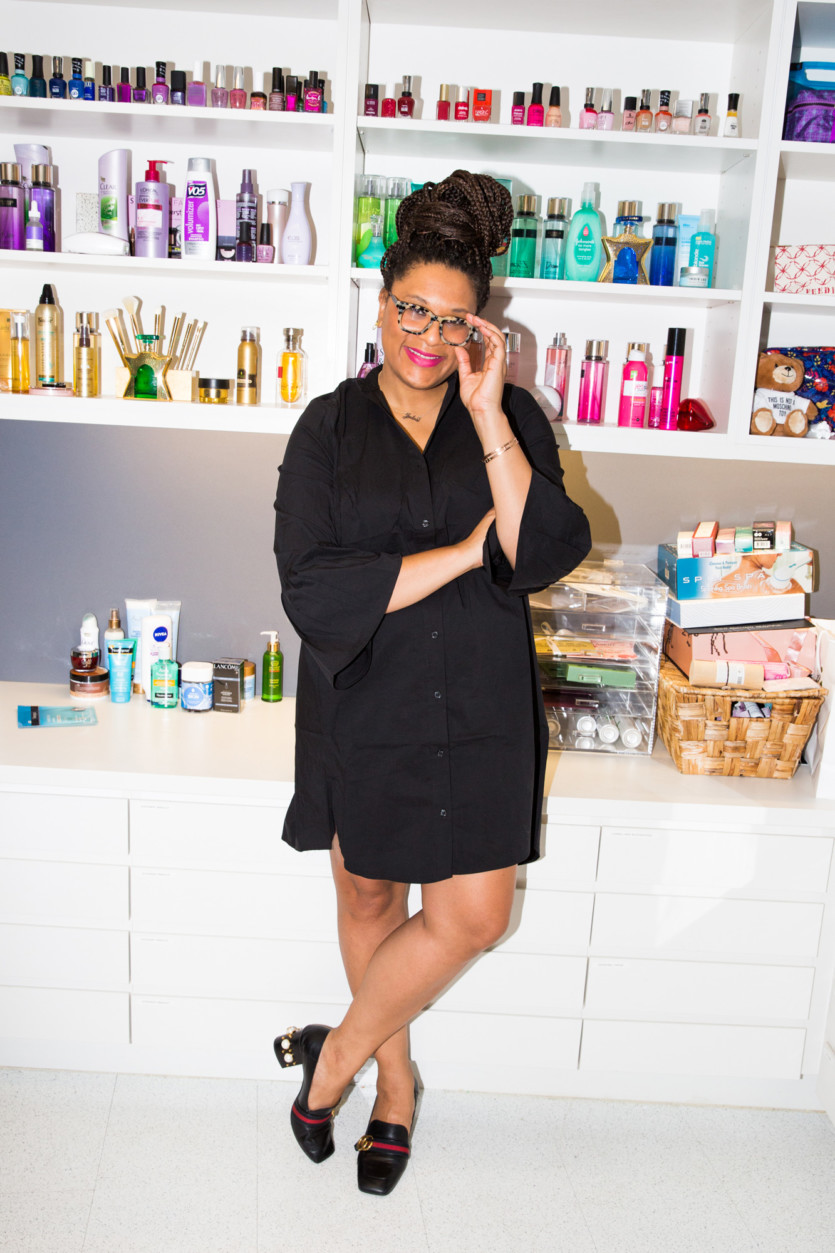 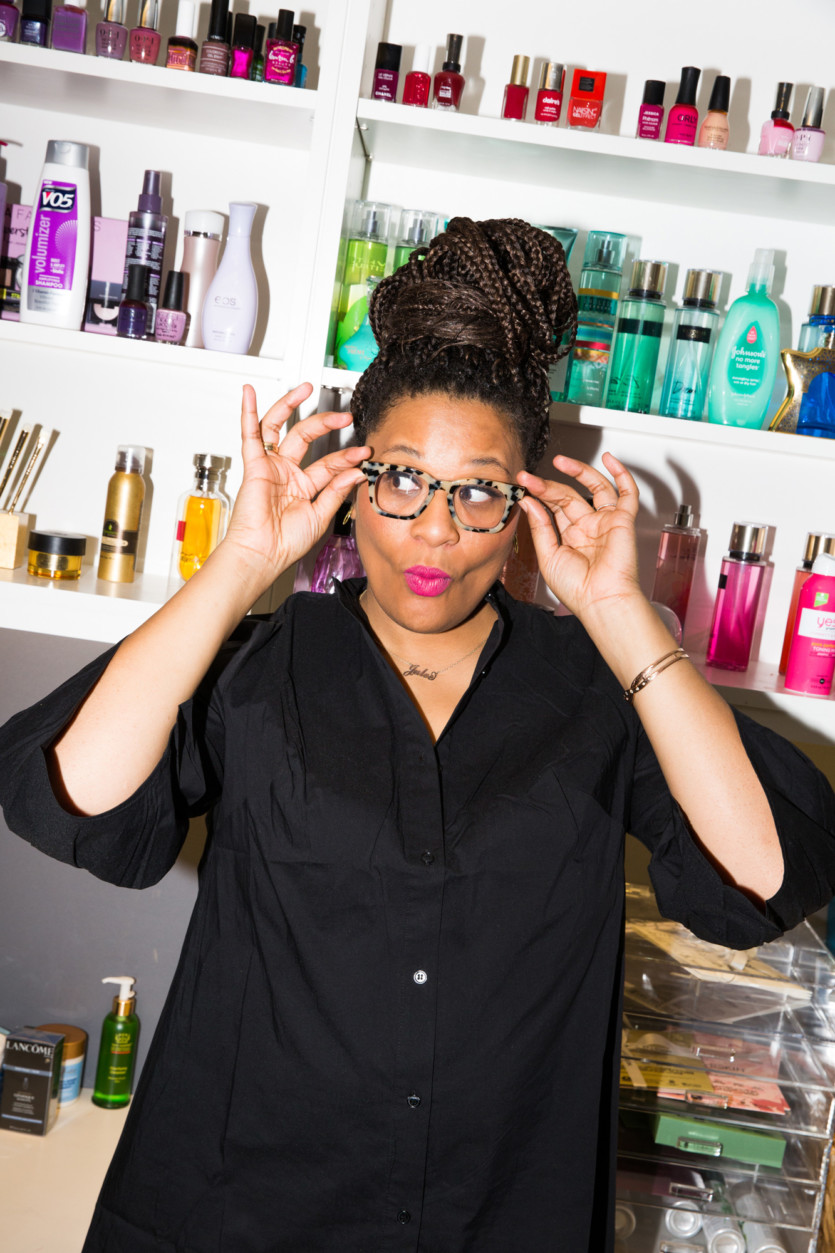 “I think it’s that part of white privilege that is so interesting, and [most people] don’t even think about it. It doesn’t even cross their mind that perhaps they should go to this event for a product that they would never be able to put in their hair or on their face. Because it doesn’t relate to them personally, they decide not to go. They don’t see the fact that whether it relates to you personally or not, you also represent that demographic of people at your magazine, and you should be speaking to them. But ‘I can’t use relaxer on my hair, so I’m not going to go to a relaxer event’ doesn’t work.

“The black women that read your magazine? Some of them get relaxers. So perhaps you write a story, and I’m just using relaxers as an example, but perhaps you should write a story about this new, super-safe relaxer. Companies are developing products that are a little safer than the chemicals we were putting in our hair years ago. That’s a story. That could be in [any of those titles]. But those editors aren’t going to the event to even know about it. Because it’s not for them, they don’t see how that could be information for their readership. Food for thought.” 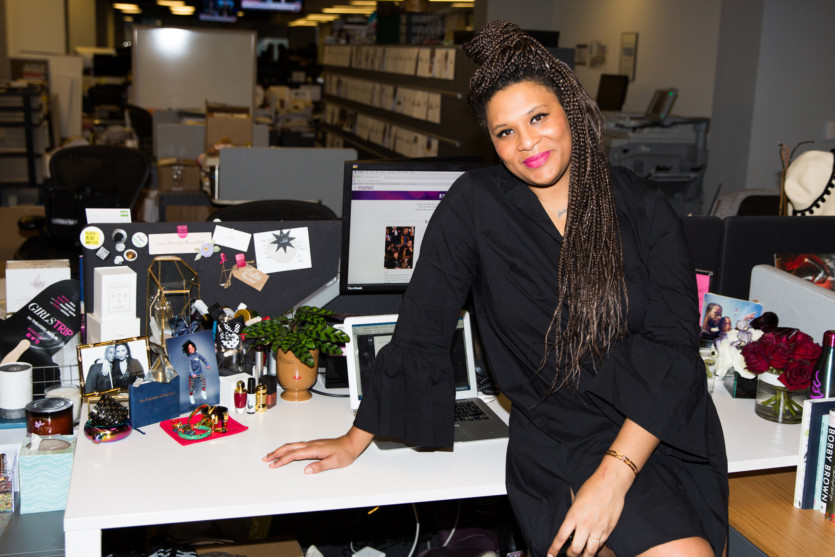 “[To some extent, this happens in fashion too.] When you’re at publications which [major European brands] feel like they would like some representation in, or they would like some conversation, then those brands will reach out. I had relationships with major brands when I was at the Huffington Post. But here, not so much. Our requests fall on deaf ears, and so part of me feels like, ‘Well, damn.’ Also, you don’t want to work with the biggest, most influential black magazine in the world? But you’ll gather inspiration from the black community and the culture, but you don’t want to align yourself with the publication in a way that I think would be really beautiful and beneficial?

“I’m a ‘glass half-full’ type of gal, so I’m always gonna say, ‘Yes, we’re moving in the right direction,’ and I’m hoping that people are sitting up and paying attention. But the proof is in the pudding.”

Qimmah Saafir Was Tired of Black Women Being Overlooked by Magazines, so She Launched Her Own
A Nasty Gal Alum Just Launched Her Own Magazine—and You’ll Want it on Your Coffee Table
Meet the Venture Capitalist Backing Your Favorite Brands