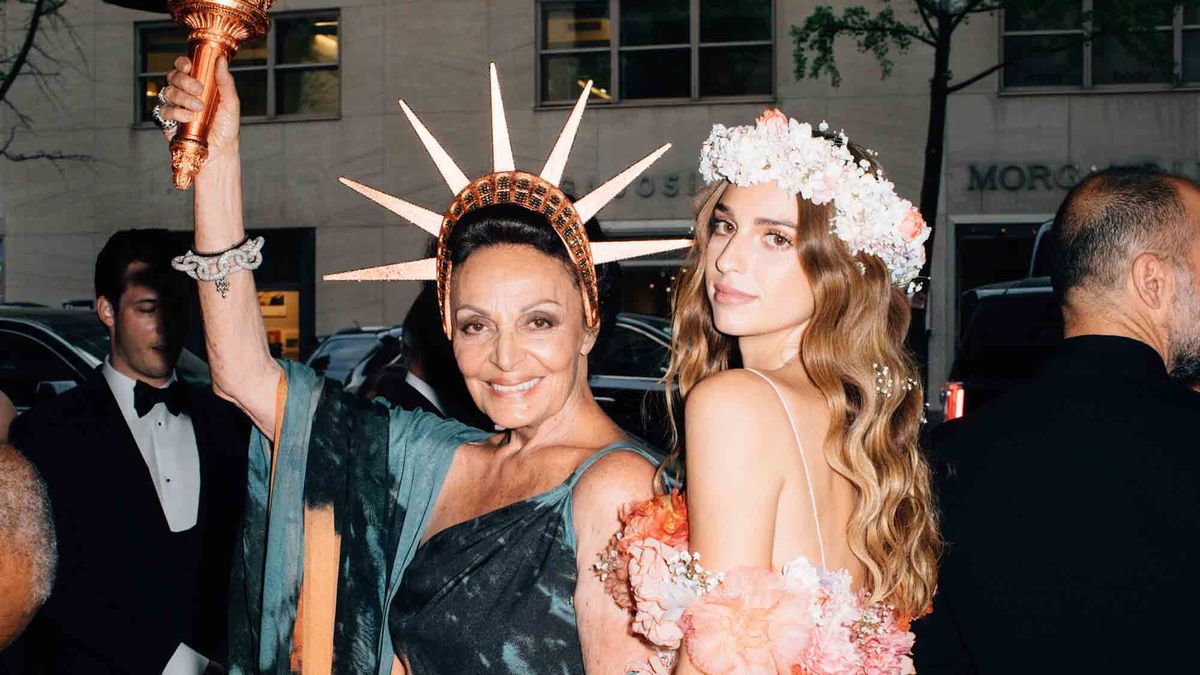 This is how fashion royalty does it.

Leah Faye Cooper
Ben Ritter
While Anna Wintour was festooning herself with feathers and Lady Gaga was layering on *four* different looks, Diane von Furstenberg and her granddaughter, Talita, were prepping for the Met Gala as only they could—in Diane’s massive flagship-slash-office, sipping water from DVF-emblazoned bottles while a dedicated glam team tended to every strand of hair and whisp of eyeshadow.

“I was so nervous,” Talita says of her first Met Gala in 2017. “I was only 17, which is illegal by Met Gala standards [laughs]. You’re supposed to be 18, but it was two days before my eighteenth birthday, so they let it slide.” The Georgetown University sophomore just launched her first collection, aptly coined TVF, and turns 20 tomorrow. Suffice it to say, it’ll be a birthday to remember, celebrated tonight alongside her grandmother, who dressed Camila Coelho and Adwoa Aboah for the occasion.

“[Talita] is young and fun and reminds me how much fun these events can be,” Diane told us. “She’s like a breath of fresh air, and especially as she comes off of designing her first collection, I think nights like this are really meaningful to her.”

Attending, Talita says, is indeed very meaningful, but not without its stressful moments. “I’m not nervous about going this year, but I am nervous that my dress is still being made as I’m getting my hair and makeup done [laughs]. So I’m nervous that I won’t even have a dress to go in!”

It happened at the eleventh hour, but every floral embellishment made it onto Talita’s dress, and she made it to Met Gala. Click through for more on her and Diane’s looks and what they love most about the biggest night in fashion.
1 / 16
“The camp theme is a true clin d’oeil or ‘wink.’ It’s fun, doesn’t take itself too seriously, and creates an environment where fantasy becomes reality. I wanted to bring everyone’s fantasy to life through their looks.” —Diane von Furstenberg
Talita von Furstenberg’s hair: Brian Buenaventure; makeup: Tobi Henney

How Yalitza Aparicio Got Ready for the Oscars
Getting ready with Alex Morgan for the Time 100 Gala
Getting Ready with Kristen Bell for the Golden Globes Is a Lot of Fun
MET Gala Red Carpet
Part of the series: