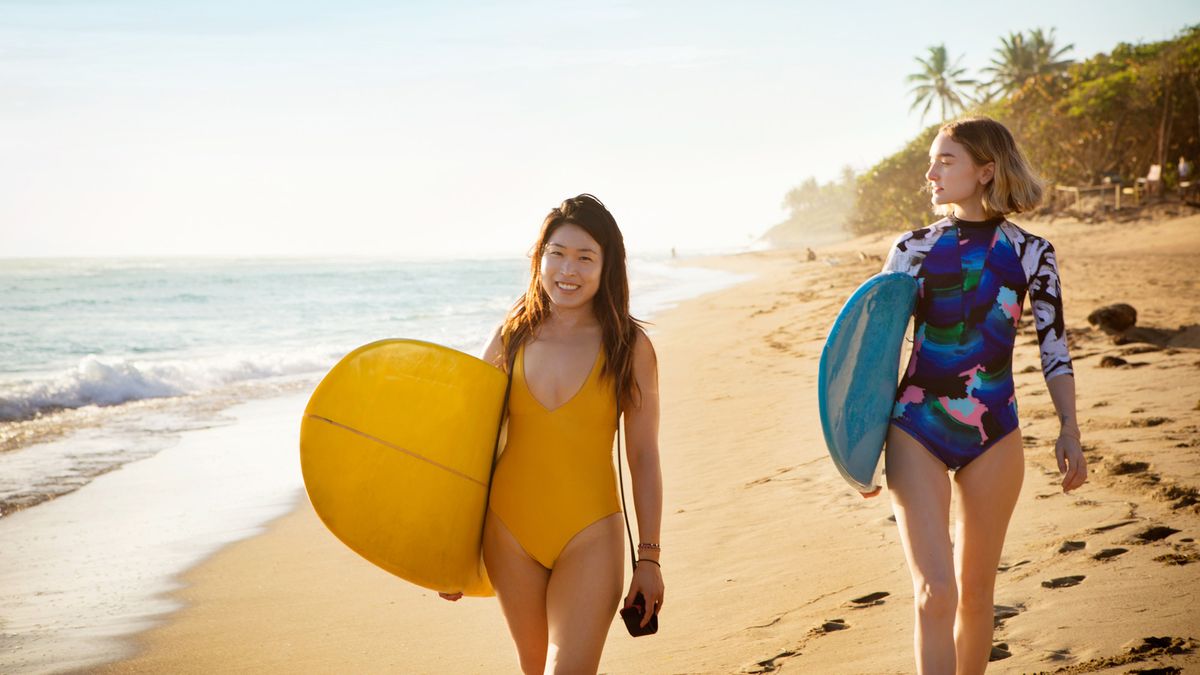 I Learned How to Surf, and I’ve Never Felt Better

In which I have my very own Blue Crush moment in the Dominican Republic.

Hannah Baxter
Nina Choi
Sixteen years ago, when I was but a gawky preteen in landlocked Missouri, my mom took me to see Blue Crush at our local theater. I and every girl around me watched starry-eyed as Kate Bosworth and crew tore up Hawaii’s North Shore in preparation for the annual Pipeline competition, all in sporty bikinis with perfect tans. They looked strong and badass, and that’s how I wanted to feel, especially at 12 years old. The film, in all its cheesy Hollywood glory, sparked my unrelenting dream to become a surfer. Even when I decided to move to New York instead of running away to Hawaii, that desire to learn how to ride never faded. Which is why, when I had the good fortune of meeting Jun Lee, the founder of cult-favorite skin-care line EiR, and she mentioned an upcoming surf trip to the Dominican Republic, I immediately asked if I could tag along.

Six weeks later, we were landing in Puerto Plata, where palm trees and sunshine replaced the dingy Brooklyn skyline. As we settled into the gorgeous Sea Horse Ranch in Cabarete, my nerves began to get the better of me. Jun and our photographer, Nina—both seasoned surfers—warned me of the dangers of being out in the water: the board could bounce back on the tether and give me a black eye; I could hit the reef and break my nose; sea urchins were everywhere, waiting to sting my feet. Also, you know, I could drown. These worries kept me up most of the night, but regardless, 5:30 AM rolled around and we set out to hit the waves at Playa el Encuentro a few miles away. And I do mean “hit” quite literally, because as anyone who has ever learned to surf will tell you, the first day involves falling. A lot. Luckily, I had three of the most essential things you need for your first day as a surfer—an amazing (and patient) teacher from Chino Surf School, a killer wet suit from Tuulikki NYC to protect my arms and back from the sun, and a crew of friends cheering me on from the shore. An hour’s worth of on-land instruction later, and I dropped the board into the water for the first time, my fears slowly melting away as I paddled out to the lineup.

Luckily, I’ve been a snowboarder since high school, so the orientation of being on a board was familiar to me, and I absolutely love to swim (essential for paddling out 40 yards from the shore). Of course, snow doesn’t have a mind of its own like the ocean does, so dealing with all the other factors around me—currents, the reef, missing contact lenses—was challenging, to say the least. I also don’t possess exceptional upper body strength (I prefer sports that involve my legs, like soccer and horseback riding), so paddling through white water for upwards of an hour became a rude awakening. To say I pulled every muscle in the top half of my body feels like an understatement. I recommend stretching beforehand and doing push-ups in the weeks leading up to your first session, since you’re essentially popping your body from a horizontal position into a low squat, and then a bent-knee stance, all while balancing on a nine-foot slab on top of a rollicking wave. It’s a workout!

Throughout the morning and afternoon, I tried my hardest to keep my frustration at bay, even as I failed to stand on my soft-top board (a style that is larger and easier to use for first-time riders than the typical fiberglass or epoxy boards) over and over again. But as I watched more seasoned surfers from the beach, I realized that no one rides a perfect wave every single time. Paddling out and giving it everything you’ve got is more than half the battle. So is the zen-like skill of learning how to read the waves themselves; when to go for it; when to hold back; respecting the space of your fellow riders, but also fighting for your spot in the lineup. It’s all about watching how and when wave sets break, both from the beach and on your board, so you don’t paddle too early (and the wave doesn’t carry you) or too late (the wave breaks over your head), both of which will result in a wipeout.

The first day, my teacher was with me and helped push me into the path of a good wave, but from there on out, it was up to me. Luckily, the community of surfers that showed up for dawn patrol—aka to surf as early as possible—was more than willing to help guide me as I struggled to catch a ride.

Eventually, after much trial and error, I grabbed the rails, the stars aligned, and I was vertical, gliding through the water and heading towards the shore. The reality may not have looked anything like Kate Bosworth, but there I was: out of breath, covered in seaweed, arms burning, salt water in my eyes and nose. It was a gorgeous day in paradise, and I was surfing. Strangers cheered me on as I cruised by on my perfect baby wave, and I finally took a second to appreciate the experience. I had spent so much time focusing on the steps (paddle! pop up! crouch! stand! arms out!) that I had forgotten that surfing was supposed to be fun.

Gleeful, I paddled back out to Jun and Nina, ready to catch my next ride. As I glanced around at the other surfers sitting on the back of their boards, eyeing the horizon, I realized how quickly this sport can become an obsession. It’s punishing for your body, the ocean doesn’t cooperate, and you can get seriously hurt—but despite all that, there were dozens of people in the water each day, ready and willing to endure it in exchange for those moments when it’s just you and the wave. It’s a kind of freedom, if an ephemeral, punishing one, and you’ll never master it. It’s like when your crush is playing hard-to-get—it just makes you want them more. In that moment, it all clicked, and I knew I would be back in the water soon.

That feeling has followed me all the way back to New York, where, unbeknownst to most people, there is actually a thriving surf culture. So if you find yourself out in Montauk this summer and feel like paddling out, maybe you’ll spot me in the lineup, patiently waiting to catch my next wave. Consider me a bonafide surfer girl.

Why a Beauty Brand for Surfers Is About to Be Your Newest Skin-Care Obsession
Everything a Genuine Surfer Girl Has in Her New Brooklyn Closet
Inside a Pro Surfer’s Idyllic Life in Under-the-Radar Hana, Hawaii
Part of the series: