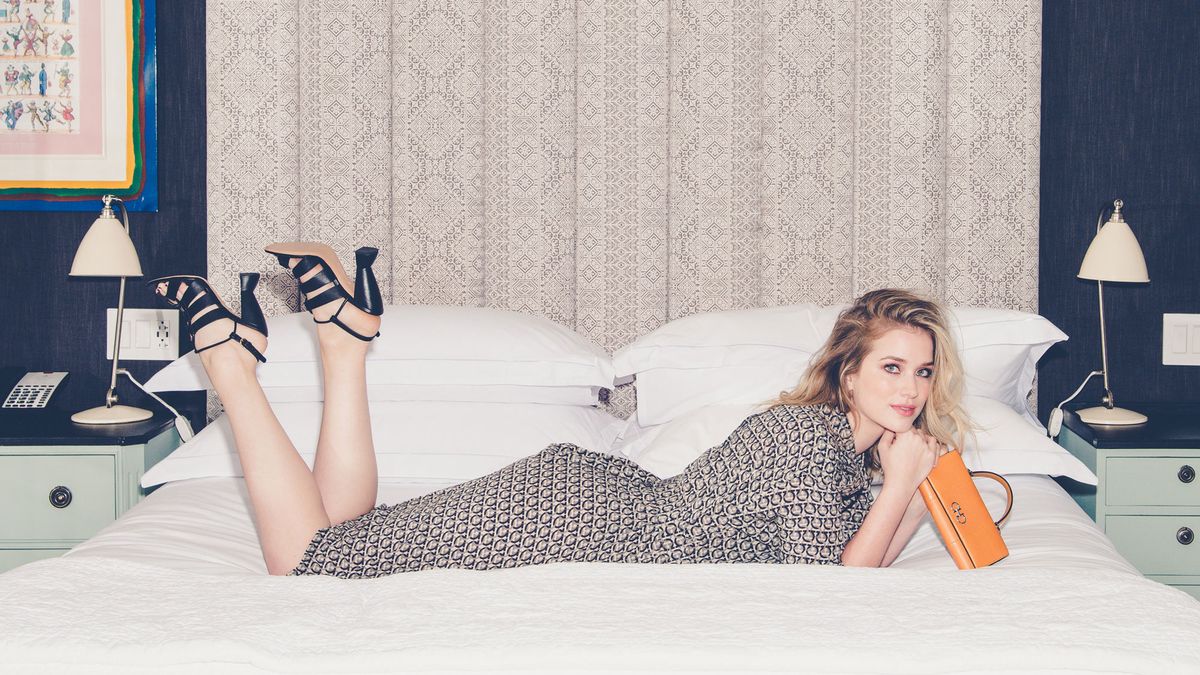 Getting ready with You star Elizabeth Lail before Ferragamo’s NYFW fete. In collaboration with Ferragamo.

Coveteur Team
“Have you watched You yet?”

It’s a question that’s been asked many times at Coveteur HQ over the past few weeks, as the most Netflix-enthused editors among us sing the show’s praises for being addictive, thought-provoking, and incredibly creepy all at once. So, you can imagine our delight when Ferragamo rang us up to chat with it’s star Elizabeth Lail before the label’s New York Fashion Week dinner—a selection of Ferragamo’s newest pieces to fawn over included.

“I’m so drawn to the history of the brand,” Lail told us. “All the old Hollywood actors and actresses wore it. I find that very romantic and I feel really honored to be a part of that.”

Another honor? Landing the role of Beck in You—a young woman who bookstore manager Joe Goldberg, played by Penn Badgley, becomes obsessed with.

“I like to keep my expectations pretty low,” Lail told us of the impact she expected the show to have. “For me, it’s about being a part of the project and my experience on the project, and then after that it’s up to fate, I suppose.”

Fate determined that You would be hit—such a hit that Lail would be among those tapped to help Ferragamo celebrate the house’s new Gancini print. Before she headed to the party at Sant Ambroeus, and before she clinked glasses with women’s collections creative director, Paul Andrew, here’s what she told us about her North Carolina upbringing, her early days in NYC, and her favorite TV show (hint: it has nothing to do with a stalker).
You grew up in North Carolina, right? What was that like?

“Compared to New York, peaceful. [laughs]. I have a really incredible family, that was very supportive. [North Carolina] is where my love for acting started and my love for theater and movies. That’s where it all started.

I was going to ask about that. What initially drew you to the arts and to acting?

“My parents. They’re appreciators. They’re not actors themselves, but they would take me to see theater and I remember seeing a production of Les Mis and it just really moved me. I was like, ‘oh, I want to be up there doing it.’ Then, my mom forced me to audition for a play.”

“Seven Brides for Seven Brothers. It’s also a movie—very old, classic. I was probably 13. I had the smallest part you could possibly have in a play, but I never stopped acting.”
You moved to New York right after college. Do you remember your first month in the city?

“I was glowing! I look at pictures from that time and I think I will never glow like that again. I think I was just bursting with excitement and optimism and joy. I was subletting a room in Queens and learning how to use the subway. Something about New York is very difficult, but when you get a hang of it, you feel very powerful.”

That’s so true. Fast forward to your audition for You. Tells us about it:

“Well, when I first auditioned, I was reading all the cute scenes. I didn’t realize that all the stalking was going on. Then, I read the book in between my first audition and my chemistry read, and that’s when I realized what I was potentially getting myself into. The chemistry read with Penn was really natural and easy, and I kind of expected it not to be that way, because the odds of having chemistry with people are so slim. At least that’s been my experience, but we clicked really easily and naturally. He has a very open heart and he treats everyone the same in this really beautiful way, so I think that makes him easy to connect with.”

What was being on set like? Early mornings? Late nights? Filming all over the place?

“It was all of the above. You kind of have crazy hours—14 hour days. And because [my character] was the one being watched, I was there all the time. For me, it’s a joy, because I love to do it and you kind of learn how to take care of yourself in those extreme conditions. Then, I had really good cast mates and crew that make it really enjoyable.”
How do you take care of yourself when you’re on set for 14 hours?

“You have to really prioritize sleep. I tend to take naps during lunch and I bring my own food, because it’s very easy to just feed yourself out of emotional deprivation. You’re just so stressed, so used up. So the more I can plan, the happier and healthier I tend to be.”

What were your expectations of the response to the show?

“It’s funny because a lot of my cast mates and I were like, ‘This going to have a grassroots following. Very slowly people are going to discover it, and it’s going to be a certain group of people that really enjoy it.’”

“Yeah, it’s amazing. People stop me on the street and they’re like, ‘You look so much like that girl in that show’ and I’m like, ‘yeah, I get that all the time.’”
Is that your standard response?

“It is, because then it’s a fun conversation and not a weird celebrity thing. It’s more fun for me, I guess. [laughs]

Let’s talk fashion. When you’re not working, how would you describe your sense of style?

Let’s pretend that you just got a big check in the mail and you’re going to go to Ferragamo and treat yourself to one thing. What are you leaving with?

“Probably shoes, because their shoes are incredible. There’s nothing like saying, ‘Oh, these are Ferragamo,’ and sticking your leg in the air.”
You’re on your way to a Ferragamo party. In general, are you the life of the party or are you in bed by nine?

“Oh I’m a grandma. I’m socially awkward and I have anxiety about talking to people. In those car rides to events, I’m terrified. But then once I’m there I decided to participate and lean in. I find if you can relax and meet really incredible people, it’s always a gift.”

The party is at Sant Ambroeus. Have you been there?

It’s delicious and the food will be phenomenal, but I’m curious to know, when you first moved to New York, what was your go-to meal? What were you living off of?

“I lived in Queens and there was a halal food truck that is top-notch in the halal world. It’s not just one of the random ones, it was like top ten. It was on my walk from the subway to my apartment and that was always my go-to. That was before I was vegetarian and vegan, but I usually got some kind of falafel over rice. The rack of lamb kind freaks me out a little bit.”
What are your interests outside of acting?

“I’m interested in a lot of political missions, particularly with the environment, and I’m a big animal lover. I have a cat [named] Joe—I’d say she’s my number one hobby. I also do this thing where I try to learn something new every month, so I’ll play a little guitar or learn a little French. Right now I’m learning how to crochet.”

What are you working on professionally? Anything outside of You?

“I am, but I can’t quite say yet. There are lots of surprises to come, I’ll say that.”

Last question—what are you watching on TV right now?

“I watch The Great British Baking Show pretty constantly [laughs]. For me, being a part of TV, when I come home at the end of the day I want to watch something real. Not to say that that show has no contrived elements, I’m sure it does, but most of the time, it feels like you’re in someone’s grandma’s kitchen. Their emotions are real and I just love it.”

Suki Waterhouse Says She Spent 10 Years of Her Life Obsessing Over the Sims
The Star of Hulu’s Latest Hit Is About to Be Everywhere
Sara Battaglia’s Ferragamo Collection Has Arrived
Collabs Film &amp; TV
Part of the series: