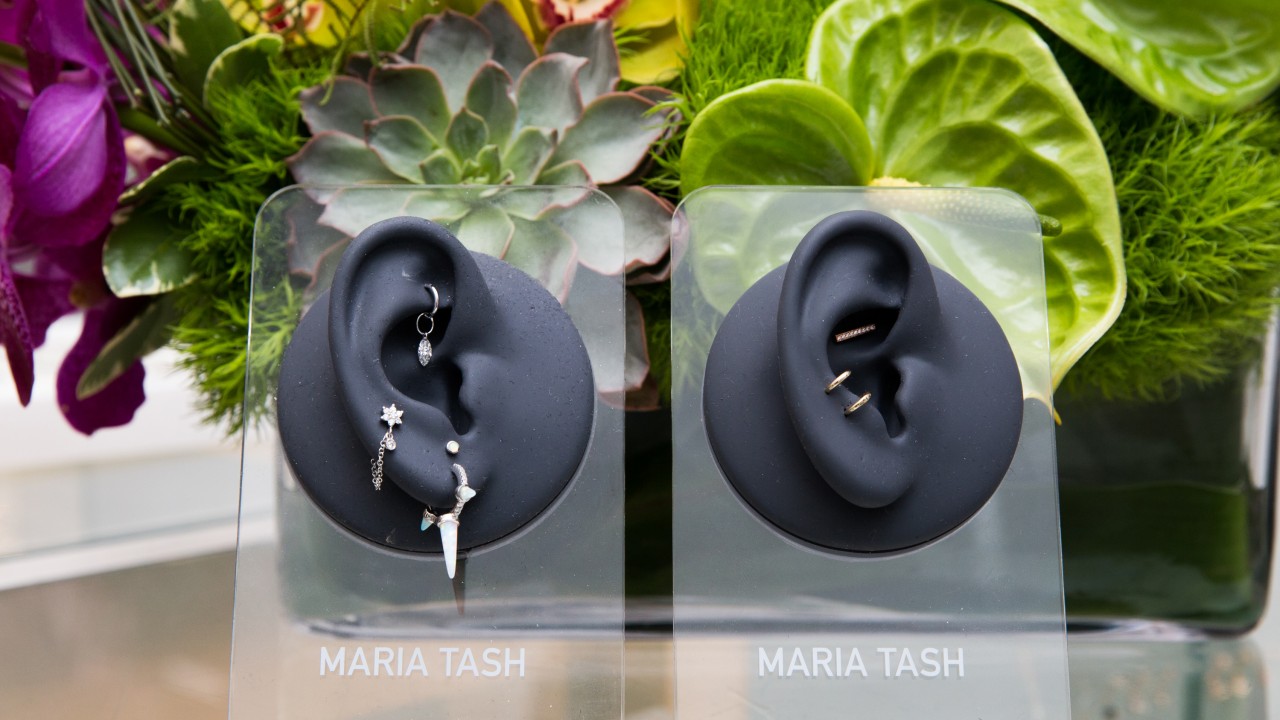 Whether You Know It or Not, Maria Tash Probably Inspired Your Piercing

Her NYC shop is our go-to for all things sparkly.

Maria Tash is the type of person who lights up at the mention of genital piercings. “[My piercer] just told me she did an inner labia piercing,” she says, smiling while we squirm ever so slightly in our seats. “Ear work is still our bread and butter, but it’s sticking around!” Her undeniable enthusiasm has only grown since launching her shop, Venus by Maria Tash (then Venus Modern Body Arts), back in 1992 in New York’s East Village. The groundbreaking piercer, designer, and entrepreneur has developed an easy familiarity with the changing tides of body jewelry over the last 27 years, and recalls when these types of piercings were less shocking and more mainstream. “The ’90s were wonderful because there was so much experimentation. Guys were getting their nipples and navels pierced. It wasn’t just a chick thing.”

Although she may fondly reminisce about more daring body jewelry, Tash is loath to say that any type of piercing is a trend. “I hate that word. I think [piercing] in general has gotten a lot more appreciation, but it’s changed.” With the rise of a new piercing culture that is focused on more delicate, feminine jewelry, the old industrial-steel standard is now a thing of the past. “The jewelry has gotten thinner, prettier, smaller, more fitted. The concept of styling, the curated ear, what we call the couture ear—all these things started happening, and that has changed the appeal.” 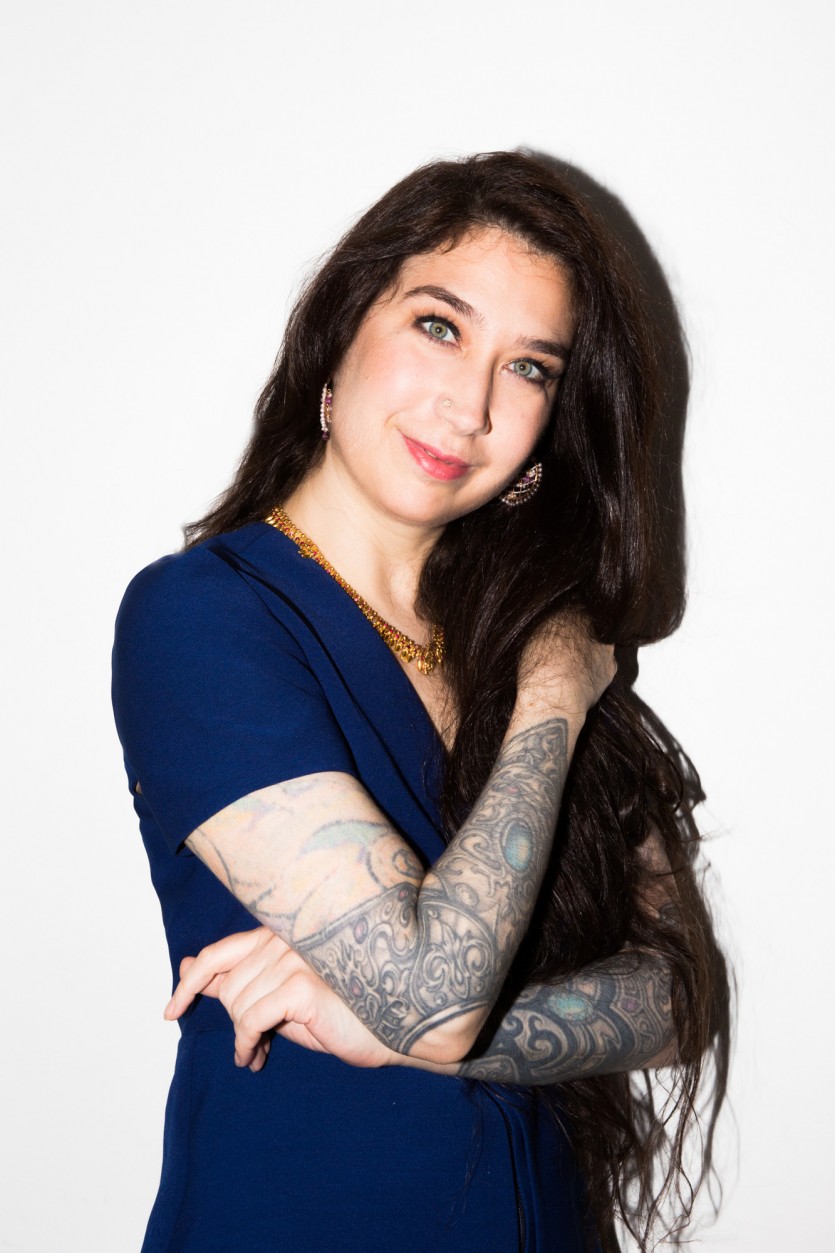 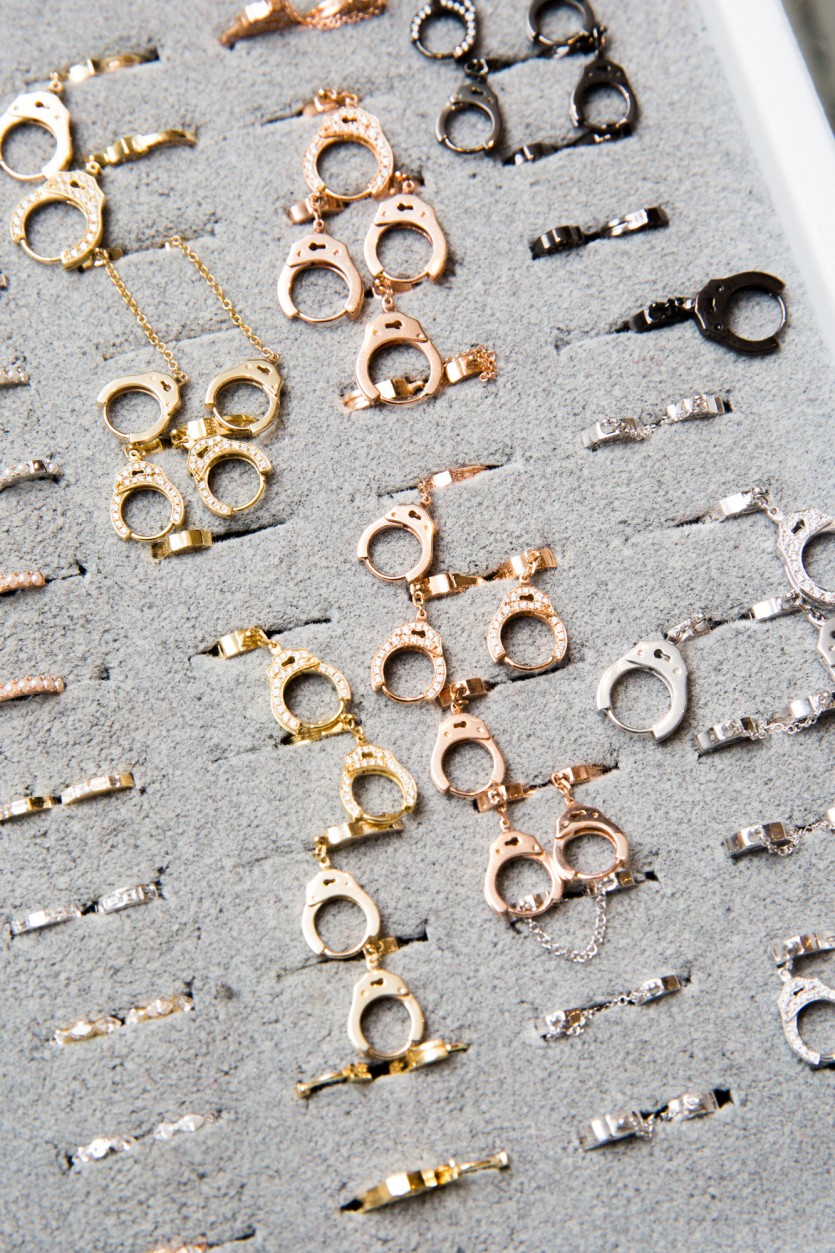 Tash’s own cult-like line of jewelry reflects both her early punk style and her time living in London among an Indi-Pakistani population. “Part of my design sensibility is to analyze what’s most exciting about what people are doing now, as well as looking at the best of history, and then combine it. I think it’s important to mix modern technology with some of the best of ancient traditional stuff, and bring some of those subcultures into piercing, like skateboarding and hip-hop.”

We observe the array of customers crowding around the glass cases in her NoHo shop, selecting their favorites among the glittering spikes and opal hoops. A 16-year-old girl wanting a second hole in her lobes holds up a diamond-encrusted stud to her mother for consideration. “White diamonds are my favorite,” says Tash from behind the counter, and we’re not surprised. “They’re hard, they’re resilient, and they look good on everybody.” It’s almost too easy to reconsider piercings as a valid excuse to invest in diamonds. Tash agrees: “You’ll have a piece of jewelry that will flatter you for the rest of your life.” With an almost dizzying array of options, from the stone to the metal, we had to know what advice the designer gives her piercing clients. “The guidelines [for choosing a metal] are anatomy and complexion. For skin tone, you can break the rules. I love pink gold, but unfortunately it does not look good on my olive skin complexion. Still, I put it on and I love it.” Tash also refuses to believe that there is an age limit when it comes to piercings. “I love women in their 40s, 50s, and 60s. They’re great—they have the money, and they spend it on themselves, and it’s awesome.”

As her piercing and jewelry empire is set to expand to other counties, Tash is most recently learning how to balance her role as CEO with her designer identity. “I don’t see it as a job. There’s no start and end time to the day. I see it as my life’s work. It’s an extension of how I think naturally. I like that people have embraced [the jewelry]. I get out what’s in my head, which is very important to me, and people buy it.” And her favorite part of being a boss? “It’s a great thing that you dream up something that you see, you build it, then people are excited about it, it’s a great process. That’s why I don’t see it as a job. I see it more as a personal growth.”