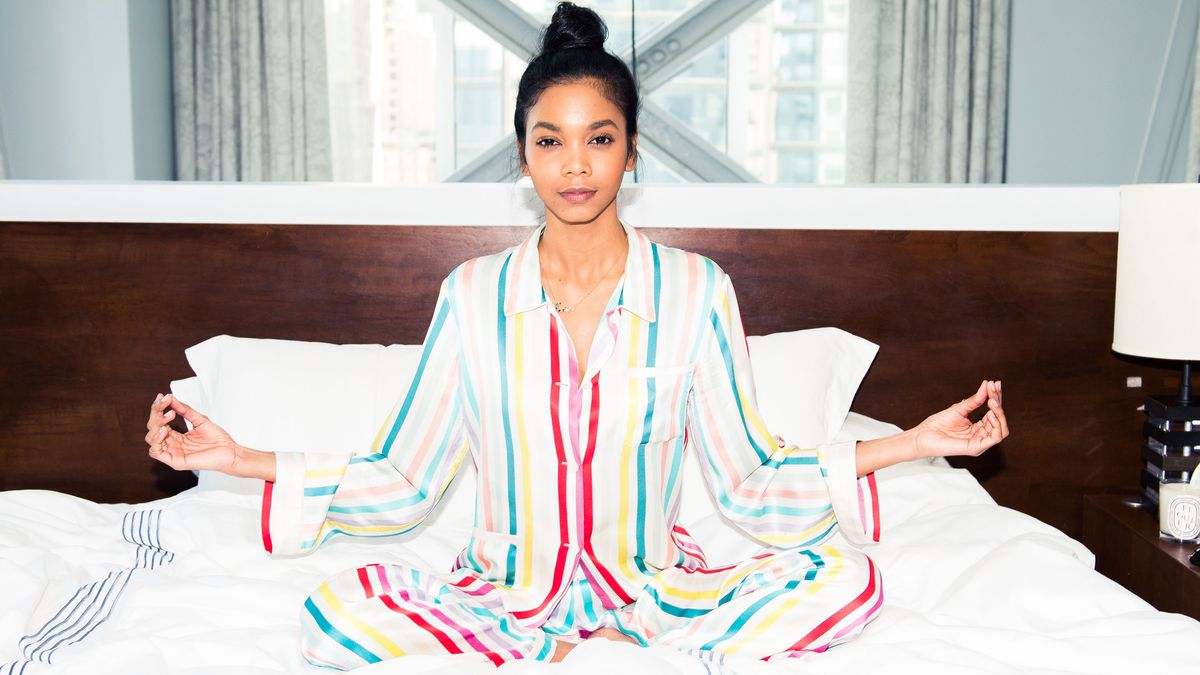 David Lynch Thinks Transcendental Meditation Can Save Your Life

He’s seen it happen with some of the benefactors of his foundation.

Emily Ramshaw
Meagan Wilson
If you’re anything like me (generally busy, stressed, cynical, skeptical—i.e., your run-of-the-mill millennial), you might think of meditation in the following ways: intimidating, boring, questionably effective. All true for me. The thing is, David Lynch, a man whose opinion and taste I trust almost blindly, is an ardent practitioner of transcendental meditation, or TM—so much so that he started a foundation in 2005 (the aptly named David Lynch Foundation) to teach TM to at-risk children, victims of sexual assault, and veterans with post-traumatic stress disorder. If the effects of transcendental meditation are so great as to help people who are dealing with true and otherwise crippling anxiety, surely someone such as myself (someone who is “stressed”) could see serious benefits from practicing. And who better to educate my skeptical soul (and yours) than Lynch himself and his foundation’s CEO, Bob Roth, a man who’s been teaching TM for almost 40 years to everyone from Oprah Winfrey and Ellen DeGeneres to Jerry Seinfeld and Gwyneth Paltrow. Here’s why all these people were convinced of the powers of TM—and why I am now, too.

How did you get into transcendental meditation in the first place?

David Lynch: “It was in 1973, and I had been thinking a lot about learning to meditate, but I did not know what meditation to choose. Then, one day I was talking to my sister on the phone, and I heard something in her voice that I had never heard before. A kind of a real happiness. I asked her about it, and she said she was practicing transcendental meditation. That was enough for me. So I learned on July 1, 1973, on a sunny Saturday afternoon in Los Angeles. My first meditation was like I was in an elevator and someone cut the cables. Whoosh. In I went. Deep silence, so unique yet so familiar. So natural.”

What actually is transcendental meditation, anyway?

Bob Roth: “Transcendental meditation is a simple, natural, effortless mental technique, practiced for 15-20 minutes twice a day, sitting comfortably in a chair with your eyes closed. During that period of time, your active, noisy, thinking mind has the opportunity to settle down, access a level of the mind deep within that is already perfectly calm, settled, and wide awake. You do that through the use of a mantra—in TM, that’s a word or a sound that has no meaning. When you access that state of inner calm effortlessly, research shows your body gains a state of rest deeper than sleep. There’s a reduction of cortisol levels (stress hormones). During a night’s sleep, cortisol levels drop about 10 percent, but during 20 minutes of TM, cortisol levels drop 30-40 percent.

“I want to remove the misunderstandings about what TM is and is not. It’s not a religion; it’s not a philosophy; it’s not a belief system; it’s not something difficult. It’s very egalitarian—everyone can do it as well as everyone else.”

What’s the difference between TM and other types of meditation?

BR: “Research shows, among the legitimate forms of meditation, that there are three basic types. One is called focused attention, a concentration form of meditation, where you’re asked to clear your mind of thoughts or concentrate on one thought to clear your mind. That creates gamma brain waves, and those are 20-60 cycles per second, which shows your brain is working hard. The second is called open monitoring, a mindfulness technique. It’s an observational meditation, when you observe your breath dispassionately to create calm by stepping back. That creates something called theta brain waves, which are 5-7 cycles per second—that’s just sitting quietly, almost pre-dream. The third is called self-transcending, or TM, and that doesn’t involve any concentration or control of the mind. If you use the analogy of the ocean, there are choppy waves on the surface and bigger swells under the surface. With TM, we don’t try to stop the waves on the surface, we just access the silence that lies within, at the depths of the mind. When we sink into that, it creates something called alpha-one brain waves, 8-10 cycles per second, and that’s a state of deep inner calm, reflection, and wakefulness. Physiologically, it gives the body a profound sense of rest and relaxation. The other meditations have their value, but it isn’t to give the body deep rest. TM helps with the elimination of stress.”

What are the benefits of TM?

BR: “The most important benefit of TM is a significant reduction in anxiety. We’re living in an epidemic of stress. When you have a technique that reduces cortisol levels by 30-40 percent, it means a dramatic reduction, within a few days, of anxiety levels. The other benefit is people find they sleep much better. Studies have also found that it’s highly effective at reducing blood pressure and cardiovascular disease. Data also shows an improvement in focus, creativity, and problem-solving abilities. One of the most interesting things is there’s an actual slowing of the aging process—stress is friction to the body. There’s a study that showed that people who’d been meditating for two or three years had a biological age of 12 years younger than their chronological age. What that makes clear is the damaging effects of stress on our bodies. And TM doesn’t just help with stress; it wakes up the creative centers in the brain.”

DL: “TM gives me and everyone else access to a source of infinite happiness, love, energy, and peace that exists deep within every person. It is hard to remember what I was before I started to meditate, but the anger I had before I started transcendental meditation is gone, and I do feel a great happiness and freedom in all the ‘doing’—in my work, in my life.”

What about the David Lynch Foundation? What do you do there?

DL: “I had been reading in the press about little kids coming to school with guns and all the violence in the neighborhoods, and I thought, ‘How can anyone learn in an environment like that?’ So we started the David Lynch Foundation to raise the funds so that any child anywhere in the country could learn to meditate if he or she wanted to. In the past 12 years, we have provided scholarships for over 500,000 urban youth to practice TM, as well as veterans who suffer from post-traumatic stress and women and children who are survivors of domestic violence and sexual assault.

“I remember a veteran who had not been able to sleep for more than one or two hours a night because of the trauma he experienced in Iraq. He started TM with a grant from the foundation, and within one or two days, he was sleeping eight hours a night, right through the night, and that has now been going on for over a year. He stopped drinking and went back to school. He said TM has given him his life back. I always think of that man and wonder how many hundreds of thousands of veterans could be helped by TM if they only had the chance to learn.”

What Happens When You Pay Attention to Your Breathing?
Millions of us Take Benzos—And Overdoses Are on The Rise
How to Help Beat the Sunday Scaries in 60 Seconds
Mindfulness
Part of the series: