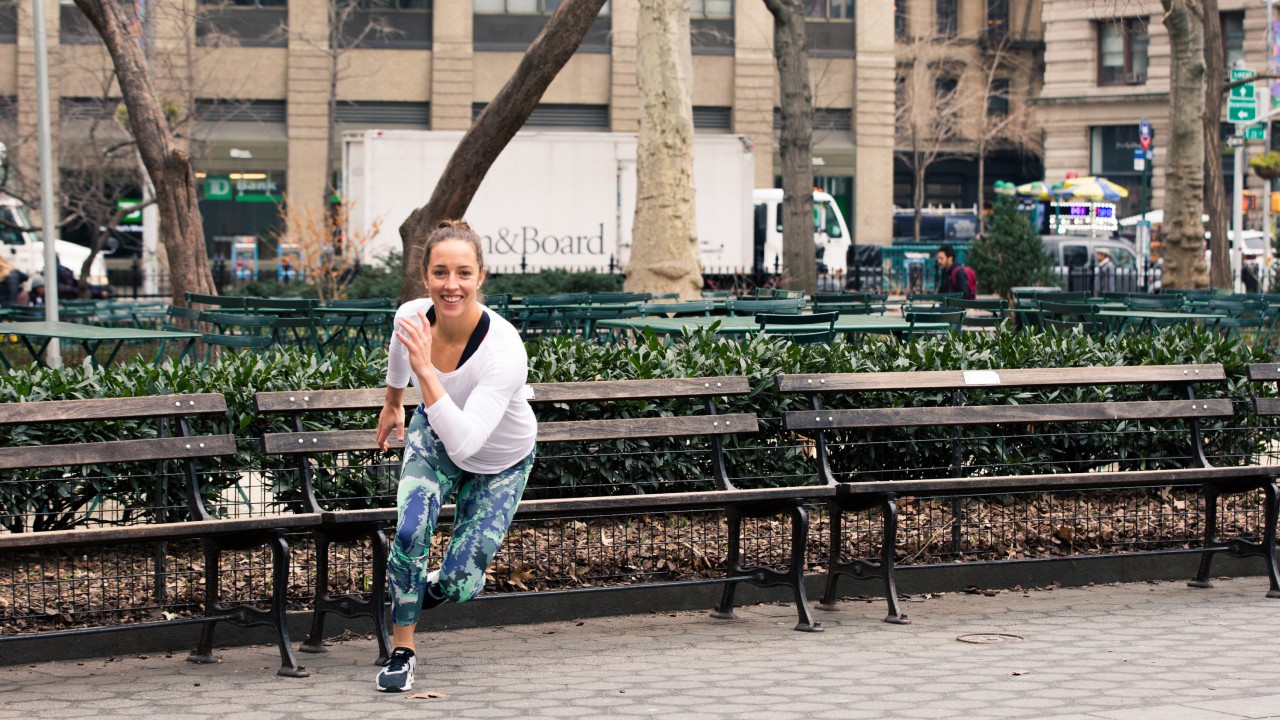 5 (Not-Awkward) Exercises to Do Outside

But are just as good of a workout.

How much better (er, bearable) is a workout when it’s outside in fresh air rather than in the confines of a gym? Even if your gym smells of eucalyptus. The only caveat to getting a sweat on outside (save for running or playing a sport) is that some of the most effective and toning moves are a little, um, awkward to do in front of commuting strangers. Which is where trainer Jill Payne comes in—she put together five butt-kicking (and lifting) exercises you won’t be embarrassed to do in public.

“Sit the hips back and keep the knees directly over the ankles, similar to a dead lift. Come forward, standing all the way up, squeezing the butt tight. Make sure to fully engage the glutes at the top of each rep.”

“Similar to Phoebe on Friends, casually kick out the legs. At the same time, relax the shoulders, arms, and upper body. Shimmy the shoulders like Phoebe. We hold so much tension in our upper bodies, and this exercise allows that to release and also gets your heart rate up. Make sure to smile and feel free!”

“Stand on the outside leg and keep the hips square. Jump to the opposite leg and let the back leg slide behind—similar to ice skating. To increase the difficulty, you can jump higher and further. Push yourself, and increase your energy. Feel powerful.”

“Jump the feet hip-width distance apart. But be careful not to go too wide, as it can be straining on the hips. Touch the ground with your fingertips, and keep your spine straight. Jump your feet together, and bring your arms straight overhead.”

“Start in plank position on the hands and with your shoulders directly over the wrists. Step the left foot wide of the left hand, and thread the right foot through, opening the chest. Keep the right leg and foot close to the ground, and reach as far forward as you can to increase core engagement. Repeat on the other side.”

Thanks to a Resistance Band, You Can Workout Anywhere
Your Multivitamins Can Be Doing More Harm Than Good
Bella Hadid’s Nutritionist on How to Stay Healthy This Summer