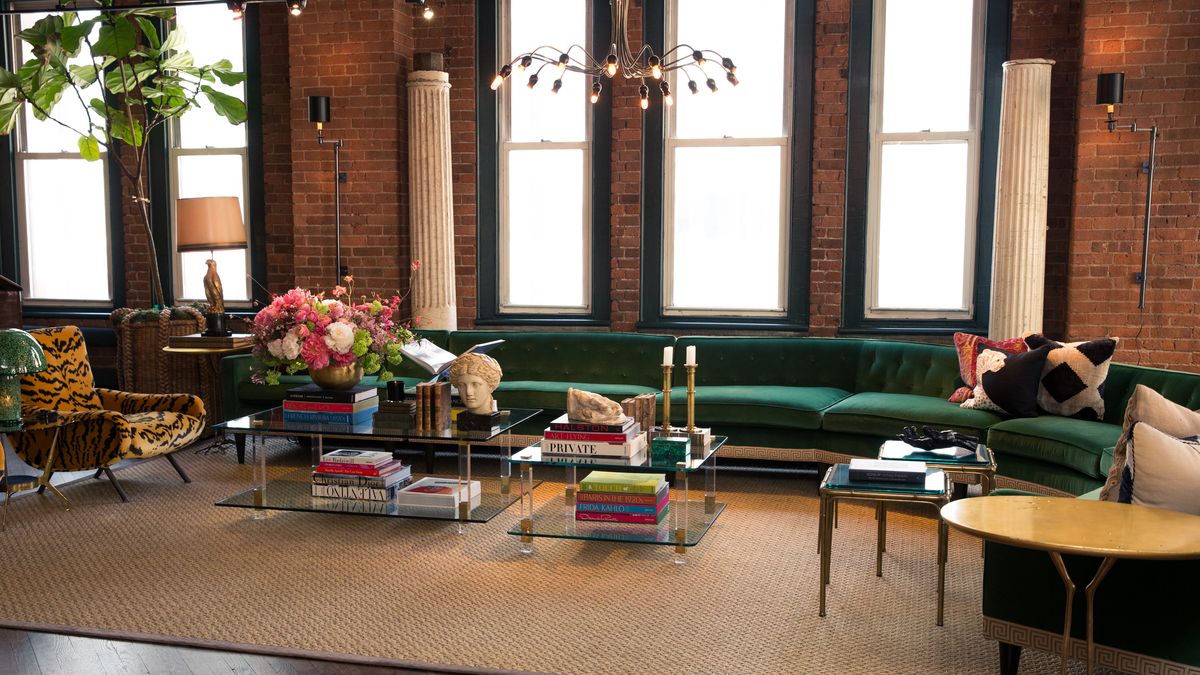 This Loft Is Home to New York’s Best Parties

Just take one look at Ken Fulk’s cobalt croc-upholstered bar stools, and you’ll get it.

Emily Ramshaw
Alec Kugler
Ken Fulk is the kind of person who loves all the things we love (i.e., beautiful things); he’s just way better at putting them together and making them into something truly fantastical. It’s why the interior designer is a favorited contact of everyone from Instagram CEO Kevin Systrom to Sean Parker—he’s the creative eye that pretty much every tech titan goes to when they make it big with a ~unicorn~. And it’s also why we were so excited when we found out that, after 20 years in business, Fulk had finally opened a studio in New York (he’s based in San Francisco, of course) that also happened to double as his own pied-à-terre.

The Tribeca loft, however, is hardly what one would consider a traditional pied-à-terre. “Sprawling” or “grand” or “vast” are a little bit more apt real-estate descriptors. Also: “extravagant” and, if we’re going there, “OTT.” Fulk considers fearlessness to be the most important trait of good interior design—and the man walks the walk when it comes to his own space. See the cobalt croc-upholstered bar stools set at the bar of his truly massive kitchen, the ’60s-era bar cart complete with its own ice bucket, the emerald-green sofa big enough to host its own sleepover. All of it is evidence that not only is Fulk fearless when it comes to mixing eccentric and beautiful pieces (he considers thematic decorating truly horrible), but he also happens to throw a good party—and will probably invite Mario Carbone, of the iconic New York restaurant (that Fulk designed, bien sûr), to cook for his guests. And that’s saying nothing of his closet (to our delight, he was just as detail-oriented in that department). This is Ken Fulk living his truth.

Click through the gallery to find out how old he was when he started having “little blue blazers” custom-made for himself (hint: really, really young), his secret to throwing a good party (tequila is involved), and what he shares with Bruce Weber (besides a love for golden retrievers).
1 / 26
“We always thought we’d need a New York studio. In San Francisco, we work out of an old brick-and-timber building we call the Magic Factory—jokingly, half not jokingly. It’s South of Market in an old industrial neighborhood, and I wanted something that felt like an extension of that vibe. I originally looked all over the city, really concentrating on the Lower East Side, the Bowery. I looked at an amazing, untouched garage that was right at the edge of the water in Two Bridges at the edge of Chinatown. But my friends were like, ‘I hope you know, other than your opening party, nobody will ever come see you.’ And so I had a friend who was a Realtor, and she asked if I’d ever look in Tribeca. I didn’t really know Tribeca.”
More From the series Interiors