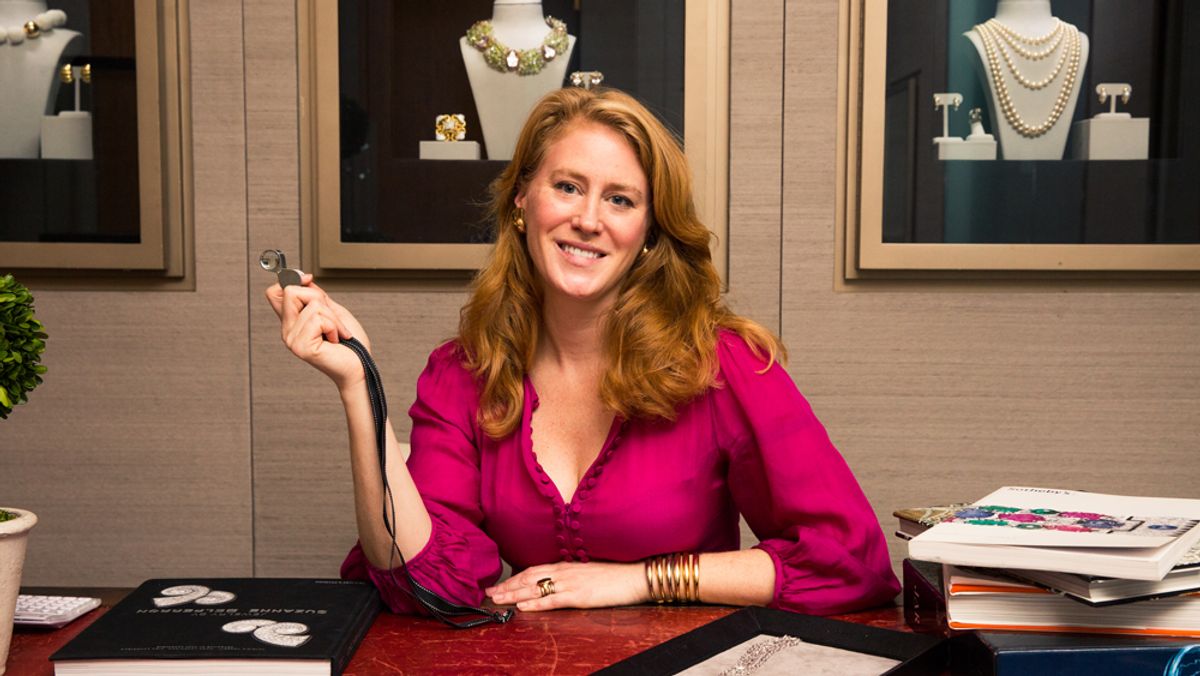 Tales from the Gatekeeper to the World’s Most ‘Magnificent Jewels’

This story starts on a cold, rainy morning in April. For those who know Manhattan, Sotheby’s is located on 71st and York Avenue—for those who don’t, that’s just left of off-the-beaten-path. It’s also home to some of the most thrilling treasures *not* housed in the Metropolitan Museum of Art, and a place I’ve desperately wanted to gain entrance to for years. So I hardly minded the fact that I showed up practically soaked.

I was given a private tour of the Magnificent Jewels auction and was actually allowed to touch the Stotesbury Emerald with my very own hands. Read all about that particular gem here—it’s fascinating! I was shocked that I could just stroll in to Sotheby’s and manhandle these antique and insane jewels—but, surprise, you don’t have to be an editor at Coveteur to do that. Starting on Monday, July 10th through the 14th, Sotheby’s’ preview for their online jewelry auction opens to the public, and within visiting hours literally anybody can go in and touch and try things on. Yes, that means anyone.

I was hooked, so I did what any journalist with antique cushion-cut D-color Internally Flawless fantasies would, and rang up the jewelry department at Sotheby’s. Which is what brought me to a private room with Catharine Becket, allowing her to drape a multi-strand pearl-and-diamond David Webb showstopper around my neck.

Becket is the senior vice president of jewelry at the legendary auction house, and it’s her responsibility to find all of those magnificent jewels that make their way to auction. She’s effectively the secret keeper of the most major jewelry collections around the country, and seems to have an open invitation to dive headfirst into their vaults.

Talk about a dream job, right?

And that’s exactly what we did—we talked about her dream job.

“I always loved the arts. Even from when I was a really little kid, I loved the idea that something would have a history behind it. My grandmother would say, ‘This spoon belonged to your great-great-great-great...’ The idea that I was using a spoon that was used by a relative 200 years ago I always thought was so fascinating. The connection it gives you to history. So my first job out of college was at Sotheby’s in the Russian Works of Art department.”

The thrill of the find:

“I was in Boston a few years ago, and I was told there was a woman that wanted to come in with some brooches. She brought in the two brooches, but then, she takes out this bracelet. It has carved rubies, sapphires, emeralds and diamonds. I look at it and I’m just thinking, ‘Is she serious?’

“I’m looking and looking at the piece for some kind of mark on it. I’m looking for ‘Cartier.’ There’s nothing on it. [I thought it was] just the best ‘inspired by Cartier’ tutti-frutti piece I’ve ever seen. So I said, ‘I would recommend placing an estimate of $20-30,000 on it, and we would love to feature it in our September sale.’

“We brought it back to New York, and we have our little geek squads [for ID-ing jewelry]. I said, ‘Prize to whomever can find ANYTHING that resembles a signature or mark on this!’ Because in this world, just like with paintings, that signature means a lot. It can add a lot of value to a piece. But nobody could find anything. It went from desk to desk to desk. Then it finally landed with Carol Elkins, who is one of our senior specialists who has been in jewelry for 30-plus years, and she was holding it up to the window with tons of light, and she found a very faint I-E-R.

“I rushed it off to Cartier, and they gave us a certificate for the bracelet indicating that it was made at Cartier in New York in 1928. So I called ‘Mrs. Smith,’ and I said, ‘I have great news, we have found a faint signature, Cartier has confirmed that it was made by them. We recommend raising the estimate to $200-300,000.’ She was thrilled! And because it’s now a Cartier tutti-frutti piece, which is like the holy grail of jewelry, we put it on the cover (of the catalogue). It went for over $800,000. [Ed note: see a picture of it here.]”

The piece that got away:

“When I worked in Russian Works of Art, I remember I saw this little Fabergé cigarette lighter in strawberry enamel, which is this lovely shade of red over gouache ground. Just the color and how the light interacted with it—I asked my boss at the time, ‘What’s this cigarette lighter? It’s been here forever, but it’s never been in a sale.’ He said, ‘Oh that...went unsold in a sale a few years ago. It’s chipped.’ With enamels, it’s very important that the condition is pristine. So, I asked what it was worth, and he gave me a figure and said, ‘Well, if you want, we can make an offer.’ And I thought, ‘I could have this cigarette lighter, and I don’t even smoke, or I could pay my rent.’ I really, really thought about it. I went with rent. But I regret not buying it. I just think how amazing it would be to have this piece that was owned by the Russian aristocracy in the early 1900's, and this wonderful, precious object. I’m like a human magpie.”

What to look for if you want to take the plunge and buy some gems yourself:

“I think you should always look towards something that’s well made. Let’s speak specifically to fine jewels as opposed to costume jewelry. Unlike contemporary art, where one person might think, ‘That’s horrendous,’ and another person sees promise in it, it’s pretty safe to say that if you look at a jewel and you think it’s poorly made, that someone 20 years from now is going to look at it and also think it’s poorly made. So look for something that’s well crafted, and of course you have to learn how to identify something like that. And one way to do it is to come to a Sotheby’s and look at the pieces closely [during previews].”

The schooling involved in getting a job like hers:

“I got my masters in Victorian paintings, but I realized I really wanted to focus more on precious objects and decided to further focus on jewelry. So I went to the G.I.A. and got my Graduate Gemologist degree. I definitely wasn’t a girly-girl, and never in a million years would I have thought I would end up in jewelry. But I think when I was younger, in my 20s and first in the working world, I didn’t appreciate how much there is or was to jewelry. It’s so much more than a pretty stone. There’s the design behind it, the history behind it, the manufacturing. I think just like anything, the more you know about it, the more you appreciate it. So the more I learn about jewelry, the more I want to be involved in it.”