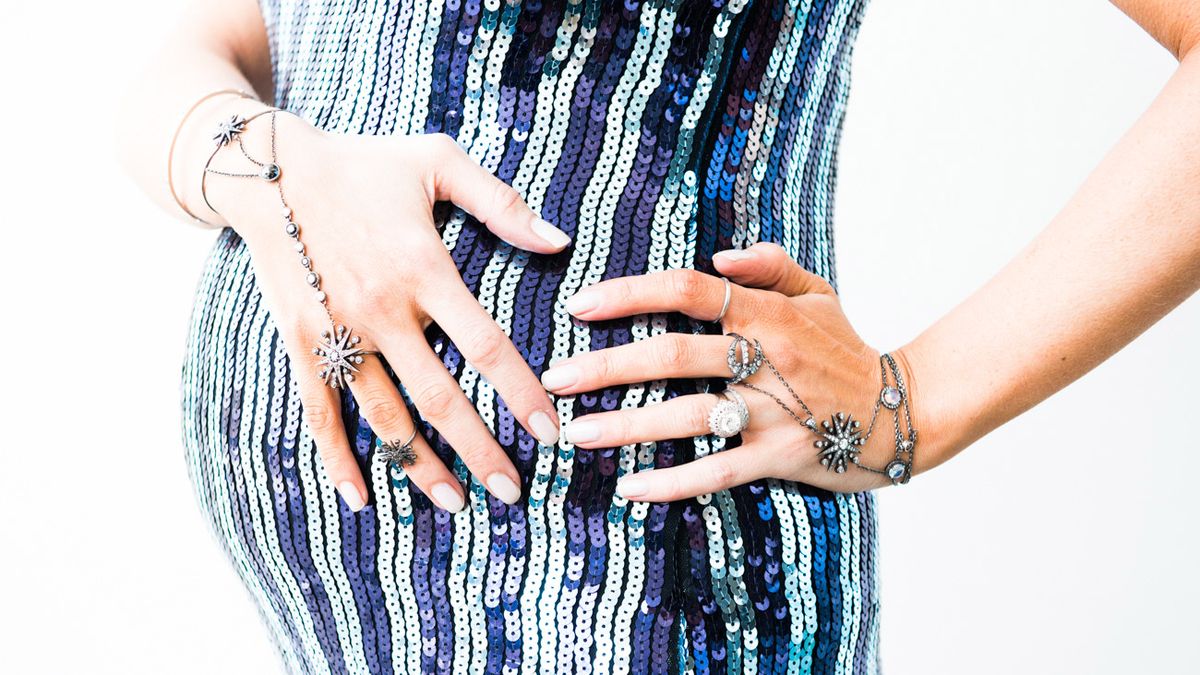 Before I say anything, let me start by making it clear how much I love my kid. I won’t say my life didn’t start until I had him, but it has changed 100 percent for the better. He’s a tiny squish of baby, and every time he falls asleep on my chest or smiles at me when I enter a room, I fight the urge to stuff his entire body in my mouth and hide in a forest alone together, forever. I want to hit pause on time so I can continue rubbing his puffy little feet all over my cheeks every day for the rest of my life. Everything from his male-pattern baldness to his overbite to his little sticky bun-shaped belly button makes me feel insane with joy.

However, it was not always that way! He’s 11 weeks old now, and if I’m being completely honest, the first three weeks were difficult/impossible/fairly miserable. To call motherhood a big adjustment is the understatement of my life, and I really struggled with the transition.

But now I’m on the other side, and watching tiny baby Ellis, Sweet Prince of Tribeca: Ruler of my Heart and of my Apartment, make his little squeaky grunting sounds while trying to master tummy time, I feel endlessly grateful for him and for everything I’ve learned.

BEING A NEW MOM IS F*CKING HARD

Like, really, really hard. I was lucky enough to have my mom come visit for a week when he was just four days old, and my husband is an angel and does nighttime feeds, takes out the trash, brings me snacks, and is generally great. Having someone make sure I was eating those first few days was a lifesaver, not to mention having someone to hold him long enough for me to take a shower. So if you can have your family come, or your partner’s family, or have a serious talk with your SO before the baby arrives about your expectations re: division of labor, do it.

But after my mom left, I started waking up with a pit of anxiety in my stomach every morning. I cried all the time. I cried more than I did anything else. I cried on Ellis’ sweet little face while trying to get him to nurse (more on that later), and the second my husband came home from work every night I cried some more. It was dark. Really, really, dark.

Everyone kept telling me, “Your hormones are out of control,” and sure, yes, they definitely were, but also I just had a fucking baby! I had to adjust to the fact that never again would I be able to go get a coffee when I felt like it, spend many blissful hours scrolling uninterrupted through Instagram, or do anything on my own. I couldn’t even pee when I needed to. When the baby is brand-new and so, so small, you feel afraid to set him down or let him cry. And it’s kind of awful! It’s not *just* the hormones, it’s also the fact that life as you knew (and probably enjoyed) it is 1,000 percent over. If you need to, allow yourself to grieve the loss of your former life—it might feel a little like grief.

Anyway, the point is, you might need to cry 22 out of 24 hours of the day, you might doubt your ability to do this, and it might not just be hormones. If you feel like you need help, get help. It makes the wonderful part of motherhood come much sooner.

Before I had the baby, I thought there was no way I was going to let myself obsess over him nursing. WRONG! Oh man, did I obsesses. I lived at the bottom of an anxiety spiral for a very long time. I had two different lactation consultants come over a total of five times. We tried craniosacral therapy. I had his tongue and lip ties released (I sobbed hysterically, it was not pleasant). And still, I’ve spent more hours than I’d like to admit trying to entice my screaming infant to put my boob in his mouth.

Three months later, sometimes he’ll do it, sometimes he won’t, and it’s still a vaguely awful feeling when he cries and pushes me away—I’m not used to working so hard at something and not being successful.

If I could go back in time, I’d tell myself to keep trying, but to chill. I think part of the obsession is that it’s really the only way you can interact with your baby before they start smiling or get somewhat activated. Just be patient, there are more rewarding things than having your kid drink from the source, or get breastmilk in a bottle, or whatever the situation is. There are great formulas on the market now. I have to keep reminding myself that literally the only person who cares how or what he eats is me. I’m pretty sure he doesn’t know the difference.

YOUR BIRTH PLAN MIGHT BE MORE OF A BIRTH FANTASY

I “planned” on having an unmedicated delivery in which I “hypnotized” myself into not feeling pain. Hahahaha, I had a rush C-section three weeks early when I went into labor with a breech baby and literally didn’t feel it, but happened to be going in for blood work, so thank god my doctors realized what was happening.

I was really sad to have to have surgery, but truly, it wasn’t that bad. By eight weeks I was exercising again, and everything was normal.

If your birth experience doesn’t go the way you hoped, consider it the first major lesson in ~letting go~ as a mother. A lot will be out of your control.

SLEEP WILL SAVE YOU

I didn’t understand the emphasis on baby’s sleep until I had one—them sleeping means you sleep. And when you’ve gotten some sleep, everything else feels so much easier. Everyone will tell you to sleep when the baby sleeps, but hahaha, that’s hilarious, it doesn’t work.

The first week or two are a mess, and you can’t expect to get more than two hours at a stretch at night, but then I promise they’ll start to go longer stretches. The first time you get a solid four-hour block, you’ll feel like a new person.

If you can’t sleep, try to get a 10-minute shower in once a day. It has similarly restorative properties.

WHEN THINGS GET TENSE WITH YOUR PARTNER, HUG THEM

Trust me, you do not want to be in a fight on top of everything else. When you feel like you’re going to lose it, stop and propose a hug instead.

ABSOLUTELY NOTHING WILL GROSS YOU OUT ANYMORE

When Ellis learned about projectile vomiting, he really excelled at it. I got barfed on two nights in a row with more barf, more forcefully expelled than anything I’ve ever witnessed or experienced as an adult. Truly, it seemed like GALLONS of puke. Gallons!

Then there are the diaper blowouts, which I won’t go into detail about, but just know that what goes in the diaper doesn’t always stay in the diaper, or in the pants.

I was so deeply grossed out by baby vomit and dirty diapers before I had my kid that I questioned my ability to be a mother. But now? Eh. As long as he’s not actually sick or struggling (because gallons of vomit doesn’t necessarily mean sick in Babyland!), we just keep moving.

The sub-lesson here is to ALWAYS bring two changes of clothes for him, and if you’re going to be out for a really long time, consider bringing a change of clothes for yourself, too.

PEOPLE (STRANGERS) LOVE TO GIVE YOU ADVICE

And you don’t have to listen to any of it! Some may be helpful, but sometimes you just have to smile politely and say, “OK, I’ll try that,” and then move on. When my son’s belly button was first coming together, someone told me that it was an outie because he cried and screamed too much. OK!

IT REALLY, REALLY, TRULY, HONESTLY, ABSOLUTELY WILL GET EASIER

People kept telling me that, and I was always like, WHEN?!?! For me, it was around the four-week mark. I started feeling like I knew him a little better, knew what I was doing a little more, and he was also sort of activated. When he started smiling, it was truly one of the best feelings I’ve ever had. Every time I get that weird, toothless little grin, it still makes me feel insane with love.