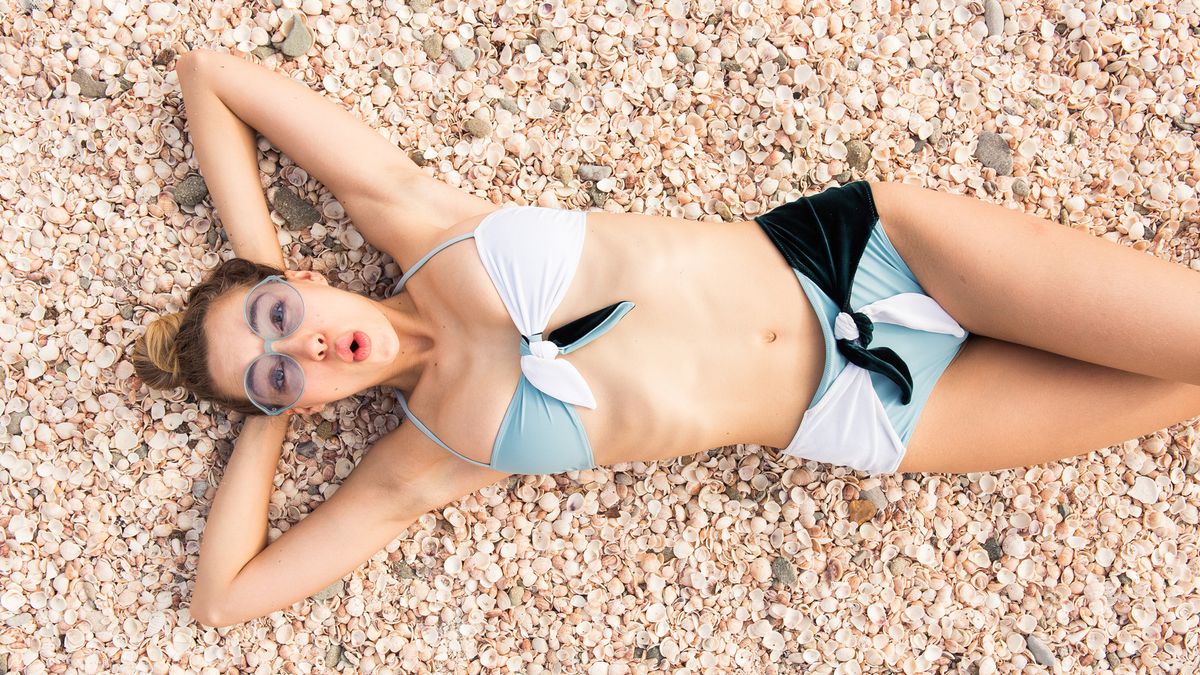 We don’t blame you. Some experts think certain sunscreens can be harmful to your skin and the environment.

We’ll admit: This time of year, we are over-the-top obsessed with sunscreen. We know sunscreen is considered the gold standard to protect us against aging and skin cancer, but we’ve also been hearing a whole lot about toxic sunscreens (talk about alarming), which got us curious. While the idea of FDA-approved sunscreens being harmful to you is a highly controversial topic (and, let’s level with you here, your derm is the best person to help you pick out the one that is right for you), we decided to turn to a few of our trusted sources to hear what they had to say on the subject. We drilled each and every one of them on all of our burning (no pun intended) questions and took away the important notes below.

Like everything else in the beauty and skin-care world, there has been a huge interest in naturals. Natural sunscreens contain physical or mineral protectants zinc and titanium dioxide. What makes them different from the plethora of chemical sunscreens? “Mineral sunscreens sit on the top of the skin and deflect damaging UV rays away from the skin—they are mainly made up of titanium dioxide and zinc oxide,” explains dermatologist Dr. Dendy Engelman. “Chemical sunscreens work by absorbing UV rays, converting them into heat, and then releasing.” But some feel that not all players are equal between chemical and physical. “The most important difference is potential toxicity, as there is an abundance of concern surrounding chemical sunscreens, and photostability,” says Hillary Peterson, president and founder of natural skin-care brand True Botanicals. “A safe sunscreen should not break down in the presence of UV and thus generate free radicals.”

Zinc, which is used in many mineral sunscreens, works to deflect UV rays, and there is also “no issue of zinc being absorbed into the bloodstream,” Dr. Engelman explains. The only issue seems to be if you don’t apply it properly: “If the product is not applied generously and all over, UV rays will penetrate in between the molecules resulting in incomplete protection,” she explains. But such is the case with most formulas—solid application is everything.

What some find concerning is that the list of ingredients in chemical sunscreens (which, remember, absorb UV rays) reads like a letter scramble. Co-founder of skin-care salon Tracie Martyn, Marius Morariu, rattles some of those ingredients off for us. “Octinoxate, oxybenzone, avobenzone, octocrylene, octisalate, homosalate, benzophenone, and methyl anthranilate [are] a few of the highly questionable petrochemicals,” he says. Considering all of that can easily go over our heads, we got Dr. Engelman to explain further: “These are chemicals derived from petroleum. They can be harmful to the environment and can be endocrine disruptors when applied in large amounts. I recommend physical blockers [like] zinc oxide and titanium dioxide in order to avoid the potential harm that chemical sunscreen ingredients can cause.”

Some Can Enter Your Bloodstream

“Sunscreens commonly include ingredients that act as penetration enhancers and help the product adhere to the skin,” says David Andrews, senior scientist at the Environmental Working Group in D.C. “As a result, many sunscreen chemicals are absorbed into the body and can be measured in blood, breast milk, and urine samples.” This is why experts believe we don’t need to ingest something for it to affect us internally; topicals can enter our systems, too. And let’s not forget that you can potentially inhale any spray product that you use like hairspray, perfume, dry shampoo, and, of course, that sunscreen mist.

Oxybenzone May Be the Biggest Worry

While the ingredient list of both mineral and chemical sunscreens can run fairly long, one ingredient in particular is the talk of many major discussions around chemicals in sunscreen: oxybenzone. Peterson feels strongly about it: “Based on the most recent research looking into the endocrine disrupting chemicals used in UV filters, I would absolutely not use a sunscreen made with oxybenzone,” she says. “More research needs to be done, and in the meantime, I would not want our customers, my friends, or my family to be part of the experiment that we [would be] conducting by using these ingredients.” Though it falls under what are called chemical sunscreens, an interesting thing about oxybenzone is that it’s technically naturally occurring. “‘Natural’ is a complicated label,” explains Dr. Engelman. “Oxybenzone is naturally occurring, yet there is controversy over this ingredient. The safest bet is a mineral sunscreen with zinc oxide and titanium dioxide.”

EWG recommends avoiding oxybenzone as well, saying the ingredient can also cause allergic skin reactions. “There is no end to the tricks that endocrine disruptors like oxybenzone can play on our bodies,” says Andrews. “[They can] increase production of certain hormones, decrease the production of others, interfere with hormone signaling, and may tell cells to die prematurely. The harmful effects of hormone disruption will differ depending on the amount of the chemical that enters the body, as well as the sex and age of the person who is exposed.” He echoed Peterson’s point that “more study is needed to determine exactly how oxybenzone may be disrupting normal hormone activity and to what extent, but in the meantime, we recommend using an alternative ingredient.”

Added fragrance—an ingredient name that can hide secretive formulas—has its own risks. “We highlight synthetic fragrance as one of the number one ingredients to avoid in all products,” says Peterson. “Phthalates and other fixatives commonly found in fragrances have been linked to reproductive disorders, endocrine disruption, and allergies.” The fragrance controversy definitely sets off alarm bells for others, too. “What you will not find on labels is about 5,000 different chemicals (including hormone-like and hormone-disrupting phthalates and synthetic musks) that can hide under the name ‘fragrance,’” he tells us. Adds Andrews: “‘Fragrance’ is a catchall for a secret chemical cocktail that may contain individual chemicals associated with allergic reactions and hormone disruption. Some fragrance chemicals have not been assessed for safety.”

So not only can these mystery ingredients potentially disrupt your hormones and cause allergies, but “many of the scent chemicals used in fragrance formulations are unstable and tend to oxidize and break down when exposed to sunlight and air, during storage, or when applied to human skin,” explains Dr. Engelman. “Oxidized fragrance ingredients can act as potent sensitizers and phototoxic agents. Recent in-vitro studies have suggested that exposure [of] common fragrance compounds to UV light can cause direct cell damage and cell death.”

The Environment May Be at Risk, Too

“According to the authors of a study led by a team of international scientists, which includes University of Central Florida professor and diving enthusiast John Fauth, ‘the chemicals in even one drop of sunscreen are enough to damage fragile coral reef systems,’” says Morariu. “Some 14,000 tons of sunscreen lotions wind up in coral reefs around the world each year. ‘The researchers found that oxybenzone...is in high concentrations in the waters around the more popular coral reefs in Hawaii and the Caribbean.’” The concern is so high that Andrews tells us Hawaii considered banning the ingredient. Morariu explains that the way the ingredient hurts the reef is by leaching to it, stripping it “of its nutrients and bleaching it white.” The study he refers to above also showed that oxybenzone “not only kills most of the coral, but causes DNA damage in adults and deforms the DNA in coral in the larval stage, making it unlikely they can develop properly.” To drive the point home, Morariu adds, “the highest concentrations of oxybenzone were found in reefs most popular with tourists.”

What You Should Buy

While we’ve told you a whole lot about what you shouldn’t buy, stress not, because there are still options out there to save your skin from the sun’s harsh UV rays that you may consider less risky. “At the current level of research and studies, zinc oxide-based physical sunscreens are the safest choice over chemical sunscreens,” Morariu says, sharing his opinion. “We recommend zinc oxide over titanium dioxide for a few reasons: titanium dioxide only blocks one form of UVA light (UVA2) and UVB, [while] zinc oxide blocks both UVA1 and UVA2, plus UVB.” While Morariu is strongly opposed to chemical sunscreens, Dr. Engelman recommends products from both sides. “While [neither is] perfect, my main focus is to prevent sun damage that could turn into cancer or another fatal disease,” she said. “Using the both together ensures full protection. For those concerned about chemical sunscreens, look for products that do not contain oxybenzone.” While Morariu gives a thumbs-up to zinc oxide, he also suggested that “the formulas should contain plenty of antioxidants (stabilized vitamin C, resveratrol, green tea, bilberry, astaxanthin, glutathione, superoxide dismutase, lycopene etc).”

Editor’s Note: As ever, we are not doctors or medical know-it-alls. And everybody is different, so make sure to check with a doctor before trying anything new.