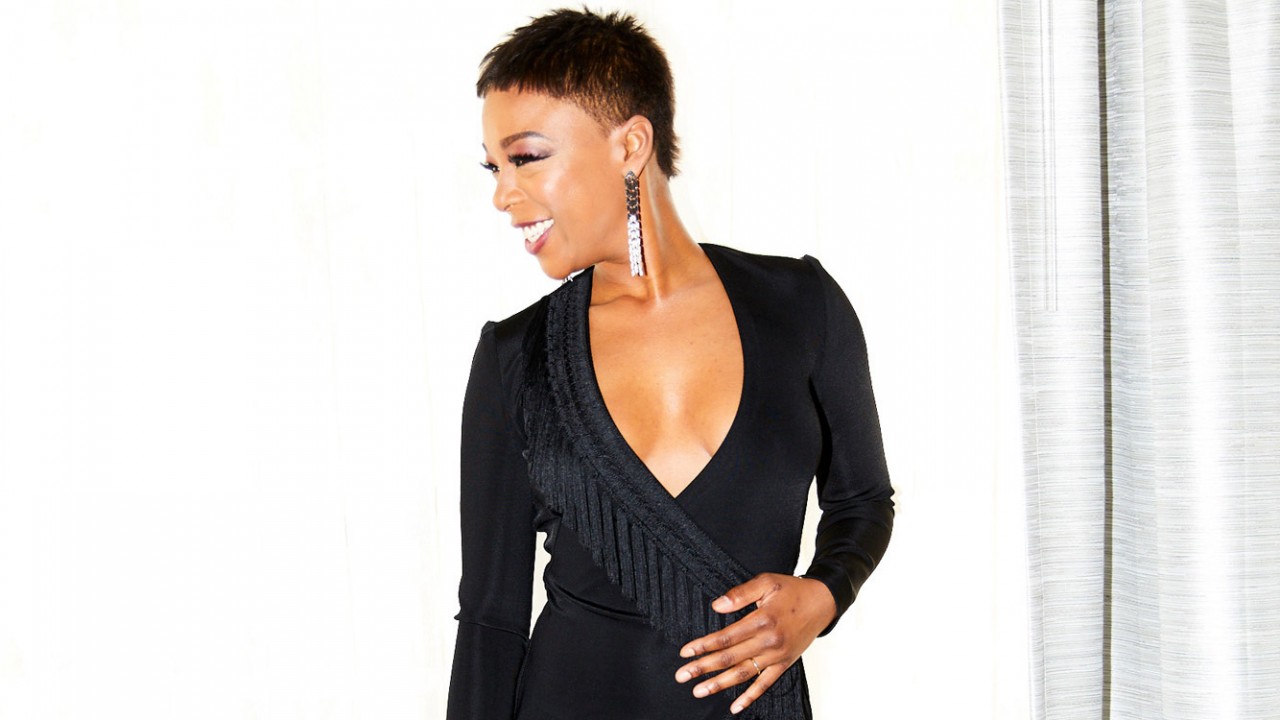 She told us as she got ready (with her wife, Lauren) for the season 2 premiere.

After watching the season one finale of Hulu’s The Handmaid’s Tale, it took about two seconds for us to crave more. Not only is the show highly addicting, keeping us on the edge of our seats with every twist and turn, this dystopian near-future—where women struggle to have rights in a misogynistic, patriarchal society—seemed eerily real, in a this-could-definitely-sort-of-happen kind of way.

Samira Wiley, who plays Moira in the series, agrees. As she got ready for the show’s season two premiere event in L.A. alongside her wife, Lauren Morelli, she told us just how much she relates back to The Handmaid’s Tale thanks to current events. Of course, we discussed happier things as well—like why she chose that tight black dress for the red carpet, how she feels when people obsess over her relationship, and if she has any lighthearted projects in the works to balance things out.

“I’m wearing a tight, form-fitting, short black [Galvan London] dress that has long sleeves. Honestly, it just makes me feel powerful. It makes me feel like a badass woman. It’s sort of militant even, and it seemed appropriate for The Handmaid’s Tale.”

“I have been working now for a while with my makeup artist, Marlene Reiner, and my hair guy, Johnny Wright, and we’ve sort of finessed our routine. Marlene has this special chair that she brings in, and we put on on some music. I usually hook up my phone to the speaker or the Alexa—we just got an Alexa, those things are cool—and we usually just put on a playlist.”

“I always play DJ. I always play DJ. We get the vibe right; sometimes we have to skip around. Sometimes there are frowns involved if we don’t find the right music at first. But we get it, we get in the groove, and then we share stories pretty much the whole time. Johnny used to be Michelle Obama’s hairstylist and has been all around the world, and we just sit down and share stories.”

On people being obsessed with her relationship with her wife, Lauren:
“It’s so many things all at once. It’s so cute, it’s so flattering, it’s so humbling, but it’s also a little creepy and weird sometimes, you know? When people are like, just uber, uber obsessed. But I didn’t have a queer, interracial couple in the media that I could look up to when I was a young person. So to be able to be role models in that way, and to be visible, even, for someone to point to and say, ‘Look at them! I’m like them, and they’re up there, they’re doing it,’ I’m happy to be able to be the face for that, and she is, too.”

Whether or not she and her wife coordinate outfits:
“It is cheesy…and we do it anyway! It might be cheesy, but we don’t really care. I want to look coordinated when we’re walking down the carpet.”

“It’s kind of hard to not relate current events back to what’s happened in Gilead these days. I do that all the time. The feelings, the emotions and stuff that I bring to my character from one scene to the next isn’t necessarily different from the feelings that I feel as Samira, waking up and reading the news, because of what’s happening right now and what’s happening, in parallel, on the show.”

“My life has changed, and I think one of the biggest things that’s changed is how I think about my own voice as it relates to activism, speaking out, using this platform that I’ve been given. I can look at playing Moira in this show and relate that directly to how I feel about activism now in my own life. This show has made me so aware of things that are going on in our country and also globally. The main thing that I’ve gained being in the show, personally, has been my outlook on using my voice.”

“We’ll definitely see more of Moira [in season two]; she, obviously, is hanging out in Canada. We’ll see sort of the ups and downs of refugee life there, because she’s escaped—she’s not under this horrible regime anymore, she’s got access to healthcare, she’s got access to all these wonderful things—but on the other hand, she’s completely lost. She doesn’t have anything around her that’s familiar. Her family that she knows, whether that’s blood-related or not—June, I think, I’d definitely call her family—is still in Gilead. She’s got questions about ‘How do I live here? Who am I? Do I try to go out on a date with somebody now? What do I live for?’ There are questions, and many, many, many more questions than answers.”

Whether season 2 will be just as chilling as the first season:
“Well, number one, season 2 is bringing it—for sure. Like, for sure, for sure. Episode one is going to knock people off their feet. This season is going to show people, even more, how amazing this show is, how amazing this world that Margaret [Atwood] has created is. It might even go a little deeper than people want to go.”

If fans of the book will be left satisfied, now that the show has moved beyond the book:
“I definitely hope so. I know Margaret [Atwood, the author,] was, and that’s definitely where we like to start. We want to make Margaret happy. She’s done such an amazing job creating this world. It’s so complete that the writers can just go in this world and just play. We’re focusing on June-slash-Offred as our way in, but there are endless amounts of stories that we can tell in this world. When I read the book I wanted more, so I do think that fans of the book will be very satisfied.”

If she’s gotten good at keeping secrets after starring on these highly addicting shows:
“It is not hard for me to keep a secret. I mean, I knew that I was about to die on Orange Is the New Black about a year before the rest of the world knew! Honestly, I’ve become so fiercely protective of the show, and I want the show to be as successful as possible, and I want people to see it the way that we want them to see it. Just in life, I hate spoilers so much, and like, the last thing I would ever do is want to tell someone what happened. People would be begging me to tell them what happened, and I would still not tell them. I think we’re creating something that should be seen in a certain way, and I don’t want to undercut anyone’s talents or journey or work that they’ve put into this. We’ve crafted this in a special way where you want [to see] these episodes like this, and I don’t want it to be spoiled.”

If she has plans to do any comedy:
“I just finished a movie called Vault. It is a heist movie based on the biggest heist in American history that happened in Rhode Island in 1975. It’s actually kind of ridiculous. It’s these 10…just idiots—these low-level, no smarts, speed, who just ended up pulling off stealing millions and millions of dollars from the mob. I play one of the girlfriends. Ultimately, it’s not a ha-ha funny movie, but there’s definitely some comedy in it.”

“I would love to continue working side by side with my wife until the end. I think that’s how our relationship started; we really know how to work well with each other in that way. Recently we were sitting in our backyard, and I was like, ‘I really want to make something. I really want to make something with you again soon.’ And she was like, ‘Well, we could write something.’ I think I bucked at that idea and was like, ‘Well, you’re the writer.’ It was sort of her giving me some encouragement that I can do that, too. So we’ll see! I don’t know! We’ll see.”