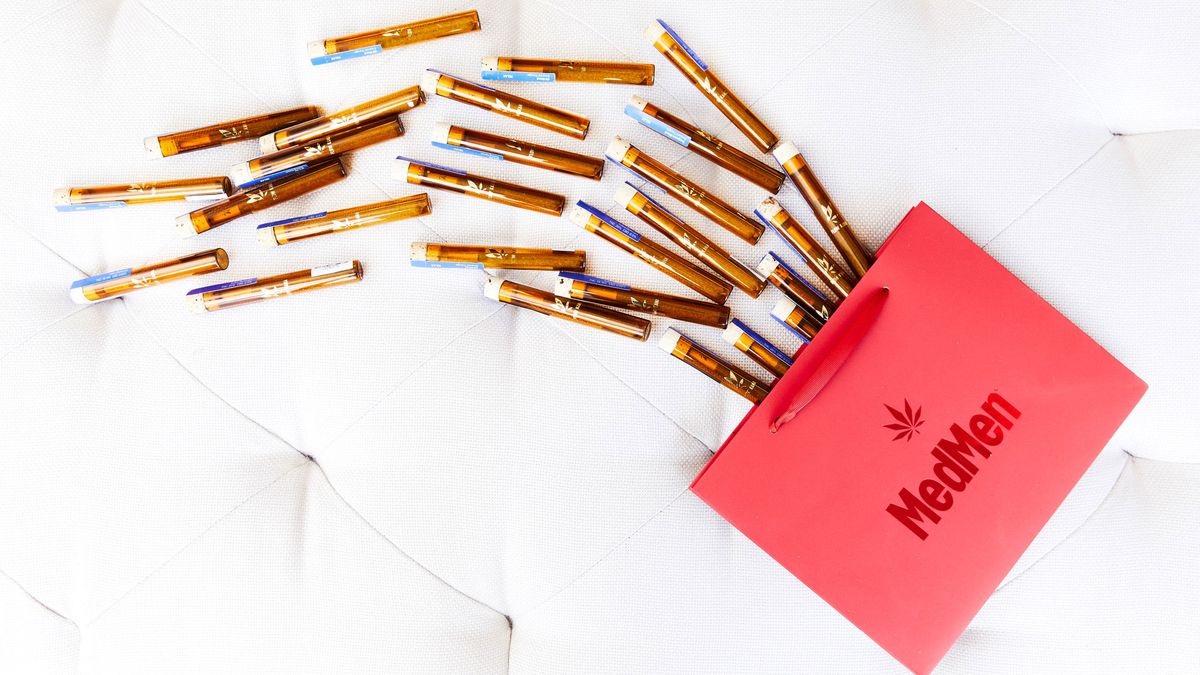 How MedMen Is Changing the Way We Think of Stoner Culture

L.A. got a whole lot greener this year, and we’re not talking juices. On January first, the state of California legalized marijuana, and at the forefront of its crystally herb and CBD-infused industry sits MedMen. The marijuana entreprise operating in California, Nevada, and New York has storefronts reminiscent of “an Apple store.” In addition to beautiful cases stocked with everything from edibles to CBD beverages to topicals, the co-founders of MedMen, Adam Bierman and Andrew Modlin, own and operate sustainable facilities where they grow their own strains of premium cannabis.

MedMen is also setting the bar high and paving the way for marijuana marketing. You can see their “It’s legal.” billboards along Sunset Boulevard—one of the steps they’ve taken to help consumers understand that marijuana isn’t just a stoner culture. After touring around MedMen’s Sun Valley growth facility and their West Hollywood retail store (two of the coolest places we’ve ever been), we chatted with BJ Carretta, the company’s CMO—aka the man behind the clever and bright red billboards—about MedMen’s success, how they’re staying ahead of the game, and what’s up next.

Noticing a gap in the market led to having almost 700 employees:

“Our two co-founders had a dispensary a bunch of years back called Treehouse that morphed into MedMen. They saw a gap in the space and built this to where it’s at now. Over the last three or four months, our growth has been massive. We’re almost up to 700 employees across corporate, retail, and obviously our manufacturing and cultivation facility. We are quickly becoming the largest cannabis company in the country.”

“There’s always hurdles around every state that comes into this—either medically or from a recreational perspective. We’re operating in California, New York, and Nevada—all three of those states have very different rules and regulations on how they operate and treat the cannabis industry. That’s a challenge, especially as you’re working to build a world-class organization, marketing team, and operational excellence.”

Marketing is where things can get a little tricky:

“My hat [is] marketing, and we’re writing the book on how to do it in California. It’s not like there were any set examples or case studies to go off of. There’s obviously laws—71.6 percent (I don’t know where the 0.6 came from) of the audience has to be 21 and up, and you can’t be 1,000 feet from a school, daycare, or a park. Then you hit the court of opinion at the end of the day—if we want to do this big wallscape, depending on who owns the wall, they can just say they aren’t taking cannabis. It happens all the time—it’s crazy to me. You’re limited on TV and radio because they’re controlled by the FTC, and then social is even more of a challenge—all those mediums are across the country, and you can’t really market the sale of a product in a state where it’s illegal.”

Their approach is clean and educational:

“You’re not going to see a lot of weed leaves or smoke on any of our materials—that’s not my strategy. It’s about de-stigmatizing and making it relatable to the everyday consumer. You’ll see on our ads we’ve got age ranges from 21 to 80. We have a grandmother who uses cannabis for pain relief, younger 30-somethings to relieve stress—it’s more widespread than people want to talk about. We’re trying to open up the conversation and narrative.”

Sun Valley facility (pictured above) is one of their smaller ones:

“[Our grow facility] in Sun Valley is small. We just opened [another] outside of Reno—in Mustang, Nevada, that’s 45,000 square feet. It’s a full-fledged manufacturing, cultivation, and production facility. We’re really proud of that. The Sun Valley facility is capable of producing up to 140 pounds of premium cannabis per month—actual production varies depending on what strains we are focusing on for the crop cycle. The facility is used primarily as a research and development site to test different cultivation techniques and technology, such as LED lights. The facility uses state-of-the-art controlled environment and the latest in LED technology, which decrease energy consumption. The closed-loop irrigation system lowers water use by recycling all runoff. We have approximately six strains growing at one time and 11 employees [working].”

You can’t help but be drawn to their clean and open stores:

“The aesthetic of the store is very open, inviting, and modern. There’s iPads stuck to the tables—you click into each product, and it gives you the production descriptions and the pricing. About 80 percent of people who come into our stores have never been in before. Our sales associates are trained just like any other retail associates—they help you navigate through. It’s not just your take-home experience; it’s also your in-store experience because we want you comfortable to come back in.”

And they carry everything from pet products to mints to beverages:

“We have everything from loose flour, which you buy in grams, to vape pens, edibles—gummies, mints, toffee, cookies, and all sorts of lovely stuff like that—topicals, pet products. Then we started carrying Kikoko, which is a tea—very high-end looking tea bags that have THC in them. [We also have] beverages; anything from kombucha to pure CBD water, to Sprig [soda]. The misconception with drinks is that you don’t actually drink the whole thing, you need to dosage just like you would any other edible because they can be fairly strong.”

They’ve made their mark on the East Coast:

“We have three locations in New York, with a fourth opening on 5th Avenue, probably in April. New York is very different because it’s very heavily regulated by the Department of Health. There’s 19.8 million people in the state of New York, but there’s only 40,000 medical patients. They’re totally different models. Us being there with medical facilities, everything is aboveboard as it should be. That’s all prep for what’s to come. We firmly believe that more states are going to come online for adult use in the near future. It will only help us in the long run if we’re there ahead of time and doing it the right way.”

Having political affairs teams helps to keep everything in check:

“We have an entire government and political affairs [team] and a compliance team that my group works with daily. They make sure we’re following all the regulations, and then the government affairs team—their job is to work with lobbyists, governors, senators, state reps, and city officials all the time. This is about doing it right. If the local officials are going to allow dispensaries in Santa Monica, how many are they going to allow? Maybe it’s just one. Could that be us because we invest relationships and we have the best model? I hope so.”

Great growth is in their future: