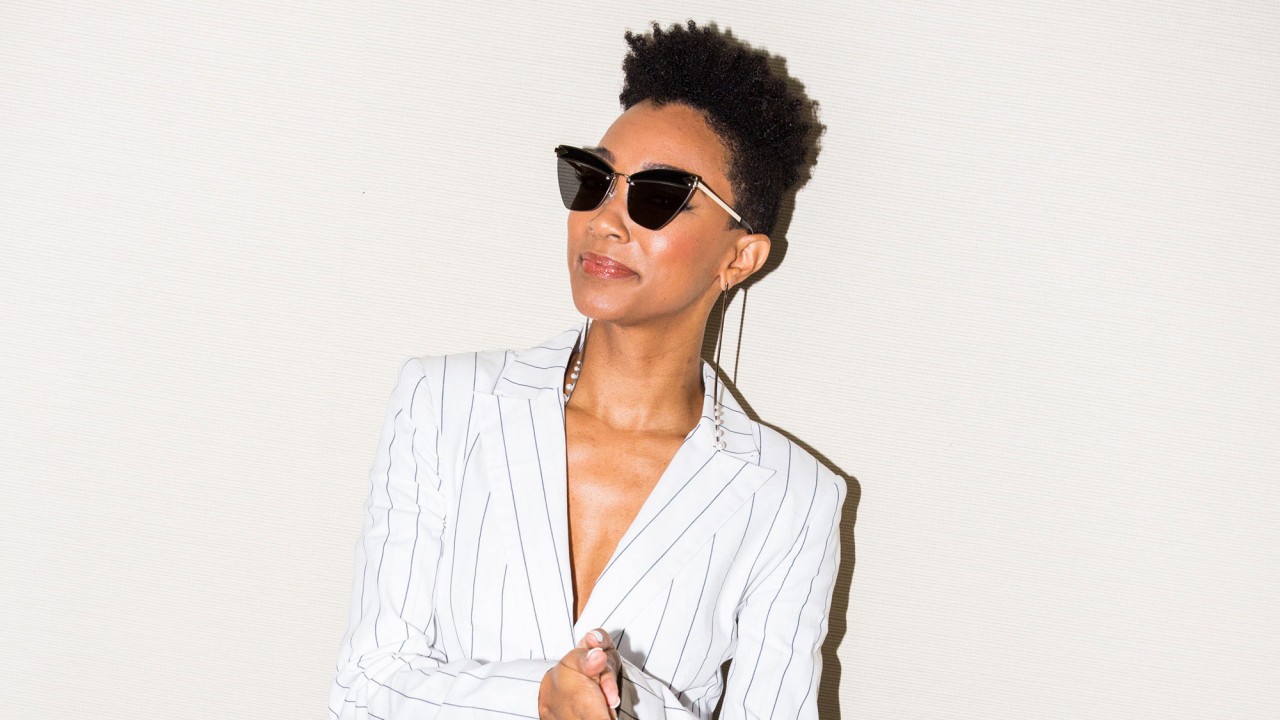 There's 1 Major Benefit to Cutting Off Your Hair

Star Trek: Discovery's Sonequa Martin-Green reveals the symbolic reason she made the cut.

New York Fashion Week is never not chaotic, what with all the rushing to shows, squeezing through crowds, and trying to make time to do....just about anything else. But when we arrive at Sonequa Martin-Green’s hotel room ahead of Dion Lee, she tells us she’s more excited than stressed—in part because it’s her first NYFW show ever.

Her newbie status is most definitely news to us, given that the actress has starred on hit TV shows for years—including The Walking Dead, Once Upon a Time, and currently, Star Trek: Discovery—and that her style is always on point. So we asked Martin-Green exactly what was going through her mind as she primped and prepped, whether she gravitated toward a signature style, and if she thinks the apocalypse could ever really happen (because how could we not?).

“I think every time you get dressed up, it's special because you’ve deemed whatever you’re getting ready for as worthy of the extra time you took to prepare.”

“I do portrait art, so I pay meticulous attention to the details of facial structure and love the art of makeup. I did my own look and rocked a blue lip for the Season 7 premiere of The Walking Dead. It was my first time experimenting with a non-traditional lip color on the red carpet, and it turned out great. I’ve had this wacky idea of rocking only one piece of makeup, like only lipstick or only mascara or just brows. I think that’d be fun.”

“I’m wearing my hair in a short, tapered cut now, and I couldn’t be happier with it! I decided to cut my long fro after the New Year. It symbolized cutting off old habits and old mistakes, and embracing a new, lighter, and more focused me.”

“I just love the creativity [of fashion week]. The creative expression. You can see the heart and soul that these designers pour into their work, and the energy is palpable because of it. I respect and appreciate any person who gives their all to share their gifts.”

“I’m absolutely in love with the structured shoulders and the flow of these pants. I love that the look is bold and angular, yet wearable and classily simplistic.”

“I tend to gravitate toward depth of color, structure, and angularity [when it comes to clothing]. I feel powerful in sharp lines and bold colors. But I do enjoy venturing outside of that into softer colors and more flowing forms.”

On her fashion icon: “I love Coco Chanel. Of course, the beauty of her style goes without saying; she was groundbreaking, unapologetically authentic. And she had a way of speaking to the soul of a woman that was full of wisdom, grace, and class.”

“When I was in high school, I wanted to be a psychologist. I auditioned to be in a play my 10th grade year, just for fun, and the revelation dawned on me like drops from heaven. It completely arrested me. ‘This is what you’re supposed to do with your life.’ I felt it so deeply in my heart. I remember the moment vividly. I’m beyond grateful for that ‘call,’ and I’m grateful that I listened.”

On primarily choosing roles in fantasy worlds: “I didn’t plan it, actually, it was the path I found myself on. But I appreciate the strong and heroic yet vulnerable characters I’ve been blessed to play in this genre. And I love the potential of quality storytelling in fantasy worlds, so I enjoy it, sure.”

A genre she would like to try for her next project: “A family or relationship drama based in the reality we know would be interesting.”

Whether she would go to space in real life: “I think it would depend on the method of travel, the specifics of the destination, and the duration of the trip. If I could get behind all of those particulars and feel secure, then I’d be down. Family’s gotta come with, though. Families who go to space together stay together!”

“I think the zombie apocalypse is an incredible metaphor for many things, including the death of cultural empathy, free thought, and enlightenment. So in that way, right now as we speak, we’ve gotta fight death to have life. In terms of it happening in real life, I think it could. The zombie apocalypse is just a backdrop—it could be the loss of electricity or a worldwide loss of water that could transform our state of living into a baser form of existence.”

What she would cheers to right now: “To #MeToo and Time’s Up!”