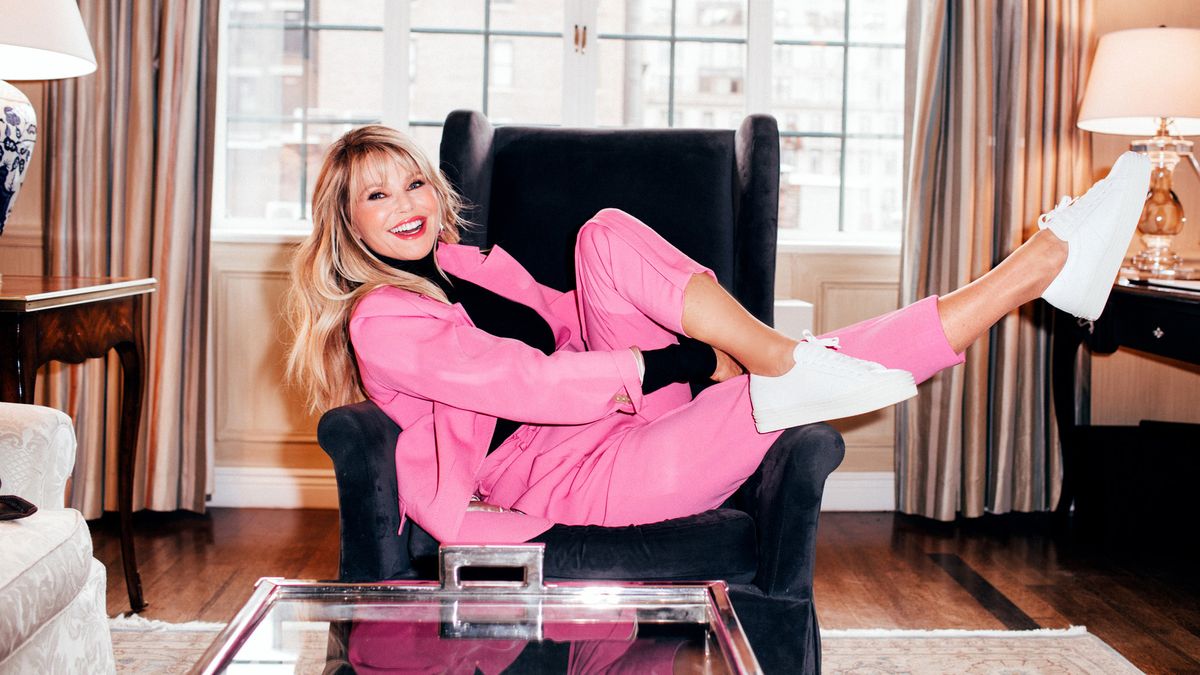 Christie Brinkley Wants You to Stop Being Polite to Inappropriate Men

Plus, the icon tells us why she decided to get injectables—and what happened immediately after she did.

Seated comfortably on an armchair, with her long legs curled to her chest, the icon known as Christie Brinkley sang to me for just a moment. “When I get older, losing my hair…” she half-hummed, sweetly, trailing off after the first few lines of The Beatles’ classic “When I’m Sixty-Four.” “I remember when that song came out,” she told me with a smile. “Thinking, ‘That’s ancient. Sixty-four? Oh my god!’ And now, that’s my next birthday.”

That’s right, people: Brinkley is about to turn 64—and it’s truly impossible to tell. For starters, she walked into our interview looking very “Gigi Hadid.” I couldn’t stop myself from complimenting her pink 3.1 Phillip Lim suit paired with a black turtleneck and white Saint Laurent kicks. She also had no trouble forming a variety of complex poses; balanced on a ledge, leg in the air... there’s no question this woman is a P-R-O, pro. But the most recent thing Christie has done to maintain her youthful glow? Experimenting with the injectable neurotoxin Xeomin, along with Ultherapy, an ultrasound that helps to lift the skin in the neck and chest area, both owned by the cosmetic company Merz, with which she recently partnered.

Of course, Christie feels no shame in sharing this information. In fact, she views it more as a tip, not a secret. With a quick cheers to that (sadly, with water, rather than her brand of prosecco, Bellissima), we began talking about why she decided to take this next step, the funny experience she had after getting injected, and some other things women should never be ashamed of.

Why did you decide to get injectables?

“While [toxins have] been around for a long time, this is the newest one, and I like that it is pure–with nothing added. That’s what interested me. [And] nowadays, they know where they’re putting it. They put it in the frown lines... It eases off the expression, and let’s face it—with what’s going on in the world today, who doesn’t need their expression eased off a little bit? I was like, ‘All right, this has been a pretty trying time. I’ll give it a go.’ And I don’t look nearly as worried as I am [laughs].”

“At this point, women owe it to themselves and each other to not feel like it’s shameful to take good care of yourself or to want to dabble in some of these things that are offered. In my mom’s day, it used to be about hair color, like ‘Does she? Or doesn’t she? Only her hairdresser knows for sure!’ Twenty years ago, I think it was kind of that way where people would sneak off to the dermatologist to get a little lunch time dabble. They felt like they needed to sneak in the back door and sneak out. That’s just so...silly. I feel like now, when there are things that are safe, where the benefits make you feel better, why not? And why shouldn’t we tell each other? Why shouldn’t we share when something works and makes you feel good about it? We’re doing each other a disservice when we use these terms like, ‘She admits to... She finally reveals...’ Even the term ‘beauty secret.’ It’s not a secret. There are things that you can do that make you feel and look better. You shouldn’t be ashamed to try it for yourself.”

I feel like there’s a lot of judgment around the word “injectables”:

“Let’s face it—needles are scary. I’m very needle-phobic. But it’s so fast. For me, the only big deal about the injectables was that for four hours, you’re supposed to not bend your head down lower than your waist. So what do I do? I get the injectables, and it was like, ‘That’s it?’ ‘Yup that’s it.’ It’s like, ‘Wow, OK, that didn’t hurt. That’s not bad.’ Then they said, ‘OK, don’t put makeup on it. Just keep your head up for four hours.’ So I thought, ‘Four hours. What do I do?’ First thing I did was go to the ladies’ room, and I put my purse on the counter, and it fell off the sink and onto the floor. My makeup bag scattered, and I almost bent over to pick everything up! [laughs] And I went, ‘Oh, no. I almost did that!’ Then, I opened up the bathroom door, and I was waiting for a person to go by, and I was like, ‘Excuse me! Could you help me in here?’ And they’re like, ‘Uh, you need help in the bathroom?’ [I said] ‘Yeah...um. I just had an injectable in my brow, and I can’t bend over. Can you help me? I knocked my purse on the floor.’ I felt like modern-day Lucille Ball or something [laughs]. Then I’m like, ‘All right, well, I still have some time...’ I called up my daughter, Sailor [Brinkley Cook]. I said, ‘Do you want to go to a movie?’ And she goes, ‘Yeah! Let’s go! I really want to see Charlize Theron’s movie. She’s a spy.’ The opening scene in the movie had one of those moments where you go [gasps], and I whack myself in the face to cover my eyes [laughs]. I thought, ‘No! What have I done?’ But even that didn’t do anything. It came out fine. [When the muscle freeze kicked in] I really didn’t feel claustrophobic, or like I’d lost my ability to express myself. I just felt like, ‘Oh, you know what? Actually my forehead just looks smoother, but I can move it. I can do all of those expressions.’”

What are some other things that you think women are ashamed about when they shouldn’t be?

“You don’t need to smile at a guy who’s being inappropriate. I think in today’s climate, we’re seeing a lot of that. I see there’s a meme going around that says, ‘You don’t have to keep smiling at that guy when he crosses the line.’ I think a lot of us are guilty of doing that because we’re trained to be polite. Girls are always trained to be so polite. I was very aware of that with my daughter Sailor. With Alexa, I may have tried to get her to be more polite because I was younger and all of that. With Sailor, I kind of pushed that ‘speak truth to power’ button mode. Like, ‘You go and question, and be a strong girl.’ So there’s definitely that.”