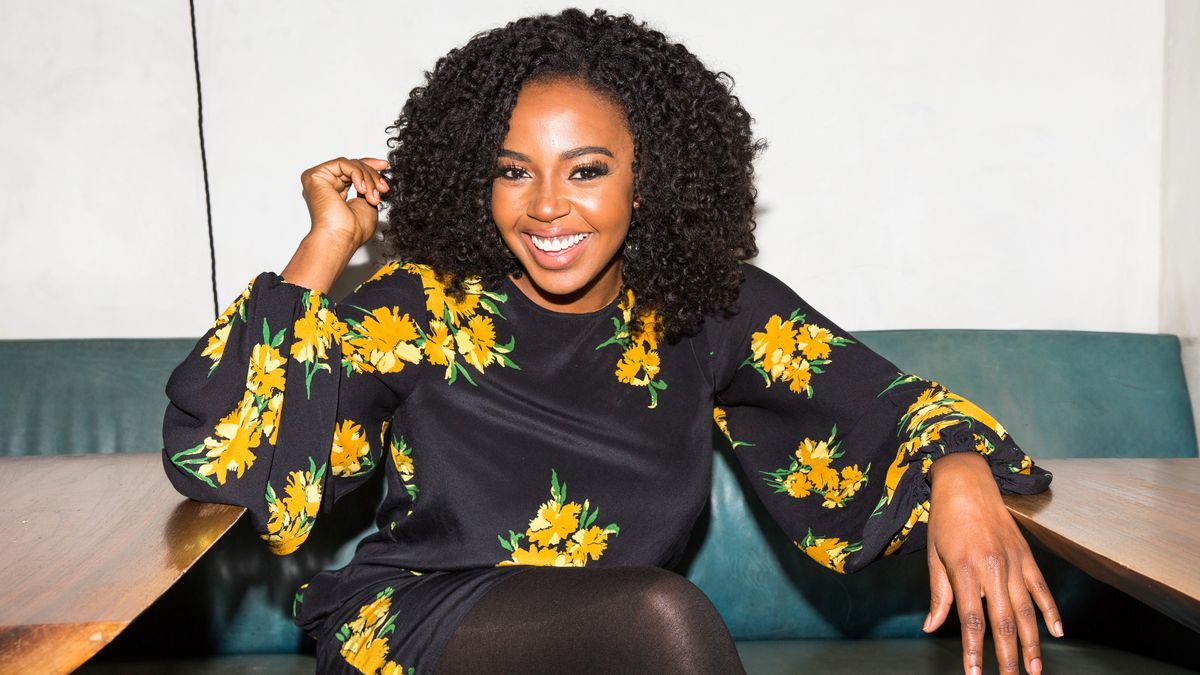 The actress opens up about her departure from the show, while telling us about her new one, Here and Now.

I had so many questions after watching the trailer for HBO’s new Alan Ball series, Here and Now, that I could barely form them into words. Was this a show about family and adoption? How does the supernatural aspect come into play? And, despite the fact that it seems pretty tame, is it scary at all? (It *is* from the same creator as True Blood, which had some jumpy moments.) But Jerrika Hinton couldn’t reveal too much. The actress, who plays one of the daughters, Ashley Collins, didn’t want to spoil things for everyone. “I’m not even sure if I have enough of my own words to describe it, yet,” she told me. “Just the excitement of seeing everything we’ve put together, and the choices that they made to draw people in, I always find that kind of stuff really interesting.”

Of course, her answers only added more mystery and intrigue—all the more reason to tune in on Sunday nights at 9pm EST.

But despite the fact that Hinton was pretty mum on what we can expect from her on screen, she did talk about her life off-screen, following our photoshoot at The Musket Room. We covered everything from her love of climbing (trees, rocks, and onto ledges for photos) to her plans to get back into writing—something she studied in college. Jerrika also opened up about her departure from the Shonda Rhimes hit Grey’s Anatomy last year and why she was shocked to see an outpouring of love after a beyond rough start on the show.

I have to ask—is Here and Now scary at all?

“For the viewer, no, I don’t think it’s scary in that way. Calling it mysterious feels right. I don’t think it’s a mystery that leads to terror, though. It’s one that leads to intrigue and, hopefully, compassion. As far as if it’s scary to be working on a new show? It is. We talk about that sometimes in our group text. We’ve all cared for this project for six months or so, and we’re all so proud and invested. Now it’s released to the world and everyone gets to engage with it. You’re giving birth to a piece of work, and you hope it’s well received; you hope your baby gets to grow up.”

I know there’s a mysterious supernatural element, but how much does it revolve around the adoption story?

“How we came to be a family is a quintessential element of what the show is about. In the teaser trailer, Tim Robbins’ character, Greg, had his great line, ‘Family is a great experiment.’ That’s kind of the central thesis of the show, as far as I’m concerned. What does it mean to be a family? What are those things that bring you together? And what defines those odds and what defies those odds? I think all of that is part of the blood of what the show is.”

Some people were really upset when you left Grey’s Anatomy. Were you surprised at the reaction?

“I was surprised. My first few years on the show were difficult in terms of interacting with the audience. There were some really nasty responses, particularly when they made my character a love interest. There was a lot of hate speech, frankly, directed at me—just lot of just nasty responses that I didn’t anticipate would come with just being a character on a show. It was shocking, and lonely, and painful. To then, come through those five seasons on the other side and find this outpouring of love, that was a surprise. When I left, I made two Instagram posts—one for the general fans of the show and general fans of Shondaland, and a separate post specifically for the ones that look like me. I’ve always known the importance of my being on that show and my face being on TV; I’ve always known what that means for people who look like me. That support has always been there and has always been vocal. It was the other side of it, also all of a sudden showing such love, that was a surprise.”

Is it difficult putting yourself out there, with social media and all?

“Being a decent person is easy, I think. And operating with dignity is easy. But responding to other people’s indecency—not even responding to, but fielding how other people choose to be in the world—can be a challenge sometimes.”

During our shoot, you spoke about your love of climbing things. What’s the story behind that?

“I think the simplest way to put it is I’m a free spirit and when something calls to me, I go, ‘Ok, yes!’ I like to go out to the desert often because it’s where I find clarity. Every time I go out there, it’s like, ‘Ooh! Look at pile of boulders! Let’s go climb it!’ I had another photoshoot where the photographer had a balcony with this beautiful tree. And I was just like, ‘You’re going to tell me no, but I’ve got to do it. I’ve got to climb the tree.’ Everyone was like, ‘Please, stop! No!’ And I was like, ‘I hear you, and I will say they warned me that this is dangerous. But I’ve got to climb this tree!’ I’ve done it since I was a kid.”

What else do you have going on?

“I’m planning to travel, and that’s something I’m deeply looking forward to. I’m also planning on getting back into photography. There are stories to be told through that, possibly in conjunction with traveling, or possibly just around the streets of Los Angeles. I’ve also started writing again. I studied playwriting in college and it’s kind of a parallel love alongside acting. In the past few years, I’ve gotten to dip my toes back into it, whether it’s giving commencement speeches or going to Freya Project events [and telling] original stories. But I have the time now to really immerse myself in all of that and I’m really looking forward to building that backdrop again.”