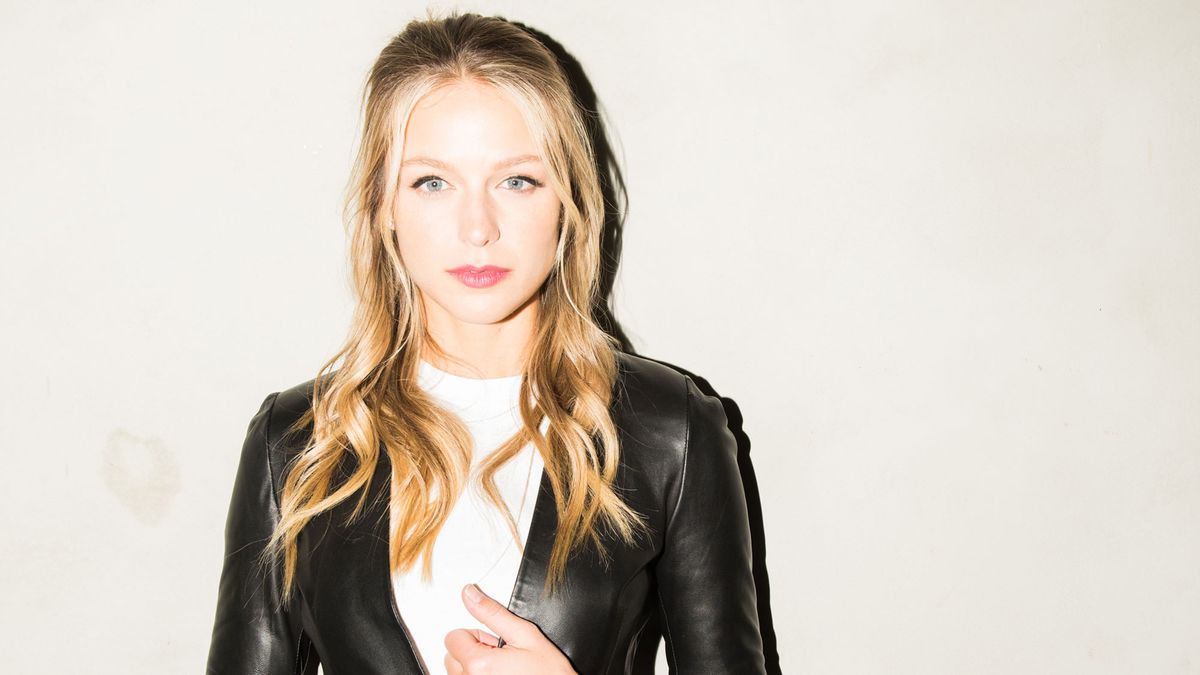 We spoke with the actress about her mini-series Waco, crossword puzzles, and connecting to dogs.

So, a superhero walks into a bar. It sounds like the beginning of a way-too-corny joke that’s only mildly funny at the end, but in this case, it’s how we met Supergirl’s Melissa Benoist. Just replace the word “bar” with Toro NYC. And make the punch line something about the fact that, as we waited for everyone else to arrive, the actress treated herself to that day’s crossword puzzle, all while looking—literally!—powerful in a kick-ass all-black leather suit.

Still, it isn’t exactly fair to *only* reference Benoist’s role on the CW hit (even if she did arrive looking quite superhero-ish). She has plenty of other big credits under her belt as well, including Glee from back in the day and, most recently, the Paramount Network’s mini-series, Waco, which airs on Wednesday nights and tells the story of the ’90s siege involving a religious cult. We spoke with Melissa on why she was initially intrigued by the role, her open struggle with anxiety, and her real-life superpower (which might actually top any we’ve seen on TV).

Can you tell me about your new mini-series, Waco?

“I was five years old and remember [this siege] being on the news. It was 51 days between the ATF, [The Bureau of Alcohol, Tobacco, Firearms and Explosives], the FBI, and the Branch Davidians, who people labeled as a religious cult. Their leader, David Koresh, was this manipulative, charismatic, megalomaniac man who reinterpreted the Book of Revelation—which is like, end times, fire and brimstone, really light reading material. I play his first wife, who he married when she was 14. He said God told him he had to marry her, and he picked her out from the church, and they left in the middle of the night. She was the first of, maybe, 12 wives? What ultimately happened [with the siege]—because the Branch Davidians had firearms—was, the building that they were all in burned down and 79 people died, including over 20 kids that were under the age of 15. It was a massive tragedy that no one really knew about back in the ’90s, because the media portrayed it as one thing, and the FBI and the government—there’s just a lot that no one has known the truth about. So I hope this project will get people to see that there’s always more than meets the eye, compassion is really important, and nothing is black-and-white.”

What made you want to sign onto this project?

“Initially, I was drawn to the word ‘cult,’ because I’ve always been really fascinated—I think we all are. We all imagine how you can get wrapped into something that seems so extreme, you know? I’ve watched every Scientology documentary, and I watched Fundamental Latter-Day Saints, and I’m always really interested in those outliers of society. Then, in one of the first meetings I had to play Rachel [Koresh], I saw a picture of her and couldn’t look away. She was just so strong and stoic, and imagining what this woman went through was really what made me want to tell her story.”

And then there’s Supergirl! When it comes to everyday decisions, do you sometimes think back to your character and what she would do?

“Not necessarily, because I think she lives by a moral code and ideals that are unattainable. She’s such an optimist, and I just can’t be that all the time. But a lot of the strength it takes to play that part seeps into my daily life, in ways I don’t even realize. I wasn’t meek before the job, but certainly non-confrontational, and that has broken apart and disappeared. I also feel like this job has really pushed me to stand up for myself in ways that I never would have had the bravery to do before.”

You’ve been pretty open about your anxiety and mental illness in general. How do you find the balance with that, being a public figure?

“That is something I still don’t know how to deal with yet, because I’m introverted in a really extroverted position. The anxiety is there on days like today, when I’m running around and doing press, talking as Melissa and not as a character. The words fail me sometimes, and I kind of retreat back into my shell, and that constriction in your chest is always there. But it’s good to be a little afraid and push yourself out of your comfort zone. That being said, being in that public position where people are looking at you, you do have to be courageous and brave to put yourself out there like that—unless you’re the kind of person that loves it. And I know people like that, too.”

Are you a homebody, too?

“I’m such a hermit. My dream day would be to wake up leisurely, do a crossword puzzle with my coffee, make a green juice or a smoothie, and stay in the house all day. There have been days where I’ve Postmated every single thing I needed, including controllers for a Nintendo Switch I had just gotten. So my Postmates person had to go to GameStop and buy me a Nintendo Switch controller, because I just could not be bothered to get off the couch.”

What is your real-life superpower?

“I don’t know if I’m that great at anything. [laughs] I guess I’m really good at Mario Kart. But that’s not a superpower. I read fast? I could be... I’m a dog whisperer. Dogs like me a lot. Maybe not all dogs, but every dog that I’ve had the pleasure of getting to know a little bit better than just petting them on the street.”