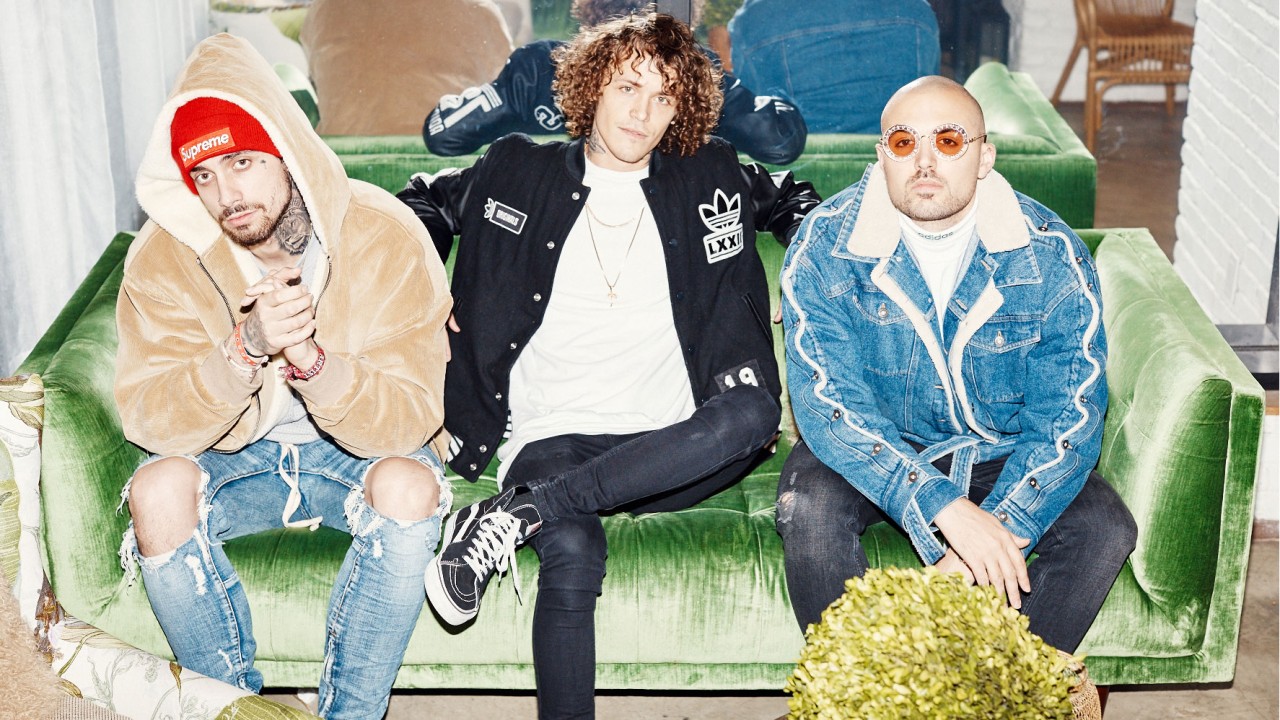 Why These DJs Brought $1K in Cash to Their Coveteur Shoot

We talked fashion, music, and dollar bills with Cheat Codes.

We like to go to bed early as often as possible (under-eye bags and incessant yawning aren’t a good look at the workplace), so we tend to get our late-night talk show fix the morning after while getting dressed, or during a weekend Apple TV binge. Last night, however, we made an exception. Cheat Codes performed on Jimmy Kimmel Live! and, having recently met—and quickly bonded with—the L.A.-based trio, we needed to stay up and watch our boys.

Comprised of Trevor Dahl, Kevin “Kevi” Ford, and Matthew Russell, the group was born from Ford and Russell’s shared misfortune. “Me and Matt became really close because we ended up suing this [producer] together that stole money from us,” Ford told us when we visited Cheat Codes at their NYC hotel before their recent set at Lavo. “We sued him together, became best friends, and were like, ‘Dude, screw everything, let’s just become full-time musicians and do DJ music and live it up.’ At that time, Trevor had just moved into Matt’s house, and we made a couple songs together.”

Among those songs were “Visions,” “Adventure,” and “Sex”—the latter of which garnered half a billion (with a “b”) streams on Spotify. Then came “No Promises,” their collab with Demi Lovato that you were probably singing and drunkenly dancing to all summer ’17. We can confirm that getting ready with them is just as fun and upbeat as their music—complete with distressed denim, classic sneakers, and a bit of sentimental bling.

“I only use conditioner because my hair is very frizzy. I fried it with too much bleach. I can’t remember the name of it, but it’s my girlfriend’s conditioner. I use that, and I use pomade sometimes. And I usually have braids. When I braid it, I put the pomade in it, do a bunch of braids, and then use hair spray.” —Kevin Ford

“Rosie is my dog. A little long-haired chihuahua. [I’ve had her] coming up on five years now. She’s my best friend. I love her.” —K.F.

“We play in New York all the time, but the venue we’re playing at tonight is the very first venue we played in New York, Lavo. It was like, three years ago, and we literally got kicked off because we weren’t playing the right music. It was bad. When we started we came from songwriting and producing; we didn’t really know how to DJ, so we kind of went in playing a lot of original music. Nobody knew the music, so people were like, ‘Yo, I wanna hear Ty Dolla $ign!’ So along the way we blended our original music with club music in a way that feels great for everybody. It’s been a good ride, a good journey.” —Matthew Russell

“Trevor’s roommate gave me one of these [bracelets]—it’s an abundance bracelet—and my grandma gave me one.” —M.R.

“I usually shave my head before the show, make it clean. I usually cut it once or twice a week.” —M.R.

“I like necklaces a lot, and I buy a lot of different pendants that go with [them] and switch out necklaces all the time. This is just kind of showing love to California, which is where we live and where we started. I got it online. The internet nowadays, huh?” —T.D.

“Right now [my outfit] is pretty basic. I woke up late today. I partied with some friends last night, and I woke up last-minute and I realized we had a really early flight. I was still a little tipsy, so I just put some stuff in a bag, and here I am. I got some black-and-white Vans, some classics, you can’t go wrong, some Topman jeans, I love these jeans—they fit better than any other jeans I have. And an Adidas jacket. Nothing too crazy right now.” —T.D.

“We don’t coordinate at all. Our styles are different, but I feel like they fit in their own little way. They make sense together.” —T.D.

“[Before a show] we usually try to smoke some weed, chill, go out and get some dinner, have a good talk, and then have a couple drinks. We usually drink Don Julio 1942, that’s our go-to. And then we get really drunk and we party. It’s fun.” —K.F.