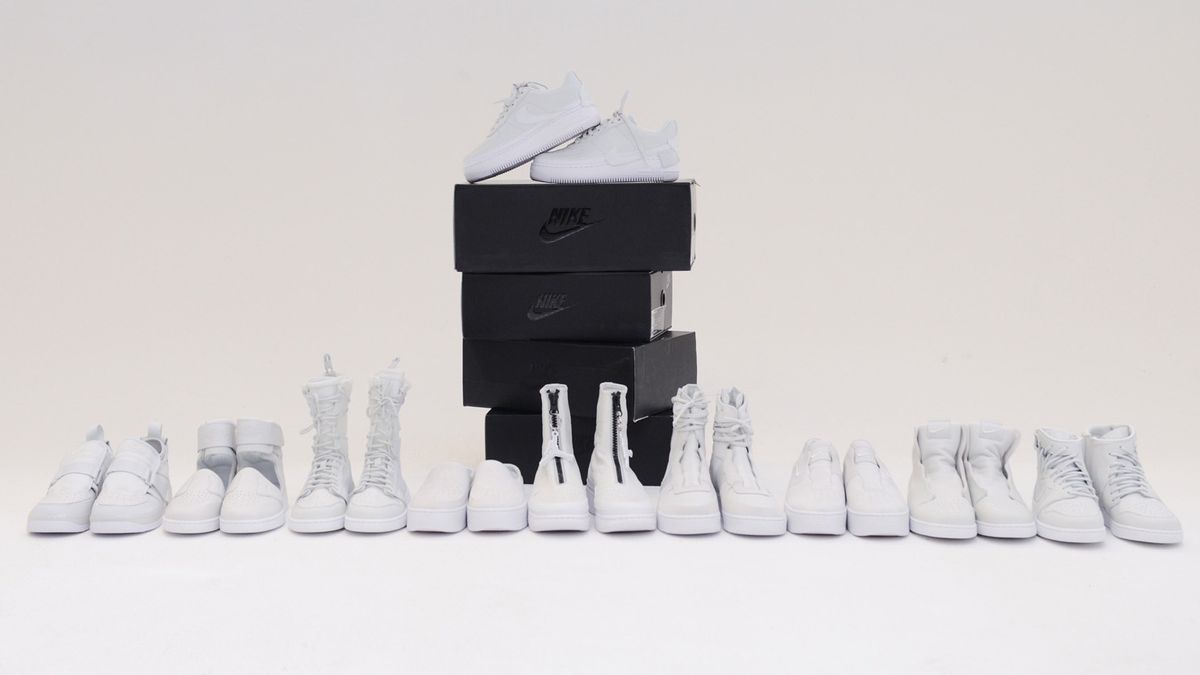 Forget Stan Smiths or Converse—2018 is all about the 1 Reimagined.

In the discolored film photos of my dad’s youth growing up in New York City, there are black Converse (or, as he calls them, “Chucks”) and Nike Cortez sneakers everywhere—on steps and streets and parking lots, on the feet of stoop kids, tangled and hanging from telephone lines.

The first time I chose to wear sneakers was in middle school, when I refused to hold a bouquet across my heart for a school photo and insisted girls could cross their arms just like the boys. It felt like this tiny act of defiance, wearing shoes I saw my dad wear, posing like all the boys did. And it’s so weird to think about that now, at a time where everyone in the front row of fashion shows has white Adidas on or an “ugly” (but beloved) pair by Acne or Balenciaga. But this shift of women wearing sneakers more often—and not just to work out, but fashionably—is recent.

The Air Jordan was created for (obviously) Michael Jordan; the original pair was produced exclusively for him in early 1984. The Air Force 1 was created for basketball players in 1982 (they were professionally all men—the WNBA wasn’t founded until 1996).

Late icon and fashion photographer Bill Cunningham was pretty much right about everything, but in a 2014 On The Street titled “On the Right Foot,” he was wrong when he wrote, “Elaborately decorated sneakers are playing a starring role. A trend not unlike the highly embellished women’s handbags at the turn of the century, it is definitely a men’s thing, although women are showing variations.” He couldn’t have seen it coming, based on history, but sneakers are definitely a women’s thing now, too—and Nike wants to make sure that idea sticks.

The 1 Reimagined is a new collection featuring five new pairs of Air Force 1s and Jordans designed by a team of fourteen female designers. Their goal was to redefine the two most iconic sneakers that Nike has ever made through a woman’s lens. It’s the first time either of these shoes has had anything major done to their design since the ’80s, and the absolute first time they’ve been designed with women in mind specifically.

Thankfully, the collection isn’t ultra feminine, and there are no colors (no millennial pink in sight). The shoes are sleek and impossibly cool with details like corset lacing, layers of translucent material, and a playful take on the swoosh—it has been removed, double-stacked, twisted, and reversed. It’s also inclusive in that it’s all unisex, so everyone can wear whichever one they like.

After hearing about the personality types that inspired the names and personalities of the designs, I spoke with Georgina James, the senior creative director for Nike Women’s Footwear, and Marie Crow, the material design director for NSW footwear, to discuss what makes the five pairs different from any other Nike sneaker you’ve ever seen before.

Georgina James: “You can see that the two uppers are very simple in design, and I have taken those iconic lines that we have in our DNA of the two models, and we’ve paired everything else back from the branding on the side. We’ve taken the Swoosh off here, and we’ve just embroidered the Win logo. Here again we’ve taken the oversized Swoosh, and for me, it’s just a small embroidery, so everything is very subtle, but it’s all attention to detail. Then for the Air Force 1, we gave it a new shape, so we’ve got an almond-toe large shape, slightly elongated pointed toe, and then we’ve given the tooling a 12 and more height.”

Marie Crow: “We decided to very much take the material inspiration from the Sage across the entire collection. We’ve got the off-white color, and there’s a palette of nubuck full-grain leather with what we call sort of OG sports-mesh. Each shoe has a hint of something that really gives it its personality. On the Sage, we really dialed up the details and made those nice tactile, raised embroidered touch points.”

GJ: “We removed the laces so it’s kind of as fast-forward as it could be, and I think it looks like a simple exercise, but actually removing laces and having a stiff one is a challenge for fit, so we worked a lot with these guys on fit and having them easy to get on. But they’re not going to fall off when you walk!”

GJ: “You’re going to brunch on a Sunday. You’re going to look super cute and easy—this kind of element of ease we talked about with the Lover. We created the mule on the same tooling as the Sage for the Air Force. Really simple design lines.”

MC: “The Lover is very much about kind of sensual, tactile, desirable... You just want to put [your] foot in it.”

MC: “We really wanted, from the start, to explore velour linings for both the AJ 1 and Air 1, so you get that unexpected softness against the foot, and then these really nice compression-molded sock liners, which take the patterns from the outsole inside. My favorite detail for materials was bringing this flash of metallic underneath the perforations! It’s very iconic to the Air Force, and it just gives a cheeky kind of surprise and delight detail there.”

GJ: “I think we wanted the DNA of the two icons to shine through [in] everything we did. You don’t want to push so far that you’re like, ‘Where’s that come from?’ I think that was really important. Off-center and humorous [were] the two words that we kind of use to keep checking back on ourselves. It’s a good way to push the boundaries and get to have some fun. This is working off of a style that we’ve got in line called the Up Step, with the slightly high tooling, and it’s made out of foam, so it’s very comfortable construction-wise. And then we’ve added this kind of double round to give it the illusion of this extra height. I think the most fun thing about this shoe is the whimsical kind of branding execution, and the medial and the lateral are different, and the left and the right will be different as well. We’ve embossed the details into the upper here, oversized Jumpman, and the tooling that we played with.”

GJ: “This was about this idea of being utilitarian, but we wanted to have a kind of feminine approach to being utilitarian, and our material designers did this kind of layering approach. We elevated the height on the Jordan, and we’ve got this Swoosh detail on the back, so you can wear it how you want to wear it. An element of surprise like this Swoosh is under the layering, and the Jordan wings are under the layering. This is one of my favorites!

“And then the Air Force took the iconic tongue, put it onto the outside. The translucency here comes through on the tooling. I just kind of gave it a tough mixture of feminine and tough look. You can’t see it in this late, but under here the construction shows off those reflective material underneath those kind of panels.”

GJ: “The last one we designed was the Rebel—so we broke the rules! One of the most iconic things about the Air Force is the lacing, I think, so we took it from the front and flipped it to the back. Even like details down to the deubré on the heel. On [the] top label, we have the tongue made out of the OG material—we wanted the consumer to wear this how they want to wear it, so the lace could be tied at the back or wrapped around and tied at the front. They have customization.”

MC: “Here there’s a nod to that OG block and them exploring this kind of different joining technique with these almost hand-looking stitches to assess the craft.”

GJ: “We had the word ‘reconstruct.’ I believe for the level, we like the idea of kind of taking the DNA, pulling it apart, and putting it back together again. Turning on its head—that’s a great way of putting it! That’s basically what we did with this. We took the upper sole familiar to everyone and twisted it around the foot, which I think is going to be really flattering on a person’s foot. And then make sure that those are easy to get on and off for the sake of the sizes.”

The 1 Reimagined will be available to buy starting on February 7th.

5 Personality Types Will Now Determine Your Next Shoe Purchase—Which One Are You?
Virgil Abloh and Nike Finally Confirm They’ve Been Collaborating
All the Crazy Nike Collabs Happening Right Now as You’ve Never Seen Them