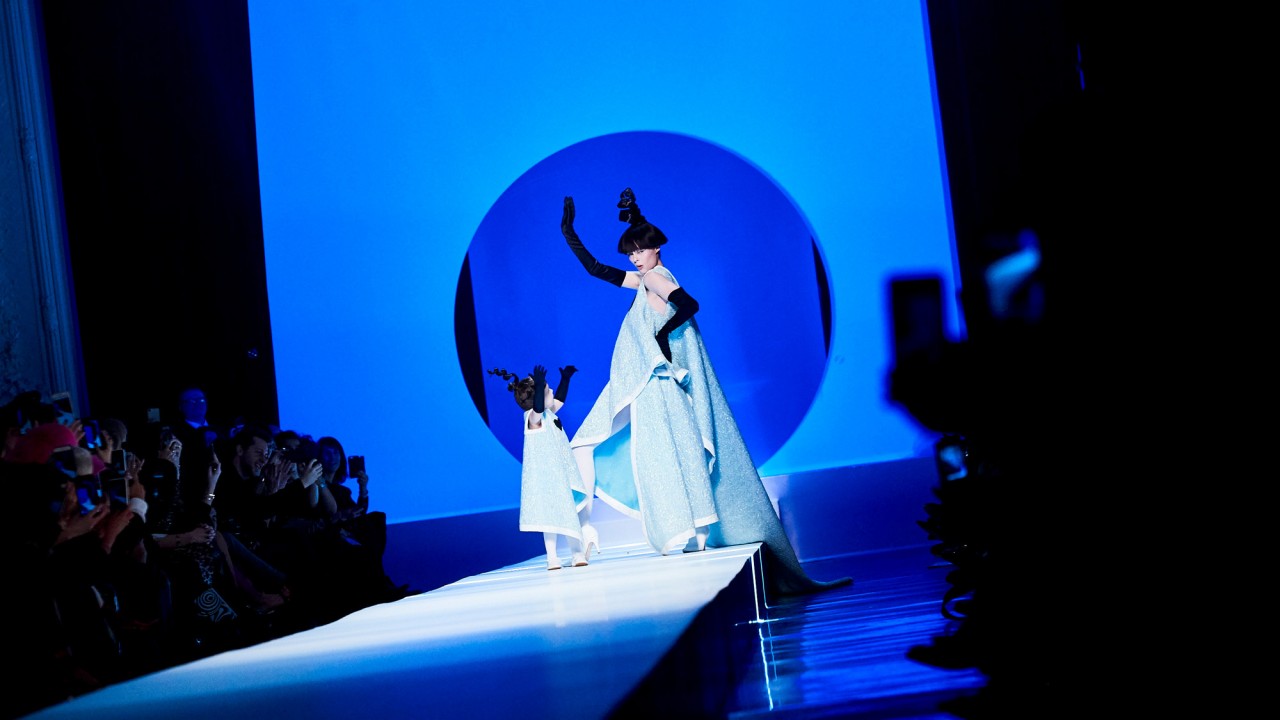 This is officially the era of supermodel-spawn.

Whoever said models don’t have personalities has never met the crew that walked down the Jean Paul Gaultier runway. This diverse group of women had a virtual walk-off while modeling the ’60s-inspired couture collection. Guests, including Pierre Cardin and Nicolas Ghesquière, whooped and clapped as models tried to out-pose each other.

For his spring 2018 collection, Mr. Gaultier paid homage to iconic designer Pierre Cardin, whose own work came to define the Swinging Sixties. Mr. Gaultier’s first job in fashion was as Cardin’s studio assistant.

“I did the collection as an homage to Pierre Cardin. I tried to show the freedom he has in his creations,” the designer said of his collection. “In some ways, I’m going back to my roots.

References to Op Art opened the show with monochrome tunics and suits with contrasting fins. Tailoring, of course, took center stage. Trench coats were re-worked with a Judy Jetson-esque twist, while dresses ranged long and fluid to one that looked like a piece of ribbon wrapped around the model’s body. Day Glo dresses and suits were paired with matching wigs, and prints were wild and bold.

Coco Rochas, who is a veteran of the Gaultier runway, modeled one of the final looks with her daughter, Ioni, in matching ice blue dresses. The adorable two-year-old copied her mother’s poses as they walked down the catwalk hand in hand.

Check out the slideshow below to see more from the runway show and what the designer said about his collection after the show:

“Pierre Cardin is my beginning. Why not come back to that funny period—the ’60s. It’s not nostalgic, but to do it in a modern way, not the way it was,” the designer said of his collection.

“When I worked with him, I started at the age of 18. He saw my sketches I sent him because I was too shy to see him, and he took me on the day of my birthday, which I think is symbolic,” the designer said.

“I was very frightened when he [Cardin] arrived today. What would he tell me? I was like a little student of fashion, which I never was, because I thought the best way was to work with somebody like him, which I was very lucky.”

“The chignon is worn more like a hat,” he said of the hair.

“I think there’s not only one beauty, but many different kinds of beauty, and I want to show that each time.”

“The hair and makeup are completely inspired by that time. At that time, the cut was very Vidal Sasoon, so I did the bowl cut like the pictures and made it in a modern way.”

“Another inspiration was when you peel an orange and the peel unravels.”

“A lot of things that look like fabric, in reality, was embroidered.”

“There’s lots of accessories—lots of jewelry that look like springs. You can see it also in the boots.”