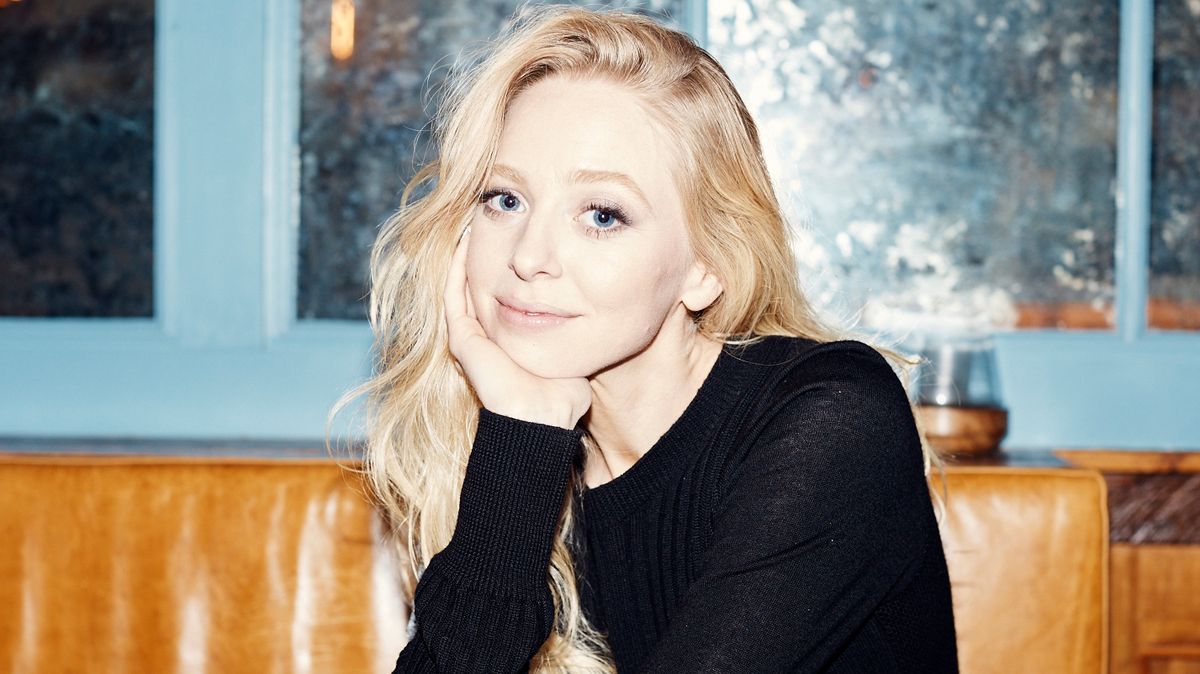 Why Mr. Robot Should Be Our Next Binge Watch, According to Portia Doubleday

If you're not caught up, the actress says it's worth watching in one sitting—while hinting toward a CRAZY season 3 finale.

When you’re interviewing someone who stars on a show about hacking, it seems a bit weird to be given their direct number. Shouldn’t they be overly concerned about security? I wondered while dialing. But once I heard Portia Doubleday’s voice on the other end of the call—not long after our shoot at NYC’s Italienne, and while she was riding in the car with her family in Nashville—she seemed surprisingly relaxed. Perhaps it was the holiday spirit (the actress tells me she and her family take Christmas very seriously), or that she was excited to talk about her job, aka playing Angela Moss on Mr. Robot.

Between singing praises of the show’s creator, Sam Esmail (which she asks me to edit down, because she gushes about him in every interview), and the occasional background question (there was some confusion about how to turn off her sister’s car), Doubleday spilled on her character’s transformation, finding out spoilers, and what the reaction to the season finale will be.

For people who haven’t yet seen Mr. Robot, is this a good one to binge?

“Definitely. Especially before the election. I feel like it kind of predicts a lot in the hacking world. They joke about how Sam Esmail has made some predictions—just how the Sony hacks happened right after we had shot the pilot. There’s a lot that goes on, so it’s nice to get into it in one sitting. Especially this season, there’s a lot of drama going on.”

In the past few seasons, you character has undergone a huge transformation. What has that been like?

“It’s been kind of incredible to play someone that is so complex and layered, and to constantly see her transitioning through this story. Each season is kind of a different aspect of this character that I’m able to experience and prepare for. The preparation is the most fun to me—just kind of exploring who this person is. I love the flashback this season of Angela with her mother. It keeps me on my toes; it’s exhilarating. I love being a part of this show. Already, I’m years [into] developing this person. This season, she’s growing in these weird places that I never really anticipated and it has been just the coolest artistic ride.”

In every post, I keep seeing the word “power” associated with Angela. Do you feel like that’s an accurate descriptor?

“Definitely. It’s the environment that she’s in. She works at E. Corp, and I think power is what we’re all produced by at the end of the day. All of these characters need a certain amount of power to get what they want. She’s incredibly traumatized by the loss of her mother, and I think that that attributes to her characteristics—the necessity for power, and respect, the necessity for justice. Being swayed by powers is all just very seductive. But it’s in order, I think, for her to get something [bigger], which is the validation that comes from justice—that she actually avenged her mom.”

There are so many spoilers and theories out there, but when do you actually find out what’s happening in the story?

“Sam doesn’t tell us pretty much anything. He really won’t. I actually just texted him and said, ‘If I guess right, will you tell me?’ But then I was like, ‘Never mind.’ It takes too much energy, honestly, to like, manipulate [him into] giving me information. I’m the one that wants to know the most. Carly [Chaikin] is the one that knows, I think, the most about what’s going on in the show, but she doesn’t really care to know. And Rami [Malek] doesn’t care. Rami is just like, ‘I’m not getting involved in the drama. It will be what it is.’ But I’m the one that wants to know, even though I’m not researching it. I just kind of take a couple of details and run with the thing.”

What do you think people are going to be left feeling after the finale?

“Ooh, the finale is really intense. I’m interested to see what people’s reactions are. There are definitely some big surprises and reveals. I mean, it’s so intense. From what I’ve seen and what I know, of course there’s some things that [are] some big, surprising, edge-of-your-seat, you-have-no-idea-what’s-going-to-happen, it-could-go-either-way moments. Which Sam’s really great at. So there’s a couple of those where it’s like, ‘Oh my gosh. If it goes in this one direction. It’s going to change everything!’”

Stranger Things’ Linnea Berthelsen Just Answered the Biggest Question We Had about Her Episode
Emmy Rossum Wants Us to Stop Measuring Ourselves Against Other Women
There’s a Reason The Marvelous Mrs. Maisel Was Nominated for a Golden Globe