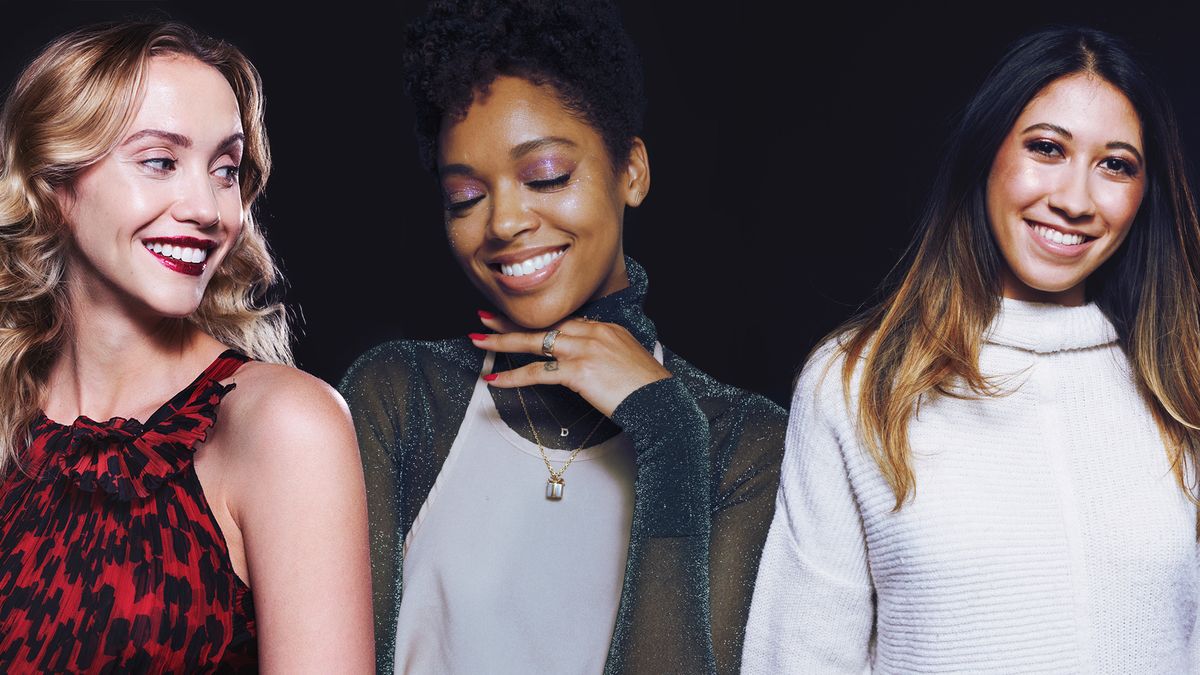 Turn yourself into a human version of a Kirakira filter.

There are two times of year when even the most glitter-averse embrace the sparklier stuff: one is Halloween, and the other is the holidays—more specifically, New Year’s Eve. Or maybe you wear glitter year-round, in which case, we salute you!

With the holidays in full swing and NYE only one month away (!!!), we teamed up with Bustle to bring you a handful of sparkly beauty looks to try before the ball drops. These not enough? Head to Bustle when you’re done to see the three looks their editors picked.

Monique wanted to try a twist on the classic smoky eye with this bronze version. “Step one was a touch of Chanel’s [shadow in] Pourpre Profond on her eyelids, which is a cream shadow, and then I went back in with a bit of Illamasqua copper cream in the middle,” says makeup artist Rachel Toledo. She rounded it off with a touch of Marc Jacobs liquid eyeliner and Marc Jacobs mascara.

“I used Margin blush by MAC on her cheeks, which is kind of like a peachy with a little bit of gold, just on the apples of her cheeks,” says Toledo. “As the highlight, I mixed Amber Gold and Hot Sand from Anastasia Beverly Hills on their [Ultimate Glow] Glow Kit palette. Then for her lips, I used the Make Up For Ever pale pink liquid lipstick with MAC Lipglass on it to make it extra shiny. And then under her eye, I took some Make Up For Ever Aqua Matic brown shimmery waterproof eye [crayon], and then I used Individual Medium Ardell eyelashes, and I just topped it with a little Marc Jacobs mascara.” The end result is a sleek bronzey eye and copper cheek that’s sparkly, but not too much.

If you want to really make the shimmer stand out, make sure the rest of your face is matte. Toledo used powder on Monique’s T-zone, forehead, and the sides of her nose so the glimmery bits really shone.

When your skin is as perfect as DaMonica’s, you want something that won’t require you to hide it—a glitter-eye look is perfect. To start, Toledo massaged a face oil into her skin to make sure it was hydrated and had a natural, lit-from-within glow. She then used a Make Up For Ever Star Lit Powder in a sheer, slightly purplish color and rubbed it on the base of her lid. “To get the glitter to stick, I took a bit of lash glue and I patted a tiny bit of it on her eyelid, then patted on some glitter. After that, I took a bit of purple-toned eyeshadow and dusted it along her crease using a fluffy brush.”

“Next, I just used a little Chanel concealer under her eyes,” adds Toledo. “I used Ardell’s Demi Wisipies Lashes with Marc Jacobs mascara, and then I used the Marc Jacobs pen liner just to pen the top. And then I used on the inside and the waterline the black Marc Jacobs Highliner.” To make it extra-extra, she used more glitter. “Then I took more glitter and I just tapped it above her cheekbones.”

The biggest bummer about wearing glitter is inevitably getting it off. To do that, there’s only one solution: tape. “Take a piece of tape and just stick it on your face and pull off, and it’ll pull off all of the glitter.”

I’ve always loved the classic ruby-red glitter lip, so I based my ideal holiday look around that. Step one was, again, ensuring my skin looked flawless. Toledo massaged in Embryolisse moisturizer, and then followed it up with a light layer of Tom Ford Traceless Stick Foundation applied with a fat, flat brush. “Then I brushed up your brows, and I used Anastasia Beverly Hills Tinted Brow Gel in Blonde and the Perfect Brow Pencil in Taupe, and I mixed the two. Next, I curled your lashes, put Benefit BADGal Lash Mascara on the top and bottom, and then a bit of Lucas’ Papaw Ointment on your lips.”

“To get the red lips, I used Urban Decay Revolution lipstick in F-Bomb and then went around the edges with MAC red pencil. Then I mixed a tiny bit of lipstick mixed with the red glitter, and I just pressed it on your lips. But if you’re going to be there all night, I would suggest mixing a tiny bit of eyelash glue or something stickier like a lip gloss before applying.”

If you want to really make the glitter stick, go with the eyelash glue, but just use a tiny bit.

Holidays The Holiday Edit
Part of the series: