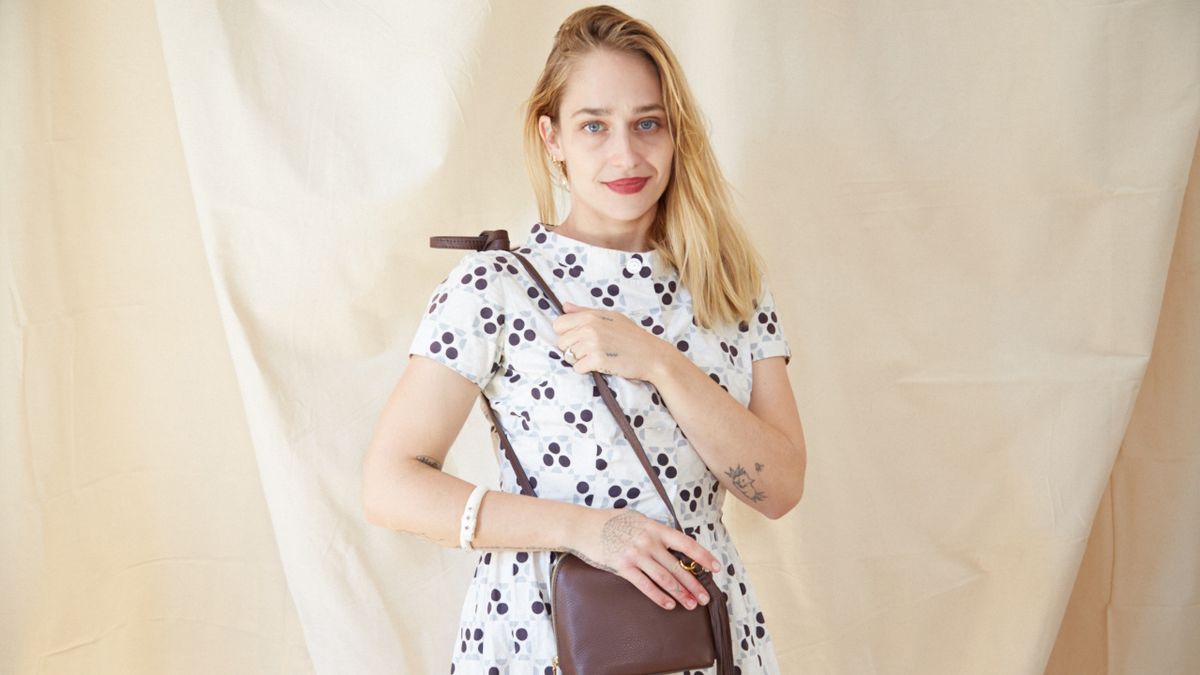 And no more than six hours spent in her art studio at a time.

Jemima Kirke doesn’t know how to draw hearts. Or at least not the kind of hearts we’re used to seeing. When handcrafted leather brand Hobo Bags wanted her to collaborate with them on a collection of 20 handpainted bags, they asked for hearts, and she replied with a nun holding a cigarette in between her lips, enveloped in smoke.

“I have a couple of nun ones that I did, and they’re weird. I was just sort of thinking nuns are loving and nice. You never think about nuns when we think about love,” she tells me over a staticky phone line from her studio in Red Hook, Brooklyn.

But clearly Kirke doesn’t see things as the rest of us do. Every bag in the collection has a heart that is anything but pink–there’s a neon green one with blue eyes, a bleeding red one in the mouth of a brown dog, and a flesh-colored one drawn as conjoined ear lobes. “I have a lot of one-liners in my head that are images. That’s why I like getting tattoos and why I [give] ideas of tattoos to friends. It’s like, ‘Oh, OK, this is easy. It’s like a tattoo idea.’ And so I just started making sarcastic little hearts.”

Listening to her recognizable English accent with an attitude that says I don’t care with zero cynicism, it’s hard not to feel as though I’m speaking with Jessa Johansson, Kirke’s character on Girls. And then it’s hard not to immediately feel bad for feeling that way at all, considering Kirke is much more than a character or a role or an actress–especially since she never planned on being any of them at all. “I have an interest in acting, and painting is something I have to do... Well, obviously it's something I don’t have to do. No one gives a shit if I do it or not, but my interest is endless. I paint every day, and it evolves.” She pauses before adding, “With acting, I do feel like there might be a cap on it of how much I have. I’m tolerant of it some days.”

Since ending Girls in April of this year, Kirke admits that there are days where she misses being on set. “I miss having the luxury of having a guaranteed place every year that I can go back to and work on a single person. Every year, the same thing, which is so fucking awesome.” But now she has more time to focus on her artwork and do things like draw a nun chain-smoking on a leather bag when the opportunity to do so presents itself. After all, she was always a painter who was skeptical about being on TV (Lena Dunham revealed earlier this year that Kirke tried to quit before season 2).

Instead of portraying a character, Kirke now spends most of her day painting other characters, but her stint in acting still finds its way to the canvas. “I think acting is very much about observations of yourself and society and sort of translating what a single sort of act might mean in a story. I paint people. It may be just a person sitting in a chair with their hands on their head or buttoning their pants...but instead of an enshrined moment that is... It’s like extraordinary rather than ordinary.”

Her least favorite part about being a painter full-time is the isolation. “It's just kind of lonely. I try not to spend more than six hours in the studio at a time because I really start to feel a little insane.” And her favorite part is surprisingly–the money. “There’s a fine line between a hobby and vocation. It’s actually really offensive when someone thinks of art as a hobby. When you get paid for it, it’s sort of validating that you are a functioning, working person in society and not just like...an indulgent masturbator,” she says with a loud laugh that vibrates through my speaker. It’s the first time she did so our entire conversation, and the way she signs off from the interview. Ironically, or maybe not ironically at all, Jemima’s Hobo Bags collection is available today, ranging in price from $185 to $500.

30 percent of proceeds will go towards Project Create, which provides accessible arts education to kids and families experiencing homelessness or poverty.