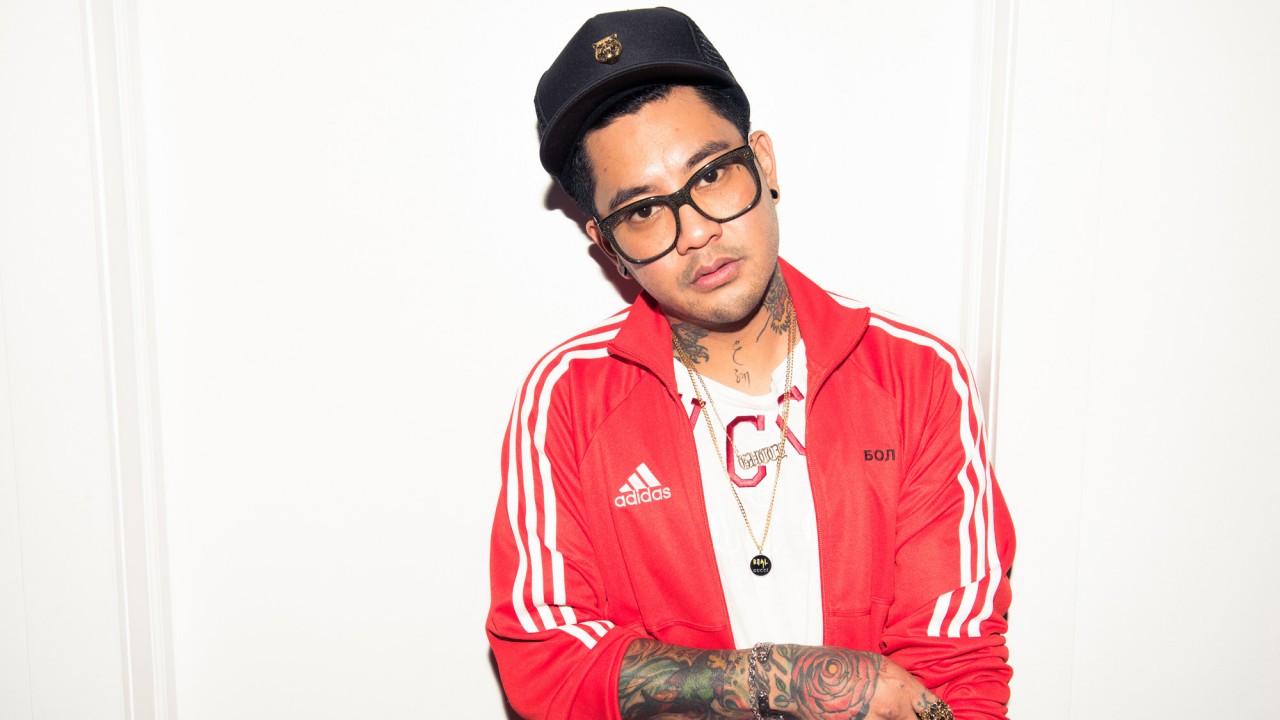 He also mentors Gucci Ghost & does pop-ups throughout North America.

You’d be hard-pressed to find someone who isn’t familiar with tattoo artist JonBoy or at least his work. Images of his tattoos are currently flooding the internet, identifiable by his signature thin lines, small size, and, of course, the monogram Gucci wallpaper they’re photographed in front of. JonBoy has a thing for Gucci—a full-on obsession with the brand, actually. The artist, who works out of renowned NYC tattoo shop Bang Bang under the mentorship of Keith “Bang Bang” McCurdy, has so much love for the brand that he even has a custom Gucci stool made for him by none other than Gucci Ghost (because, of course).

JonBoy fell in love with tattooing at 19 and was a youth director before fully throwing himself into the tattoo world. Although he’s devoted to the art full-time now, his tattoos are linked to his beliefs. “A lot of tattoos have to do with my faith and reminding myself why I’m here and who saved me,” he says. “It’s a process. It’s really important daily to get your mind right and understand that this life we live, there’s a higher purpose in why you’re here.”

Before scrolling any further, a warning: If you aren’t already obsessed with JonBoy, that may change *very* soon (as in when you finish this story). When we chatted with the artist, who tattoos Kendall Jenner and Hailey Baldwin, we learned that he’s not just talented—he’s also super kind and hilarious. You might find yourself wanting a new tattoo. 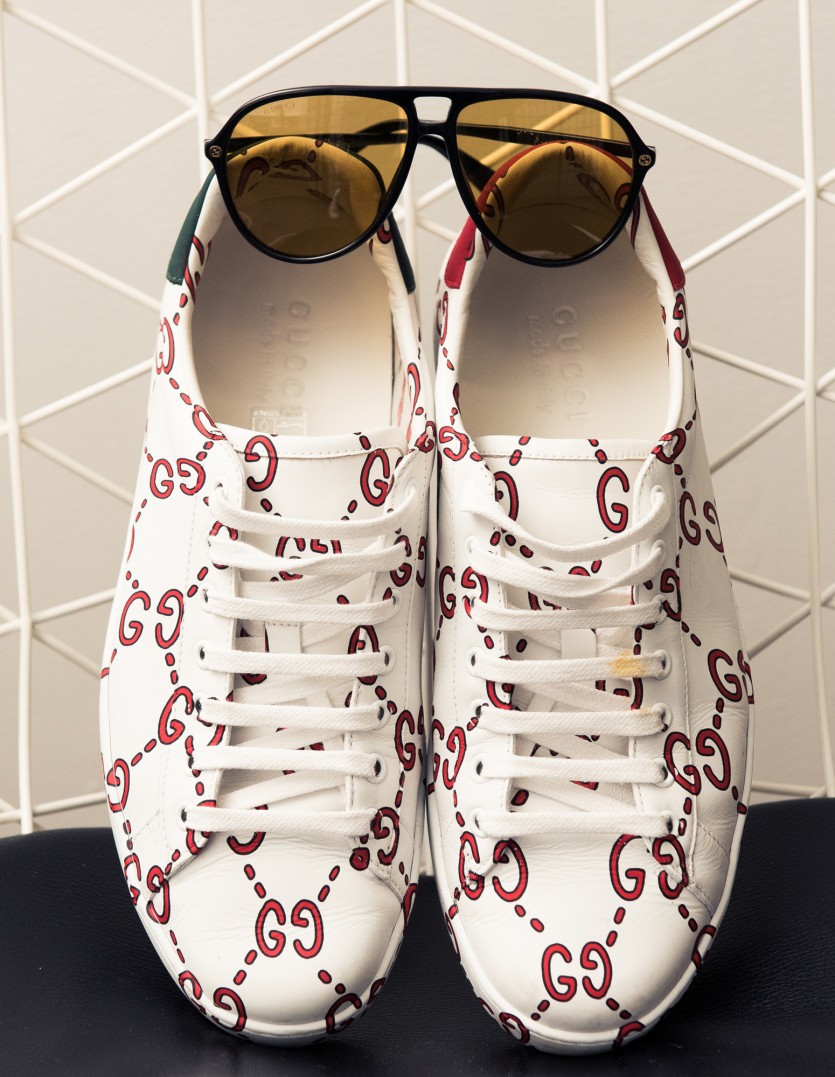 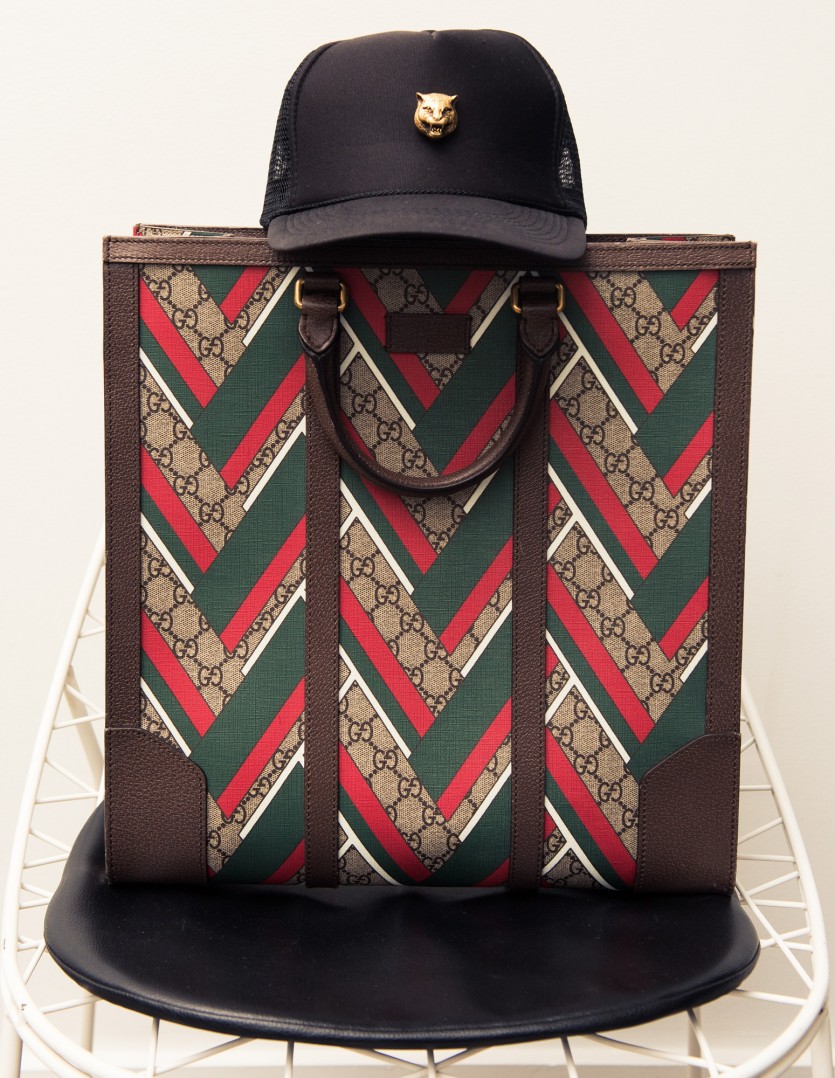 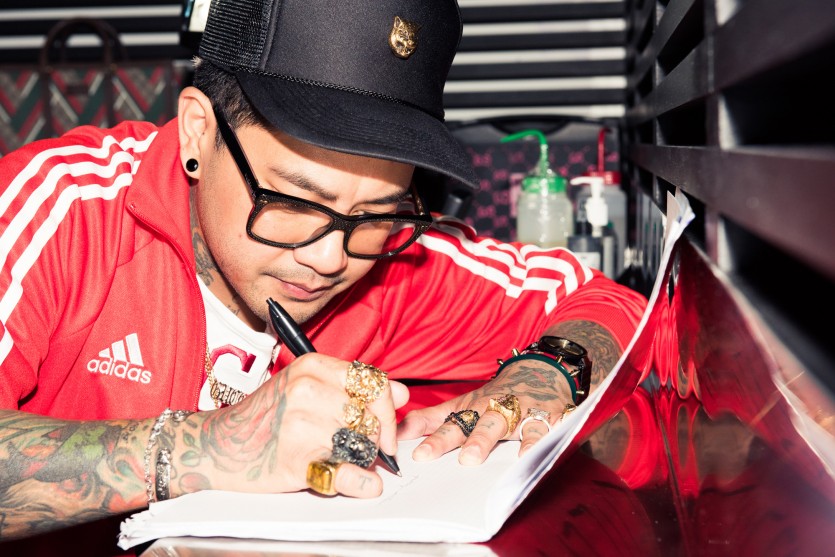 He got his first tattoo in his late teens:

“I first started getting tattooed when I was 19, and I fell in love with the art—it was a magical thing. I really enjoyed the process, and I tried to approach apprenticeships every time I got tattooed. [This was] in the ’90s, so all those guys—bikers and the rough-and-tumble guys—discouraged [me]. I ended up pursuing the youth industry. I did two years of seminary at Zion Bible College in Rhode Island [and then] became a youth director in Iowa of all places.”

He learned the art by practicing on grapefruits:

“I started hanging out at a local tattoo parlor over there in Decorah, Iowa. I had met a guy named Kevin Fitzgerald, who was an old biker dude. I was like, ‘Is it cool to hang out here and maybe help out answering phones and taking out the trash?’ That’s how it all began, and I just started practicing on grapefruits. I learned everything from building my own needles to making my own inks and understanding the machinery—a lot of things that I feel today’s tattooers aren’t educated in because it’s really difficult, especially now, to get a formal apprenticeship and to learn those things. I’m a firm believer in making sure that you get into it the right way so you don’t mess people up.” 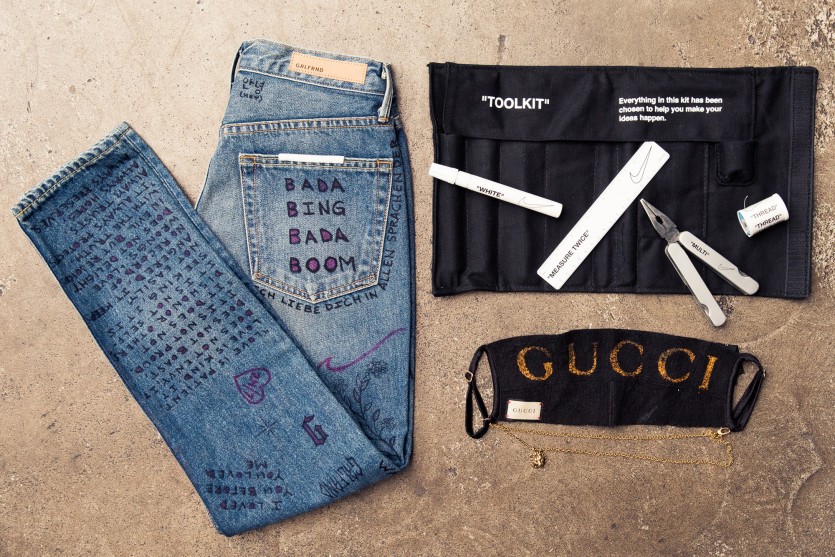 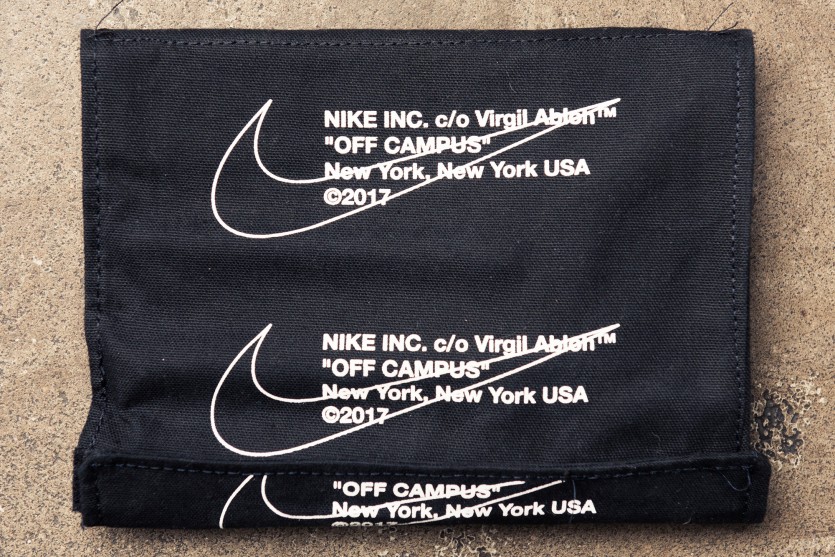 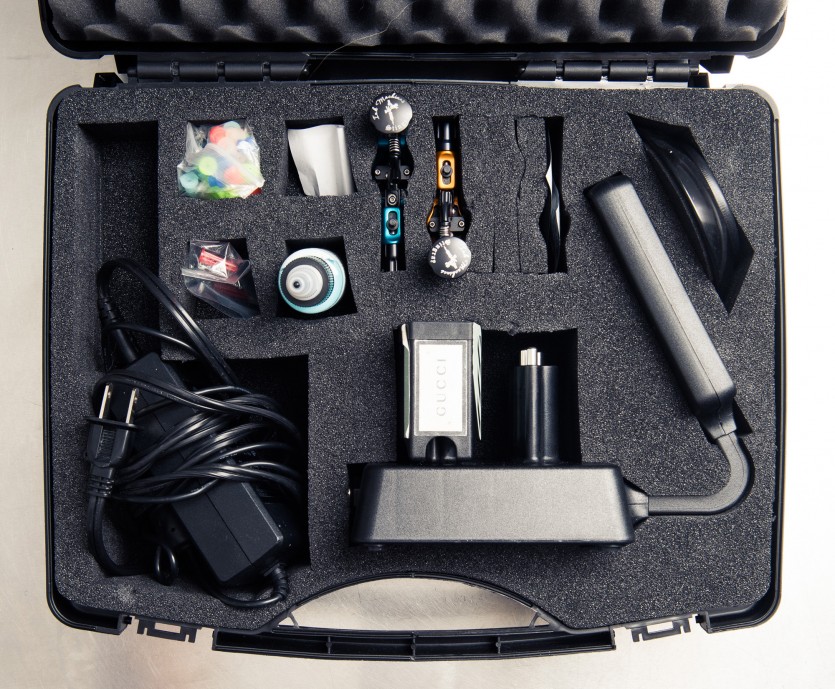 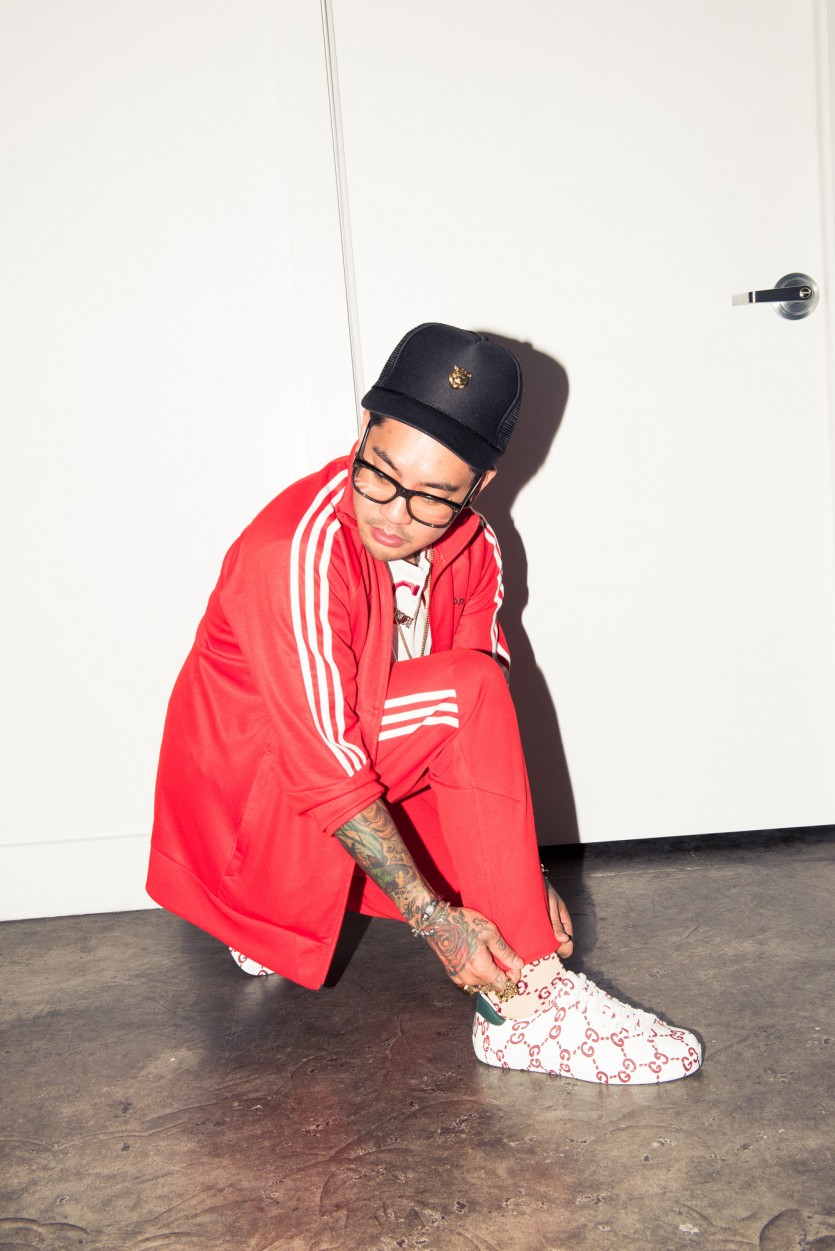 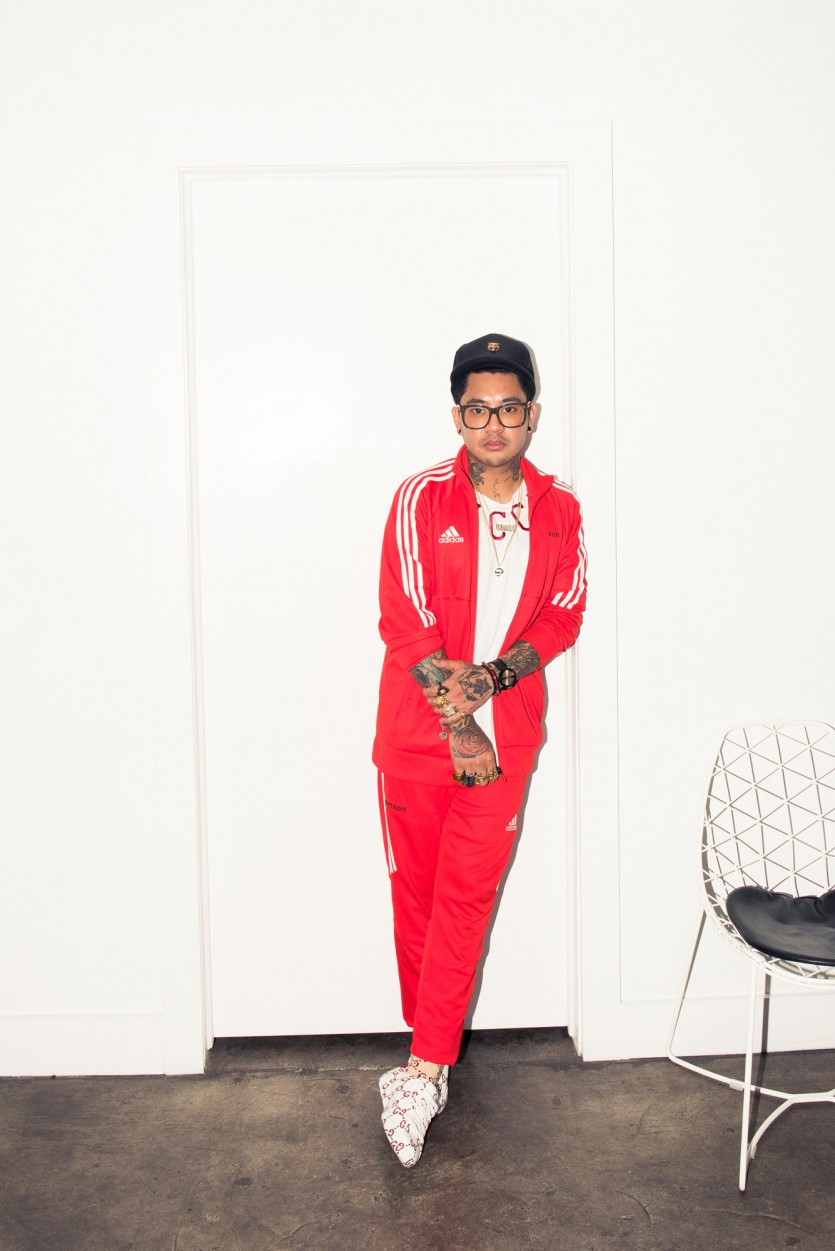 Working at Bang Bang is an honor:

“[Keith ‘Bang Bang’ McCurdy is] someone that I truly admire as my mentor. He really understands the industry—the business side of it. There’s so much that goes into dealing with clients who are most of the time going through something and that’s why they’re getting that tattoo. It’s really an honor that I get to work under the best tattoo artist. New York is full of shops, and I feel like Bang Bang Studio has set the standard that needs to be the standard in all tattoo parlors. You’re dealing with people’s health, and you’re dealing with the permanency of a tattoo.”

Gucci is not only an inspiration, it’s a lifestyle:

“The level where my career is right now, being at Bang’s, I find my inspiration where I am. All I have to do is take a few minutes, walk around the stations—all these guys that I work around are the best tattoo artists in the game. My inspiration [also] comes from Gucci. Alessandro’s done such a great job in opening the doors for artists—it’s a new wave in the fashion world. They caught my attention because they started using really cool imagery and a lot of it reminds me of tattoos—tigers and snakes, even the Asian/Japanese type stuff. I think that’s what kind of got me on this obsession with Gucci. I genuinely, truly, am a lover of Gucci and what they stand for. Everything’s Gucci; my dog’s Gucci, life’s Gucci [laughs]. It’s a lifestyle.” 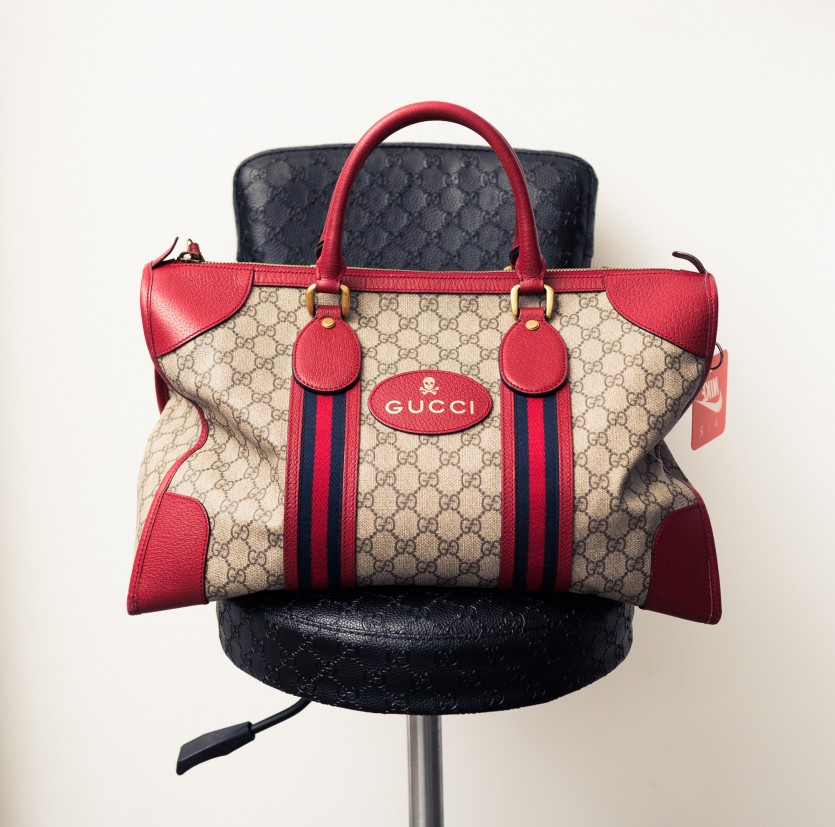 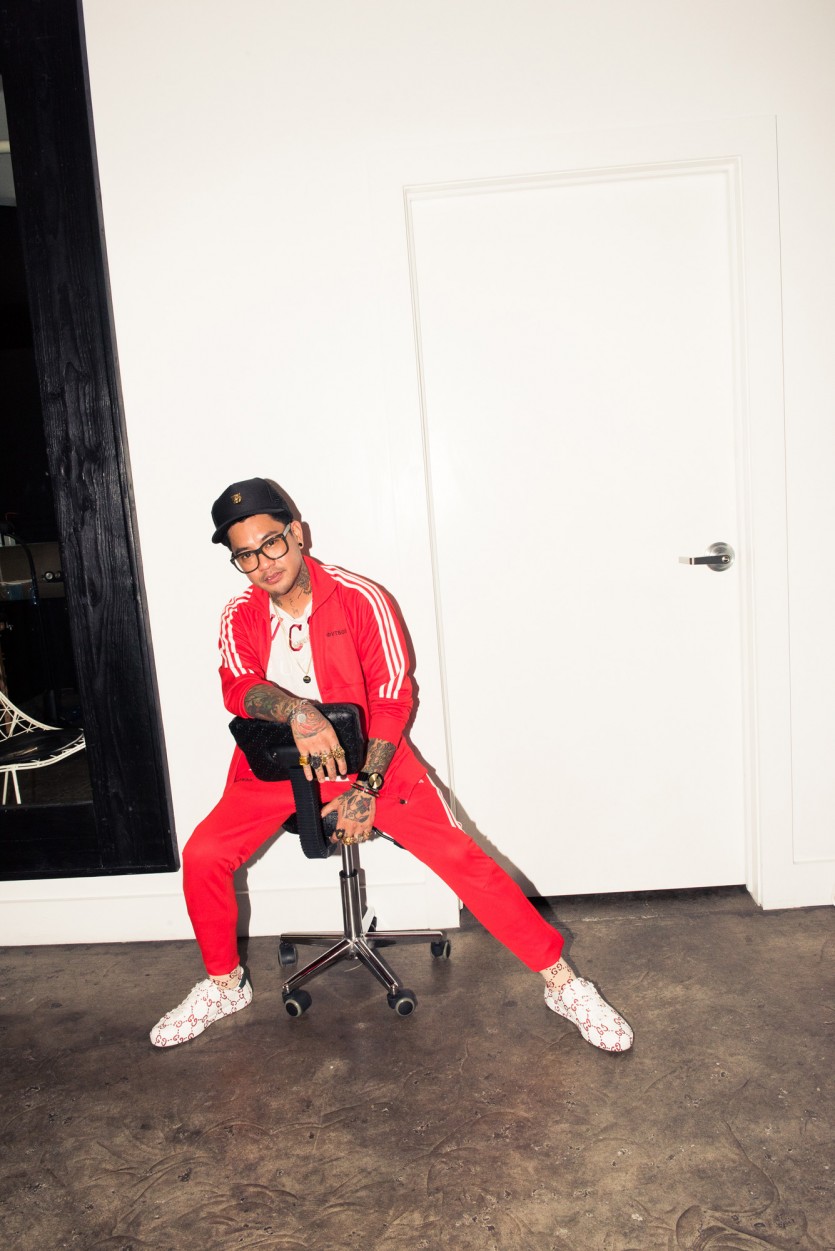 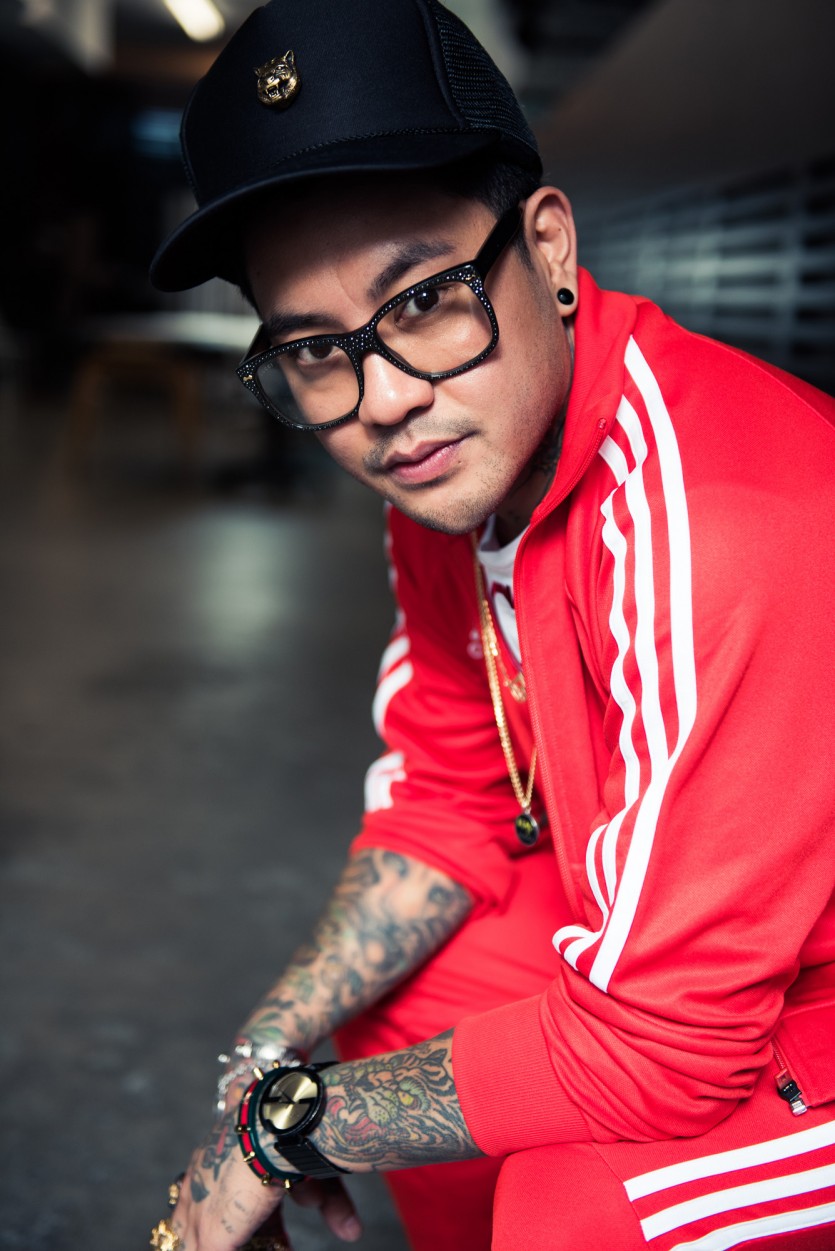 The importance of his infamous pop-ups:

“I love getting around. Pop-ups are awesome, and it’s amazing that I get to travel through what I love to do. Working with these brands, it’s great. I would’ve never thought that Nike would’ve used a tattoo artist. Doing the whole Gucci Ghost thing, that was a dream. [Then] a pop-up at Barneys. It’s really neat being able to bridge that gap with the fashion world and the tattoo world. I feel like a pioneer almost because I feel no one was really doing pop-ups at retail stores as far as tattoos go.”

Working with Gucci Ghost turned into mentoring him:

“Gucci Ghost [is an] apprentice of mine. Even though he’s not here with me every day, I’m teaching him. I’ve given him a machine to work on his friends, like, ‘All right, keep it safe, make sure you’re keeping things sterile.’ He’s already got the feel. He did a tattoo on me. That kind of changed everything because I’m like, ‘Wow, you’re a natural.’” 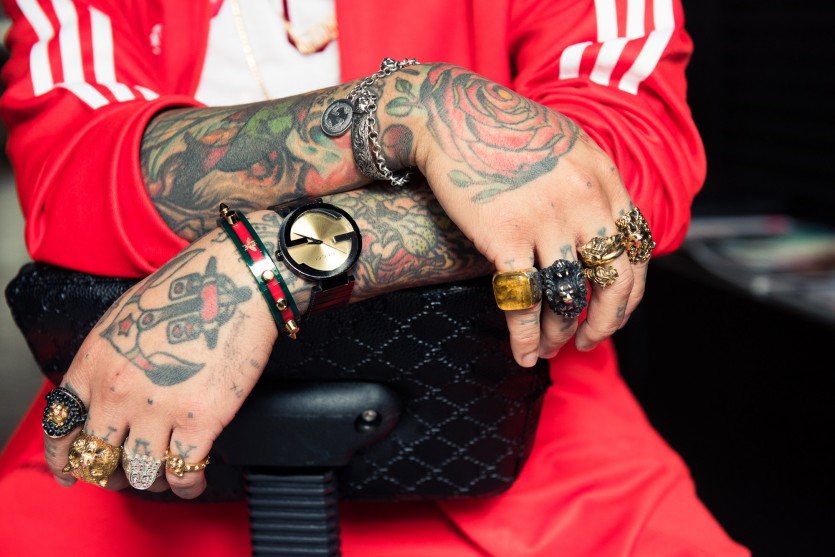 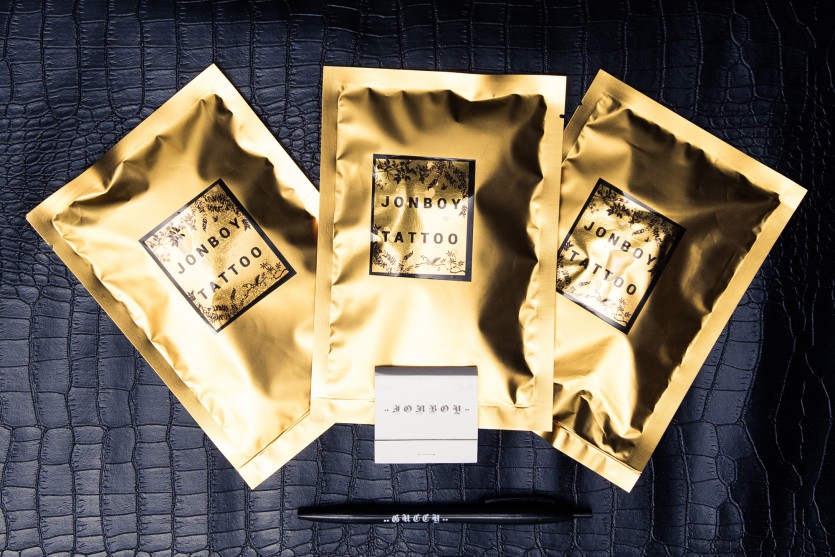 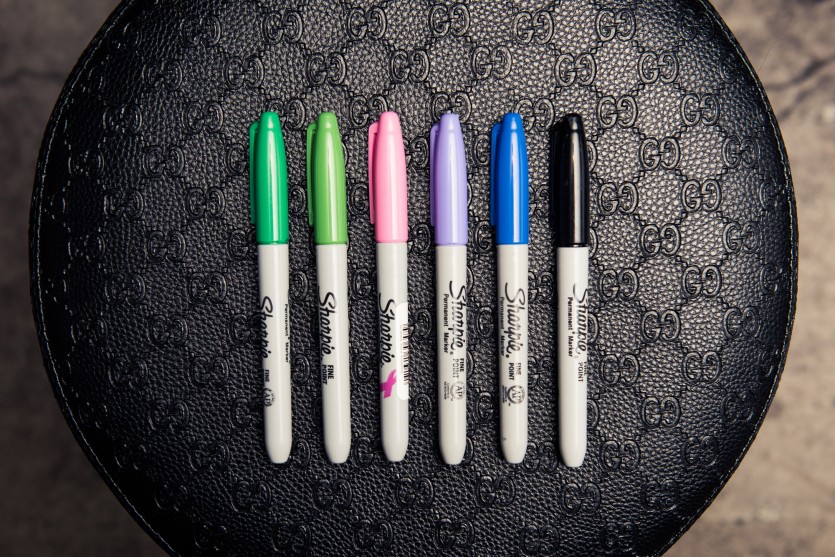 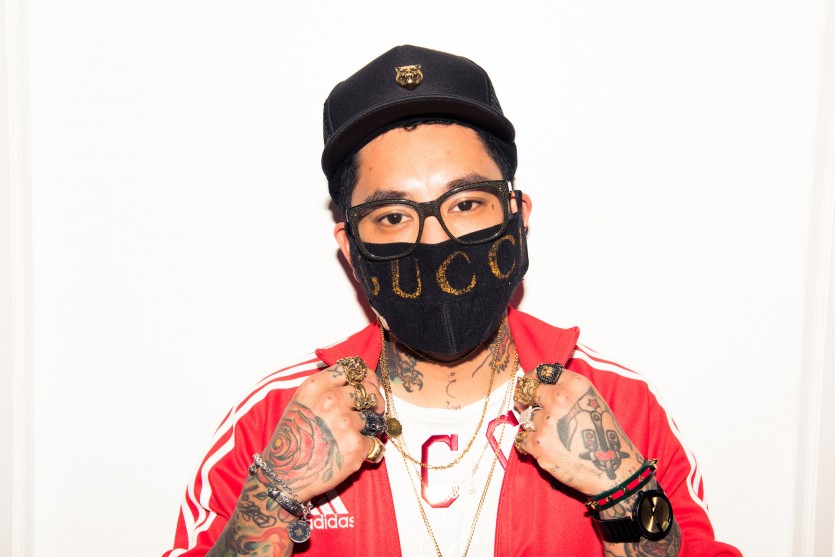 On why patience is everything:

“You have to really learn how to deal with people and be patient with people. That’s the hardest part. That person has been thinking about that tattoo for years, so work with them, and if you can’t do it then let them get tattooed by someone else or learn how to do it. That’s why I’m busy. Some of these tattoos are the tattoos that most artists can’t do or don’t want to do because they’re hard—they’re small, so there’s no room for error. I grew up with a mom and a sister, and they had issues with their looks. I see how important it is to really make sure a female is happy with their tattoo. I want you to be able to look at your tattoo in the mirror and be like, ‘Wow, I look sexy, I look good.’”

Everyone is a celebrity to him:

“It’s exciting. I don’t get starstruck, but it’s neat tattooing these people that are on this platform. They’ve had such an influence on our culture that I feel honored that I get to even mark them with my machine. I treat everyone like a celebrity because what does that even mean, a celebrity? You’re being celebrated, so I’m celebrating you. I’m here for the people. I am [at a point] right now in my career where people just want to get tattooed by me, and that’s special, so I make sure that every day I’m on it and that my head’s right and that I’m there for my client.”