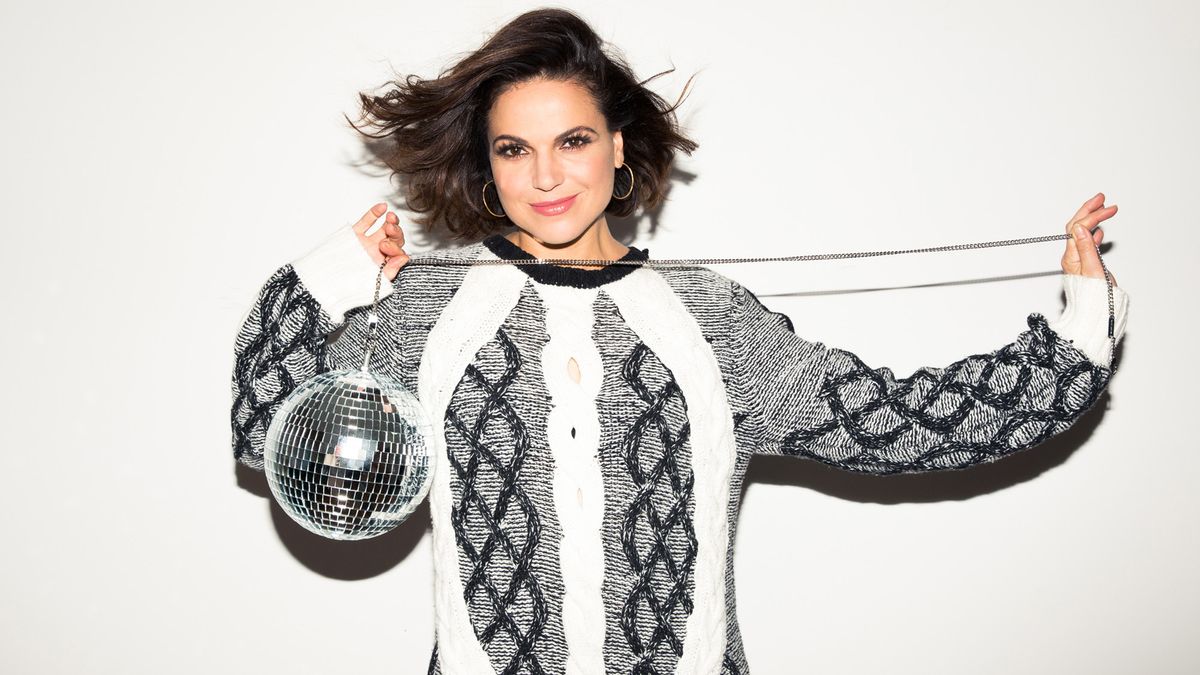 Roni is no Regina.

There haven't been a whole lot of shows that have kept me captivated for multiple seasons. Scripts get weird, good characters get killed off, and, sometimes, I just get bored. Still, I’ve managed to stay hooked on Once Upon a Time, watching through its many twists and turns, exciting introductions, and heartbreaking exits. Part of the reason? I love following these fairy tales, and I never know where things are going or who will pop up next. Another part is Lana Parrilla.

For six seasons, fans of the show have watched as the actress took on two fascinating roles: Regina and the Evil Queen. But now, the story has been switched up, focusing on an older Henry and a whole new curse, and Parrilla is now known as Roni, a badass bartender in Hyperion Heights. I couldn’t help but wonder how she feels about it all—this new persona, the (mostly) new cast, and how the show has changed her life over the years. So I asked her exactly that…after our playful photoshoot that also involved a disco ball.

This is a whole new story. Do you need to watch past seasons in order to understand what’s happening?

“There are three of us that are from previous seasons, so it’s kind of nice to understand those backstories. It’s not necessary, but there are a lot of references to our characters’ old identities. There’s mention that, down the road, characters talk about wrongdoings, and people wouldn’t know what those are if they didn’t watch the first six seasons.”

What’s it like working with a mostly new cast?

“It’s as if I were to get a new job. It’s different, but it’s been awesome getting to know people and working with new characters and new dynamics. I do miss my old team, but I also really love working with these new people.”

We were also introduced to a new Cinderella!

“What might be confusing for some people is, ‘Didn’t we have a Cinderella? ‘Didn’t we have those characters in previous seasons?’ But these fairy tales are told in different cultures and languages. It’s kind of like religions in that way, too. Certain icons or statues cater toward whatever culture or religious group they’re part of—there’s a slight variance between how they look. Now we have a Latina Cinderella, and we had a Caucasian Cinderella. Maybe in the future we’ll have an African American Cinderella. It gives every little girl and little boy an opportunity to dream that maybe one day they can be Snow White or Prince Charming.”

Your new character is sort of a tough bartender. What’s it like playing her?

“A lot of people say, ‘Oh, she reminds me of you.’ I guess I’m a bit rough around the edges as well. She is a lot of fun to play. Her name is Roni. We don’t know why or how she got this bar, but she doesn’t know who she is. She is cursed like everyone else. There’s this whole backstory of each character that we’re just getting to know. [Roni] still has her sass, and I think that’s one thing we loved about Regina—she was quite sassy. But Roni’s more mature and more involved. She’s the wise one; she’s been there, done that, she’s seen it all, and now she speaks from a place of experience and is able to be a mentor and a guide to a lot of people. She’s starting to find her inner strength as well, standing up to people who have taken advantage of her and others over the years. She’s also out of pantsuits and in denim and rock shirts. She’s the girl you want to have a drink and a nice chat with at the bar.”

Do you have a favorite new character?

“I really love Henry. Who else could be my favorite except for my son? I do miss Jared [Gilmore] a lot, but I love Andrew, who is playing older Henry. I think he’s doing a phenomenal job. He did his homework and studied Jared, and learned how to portray this character and bring his own take to it. And now that Henry’s a man, he is going to be played differently. He has been on his own since he was about 18 years old and has a good 10 years of life experience that we’re seeing in action now. That’s really cool. I want to learn more about Henry. I want to learn about his adventures. This is his story, and that’s what’s so great about it.”

OUAT fans are pretty intense. How has being on the show changed you?

“It’s not just about my career and me doing a great job and playing an awesome character. This is about something bigger, and you kind of want to approach your whole life that way. I’m like, ‘Okay, is this a decision that’s good for everyone involved?’ The next project I do, I want to make sure that I’m telling inspiring stories. I’m really proud and honored that I’ve been part of something that has made a difference for so long. I hope it keeps going, because it really does promote positivity in the world.”