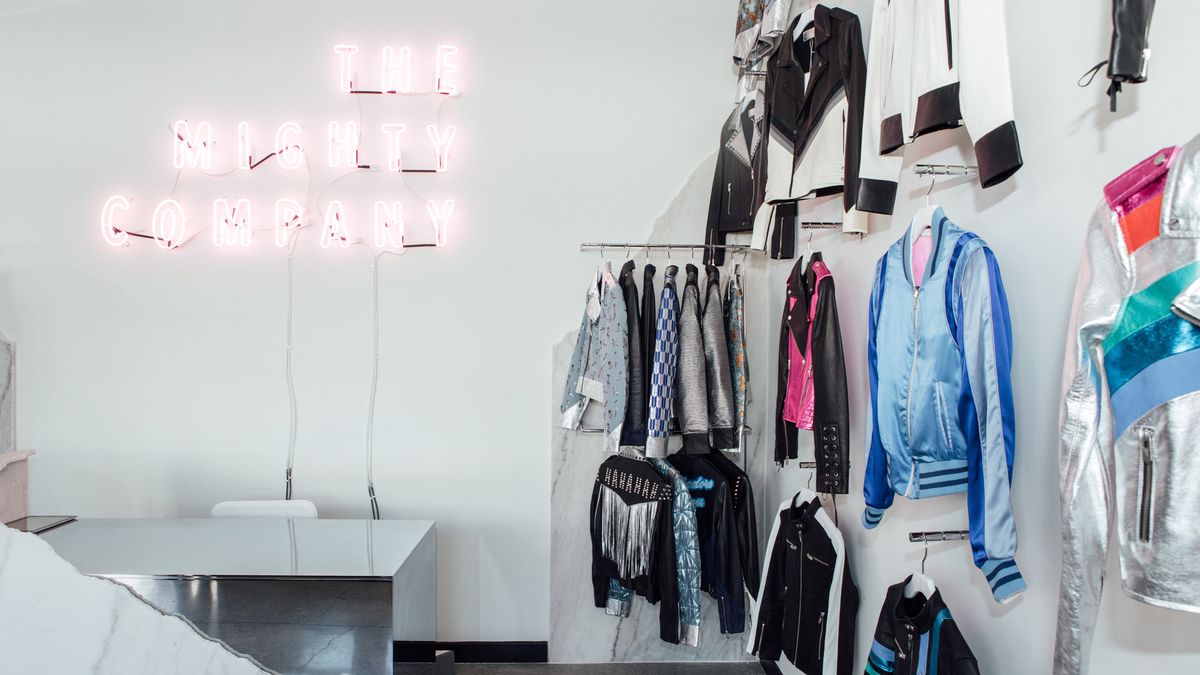 Visual artist Jessie Willner, founder and creative director of The Mighty Company, set out to design a jacket that people would want to keep forever. “I landed on designing jackets because I liked that they were a really permanent item in every closet,” she tells me. Having originally worked as a graphic designer, Willner was drawn to designing outerwear because of people’s connection to it and the fact that a good jacket just isn’t easily forgotten or discarded. “I wanted to create unique versions that I hoped would be passed down or given to a loved one instead of thrown away like some other fashion pieces can be.”

The result is a line of jackets that reminds us of everything we’ve ever loved and yet looks unlike anything we’ve ever seen. Each one has the same classic leather jacket silhouette reimagined with rich vibrant patterns and metallic details. “I’m first drawn to wild, crazy pattern things that are flashy, but then I want to put that in the context of a perfectly fit jacket,” Willner tells me before briefly pausing and laughing, “I tried to condense my imagination into those things, and my imagination looks like a psychedelic acid trip, probably!”

Her collaboration with the famous French mill Mahlia Kent probably has something to do with the elegance in her execution. The mill was founded by a collaborator of Coco Chanel’s and is famous for its luxury tweed and the weaves it still makes for CHANEL. Being made alongside some of fashion’s most luxe items, The Mighty Company’s jackets have the same feel with an entirely different price tag. Whereas most jackets of the same quality go for $2,000 or more, Willner’s designs range in price from $695 to $995.

The decision to make a more accessible jacket was part of Willner’s goal in starting the line. She didn’t just want to create something people wouldn’t throw away, but that they could *actually* afford to buy in the first place.

Equal parts Bowie and French girl, the jackets can be styled with anything, although Willner admits she has a soft spot for metallic paired with metallic. “One of my favorite ones is the Toulouse, which is the one with all the silver naked ladies on it. I’ve worn it with this crazy silver dress that I have because obviously I love metallic on metallic, but I think it looks amazing with a pair of Re/Done’s and just a cutoff white shirt. I think it stands out and speaks for itself.”

For the girl who wants the Ziggy Stardust statement piece, Willner has made other jackets like the Toulouse. There’s the space-age tweed of the Lillie or the shimmery leopard print of the Vouvant. And for the girl who is more drawn to the classic ease of Parisian style, there’s the perfect leather simplicity of The Cannes and Bordeaux.

Having launched only in May of last year, Willner has already expanded The Mighty Company’s influence past the internet, recently opening up a store on Melrose. The entire space feels like one of her jackets, with neon signs, mirror walls, and pink pillows. “I had this idea to make the whole place one big dressing room.” It’s a store you want to stay in endlessly with your friends, trying on a series of jackets you’ll want to keep forever.