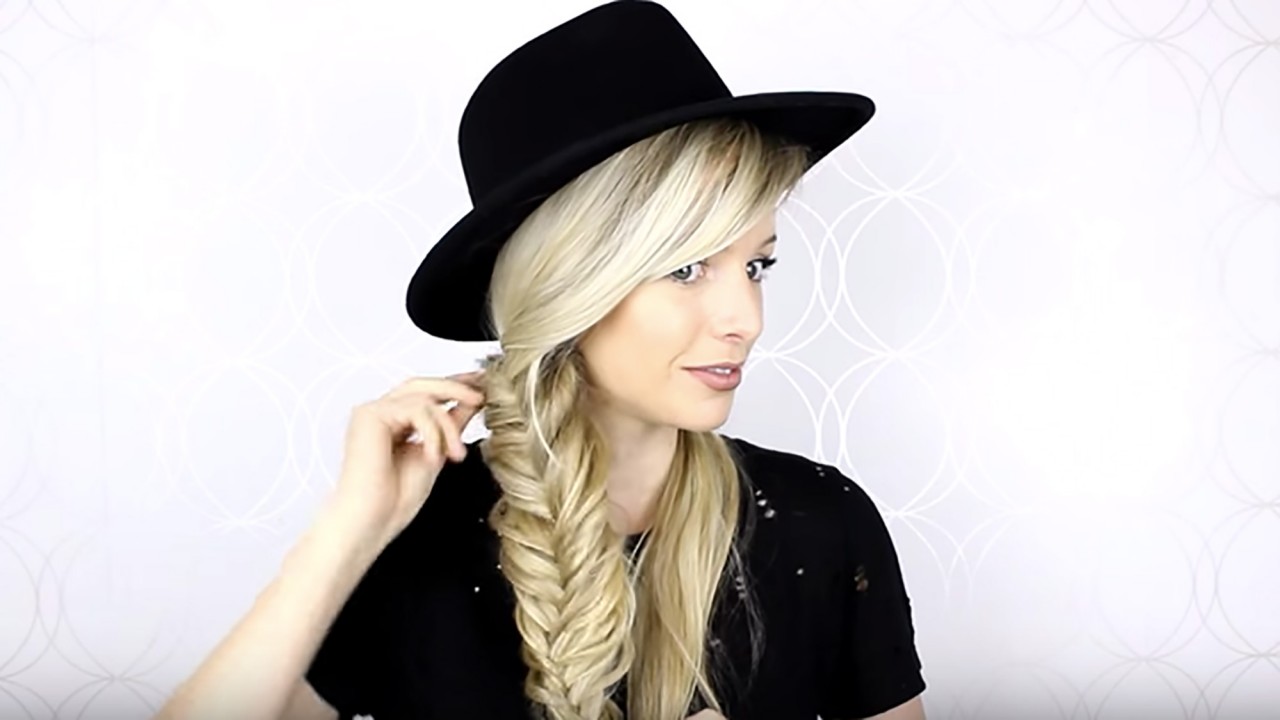 9 Hairstyles That Look Great Under a Winter Hat

There’s nothing quite like buying a cute winter hat only to put it on and realize that it just doesn’t work with your hair. Whether you’re planning on rocking a wide-rimmed fedora, a beanie, a beret, or those baker boy hats that are all over Instagram these days, knowing what to do with your hair underneath is key to feeling confident in the hat itself. And being able to style it in a way that’s not only cute, but quick and easy too, is almost just as important. No one wants to have to spend hours on your hair only to cover it up with a hat.

In order to figure out the best styles to pair with all our favorite winter hats, we talked to hairstylists who are quite literally experts at knowing the right hair for every occasion and outfit. From the simplicity of wearing your hair straight to a more complicated low bun or ponytail, there are hair options across the whole spectrum. So next time you’re debating whether or not to give into an Instagram trend and buy that surprising winter hat, don’t let the question of how to wear your hair stop you. Odds are, finding something that works for you is a lot easier than you think. Here are nine hairstyles that are perfect for rocking under your winter hat, so you can go ahead and buy that beret already.

Hairstylist Anna Cantu, a Farouk Systems Global Artist, suggested a low ponytail as one of the many ways you can style your hair to be worn with a hat. Whether you want to wear your ponytail to the side or in the middle is up to you, though. The tutorial above shows options for both center and side-part low, sleek ponytails, giving you options for whichever look you prefer.

Every professional I talked to named loose, full waves as the number one easy go-to hairstyle for wearing under hats. “Straight [hair] is nice under a hat, but I definitely like to have a little texture and wave to it,” hairstylist Oscar Blandi says. “Especially when wearing hats like beanies, berets, or fedoras, it looks better to keep a little wave.”

Looking for a wind-proof style to put under your hat? Cantu suggests trying two french braids. If you have a little bit of extra time and are looking to try something a little more over-the-top, try following the above tutorial.

Stylist Dan Islava from Antonion Prieto Salon notes that a loose braid could translate to a more “editorial, fashion” look under a hat. If that’s what you’re going for, try aiming for styles shown in the tutorial above and make sure to “pull out pieces to make it look creative,” as Islava says.

Cantu tells me that spiral curls are another fun, volumizing style for under a hat, too. If you don’t already have curly hair, though, this might seem like a lot of effort to achieve. Luckily, though, there are a ton of options for achieving spiral curls that don’t even involve heat (see above video), so rocking the look is easier than you probably think.

Blandi also suggests trying out a low bun under a hat. “I do believe that a nice tailored or intricate bun that is off to the side can look nice,” Blandi says. “I think nowadays people can be more free with what they wear with their hats. It’s up to you if you want to draw the attention to your hair or the hat.”

Whether you want to opt for the sleek, tailored bun, as Blandi suggests, or something a little more loose and messy, like the above tutorial, there’s something for everyone.

If you think that wearing your hair straight under a hat is too boring, or doesn’t have enough movement, there are options that won’t completely hide your locks away, don’t worry. Islava tells me that “a good blowout for body and movement...would give it a more polished but still sensual look when you add the hat.” Don’t have time to stop by a salon to get said blowout? The tutorial above has you covered.

This tutorial offers not one, but three ways to style fishtail braids under a cute cold-weather hat (wide-brimmed fedoras are always a good idea, right?). A loose, exaggerated braid was suggested by both Vitelli and Cantu, too, so you know it’s a professional-approved look.

Another style suggested by multiple pros? A sleek bob. Scott Waldman from Antonio Prieto Salon tells me that both textured bobs or blunt bobs are popular right now and can look really amazing with a hat. Personally, Waldman says he prefers a blunt, sleek bob.

“Personally, I like when a blunt bob is worn straight. Use a flatiron with small sections to enhance sleekness and shine,” Waldman adds.

The tutorial above is ideal for perfecting a sleek bob, but feel free to add some texture, too, to mix things up.

If you’re not sure where to begin with figuring out what to do with your hair under your winter hat, the styles above are definitely a good starting point. However, experimenting with different looks (or variations of the above options) and throwing a hat on top is always encouraged, too. After all, as Cantu tells me, “anything goes if the hat is super cute.”