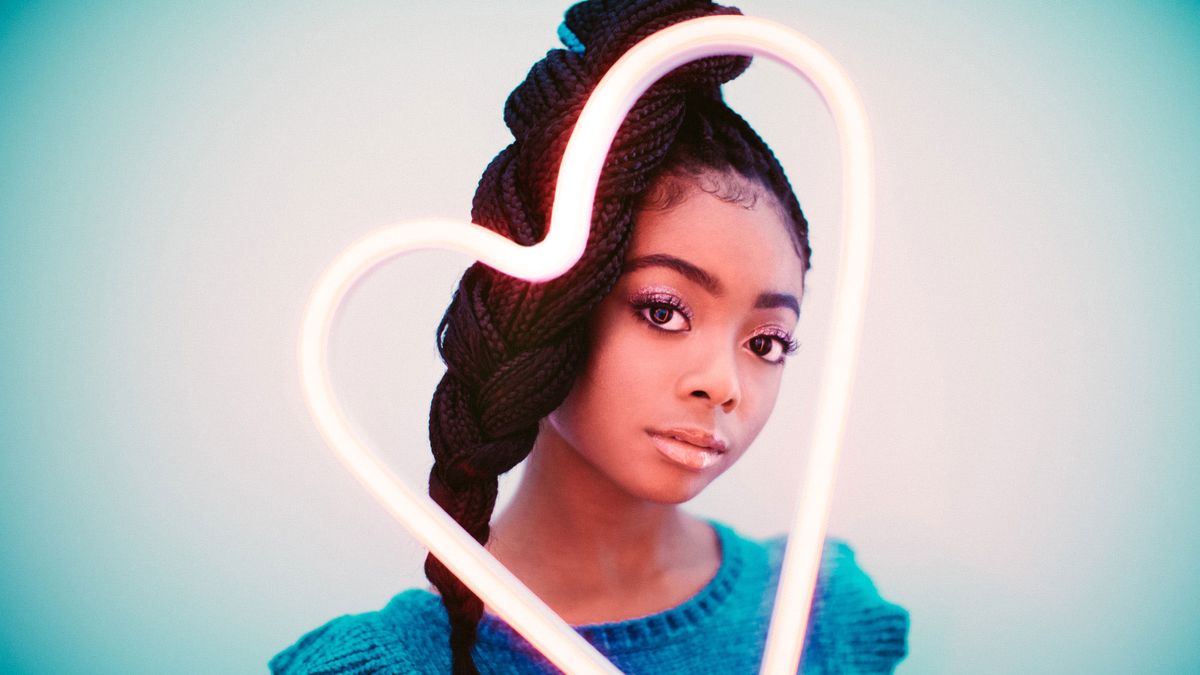 She also gives better style and life advice than most adults.

When I first saw Skai Jackson in person, I was sitting across from her at the Libertine SS18 show. She was wearing a white, fluffy sweater, a shiny red pleated skirt, and silver heels. Even though Jackson walked in by herself and sat alone for some time before the show began, her confidence was easily double that of all the attendees in the first row combined. If I hadn’t already recognized her, I would have thought she was much older than fifteen (although she tells me heels help with that). But then again, it’d be hard not to recognize the actress who already has ten years of acting experience, has starred in two Disney Channel shows, and currently boasts 3.9 million Instagram followers.

This past season she attended NYFW for the first time and recently has been posting more fashion-oriented ’grams on her account, decked out regularly in Marc Jacobs and Alexander McQueen. When I ask about her favorite designers, she quickly lists an impressive amount of names, one of them being Prabal Gurung, a favorite because of his slogan tees. “He had all of those cute t-shirts that said, ‘I Am Michelle’ and all of these inspiring messages,” she tells me, although it’s no surprise that she’d gravitate towards Gurung’s fashionable expression of positivity. Jackson is a firm believer in treating others how you wish to be treated: “I think we should all support each other. I feel like we all need to have each other’s backs, and I think it’s amazing that we all can win. It’s not a competition. There’s room for everyone in the industry.”

And even with her confidence and optimism, Jackson isn’t immune to nasty comments on Instagram. “That’s why there’s a block button!” she tells me. Although she’ll just as easily ignore as she will stand up for herself, famously clapping back at Azealia Banks, who tried to body-shame her on twitter when she was only 14, with a single tweet: “When a no hip having 14 year-old has more class than you. Worry about your career. Get one.”

As for her own career, Jackson has three: model, actress, and now fashion designer, having just launched a line of her own with Nowadays, which is available at Macy’s until December 31st.

When she came to Coveteur HQ, I realized the outfit she wore to Libertine was of her own making. I also quickly realized, even if I am ten years her senior, she could still teach me a thing or two about styling outfits, living life, and finding inner confidence—so I decided to ask for her advice on a couple things. Read on to see what Jackson thinks is the best method for picking out an outfit, why sometimes you just need to splurge on a Céline bag, and how to completely brush off the haters.

When you need extra confidence, just add a pair of heels:

“Yeah, I definitely feel confidence with more height! I’m only five feet tall, so I’m short. Even with heels, it makes me look tall, and I feel so much taller. Like, even in pictures, people think that I’m over five feet, and when they meet me in person, they’re like, ‘Oh, you’re so short. I didn’t expect that because you look so tall in pictures!’”

You can manifest your dreams if you don’t give up:

“My first fashion memory would have to be when I was around four years old, and I would just have Barbie dolls, and I would go around the house looking for materials to make clothes for them. That was like my first fashion memory. I was like, ‘You know what? This is something that I really want to do, and maybe I can become a designer one day.’ We always speak [things] into existence, I say.”

A purse (or Louis Vuitton or shoe...) splurge is the best way to treat yourself after hard work:

“First of all, I love purses, so I did a little splurge on my Céline mini bag, which I think is so cute. And then also I did the kind of splurge on the Louis Vuitton x Supreme. It’s amazing! I bought the crew neck. That’s another splurge. And then also I love shoes, so just any great shoes. Now I’m like, OK. I can spend a little bit more money on shoes because I know that my feet aren’t going to grow, so I’ll have them forever.”

“Honestly, I love sneakers with dresses. Like Chloé dresses. It’s kind of dressed-up, but then you’re dressing it down in a way. Honestly, I wear sneakers with everything. Any time you’ll see me out, I’m wearing sneakers, it’s just so much more comfortable. I also do like combat boots. I think they’re especially good for the winters and falls; there are so many cute pairs that you can get, even from Steve Madden or any designer I think nowadays. Louis Vuitton though! They make combat boots, which are so cute.”

The best way to go about picking out an outfit is thinking ahead:

“Usually, I’ll just go in my closet, look at different shirts [and] pants I have, and then just kind of go from there. I don’t think about it the night before. I don’t plan it. It’s just when I wake up, I go in my closet, and I’m like, ‘Hm. This looks cute together,’ so then I’ll put it together. What I should do is pick out outfits the night before. Spend time with it! Actually be creative with the outfits. Don’t just rush it because in the morning, sometimes it’s not enough time.”

But you should always dress for yourself and no one else:

“Not everyone is going to like what you do at the end of the day—not a lot of people. People will hate on you. Some people will give you so much support too, but I just look at the positive and look at how many supporters I have rather than haters. Even if it’s on social media—that’s why there’s a block button! That’s why you can disable your comments. Don’t beat back, because that’s what they want, and they would never say that stuff to your face. Obviously, they’re jealous of you somehow, so just try to be proud of yourself and be like, ‘OK. Obviously I’m achieving something.’”

When you do think of other people, make sure they’re only adding positivity:

“I just feel to be confident in yourself is to surround yourself with positive people, people that uplift you and are only here for what you do and love what you do. That’s what I had to learn over the years. That’s something that I definitely take into consideration, and now I see [only] friends that support me.”

And at the end of the day, just do you:

Skai is wearing all Skai x Nowadays available at Macy's.