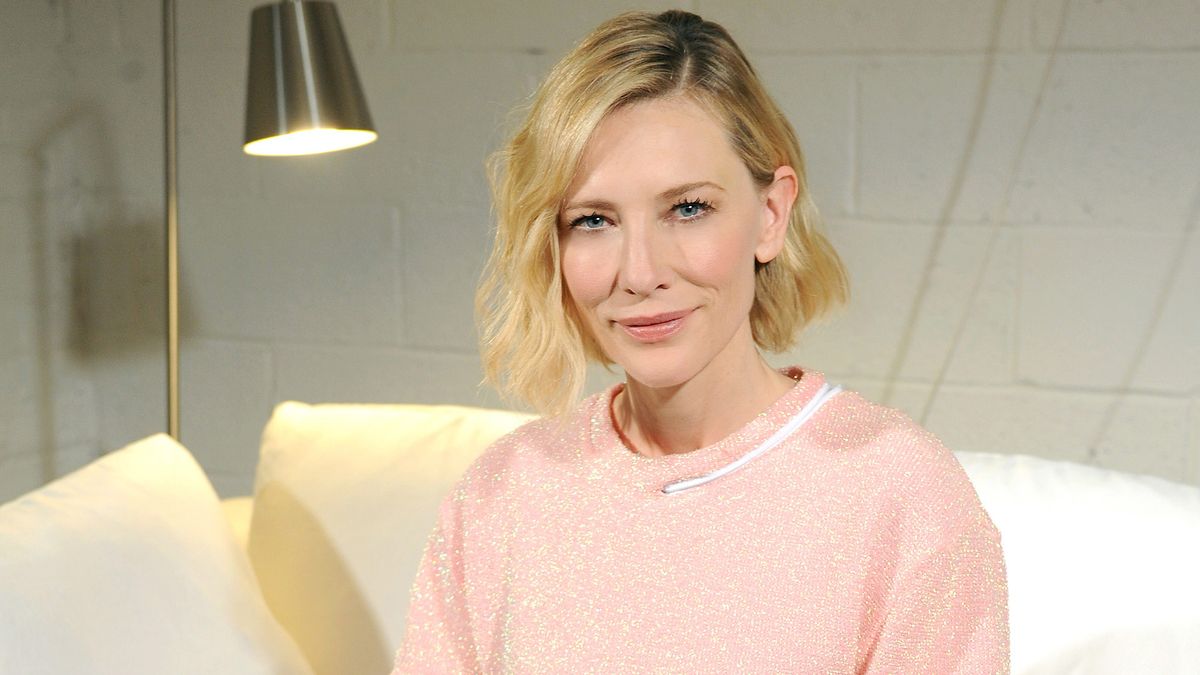 She sure showed them. We spoke to the actress about aging, being typecast, and why she won’t walk the red carpet makeup-free (yet).

I’ll be honest: I really thought I “knew” Cate Blanchett, even before meeting her. To me, she was a very serious actress, with very serious roles under her belt: Elizabeth I in Elizabeth, Carol Aird in Carol, even the evil stepmother in Cinderella. Her style was flawless, her face (as confirmed by other editors) was poreless, and her blond bob has been my ultimate hair envy for years.

That’s exactly why I was so surprised when, after nervously complimenting her pink Christopher Kane dress at an SK-II event, Blanchett turned to me, laughed, and suggested not coming near her with an open flame—the dress’s material could easily catch on fire.

“Whoa,” I thought to myself. “Cate Blanchett’s got jokes.”

Later, while sitting together on a white couch in a private room (after she sarcastically told me, “Nice to see you again!”), I realized just how wrong I’d been about her. Sure, Blanchett was well-spoken and beautiful, and no one can deny her talent. But she was also silly and honest, sharing stories about her career (she was basically told she had a shelf life), describing her beauty routine as “lazy” (aka why she loves SK-II), and admitting to biting her nails (OK, same).

I left the interview weirdly feeling like I’d met someone I could be friends with, not just the megastar I’d seen on-screen. Read our fun conversation—jokes, curse words, and all—ahead.

I love these limited-edition SK-II bottles and how they include inspirational sayings. Do you have a positive mantra you live by?

“Well, I really warm to this idea from SK-II about the notion of change and embracing change. As women, we are indoctrinated to be terrified of the changes that go on in our bodies and in our physical selves. For me, I’ve thought about and embraced those changes so much more because I felt like I’m just working with what I’ve got, doing the best I can as I go along, aging as we are all aging. It’s the evolution of it. I think it’s really, really positive.”

I actually wanted to talk about that, because I feel like there’s such an obsession with looking youthful. What are your thoughts on aging?

“It’s acceptance, it’s embracing it. I wonder if it’s an obsession with looking youthful or trying to look other than what we are. The people who I think are truly beautiful are the people who are outward-looking, they’re engaged in the world, they’re not loathing themselves. I feel like women are pedaled self-hatred a lot of the time, so that’s why these messages are really positive. It’s saying embrace the change, and you can decide what you do. You’re in control of this journey. Or you can be.”

Have you had habits that you’ve tried to change that you’re conscious of? For example, I don’t take criticism well:

“Culturally, failure is kind of taboo, so it also means we’re risk-averse. So if you feel like someone is giving you a piece of criticism, rather than taking it constructively, you sort of think, ‘Oh I’ve failed, I fucked up.’ But it’s an essential, an inevitable part of being alive. In a way, I feel lucky to have happened upon the career I’ve got because it’s pretty brutal. It’s very public. The failures are very public and I think probably, like what you’re saying, I had a much thinner skin when I was in my teens and 20s. I’ve learned to love direction, and I think initially I would take that as like, I’m not doing it right. Whereas now I say, ‘Yeah, I’ll try it like this, and if you think it’s wrong, you give me some ideas,’ and it’s a conversation. It’s a process of auditioning and being rejected and picking yourself up and keeping going. And also biting my nails. I think I finally kicked that habit.”

“Well, you should see them ordinarily. I’ve started taking these vitamins for my skin because someone said it’s really good—because I wasn’t taking a consistent multivitamin. The byproduct is my nails are strong! It’s funny, when you start making a positive step towards something, it encourages you to keep going. The one called ‘Thera-M’ is the one that I’ve been using.”

Do you think it’s an anxiety thing or just a habit?

“I don’t feel particularly anxious, to tell you the truth. I just think it’s a stupid habit. It’s better that than smoking, I guess.”

Is there a beauty look that you think doesn’t work for you?

“Orange hair. I did that. I wouldn’t do that again. Hmm, I’m sure there are many. It’s interesting that you ask that because I’m so used to playing lots of different characters. Facial hair probably doesn’t work [laughs]. Hairy moles—I don’t think they work that well. I don’t know, I like the idea of trying different looks out. In the end I’m not that concerned with whether people like them, it’s more about just trying stuff. In my everyday life, I’m very minimal, mostly because I’m lazy. That’s why SK-II works for me, because it’s just so simple. You’ve got the Essence and you’ve got the serum and you’ve got the ‘LXP’ cream and the eye cream. Then, if I’m on the plane, I put a mask on. If I’m in the Arctic, I’ll take the oil and the oil cleanser. It’s sort of set for me and I don’t have to think about it.”

Is there something in your health routine that has changed since you were younger?

“I got fit, I mean properly fit, for the first time. My job is very physical. I’m doing a lot of theater; you stretch every day, and the job is incredibly physical. And running after children is physical. I got properly fit with Chris Hemsworth’s trainer, [Luke] Zocchi, last year for this Marvel film [Thor: Ragnarok] . I thought, ‘I really want to stick to this,’ and of course as life tramples on, it’s been sporadic, but I really want to get back to that place. It’s actually easier to do a little bit every day. And there’s so many apps now and the thing is, I’m like everybody—it’s so hard to start. But once you start doing a little bit, like walking to work, it actually gives you more energy, so that’s what I want to change.”

What kind of workouts do you do?

“It was hideous. It was horrendous. It was a hard-core cardio-and-weights circuit, but it only lasted 20 minutes because he had to fit it in between scenes. But it was great, I actually wanted to get up at 6 in the morning and work with him for 20 minutes before the kids woke up, if you can believe it. It sounds bizarre. I’m not doing that at the moment, but I really do want to get back to it.”

In the industry, do you feel people try to say you can’t play certain roles?

“I suppose the role that I played that opened up having a career internationally for me was Elizabeth I. After that, I was given the opportunity to take roles, leading roles, in films that were basically the same character in different time periods, and I didn’t do it. Maybe my paycheck wasn’t as big, but I thought, I just want to do what interests me. So I took little roles that other actresses turned down, frankly. I think I unwittingly created a space for myself where I wasn’t pigeonholed as quickly. I thought to myself at the time that I was moving into the film industry quite late, actually—in my mid-twenties. Everyone was saying, ‘You really only get 5 years. By the time you’re 32, your career is over as a woman.’ But I came from the theater. I mean, it was frustrating, that prediction, but I thought, ‘I’m just going to go into the theater and I’m going to go back. You can be anything onstage.’ So I feel like I created a bit of a space to explore and not get locked into things.”

Would you rather fall asleep with your makeup on or walk the red carpet without any makeup?

“Well, I’ve been on screen without any makeup on. You know what? I would be totally fine about walking down the red carpet without any makeup if everyone didn’t have their telephoto lenses looking for faults. The thing is, the red carpet is a gladiatorial sport for women. There was one moment at the Golden Globes when they wanted me to stick my hand into a mani-pedi cam. It’s like, are you fucking kidding me?! Are you really that micro in your assessment? I’m here because I’m nominated for my work, you know what I mean? I’d be totally fine if there was an agreement where you could say, ‘Wow, she looks great with no makeup.’ It’s the scrutiny, women want an armature. So yes, at the moment, I would rather fall asleep with no makeup on.”