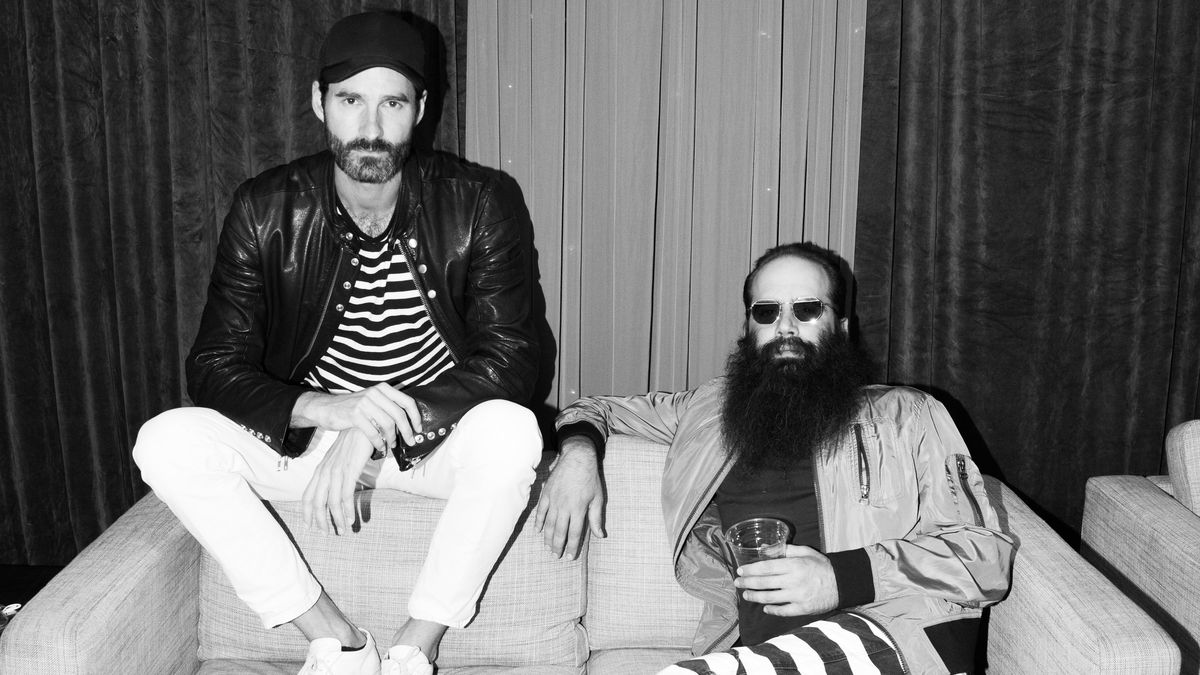 They also have the best rider—wine, whiskey, and hummus included.

We’ll bet money that you’re familiar with the following lyrics: “I can lift you up. I can show you what you want to see and take you where you wanna be.” You know, the opening lyrics of Capital Cities’ hit single “Safe and Sound”? (Sorry, not sorry for getting it stuck in your head for the rest of the day.) Ryan Merchant and Sebu Simonian are the two musicians we have to thank for this catchy tune. The L.A.-based duo formed Capital Cities in 2010, and after releasing their first debut album back in 2013 (which included the single “Safe and Sound”), spent the following three years releasing music videos, getting nominated for a Grammy, and joining Katy Perry on her Prismatic World Tour. Fast-forward to July of this year, and Capital Cities released a new EP, Swimming Pool Summer (spoiler: OG Rick Ross has a feature on it). We caught up with the talented duo a few weeks back at the Life Is Beautiful Festival, and while they sipped on red wine and whiskey, we hit them with a few quick questions around their tour rider, working with Rick Ross, and who would be their dream collaborator.

Got a pre-show ritual?

Ryan Merchant: “We do a little like hand-in-the-middle group get-together. I guess that’s our only ritual that we do.”

Anything interesting on your rider?

How was working with Rick Ross?

SS: “We did it all over the Internet. He actually wrote us a song called ‘Girl Friday,’ and it just felt a little incomplete. We had been in touch for years before this just because we appreciated each other…”

RM: “Rick wanted to sign us. Which is totally random.”

SS: “He was a fan when we were first getting started, but it didn’t work out unfortunately. But we kept in touch, and this song [‘Girl Friday’] was kind of a demo. It was sent to him, and he just liked it, so he recorded a verse over it and sent it back. We never even saw him in the studio.”

Is it tough to work with someone remotely versus in the studio?

RM: “Sometimes it’s really good to be sitting down with someone, making real time decisions as opposed to working remotely. But on our first album with André 3000, he’s super busy, so we had to work remotely. He killed it though. He’s one of those people who just sends you something, and you’re like, ‘That’s amazing.’ We don’t really have to question it too much.”

What have been the most pinch-me moments of your careers?

SS: “When we first started playing the bigger festivals. It was a big milestone for us.”

RM: “Yeah, like the first time we played Coachella.”

SS: “I particularly remember going to the Lollapaloozas in South America. It was right after my first child was born, so it was during a very interesting transition in my life already, and it was our return to the road with these big festivals. That was a very surreal feeling because there were so many people in the audience. I didn’t expect that much enthusiasm at that stage in our careers.”

Favorite cities to perform in?

SS: “That’s a tough one. We’ve just had way too many good ones. We’ve had good shows and bad shows in the same city. In the beginning, for example, Lima was our hometown kind of because they were the first ones to give us support. We went there and played shows when we were just barely getting started—it was an amazing time. Then we went back years later, and we happened to have not such a great show. For whatever reason, sometimes the planets need to align. There’s a lot of factors. I guess Lima has a little soft spot in our lives.”

RM: “South America in general. South America, Mexico. It’s been very good to Capital Cities, so that’s one of my favorite regions to play in.”

Who is your dream collaborator?

RM: “Daft Punk would be a fun group to collaborate with—have them produce at [our studio] Capital City. I know they just produced a song called ‘Overnight’ for an Australian band called Parcels and did a little one-off production for them. It’d be fun one day if they were like, ‘Hey, we want to produce one of your songs.’ Just to learn from them.”

RM: “Getting out in nature. [In] the summer I did a lot of traveling into various national parks, and I went to Oregon and did some mountain biking. I was in Colorado and did a road trip in Montana. I [like] going into nature and being in very majestic outdoor places, because it’s very inspiring. It gets rid of all of the bullshit [and] humbles you, I guess.”

RM: “We’re trying to finish up a couple of songs so that we can complete our album. We want to put out a full-length album.”

Music
More From the series Living