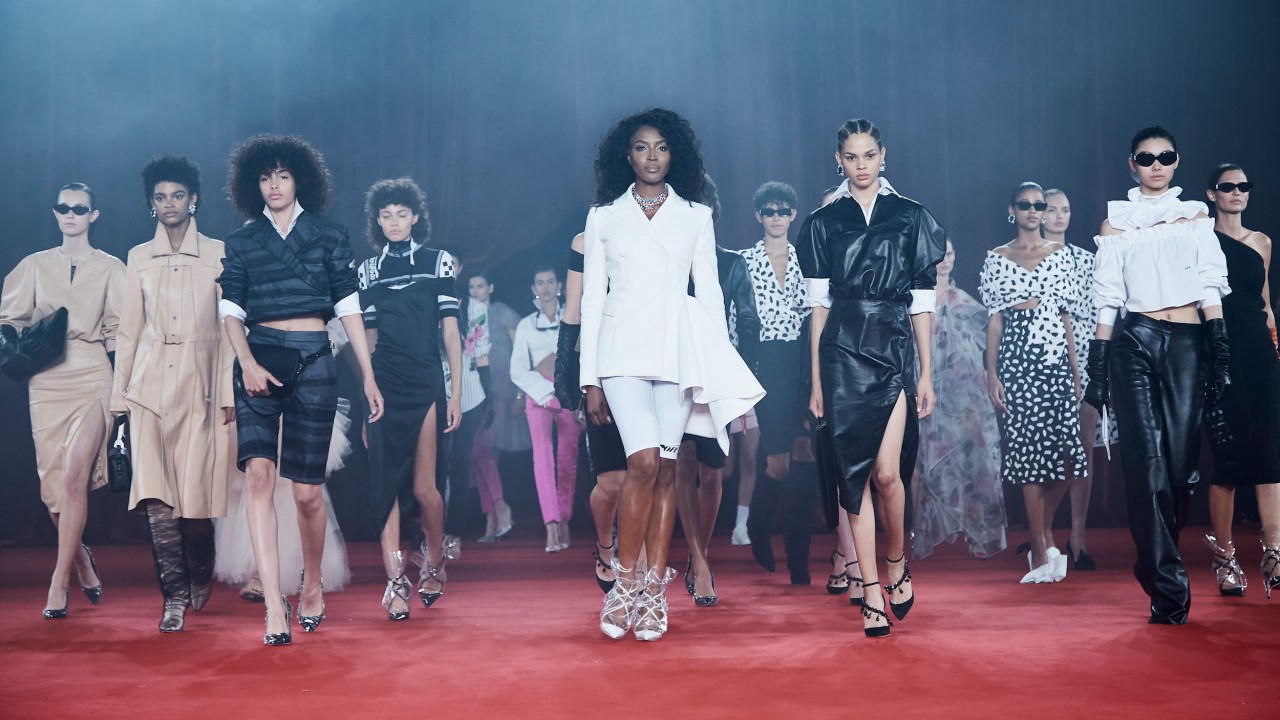 For spring/summer 2018, Virgil Abloh took his streetwear label Off-White in a new direction inspired by Princess Diana. This year marks the 20th anniversary since her death and Abloh paid homage to her with a collection that drew on Diana’s on and off duty looks cleverly reimagined through the Off-White lens.

Abloh riffed on several of Diana’s evening wear, including the deep navy off-the-shoulder gown she wore when dancing with John Travolta at the White House gala dinner in 1985. Abloh cropped the floor-grazing gown into a tiny top and paired it demure shorts that hit just above the knee. Another homage was to the Christina Stambolian off-the-shoulder “revenge dress” from the 1994 Vanity Fair party, which Abloh elongated and added a sexy slit and zippered mock neck for a modern twist.

Diana was also keen on pastel skirt suits, which she wore throughout her tenure as the Princess of Wales. The Off-White collection included several iterations in baby pink and light blue. The jackets grazed the buttocks and featured a row of matching buttons going down the center with a matching mini skirt. Models wore them paired with white trainers and tube socks, a nod to the more athletic side of the late princess, while holding their Jimmy Choo heels wrapped in plastic.

Also included were high-waisted denim worn with a cropped khaki jacket with exaggerated shoulders modeled by Kaia Gerber, who wasn’t even born when Diana died. There were several denim pieces that featured a ruched tulle overlay, which was echoed also in the boots, and floral ensembles including a double-breasted jacket worn over a popped collar shirt, and long floral slip dresses with matching padded boots. Many of the pointed boots were covered in clear ruched plastic, a theme that was seen throughout most of the footwear in the show, from a pump to a sandal.

Abloh gave nod to Diana’s life in the public with clutches that bore the names of publications that ran pieces on her throughout her life including Time, People and the British tabloid The Sun.

Supermodel Naomi Campbell closed the show in an all-white ensemble that juxtaposed Diana’s public life with her personal downtime, wearing a satin double-breasted jacket with flounced detailing off one hip atop a pair of white lyrca cycling shorts.

Click through to see details of the collection, and read about the beauty look.

“It’s a play on skin,” said lead makeup artist Fara Homidi. “Virgil (Abloh) wanted something a little multi-dimensional so the skin is really beautiful, dewy and some of the girls have a psychedelic iridescence on certain high points of their faces.”

“It’s natural, youthful and fresh,” she said of the makeup.

“We’re pressing in a creamy shimmer on the eyes.”

“I mixed a few things like an iridescent powder to put all over their skin on different places like the cheekbones, down the bridge of the nose and right above the lips.”

“Not all of the girls have the iridescent but if they do, it’s all in the same places. We’re going by personality—person to person but everyone has the shimmery eye.”