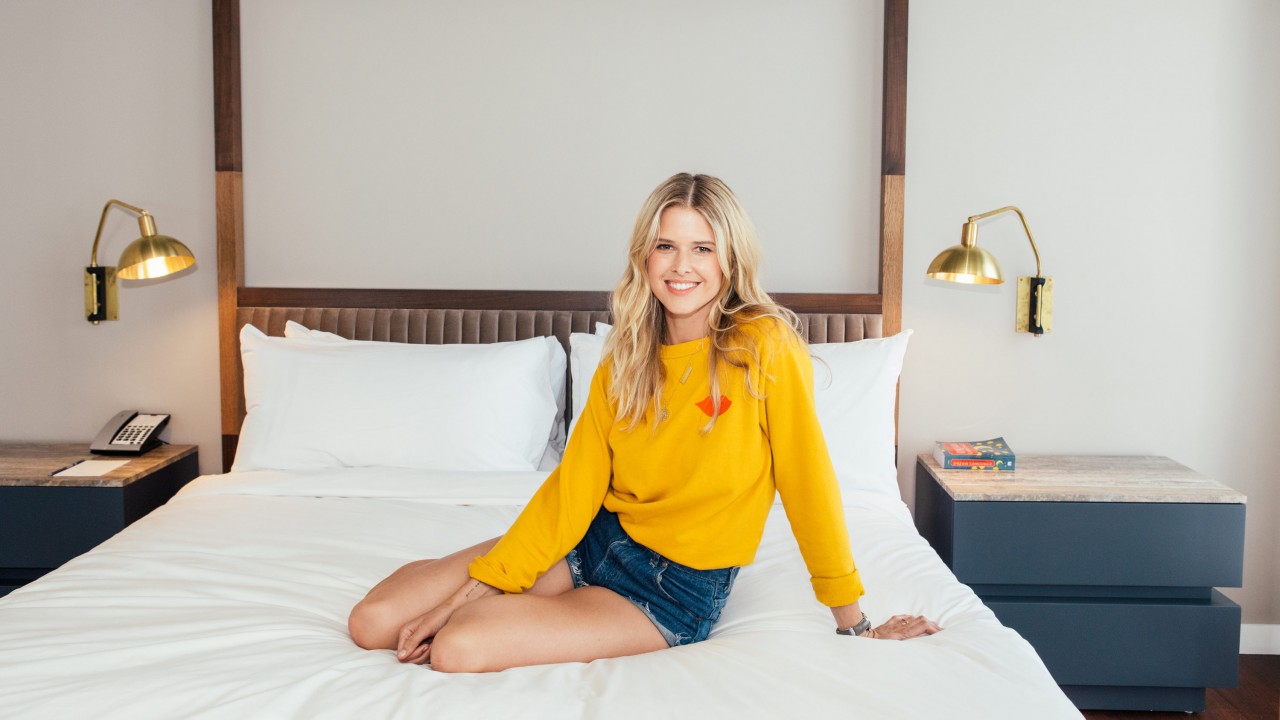 Sarah Wright Olsen did a little of both on the set of American Made.

When Tom Cruise is linked to a movie, there’s a long list of things we’ve learned to expect. Tons of action, for one; something with a plane; and a pretty badass co-star who can hold their own beside him. For American Made, that role went to Sarah Wright Olsen, whom you likely recognize from shows like Marry Me, Parks and Recreation, and the good ol’ aughts favorite 7th Heaven. In this film, she plays the wife of Barry Seal—aka a real-life pilot, CIA agent, and drug runner. But Sarah’s *way* more than just the actress who gets to make out with Cruise this time around…on a plane…in zero gravity. We met up with her at the The Jeremy in West Hollywood to talk about life, her site—Your Zen Mama, and the full-blown workout trailer that was apparently on-set. 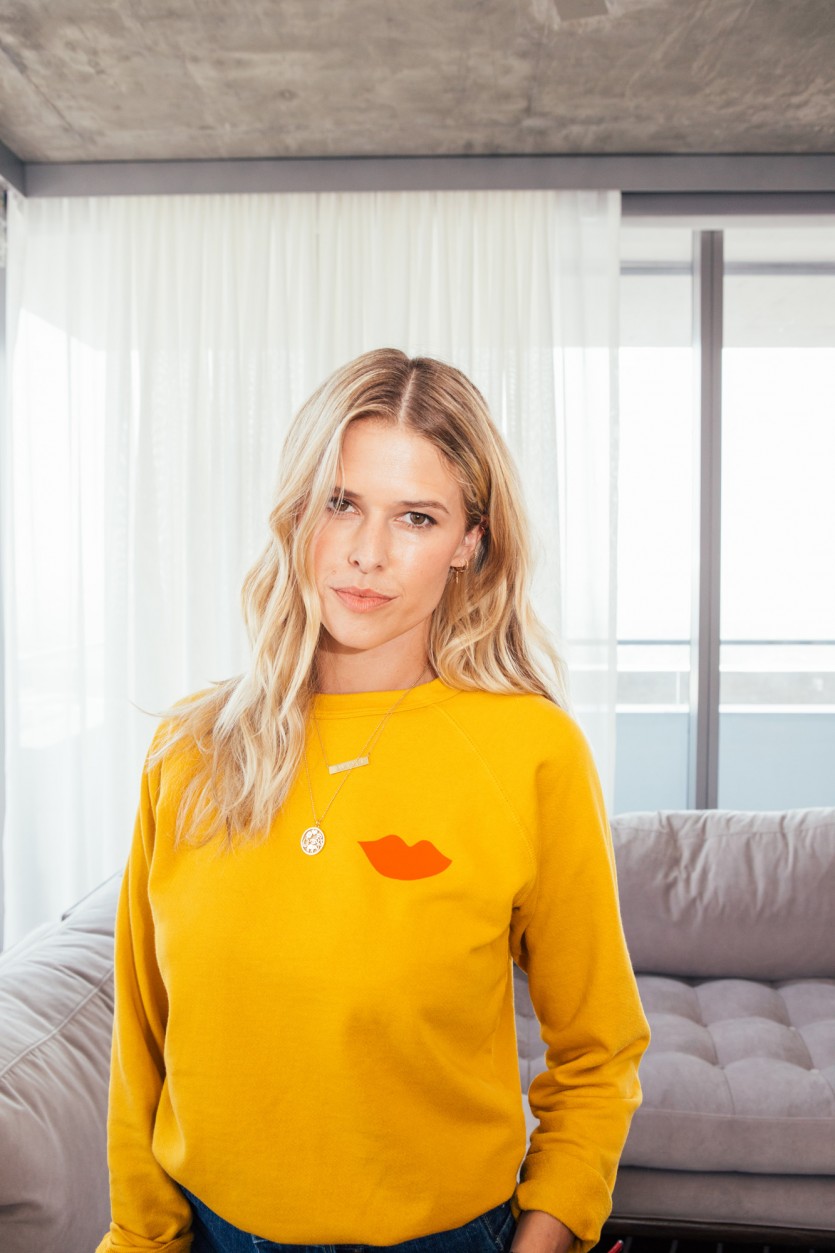 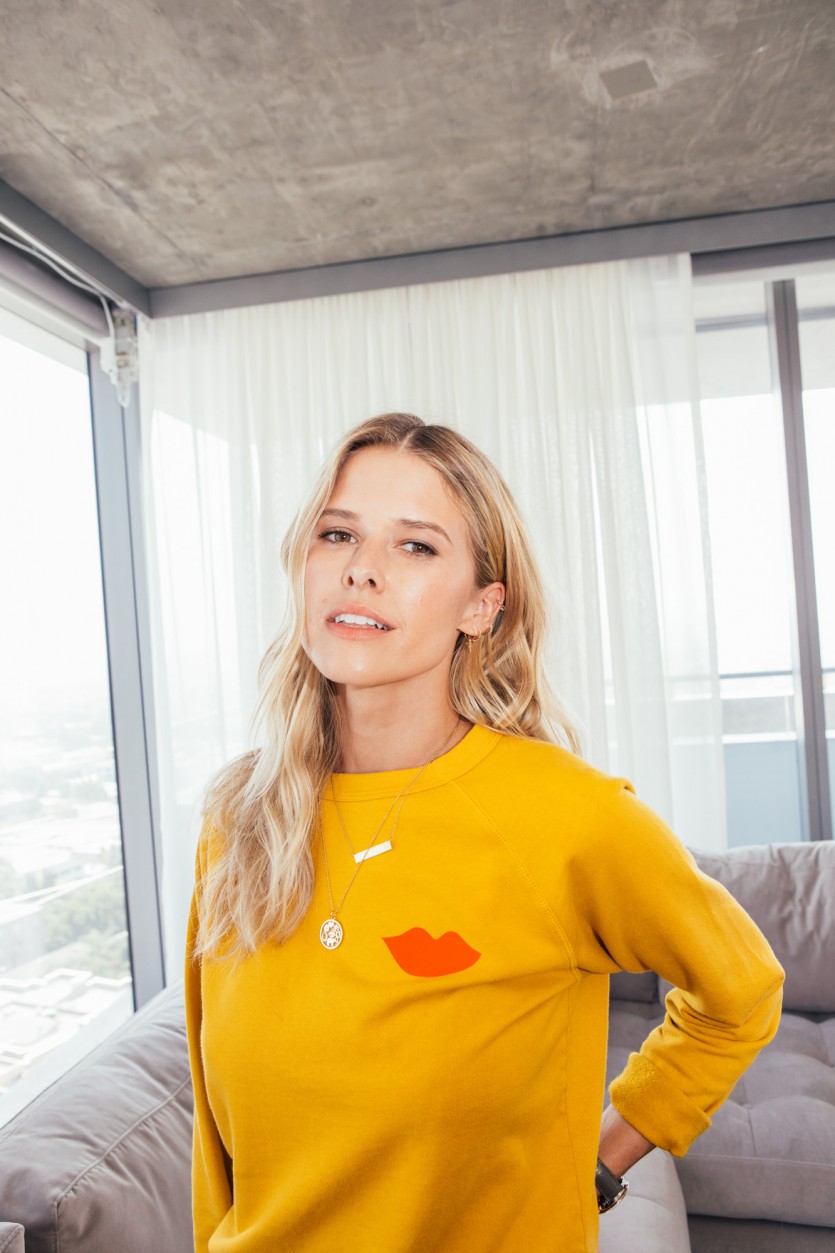 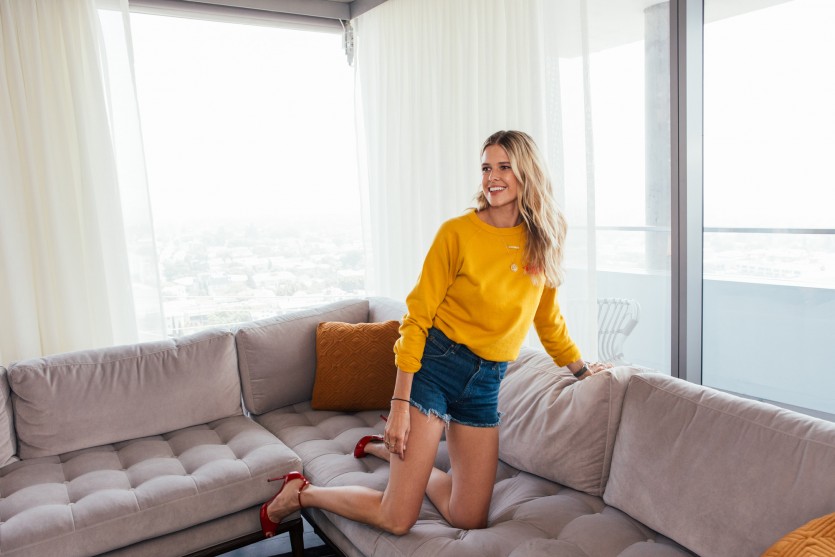 “He’s so funny and warm, and just very inclusive. He’s great at making everyone feel really comfortable, and has that sort of Southern guy mentality where he’s always taking care of everyone. Like, ‘Oh, do you need anything?’ ‘Can I help you with this?’ ‘Is everybody staying?’ He really is like what you hope that he’s like. The first time that I met him, I pulled up to the building where we were doing the audition, and he was standing outside the building. I thought I was going to have a minute to like, go to the bathroom, make sure there wasn’t a booger in my nose, or something. We pulled up [and he’s] standing outside with those Ray-Ban sunglasses on, and it was just like, ‘Oh my gosh. Are you serious right now?’ So I get out of the car and walk over, and he shakes my hand. He was like, ‘[Let’s] just stand outside and talk for a minute, get to know each other,’ and I was like, ‘Ok. Whatever you want to do. I love it!’ He wanted me to feel very comfortable.” 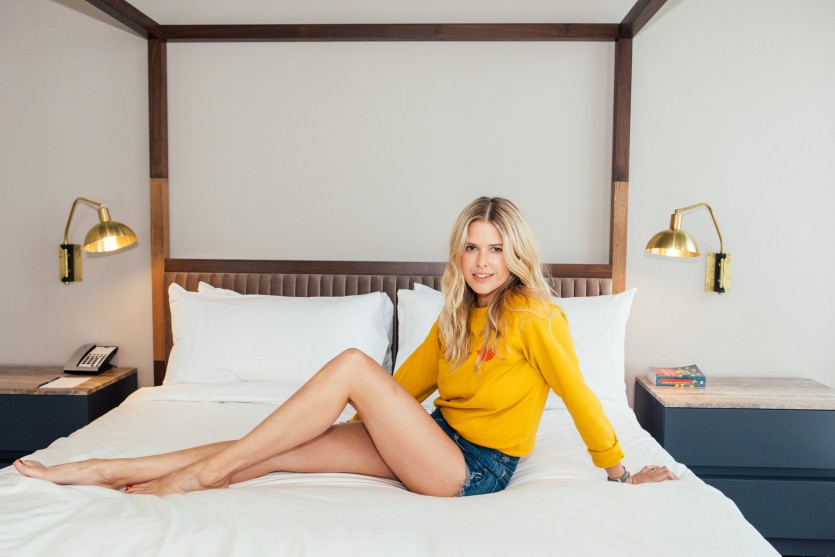 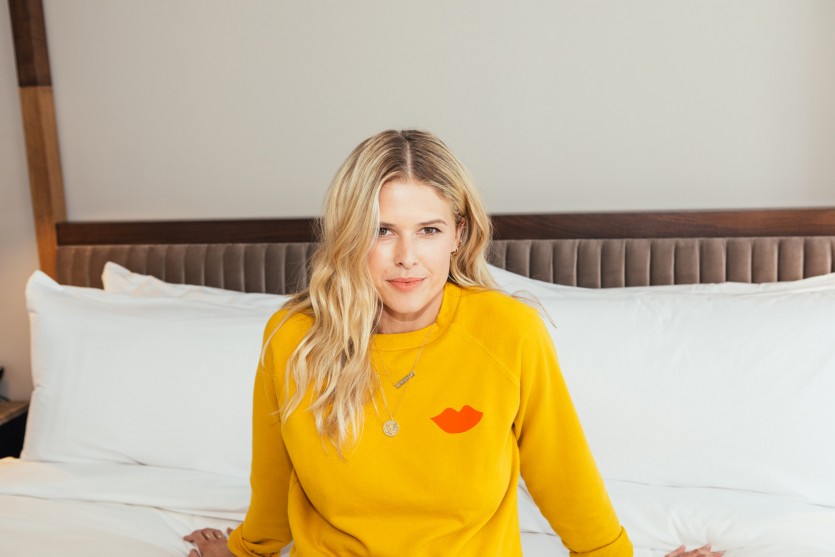 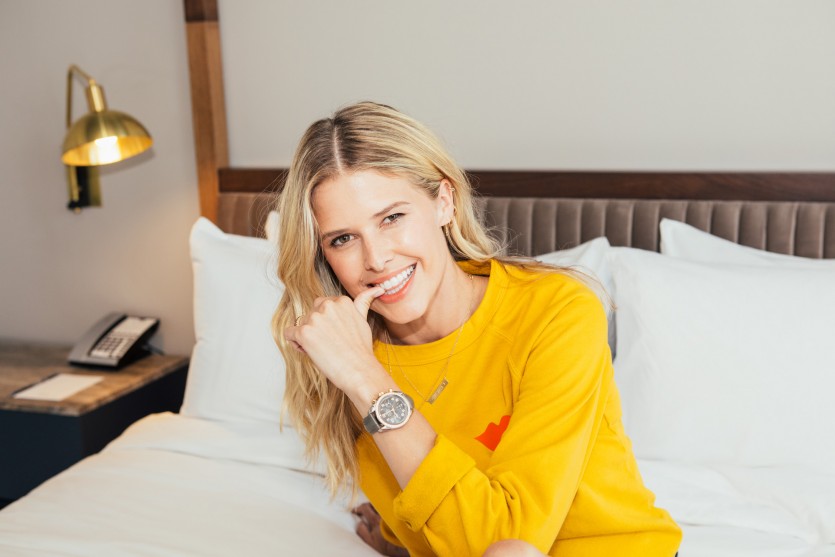 On top of being an actress, you have a website called Your Zen Mama. Can you tell me a little about that?

“My girlfriend Teresa Palmer and I started this site a year ago. We had been sort of talking about creating this village mentality online for a long time. There’s a lot of information out there, but we really felt like it was difficult to find the information that we were interested in. Like what’s the more natural, sort of conscious way of parenting, and is there one space for that? Can we all talk about it? So we created Your Zen Mama as this sort of open forum where women can write to us and write articles based on what’s happening in their lives. Doctors, doulas, dads, moms, caregivers alike, they all write stories. So you can learn a lot. Teresa and I are both really open, and we love [getting] information from so many different aspects. So if somebody has a way that something works for them, it might work for you, but it may not work for me—but I want to try it. We wanted to create a space that’s very loving and comes from a place of lifting each other up. We were so sick of seeing other people put each other down. There’s enough of that in our world right now, right? So we’d love to have a space where it’s a safe zone.” 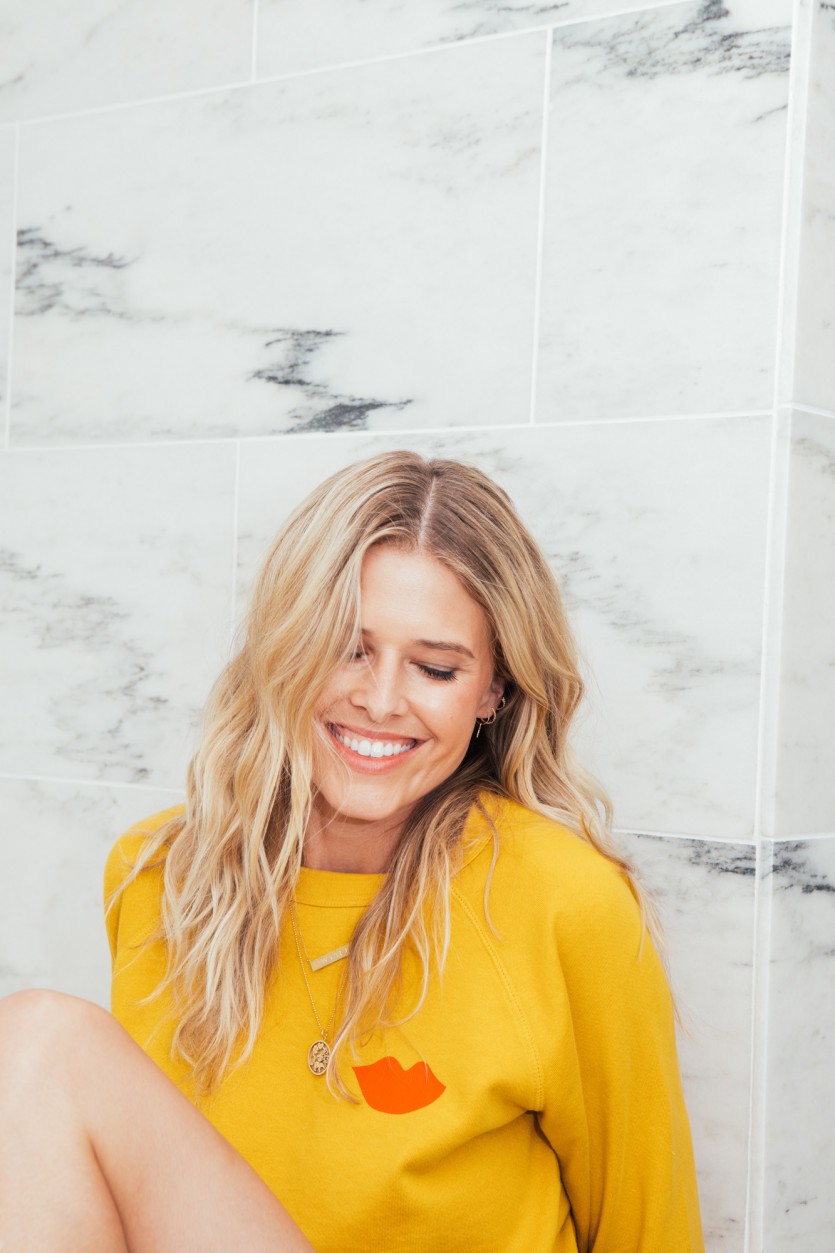 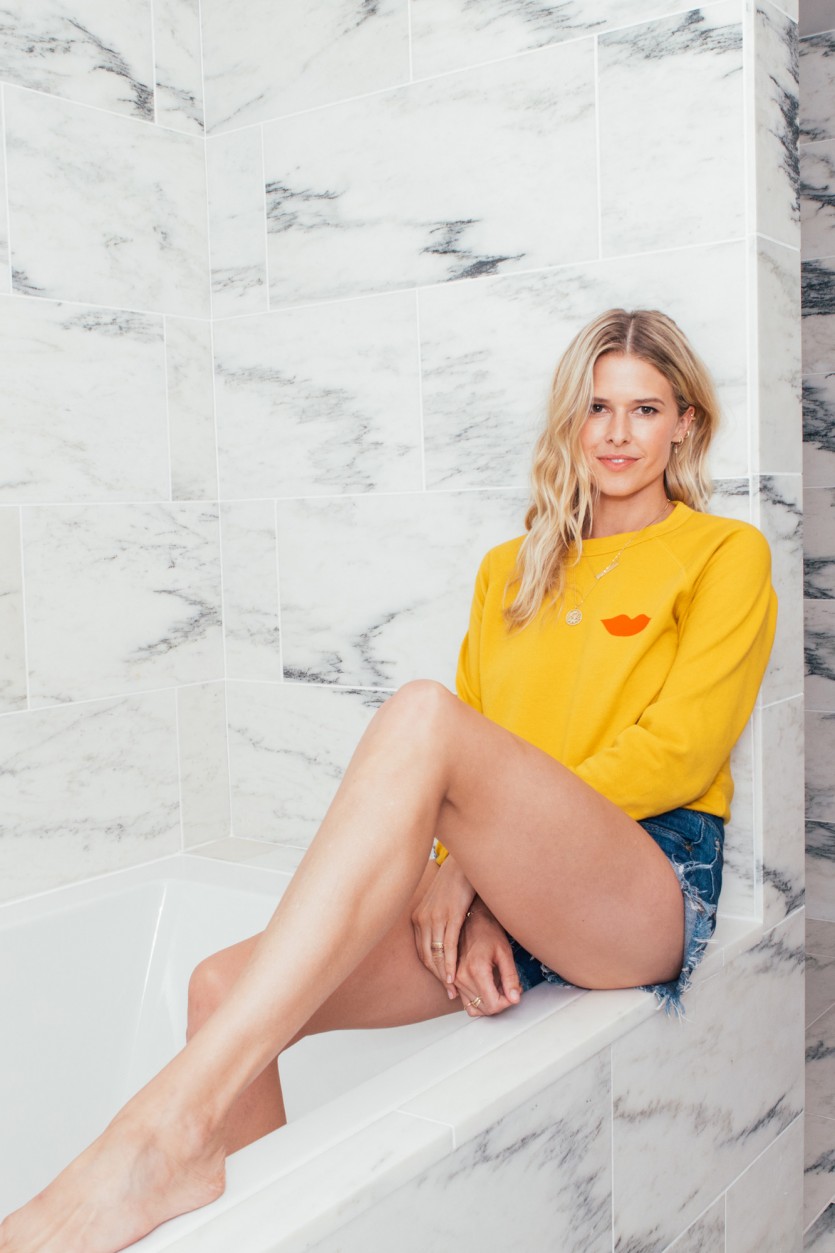 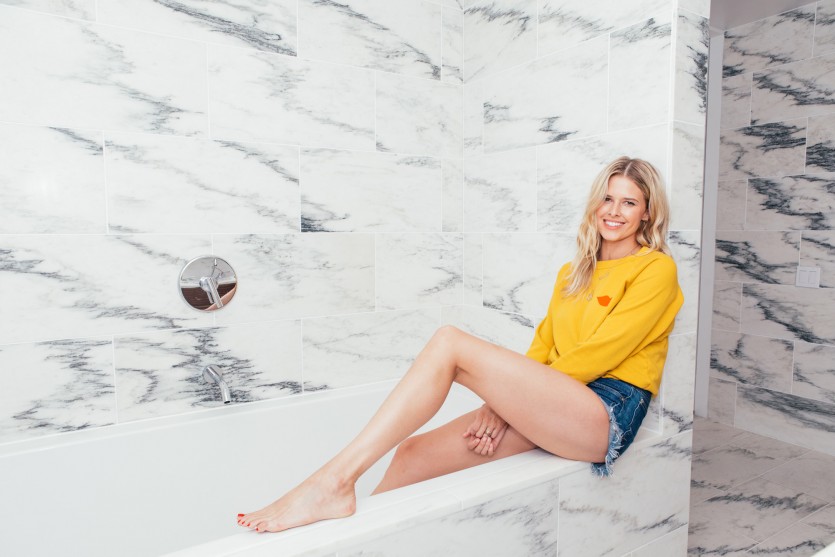 We also know you’re big into fitness. What kind of workouts do you do?

“I’m a breastfeeding mom, so I spend a lot of time sort of bent over. For me, yoga and pilates work so well. They’re such great openers for the body and chest and spine alignment. Pretty much what I have time for is to go online and do something called Bodylove Pilates. When we were shooting American Made, I would take yoga classes here and there, and Tom also had a full trailer that’s been transformed into a gym. He has something called The Challenge and does these little workouts every morning for the crew. He would have all of us come into the trailer, and we would challenge each other. Whatever the trainer had put together, like 5-10 workouts, every single person—sometimes there’d be 20 of us in there—we’d be going through them together, and he’d be counting them out. Jumping jacks, holding planks for a full minute, it was a bunch of high intensity. But it gets your blood pumping and you’re definitely sweating. Even the hair and makeup girl in her skirt was having to bring pants every single morning because she knows Tom’s going to make her get into the workout trailer. Half the time I’d be in there, my makeup wasn’t done yet, and I’d have like half of my head in rollers because my call time was earlier. He was like, ‘You’re doing the Challenge today?’ I was like, ‘Ok, yes,’ and we’d all run in, halfway through the process, and then run back to the hair and makeup trailer.”

Your husband is also actor Eric Christian Olsen, whom you met on the set of The Loop. Would you ever work together again?

“I always want to. He’s been on [NCIS: Los Angeles] for eight years, but I think the two of us, we have to do a film or [something] in the future. He’s amazing at comedy. I love working beside him and doing comedy—I cannot stop laughing. That’s part of the reason why I fell in love with him. Making The Loop, I just could not keep it together. Half the time I had to bury my face in a coffee cup in a scene. It’s really a fun environment to get along with the people that you’re working with. It didn’t hurt that I was like, falling for him at the same time [laughs].”