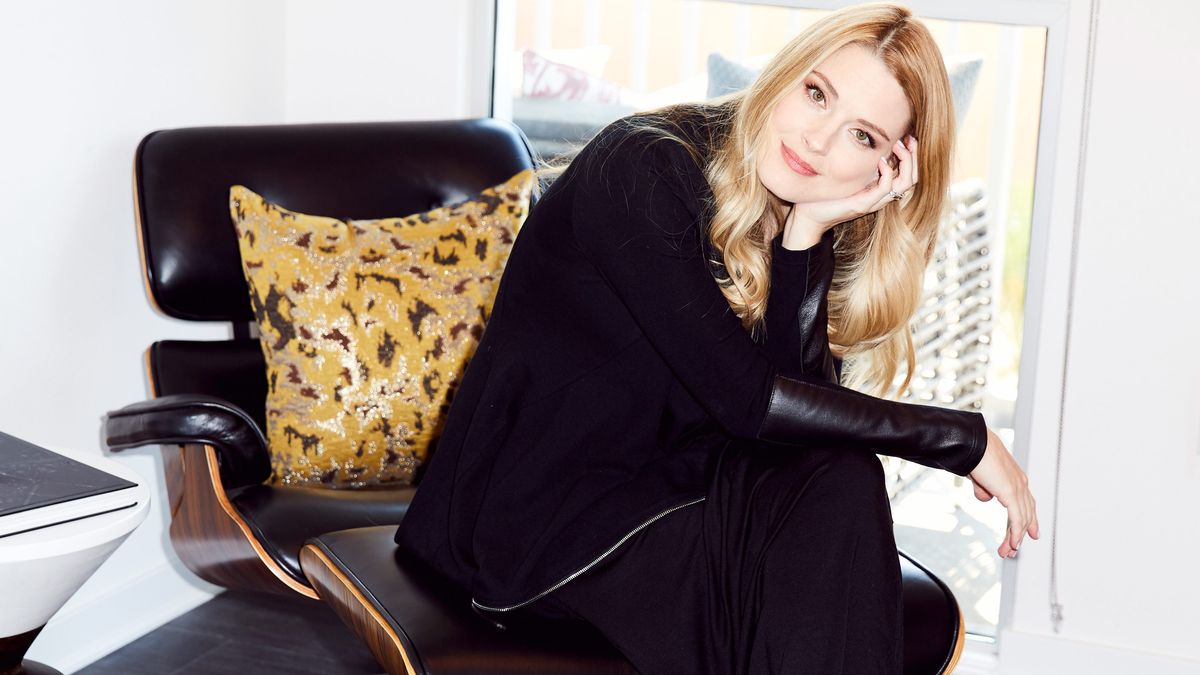 Bad (or great?) news for watchers.

It won’t take long to recognize Alexandra Breckenridge as *that actress*—aka the one who’s appeared on all your favorite shows. She famously wore a French maid outfit for American Horror Story, fought zombies on The Walking Dead, and these days is otherwise known as Sophie, Kevin’s ex-wife and current girlfriend, on This Is Us.

But despite her résumé of serious roles, Alex—as she called herself during introductions—is pretty darn silly off-screen. For our photo shoot at Domain WeHo, she played around with plastic pears and later admitted to snooping for Christmas gifts and getting starstruck on occasion. Of course, we couldn’t hold back: We asked Alex to spill on season two of NBC’s most tear-jerking show (which she’s been filming while expecting baby number two!), and she told us what she could, including the story line that *really* made her weepy.

So, This Is Us is finally back!

“It’s crazy. It’s like I waited for so long to start shooting this next season, and then filming, it was like I snapped my finger and now we’re at the premiere again.”

Is there anything that you can share about this upcoming season?

“I think it’s pretty obvious from where we left off in the finale that this season, we’re delving into more of Kevin and Sophie’s relationship. They’re, again, going into a relationship that’s long-distance, so I think we’re going to see where that ends up this time around. I don’t know if you’ve ever known anyone to be in a long-distance relationship—it’s not easy. But they do love each other, so they’re going to try to make it work. We’ll see!”

How much are we going to cry this season?

“I cried a couple of times reading the first script. And the second script. We screened the first, second, and third episodes—I actually had to leave before they screened the third one because I had to go relieve my babysitter—but for the first two, everyone was definitely sniffling. And these are all people that work on the show—writers, producers, and actors—and everybody’s crying.”

So you start crying just from the script?

“I think that the show is really good at touching on your heartstrings without ripping them out of your chest. It sort of skirts the line of getting in there and making you be more in touch with your emotions, without overwhelming you to the point where you can’t watch the show anymore because you’re just like, ‘I can’t. I can’t get that sad.’”

I also saw on Instagram that you watch Game of Thrones:

“I love Game of Thrones. I was really upset when I found out that Daenerys was Jon Snow’s aunt. I knew something was gonna happen, but that was just…that was such a bummer.”

“No! I want to be in the moment and be surprised by what happens. I don’t want to know beforehand. I feel like that takes part of it away. But, that being said, I’m the person who will rummage through closets to find out what they’re getting for Christmas. I am 100 percent that person. I’ve been doing that since I was a little girl.”

You also had a baby last year, and now you’re expecting another one:

“We were going to wait four years, but that sometimes doesn’t happen the way that you plan. And that’s totally okay, because, as I’ve heard, siblings that are closer in age tend to have more fun together and become closer. They’ll only be 15 months apart, so it will be great.”

Did you have to film when you were pregnant at all?

“We’re still filming, so I’m pregnant and we’re filming. They have ways of digitizing tummies out of anything now, and they hide with clothing, shoot behind a counter, whatever.”

Who would your dream guest star be on This Is Us?

“I’ve always loved and admired Gary Oldman, but I think I’d be too nervous to work with him. I actually almost ran into him [once]—he was coming out of the grocery store as I was walking in, and my head was down and I literally almost ran into him. I looked up and saw his face and I literally gasped. And then Casey, my husband, and I walked through the grocery store like, ‘Oh my god, that was Gary Oldman. Oh my god!’”