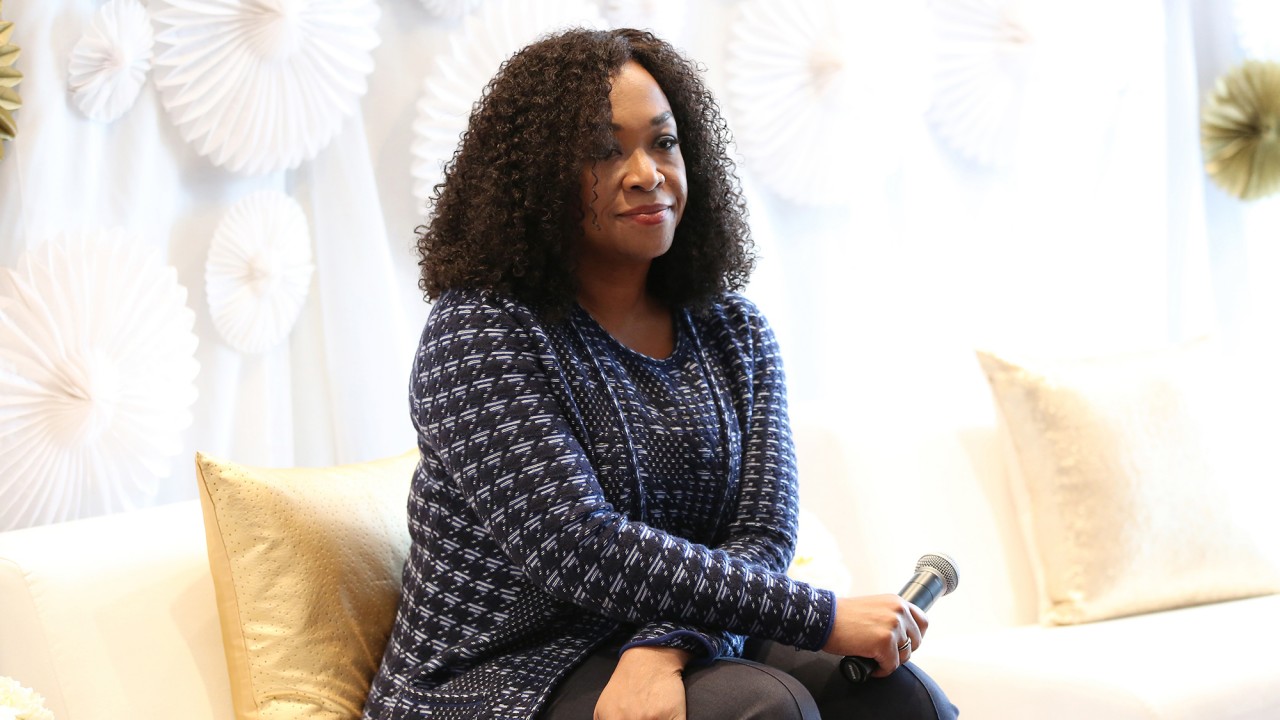 The TV titan actually hates those words—for a good reason.

The thing to note about Shonda Rhimes? She keeps it real, whether it’s through the characters she creates, the books she writes....or when an editor is running *really* late to interview her. As I speedily pulled out my recorder at Dove’s Self-Esteem Workshop—after being stuck in an hour’s worth of horrendous traffic—the self-proclaimed (and, honestly, publicly proclaimed) titan simply reminded me to breathe. It was at that moment that I was truly in awe—even more than I was before.

Despite all of Shonda’s “Shondaland” success, creating hit shows like Scandal and Grey’s Anatomy (and the often forgotten-about but Britney-Spears-centric Crossroads), she’s still shockingly down-to-earth: friendly, caring, and using her fame to help empower other, sometimes overlooked women, especially through her new partnership with Dove. Once I finally caught my breath and was calm and collected? I spoke to Shonda about her involvement with the brand, strong female characters, and why you shouldn’t let age stop you from pursuing your dreams.

People often credit you and Ryan Murphy as the ones who are creating strong female characters on TV. Do you watch any of Ryan’s shows?

“It’s interesting—and I bet you Ryan feels like this, too—there are no ‘weak’ female characters. I feel like I’m writing women as I know them. [Ryan’s] a very good guy, and I think he has that same feeling. I, of course, watch his shows. The OJ series, [The People v. O.J. Simpson: American Crime Story], was probably one of my favorite things I’ve seen in a long time. So for me, he’s writing women that feel like real people. That’s part of what we like to do, and I think that’s part of giving girls and women the images that they can relate to.

“I always say that I don’t like to use the words ‘strong female characters,’ because I feel like female characters get to be everything. I think the problem is, maybe in the past, they’ve been very one-dimensional, but like women, like girls, like all of us, they are fully dimensional in all ways. There’s a beauty in allowing women to see the flaws in other women and embrace [those flaws], move past them, be strong about them, and admit them. I think it’s great for young women to see that in other women, too.”

Are there any words that women should stop using toward other women, or toward themselves?

“I don’t believe that women use those words toward other women. I haven’t really encountered women who are nasty towards other women. But there are a lot of words women shouldn’t be using about themselves, and a lot of words they should be using. It’s like calling yourself beautiful: That’s one of the ideas I thought about with this Dove project that I thought was so interesting. When you ask someone to tell you that they’re beautiful, they have a really hard time doing it. People don’t want to say it, as if they’re embarrassed to admit this thing about themselves that they’re not allowed to admit, because somebody hasn’t designated it for them. The reality of it is, you’re beautiful if you decide you’re beautiful. To me, that’s what’s most important; women should get to designate themselves whatever they think, and there’s no apologizing for it. When I did my TED talk, I said that I was a titan, and everybody was really nervous that I was going to say this word. I was like, ‘I feel I’m a titan. I don’t think there’s anything wrong with saying it.’ But to everybody, it felt like a very a shocking thing to do, and I thought, ‘Why not? Men would do that without question.’ Women should get to own who they are without question. And get to decide what’s beautiful, by the way, instead of men deciding it.”

Do you have a mantra that you repeat to yourself each day?

“What I’m thinking about constantly sort of changes. Right now, I’m saying the universe unfolds exactly as it should. That has to do with motherhood and having a teenage daughter, and watching her make all the teenage daughter decisions and going, ‘The universe unfolds exactly as it should, it’s all going to be fine. She’s going to be a wonderful citizen.’ And also having a four-year-old, who is probably more challenging than a teenage daughter. But I also grew up with my father constantly saying to me, ‘The only limits of your success are your own imagination.’ He said it so much that I can roll that off my tongue as if it’s one word. And I grew up believing it, because he said it so much. So if there’s any mantra I probably took on, it’s that one.”

Oftentimes, age is thought of as a limitation when it comes to achievement. What are your thoughts on that?

Are there certain characters that you think TV needs more of? Or that you’d like to create?