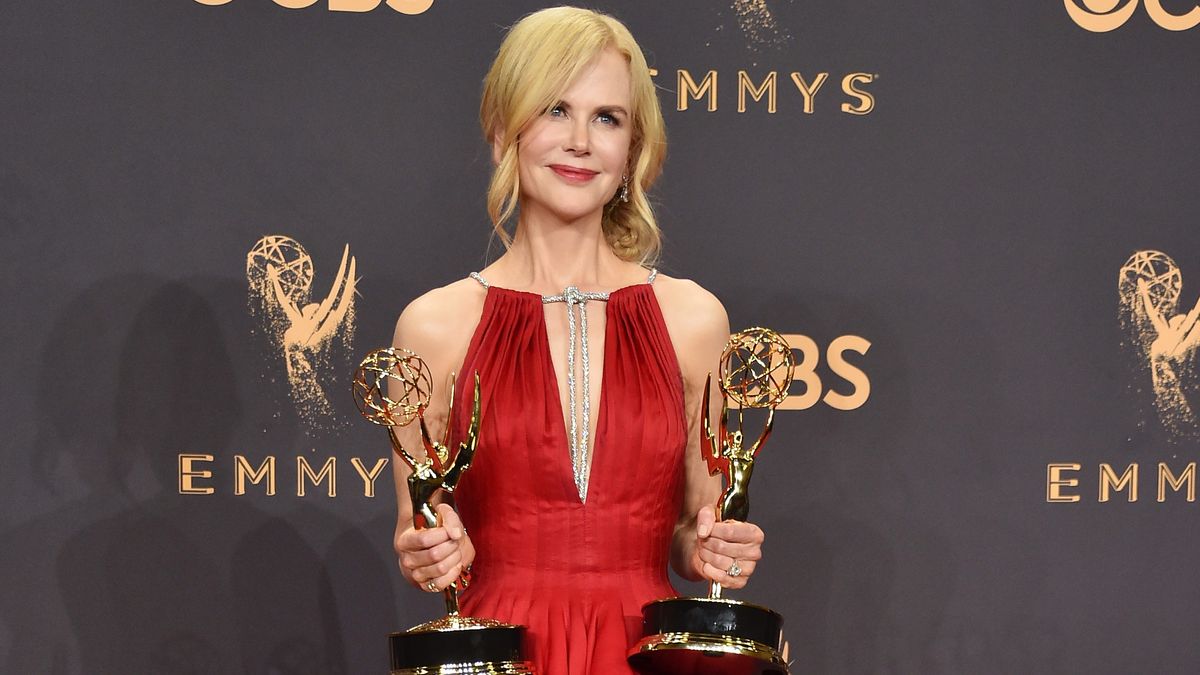 Exclusive: What Nicole Kidman Told Us Right Before Her Big Win

The Emmy-winning actress on her cold shower trick and what went down on set for Big Little Lies.

When we sat down with Nicole Kidman, who was, unknowingly, hours away from being awarded an Emmy for Best Actress in a Limited Series, only one thing was going through our minds: How does she keep her complexion this crazy-radiant at 50? Actually, at any age at all? Trust us, she’s just as flawless up close as she is in film and TV. Fittingly, the Big Little Lies actress—who is now halfway to an EGOT, by the way—was recently named Brand Ambassador for Neutrogena. But best yet, we found, she’s also exceptionally sweet and down-to-earth, with plenty of charming anecdotes about her family to share.

In between bites of fresh salmon sashimi (she’s a major fan of Japanese food), Kidman revealed how her nine-year-old daughter, Sunday, is quickly becoming interested in makeup and even insists on climbing into the chair for her own glamour moment as soon as her movie-star mother has finished her look. Kidman has a few products she’s willing to let her daughter experiment with, including a few lip glosses.

What we were most happy to hear, however, was the inside scoop on her in-flight skincare routine for those 25-hour Australia-to-Nashville plane rides, as well as her pre-awards-show prep for the 2017 Emmy Awards, and how the cast of Big Little Lies enjoyed some quality girl time in between takes.

Her morning routine before an award show:

“I stay relaxed. I’ll try to have the same morning that I always have—I have breakfast with my kids and my husband, and we read the paper. I hang around the house and I’ll go for a run maybe, or I swim. Then I’ll start to get ready because you have to be at the event early. You’re getting ready at noon or 12:30, and then you’re in the car at 2:00. It’s so early. It’s too early. My kids are always like, ‘You’re going now?’ And we’re like, ‘Yeah, off we go!’ [laughs] It’s bizarre.”

How she preps her skin to be on camera:

“The night before, I use the Neutrogena Rapid Wrinkle Regenerating Cream. I just slather that on. In the morning I’ll take a cold, cold shower. I’ve done that for years. That sort of wakes me up. But I really think a lot of the preparation is just taking care of yourself. It’s not a quick fix, you know? I’ll put on a face mask maybe, but my whole thing is if you work out and sweat and use the right creams in your life, then you’ll be fine.”

“I’ll do a run outside—that’s why I use the sunscreen. I’ve always used Neutrogena, and I love the Ultra Sheer Lotion SPF 100+ Sunscreen. It’s the best. It’s like a hidden secret. Or not—we’re trying to get the word out [laughs]. But it’s so good. So I’ll do that, and then that will be it.”

The one product she’ll let her 9-year-old daughter, Sunday, use:

“[My kids] want their hair and makeup done. Actually, when we were getting ready for the Academy Awards earlier this year, my daughter was like, ‘Okay, get out of the seat now because I want to get mine done.’ I’m like, ‘What?’ My makeup artist had to go, ‘Sunday, this is about your mother right now.’ [laughs] She’s nine. That’s why the Neutrogena HydroBoost Lip Glosses are spectacular. They’re really moisturizing, and they’re great for young girls. I’ll let them use that. It’s a good beginner.”

Why music is always on while she’s getting ready for an award show:

“We play music. I’m married to a musician, so he always has files. We drive, and he puts on the playlist. We need to have all the music always. My daughter just did a playlist called Cats and Dogs. I don’t know why, but it’s a great playlist. She made it with her dad.”

The Big Little Lies actresses are genuinely all friends in real life:

“Reese and I shared a trailer [on the Big Little Lies set]. We would talk about the scene; we would rehearse the scene. We’d order Japanese food when we were night shooting. Reese would bring in amazing bento boxes for all of us, and we would be like, ‘Oh my god, you’re amazing.’ We’d put on music. It was seriously fun. That’s why I’d love to do another one, because I love working with her. I love working with all of them. They’re great. Laura shared with Shailene, and then Zoë would come and go. And then there was Alex [laughs].”

How she keeps her skin feeling fresh on those long flights from Australia:

“If it’s to New York or Nashville, it’s about 24 or 25 hours to get there. I drink a lot of water. I want hydration, so I always use the Neutrogena Wrinkle Repair Moisturizer. I’ll probably take the wipes, because they’re so easy, and I’ll take everything off on the plane. [Or] sometimes I’ll get on with no makeup on. The wipes are fantastic, because they travel—you can put them in your handbag. Then I’ll cover with oil sometimes. Any oil I can get, like jojoba, from the Whole Foods store.”

Her family has a lot of opinions on her easy, everyday makeup routine:

“[For everyday makeup], I just use the Neutrogena Ultra Sheer Lotion SPF 100+ Sunscreen, blush, and comb my lashes. Easy. Too easy [laughs]. My daughter says, ‘Wear more makeup,’ my husband says, ‘Wear less makeup.’ What’s a girl to do? [laughs]”