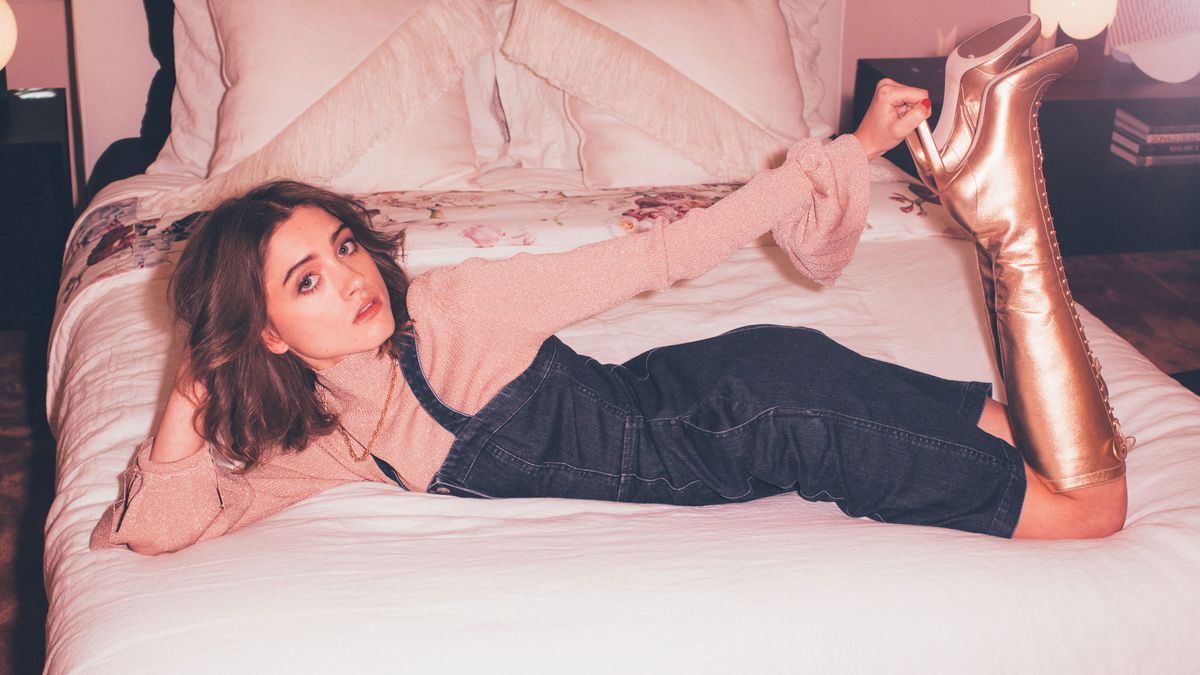 We put the actress, who plays Nancy on the show, in the season’s best retro denim, and got as much intel about Season 2 as we could get. Spoilers ahead (sort of…)!

If you’re part of that small minority who hasn’t seen Stranger Things (*yet*), Natalia Dyer could easily pass as your average New Yorker. The actress, who plays Nancy on the hit Netflix show, is almost eerily chill as she arrives at our office, revealing she just walked here from her apartment and that her adorable gingham pants are actually from Zara. She doesn’t even seem to notice that people are silently freaking out as she walks around, scoping out the place. Coveteur’s crew is clearly made up of big binge-watchers.

But that’s part of what makes Natalia so great: She doesn’t act like the massive star that fans of the show see her as, and instead laughs over her love of Anastasia and willingly endures a game of Heads Up. It also made her the perfect person to play dress-up with, as she modeled our favorite ’70s- and ’80s-inspired denim trends in the most effortlessly cool way.

And about this location: New York gallery/showroom The Future Perfect gamely let us play house in their secret space, which was designed by Leilani Zahn with lighting works and sculptures by her husband, Karl Zahn. All the furniture is De La Espada, and between the pinky-mauve hues, Zahn’s hanging brass sculptures, and that crazy floral print, it was the perfect place to imagine Nancy in an extremely glamorous alternate universe.

Check out the photos ahead, along with our chat about her newfound fame, style, and, of course, the show, which finally returns for season two on Oct. 27.

Do people get angry at you for the whole Barb thing?

“People are like, ‘What about Barb?’ I’m always scared to say it because I’m scared of what the reaction will be. I’m like, ‘She—did you not? She died. You saw it. We showed it very graphically, too.’ It’s really funny, but the funniest thing about it—well, not ha-ha funny—but I think the fan response actually really shaped the second season and Nancy’s plot line. I’m not sure if the brothers or anybody were really aware of Barb’s importance. It was definitely a surprise, but important. In hindsight, you’re like, ‘Yeah, of course!’ And especially for Nancy. A huge part of her story line is losing her best friend.”

“My thing is, I get like, ‘Ooh, it doesn’t look good for Nancy,’ from that perspective. But we all have those moments of being a bad friend. And Nancy had no idea. If she thought, ‘Oh, there are monsters running around out there, maybe I shouldn’t let Barb go home by herself,’ of course she would’ve stopped her. And you know, judgment’s the first thing to go when you’re drinking. But I think that’s why Barb resonated with us; we’ve all—even me, of course—we’ve all been Barb. We’ve all been the friend. And I would like to think that we’ve all kind of been Nancy, or we’re a little selfish here and there and we’re a bad friend, occasionally. It was just really unfortunate timing.”

Part of the reason the show is popular is because of its different and powerful portrayal of females. Is that refreshing for you?

“Definitely. I end up reading for a lot of roles that, on paper, come across like Nancy does on paper—like, 16-year-old, kind of going through some angsty changes, and boys, and a first sexual experience. I don’t think that age is always treated with as much respect. I always try to throw props to the writers, to the brothers, really. It’s great that they haven’t discriminated between the genders, as far as who gets to do badass things and who gets to be emotional. They’re just telling stories with these characters.”

“I think everybody really cares about what they’re doing and making something good, and they genuinely respect what everybody else is bringing to the table. In my mind, that’s part of the magic of making something that is ‘successful’—genuinely wanting to be there and wanting to make something cool together. So yeah, we’re all really close, and I miss them when we’re not hanging out. Also, for the most part, most of us were relatively unknown before this came out, so we all had that crazy experience of ‘Oh my god, this is insane.’ That overnight ‘Oh my gosh, this is crazy. Does this happen to you? Me too!’ It’s nice to have that kind of solidarity in the craziness that can be fame, celebrity kind of a phenomenon.”

Are you recognized on the street? What’s that like?

“It’s really bizarre and it’s really changed my whole perspective of other celebrities. I came across this quote the other day, and it was basically like, ‘Fame is a million people having the wrong idea about you.’ All of a sudden, everybody thinks that they know you, but they forget that people you go up to, they have no idea who you are. Honestly, I feel like I could just go back to school and study that whole sociological thing. One of the most frustrating things has been people coming up—and I get that they’re nervous, sometimes they’re shaking, which is really crazy—but sometimes people run up to you and have their phone all ready, and they’re like, ‘Can I get a picture with you?’ That’s the first thing they say. And I know it’s such a delicate moment for them in a way, but also as a human, you’re kind of like, ‘Who are you?’ If that had happened to me before this came out, I’d be like, ‘No!’ It’s just a weird, strange thing…Stranger Things! [laughs]. You don’t ever want to not be grateful, and it’s nice to be liked because I think as actors, that’s the thing—at the end of the day you want to at least be respected for what you do and what you put out in the world. But sometimes you feel like all they want from you is a picture. They just want the proof that they met you, and you’re like, ‘I’m a human. I’m a person.’ So that’s been something to kind of deal with, I think for all of us. We’ve talked about it on the show. It’s hard, and do you say no? When do you say no? Do you have to say yes? Where do you draw the line? Still figuring all that out I guess. Trying to take it case by case. Kids you can’t really say no to. Kids are too endearing.”

“I’m very much a jeans, t-shirt, tennis shoes, sunscreen, lip balm, just wash-and-go kind of a person. I think there are definitely parts of this business that pressure you to always be put together. Especially when people are constantly like, ‘Can I get a picture with you?’ And you’re like, ‘Oh, man. I look like a twelve-year-old boy right now. Great. Yeah, let’s get a picture.’ I don’t know, I can’t be bothered with it most of the time. But it is fun to do things like this photo shoot and red carpet events, where you feel so glamorous and you feel so girly and that’s nice. But yeah, I have mostly t-shirts in my closet.”

Do you have a favorite denim trend?

“I was just saying I really want to find some high-waisted, flare, bell-bottom stuff. [I like] overalls because they’re really easy. And I have maybe four denim jackets. I’m always for throwing on a denim jacket, honestly. Denim’s great, isn’t it? Somehow it ended up as this ubiquitous material that can go with anything. I’m all about easy. I’m all about casual, easy—denim is definitely a friend of mine. High-waisted, too. It’s funny to think about owning non-high-waisted pants. Everything is high-waisted in my closet. It’s just more flattering! There’s something about it that feels better, it’s more flattering, I’m way into it. It’s my favorite ’80s trend.”

You were talking a little bit about Anastasia and Princess Diaries before. Care to explain?

“I was constantly pretending as a child, and I was constantly pretending that I was a princess. I was constantly in a plastic crown and plastic high heels and a dress and demanding people call me a different name. I could spend hours and hours, by myself, pretending. I think I always kind of wanted to be something different, grander. I also grew up watching a lot of Disney princess movies, which in hindsight I’m like, ‘There aren’t always good messages for little girls in that.’ But that was very much how I grew up, watching those princess movies. There’s something very exciting and glamorous about this different life. Anastasia was one of my favorites. I actually think that’s 20th Century Fox, but she was pretty badass. She was sassy and figuring out her own life. I was pretty determined that I was something greater and bigger than just this girl from Nashville.”

And now you’ve created that!

“One of the best things about being an actor is hopefully, if the opportunity comes up, you can be anything you want to be. I always say my dream would be something like a Million Dollar Baby, where you have to really learn something else, learn to be somebody else that’s so different, that you might never, ever have learned or known. It’s such a privilege of the job if that comes up.”