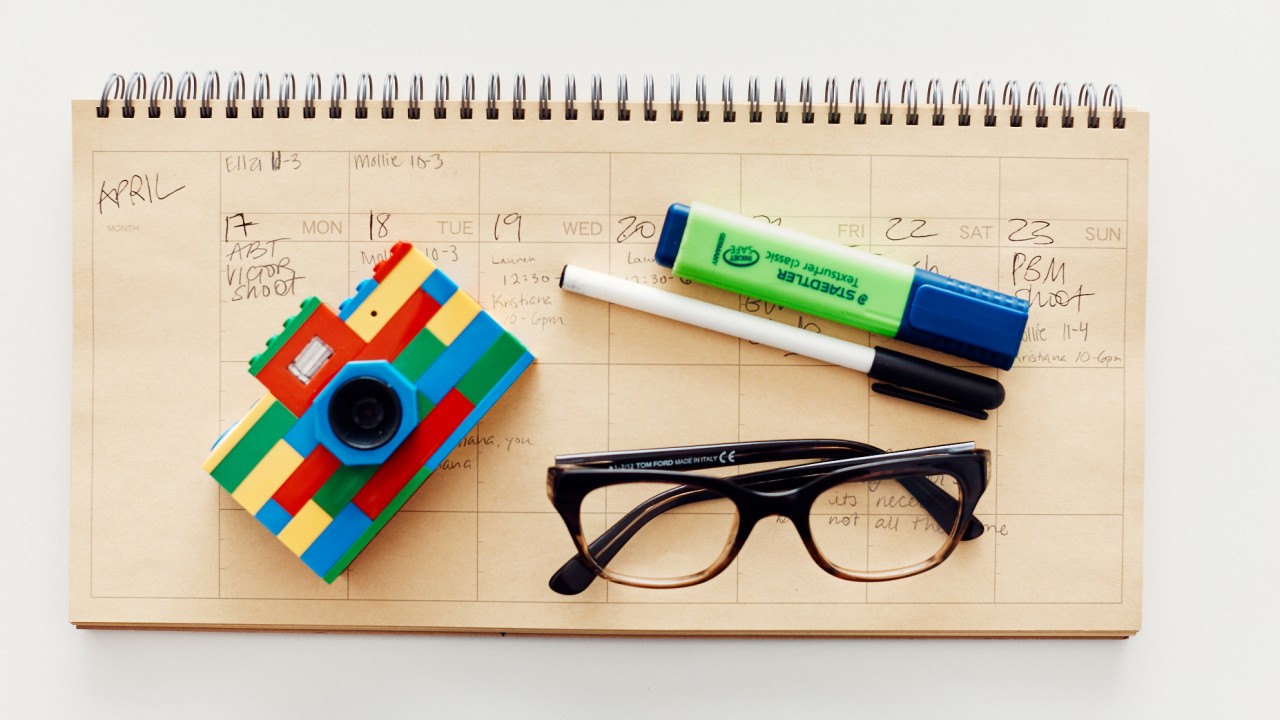 Mission Magazine is the industry’s first not-for-profit media company—and founder Karina Givargisoff is determined that we all pay attention.

“Disruptive” and “disruptors” are labels that fashion marketers love to throw around. Take a quick peep around the internet and you’ll probably find it on a magazine cover or five, and as language in multiple campaigns. Like “authentic,” it’s one of those terms that loses its meaning when, well, everyone is a disruptor—let’s face it, to actually be one, you need to be an anomaly. Which is exactly what Karina Givargisoff is.

The name should sound familiar; Givargisoff has been in the industry working as a stylist in her native London and New York for the better part of two decades. She assisted Alex White and Karl Templar, and, when she was 28, she became fashion director at The Face. The thing that makes her an anomaly, however, is that personal tragedy—the death of her mother and brother, and, much later, a friend’s breast cancer diagnosis—actually compelled her to look around and do that thing so many of us in the industry are too frightened to do: dig a little deeper and ask, ‘What can I do?’ Here’s the other thing that makes her an anomaly: She actually did something.

That something was launching Mission magazine, the industry’s first not-for-profit media company, where all profits from magazine and digital subscriptions go to a charity. The first issue, which is out now and focuses on female empowerment, comes in at more than 400 pages (something that, frankly, never happens these days), and features everyone from Alicia Keys and Lady Gaga to Melinda Gates, Christy Turlington Burns and cover star Tina Brown. If that wasn’t enough, the issue is entirely interactive, with video content overflowing over at missionmag.org.

Keep reading to find out why “harassing the hell out of people” is Givargisoff’s recipe for success, why Mission represents this millennium’s rebellious spirit as coined by The Face in the ’90s, and the founder and editor-in-chief’s four rules for the magazine (they’re simple and genius)—oh, and what “disruptive” really means to her. 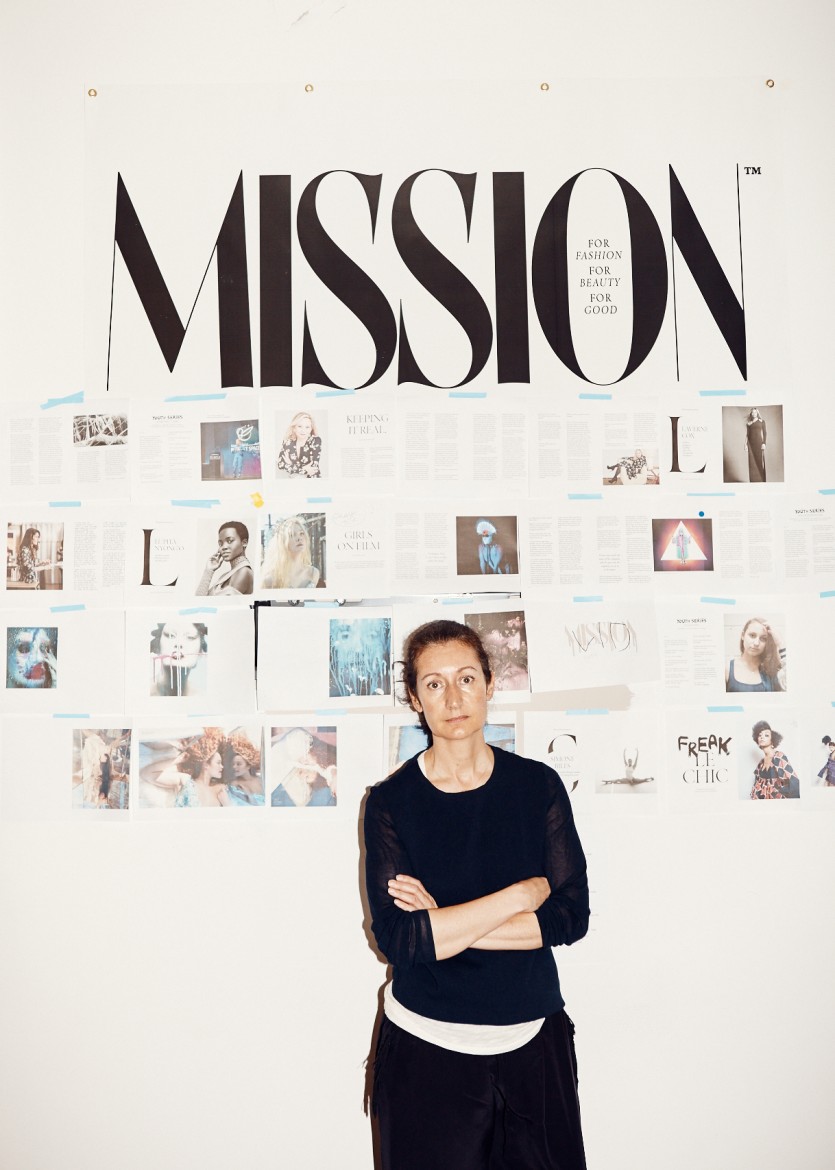 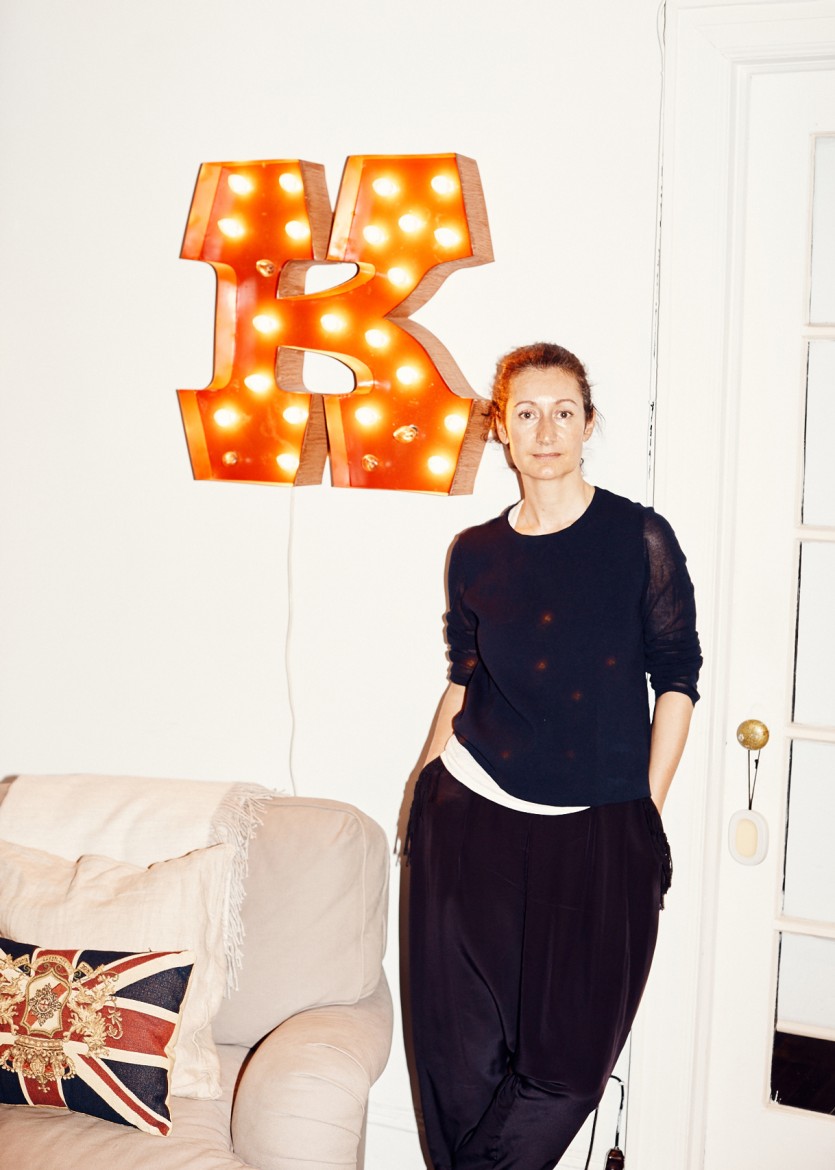 Why launching Mission was the hardest thing Givargisoff has ever done:

“It’s been so hard. I’ve done it all on my own. I had no idea how to build a magazine and a website. Three years ago, I was a stylist and you get given a couple thousand dollars to go shopping—that was the extent of my experience. I had to learn quickly. And it’s been tough because what we’re trying to do has never been done before—a magazine that’s interactive.”

Why she finally decided to *do something*:

“The real start of all of this, and why I came back to New York 15 years ago, is I lost my mom and brother within 13 months of each other, and they were both really traumatic experiences for me. In the middle of that, you’re expected to go to the shows and go on market appointments—and to experience something as personal as that changed my mind-set completely. I left London because it was too painful to be there. I carried on working, but my heart wasn’t in it. I kept struggling thinking, what else can I do? And then a friend of mine got breast cancer. She was diagnosed four years ago, but three years ago, during her first mastectomy, was when I thought of Mission. That morning I was really worried about her and lay there thinking, what am I good at? What do I want to do? I’ve always loved helping people—my mom was a nurse and my eldest brother had Down syndrome, so I’ve always been nurturing and giving as part of my family. I also didn’t want to chuck away 18 years of being in the industry. Mission comes from a really personal place for me. It’s not a vanity project, it’s not opportunistic.

“All of this comes from my own tragedy. Had I not had that personal connection, I probably wouldn’t have gone this far. But it’s been looming for 15 years—what can I do that’s different? And the technology side of things I find really exciting. I’m surprised that a big fashion title at a big publishing house hasn’t done what we’ve done. We’ve got articles with videos, music videos, and we’ve done a 360-degree, interactive fashion shoot that you can see on your phone. That was done on a budget—our whole issue was on the same budget of one cover shoot at a big title.” 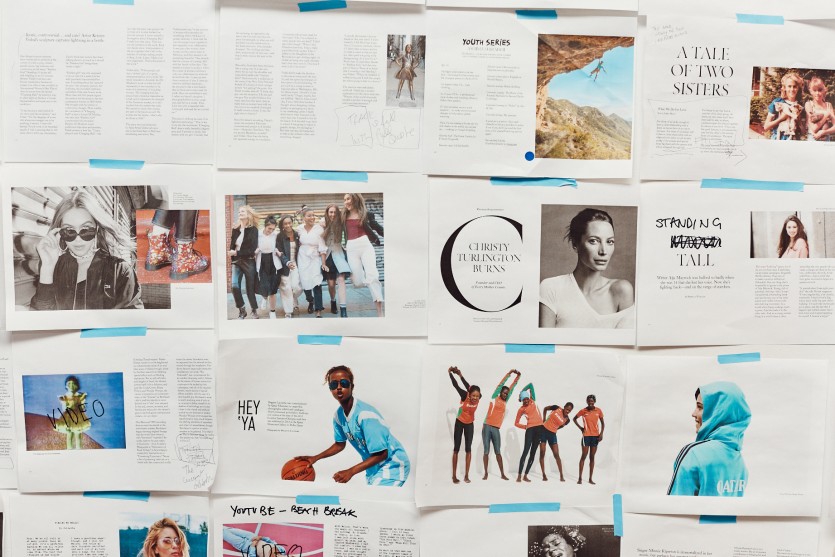 How she got so many big names to get involved:

“It’s honestly me just having the audacity and the cheek to harass the hell out of people. I’ve stuck by this motto for all of this: ‘If I don’t ask, I don’t get.’ The worst that anyone can say to me is ‘maybe’ because then I’m strung along without a clear answer. I’ve been really bold in saying, ‘You need to be part of this. Do you want to have a voice? Come on board.’ Anne Slowey has been really brilliant. She was one of my first bosses at Women’s Wear Daily 20-odd years ago. She was stepping away from Elle and wanted to be part of this. She told us how to structure our articles and suggested someone else to come on board.”

How Mission is providing a platform for those that want to speak up:

“This magazine will never be about the top 10 handbags or the new film a celebrity has out. That’s not our DNA and other publications do it brilliantly, so I don’t want to compete against that. If a celebrity has an incredible story to tell or they’re super passionate about mental health or the environment, that’s [wonderful]. I want people to have a platform to say something; and I want to have the balls to cover topics that publications here wouldn’t.”

There are world-famous hairstylists involved—but they’re not doing what you think:

“One article that I love is by the hairstylist Christiaan. I went up to his house in December and I don’t know him at all, but Val Garland, our beauty director, said he wanted to be involved. I thought that he would help us get supermodels and get hair stories, and I got to his house and he was like, ‘No, I don’t want to do that.’ I was like, well, this was a waste of a journey, but then he said, ‘I want to write about gender equality.’ I thought, okay, what’s that going to be like? I told him to do it, and it came in and it was brilliant.” 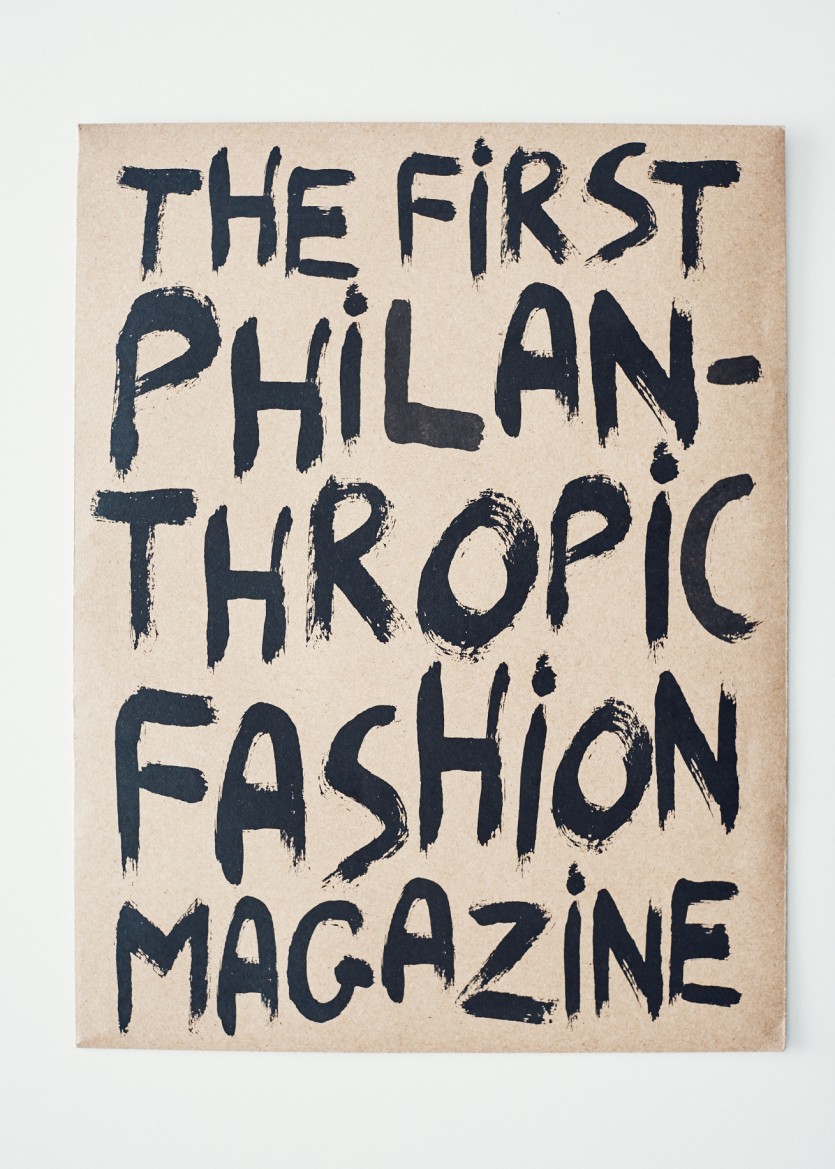 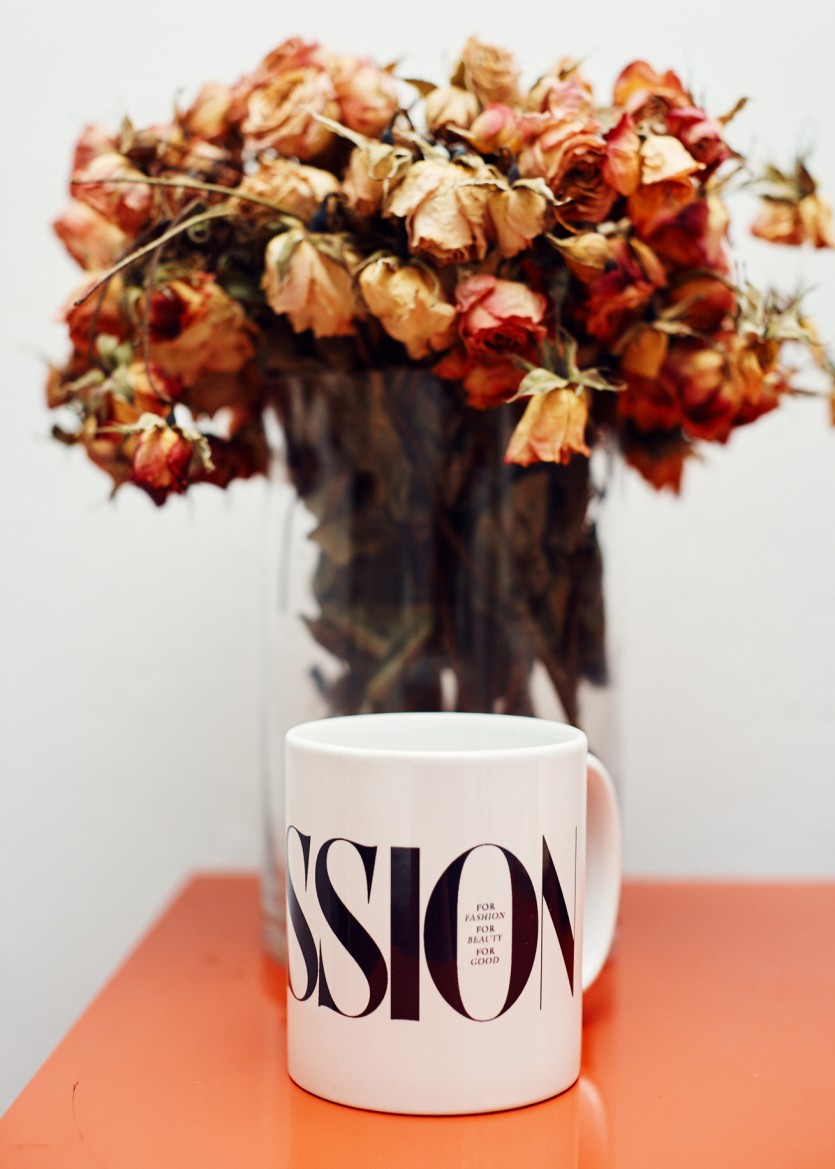 Why, for the time being, all donations will be directed locally:

“We cover our operating costs and then give the rest of the profits to charity. We have a board and each charity will be carefully vetted. I don’t want Mission to just write a check. That’s the basic bones of the brand. I had thought I wanted to donate the money to India—it’s always been a passion of mine to support women there. But as a startup, it didn’t make sense because we didn’t know NGOs in India. So with the launch issue, the best solution for me was keeping it domestic. Our office is five blocks from the Lower East Side Girls’ Club, so giving them a portion of the profits was the best way I could think to help. Also, being English, I think there are a lot of problems in America, and they’re not talked about. And I thought, why are we sending money away when there’s an enormous poverty crisis here. There’s sex trafficking in America! Why is this never spoken about? Everything is swept under the rug. For the first couple of issues, until we have great NGOs in place, we’ll be donating domestically.” 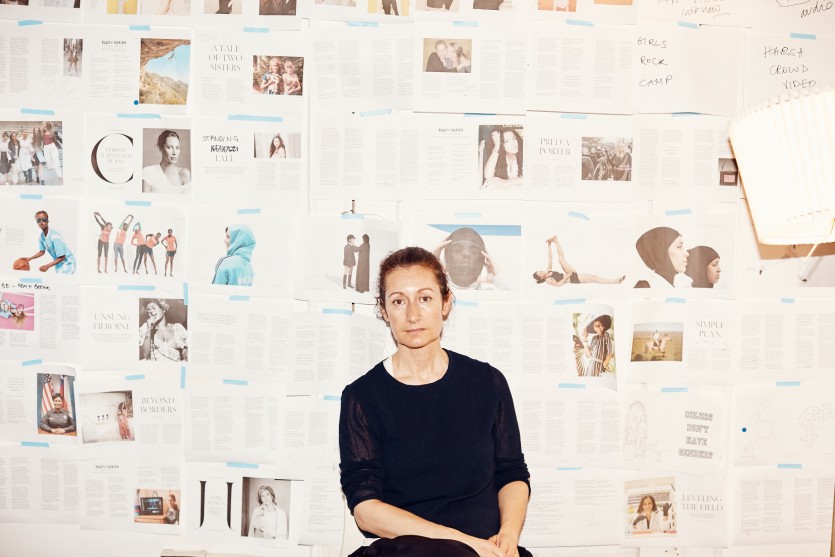 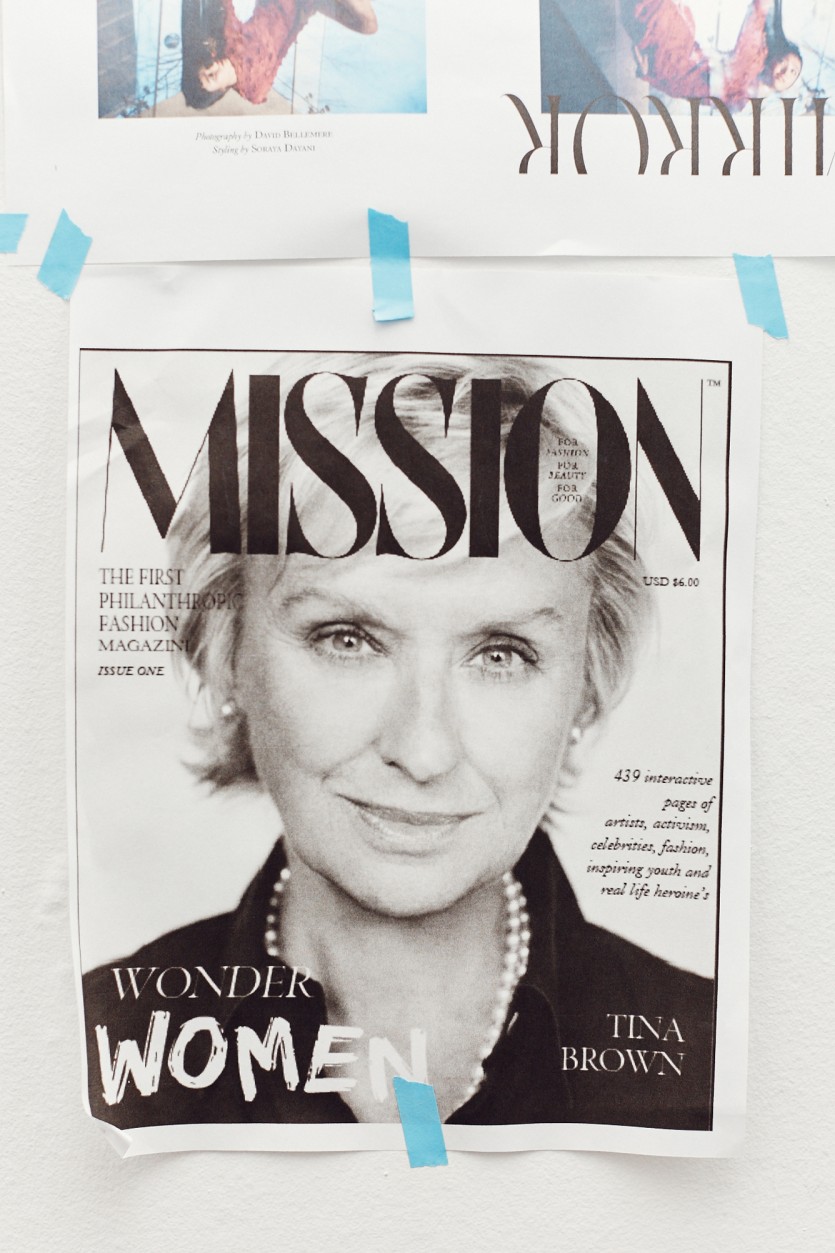 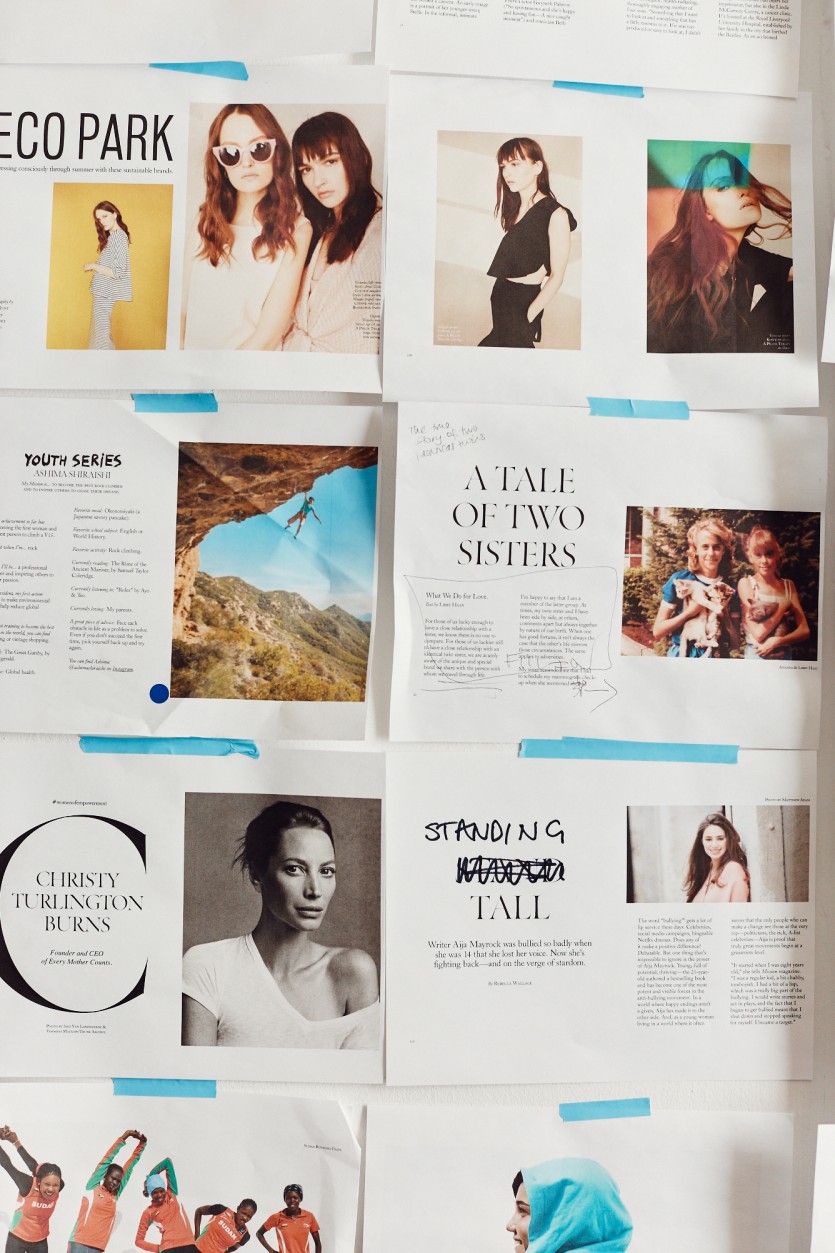 Why she sees echoes of The Face in Mission—and why both are disruptive:

“I used to work at The Face years ago, and it was such fun, rebellious times, and I feel that there’s a lot of that in this again. It’s been so empowering for me to finally have a voice, and not be a stylist on a shoot where I’d had a muzzle on my mouth for 18 years. Now, because it’s for good causes, I can finally say, ‘No, I don’t want to do that,’ but also, ‘Yes, you need to be part of this.’ It’s exciting. I’ve just been able to be really cheeky, and I love that I’m getting away with it. We’ve been guerilla and scrappy; I really believe in being disruptive. I had a meeting last fall with a brand and they said they want to be disruptive. And I said, ‘But do you really?’ Your idea of disruptive and my idea are completely different. I want to cause people to sit back and think—always in a positive way, never to be depressing. If it’s not fun, it’s not worth it. It’s too bloody hard otherwise.”

The four golden rules of Misson:

“I have four rules for Mission: no assholes; no fur; no smoking; no nudity. I don’t want any egos on this because it’s too bloody hard to deal with.”