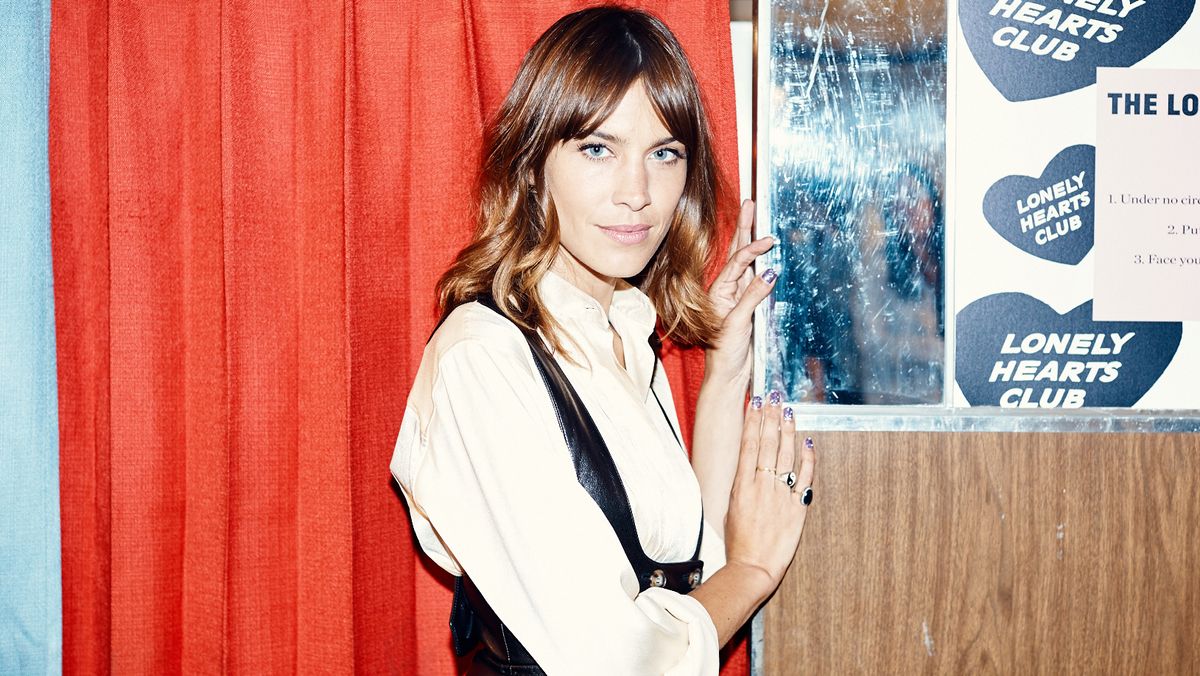 As long as she gets to wear her ALEXACHUNG hooded floral dress, of course.

At some point or another you’ve wanted to look like Alexa Chung. Don’t lie, I know it, you know it, we all know it—the thing that Alexa Chung irrevocably has and that we all want a piece of. There is this photo of her on Instagram, sitting on a broken TV on the sidewalk in the East Village, that single-handedly sent me on an hours-long online shopping spiral to identify the pair of boots she was wearing. I woke up the next morning, made a phone call and walked all the way down Fifth Ave on the rainiest day of the year to the Isabel Marant store on the Upper East Side. It was the last pair they had, they were on sale and in my size. I wear them all the time and I regret nothing.

Those online shopping spirals aren’t entirely necessary anymore because Alexa Chung has made her own line, ALEXACHUNG, with dungarees, pinafore dresses and platform mary jane heels. What makes her collection so appealing is that it’s made up entirely of things she would wear, consequently being a collection of things I, along with everyone else, have always wanted to wear and can now actually buy (without walking down blocks in the rain).

When I found myself at Bergdorf’s surrounded by her friends, her clothes and a photo booth whose instructions include “Kiss/make out/leave,” I decided to ask Alexa not just about her clothing but the situations she’d most like to see them in—one of them being my future wedding (I’m also not engaged but that’s also beside the point).

I played twenty (well, thirteen) questions with the designer-slash-model-slash-muse-slash-TV personality-slash-hilarious, brilliant person, and found out what she’d like to do to A$AP Rocky, what she’d tell Paul McCartney if she ran into him on the street, and what piece of ALEXACHUNG she’d wear to her wedding—and mine.

If your collection could be used as the costume design for a film–what would that film be?

“I would like to do costume design for a Gia Coppola movie. Already we look a bit similar. One time her mum, Jackie, mistook me as Gia from behind. I just really like her style and her taste and her eye and her movies. So I think that would fit in nicely. I’m sure she knows other people...like Rodarte. [laughs] But whatever!”

If you could travel back in time to gift one of your pieces to someone, who would you gift and which piece would you give them?

“Well, I’d probably give Marianne Faithfull...probably this ensemble that I have on actually. She was part Catholic school part punk, racy rock ’n’ roll muse. She would probably quite like this!”

Alexa Chung photographed by Weston Wells for The Coveteur

You run into Paul McCartney wearing your George [Harrison] Sweatshirt; what do you say when he asks “Why not me?”

“Weird! Well first I’d be like ‘Hi, Paul. What are you doing?’ I would say, ‘You could have been on my sweatshirt, but you were like four inches to the right and a bit below on the picture that my dad originally drew. All of the Beatles were included in that image originally. We cropped in on George only because he was the most colorful. So it was a toss-up between Paul and George but my dad had mastered George’s face in it better, so I thought in honor of my dad’s artistic prowess we kinda had to go with him! But I’d say ‘You know what, Paul? Come around my house in Hampshire and I’ll just make your version!’ I’ll just tell him when I see him...on the street! [laughs]”

You’re going on vacation and you can only pack one thing; what is it and where are you going?

“Probably just the jeans because you are always going to need that. I’m probably not going anywhere quite hot in those because it might get a bit clammy. Maybe I’m on holiday in Paris!”

Your first runway show was in a chapel–which one of your pieces would you not mind getting married in?

“The white cape dress, it is essentially a wedding dress!”

And if you had to marry someone, as in officiate a wedding, what would you be wearing?

“Oh if I was a vicar type person, like a nondenominational prince? I’d probably wear the floral hooded dress so I could add some drama to the occasion. I’d put the hood up and as the bride took the veil down, this is assuming it’s a women getting married…”

“Well, in this sick fantasy of yours....[laughs] I’d have to take my hood down at the same time you take down your veil, just to create a nice classic moment. Drama!”

If your severed hand hoop earrings could get a manicure anywhere, where would they go and what design would they get?

“They have had a manicure! Well currently they have red, which was a bit of a debate, but I’d probably go to Pampered Hands in L.A. and get them rolled in glitter, which is what I have right now. So they can match mine!”

You raid Queen Elizabeth’s closet; which piece of ALEXACHUNG does she own?

“The current one? A jacket with a headscarf. It’s a sick look. She wears that nowadays as she is a bit older. She’d like to wear that in her Land Rover driving around the countryside. It’s become somewhat of a uniform for her, so I think that would be the most iconic for her.”

If you could wear ALEXACHUNG for Halloween, who would you dress as?

“Ah, good question. Okay, I’d wear the red dress, I’d get a basket bag—I’m sure you can see where this is going—I buy a second one and cut it down the middle and I’d wear it on my shoulders as a cape and then I’d be Little Red Riding Hood!”

You’re going on a date with a celebrity crush; who is it and what do you wear?

“Well, I’ve been on dates with a couple celebrity crushes, and I usually just wear my dungarees. Out of this collection I’d probably wear the glittery pink dress, though! It’s flirty but also easy-breezy.”

“I’ve actually been cast in many music videos before I was a TV presenter, I was basically a music video...model...person. Holly Velance, I did. Mike Skinner ‘In the Streets,’ I did. Westlife, which was an Irish Pop band, I did. But in this day and age..I wouldn’t mind being in an A$AP Rocky video.”

What would your signature move be?

You can shop Alexa’s line ALEXACHUNG online or visit the 5th floor of Bergdorf Goodman on 5th Ave in NYC.